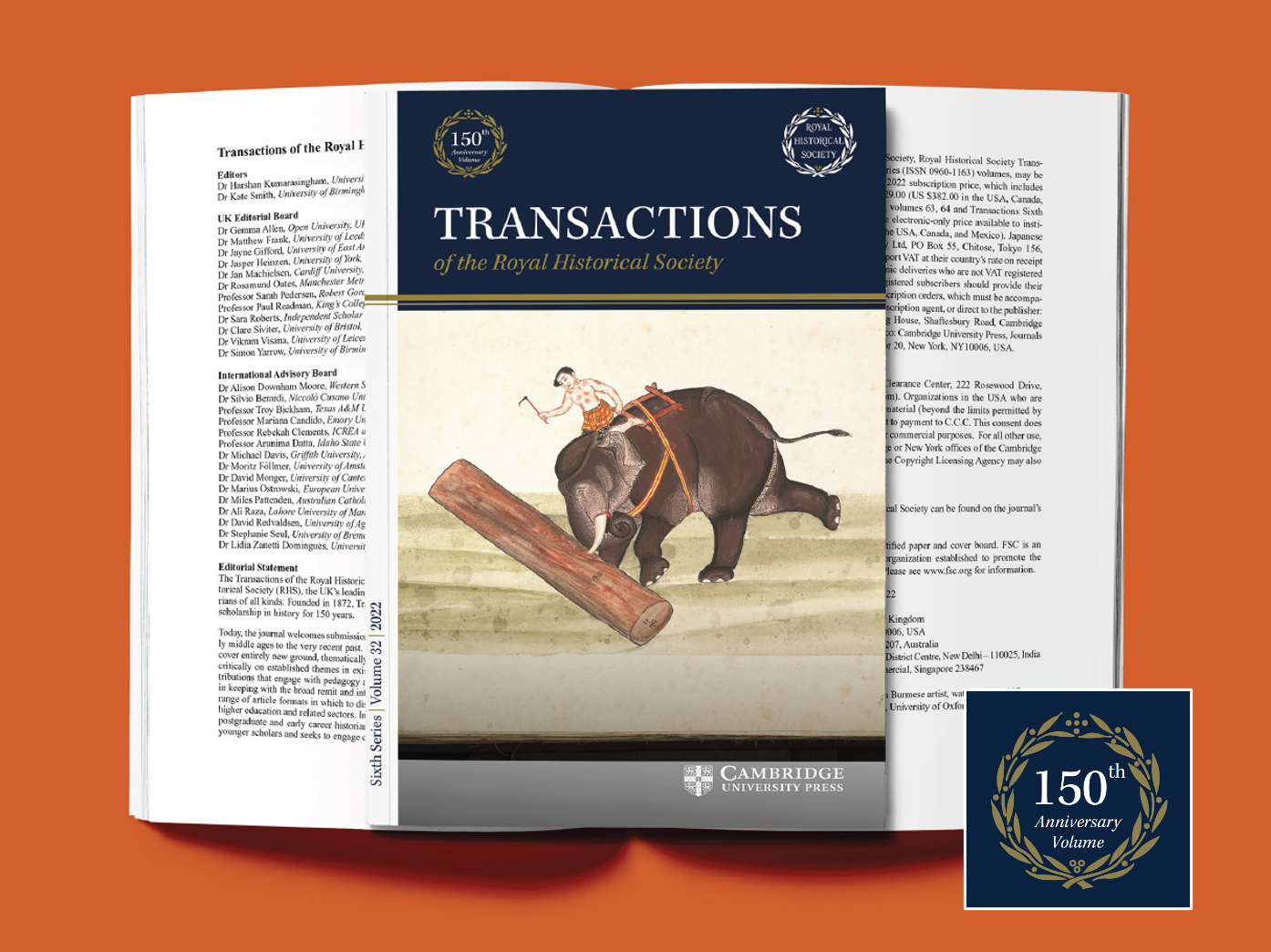 November 2022 marks the 150th anniversary of the first volume of Transactions of the Royal Historical Society, our academic journal.

A century and a half on, the 2022 volume of Transactions — published this month — also sees significant changes to the content, scope and design of the journal. In this post, the RHS President, Emma Griffin, considers the journal’s origins and some of its major developments since the 1870s.

In addition, Emma outlines the changes to Transactions from 2022: with a new editorial team, new design and a broader range of article types — as well as an invitation to all historians to submit their work for review and publication.

On 26 November 1872, members of the Royal Historical Society gathered for their annual meeting at the Scottish Corporation Hall, off Fleet Street, London. The Society was marking its fourth anniversary since formation, and was delighted to have recently received recognition ‘as “Royal” by Her Majesty the Queen’. A buoyant annual report described a year of ‘extraordinary’ growth and change, which included the election of 158 new Fellows and a popular new president, the former prime minister, Earl Russell. The minutes of the meeting also drew attention to the Society’s recent and successful foray into publishing, noting the ‘general satisfaction with the first volume of the Society’s Transactions’ which had recently been circulated to the membership.

The volume opened with an article by the Cork-based historian Louis de Vericour on ‘The Study of History’ which lamented the ‘absence of historical studies in British education’.

This publication was not, strictly speaking, the first occasion on which scholarly papers read to the Society had been made available in print. It did, however, mark the beginning of a more ambitious and structured approach to the Society’s publishing programme. In an editorial preface by Charles Rogers, the Society’s founder and self-styled ‘historiographer’, volume 1 of the Transactions of the Royal Historical Society promised ‘the recovery, from recondite sources, of materials which might illustrate the less explored paths of national and provincial history’.

The volume opened with an article by the Cork-based historian Louis de Vericour on ‘The Study of History’ which lamented the ‘absence of historical studies in British education’ and argued for the subject’s ‘dignity and pre-eminent utility … as a regulator of the human mind and as a teacher of Christian morality’. Members’ warm reception of this first volume of Transactions, as recorded on 26 November 1872, led the Council to ‘recommend that a volume of Transactions should be printed annually’. 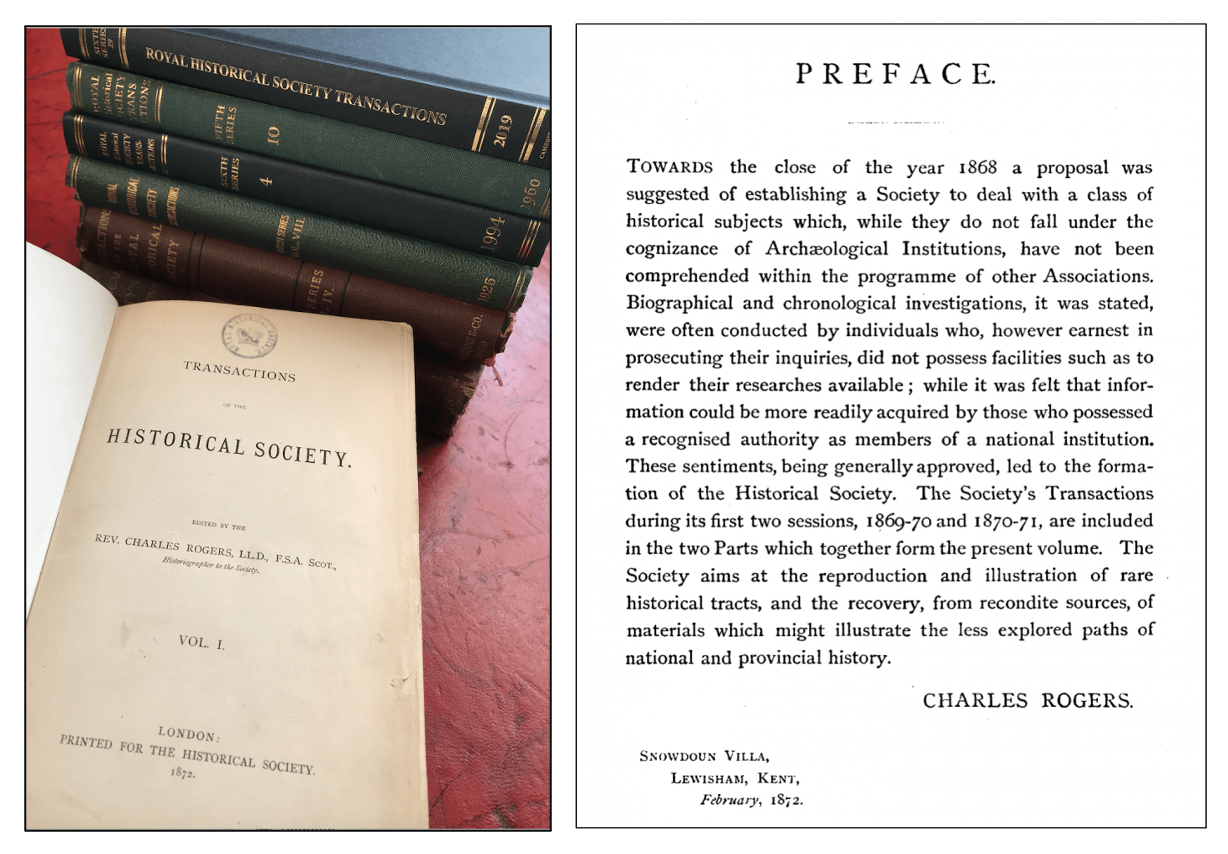 The title page from Transactions, volume 1 (1872) and Charles Rogers’ preface to this volume.

A century and a half later, Transactions of the Royal Historical Society is still going strong. Appearing fourteen years before the English Historical Review, and twenty-three years ahead of the American Historical Review, Transactions was a pioneer of the modern scholarly journal for history, and is the longest-published English-language historical journal still in existence. Since 1872, 145 volumes (including the latest in November 2022) have appeared across six series.

The Society’s growing professionalisation in the late nineteenth and early twentieth century was evident in the improving quality, ambition and regularity of its journal.

This longevity should not obscure the precariousness of the journal’s opening decades. As historians of the Society have noted, its early volumes were patchy in terms of academic distinction and there were breaks in publication, with no volumes appearing in 1875, 1879, 1883 and 1887–8. These years were also administratively difficult given the dominance of Charles Rogers, who had become an increasingly divisive figure. With Rogers’s departure, the journal’s fortunes began to improve. The Society’s growing professionalisation in the late nineteenth and early twentieth century was evident in the improving quality, ambition and regularity of its journal. These years featured research articles by the likes of Oscar Browning, Charles Oman and C. H. Firth, and publication of occasional studies on ‘The Progress of Historical Research’. Presidential Addresses were first published from 1893, and articles by university-based presidents – including Adolphus Ward (1900), George Prothero (1902–5) and T. F. Tout (1926–9) – made interventions on the scope, vitality and practice of the historical discipline.

From 1899, winners of the Society’s annual Alexander Prize had their essays published in Transactions, the first being Frances Hermia Durham, winner of the inaugural award for ‘The Relations of the Crown to Trade under James I’. Annual publication of winning essays significantly raised the profile of women authors in the early volumes of Transactions, with female scholars being recipients of the Alexander Prize on eight of twelve occasions to 1917. But prize-winning was not the only route by which women historians were able to publish in Transactions. Having presented her research as a paper, in 1895 Alice Law became the first woman to have a full article – ‘The English Nouveaux-Riches in the Fourteenth Century’ – published in the journal. There followed a steady rise in the number of women whose work appeared in Transactions, gathering pace in the second decade of the twentieth century, when one-fifth of contributors were women, and peaking at two-fifths in the 1920s.

The past decade alone is witness to a marked increase in articles situated beyond Britain and Europe, and focused on global connectivity, as well as (among other areas) histories of the body, disability, ethnicity, gender, materiality, selfhood, and studies of digital, interdisciplinary or community-based historical practice.

Subsequent developments in the journal’s history include the publication, since 1969, of the Society’s annual Prothero Lecture, and proceedings of conferences organised by the Society on topics such as ‘Christian Life in the Later Middle Ages’ (1991), ‘The Eltonian Legacy’ (1997), ‘Oral History, Memory and Written Tradition’ (1999), ‘Architecture and History’ (2003) and ‘Elizabeth I and the Expansion of England’ (2004). Throughout Transactions’ first 150 years, articles have reflected changing priorities in historical research. The past decade alone is witness to a marked increase in articles situated beyond Britain and Europe, and focused on global connectivity, as well as (among other areas) histories of the body, disability, ethnicity, gender, materiality, selfhood, and studies of digital, interdisciplinary or community-based historical practice. Contributions to the November 2022 volume likewise offer studies of, among others, Black history, environmental history, public history, and the intersection of historical research and the creative arts.

November 2022 is also an important point of departure for the journal and its future contribution to historical communications.

As an anniversary, November 2022 provides us with an opportunity to mark the origin, development and contribution of Transactions. At the same time, November 2022 is also an important point of departure for the journal and its future contribution to historical communications. This year’s volume signals a number of important changes to the aims, authorship and format of the journal. Until now, all articles published in Transactions have been read, by invitation, at meetings of the Society, prior to their publication in article form. This changed in 2021, since when the Society has welcomed submission of articles from historians worldwide, many of whom will not have opportunity to present their research as a Society lecture or conference paper.

The current volume is the first to include submitted articles, appearing alongside versions of RHS Lectures presented in 2021. In opening up the journal in this way, we seek to make Transactions more accessible to historians at all career stages, to those working collaboratively, and for practitioners in sectors beyond higher education. It’s our hope that publication of the 2022 volume encourages many more researchers to submit their work for review. 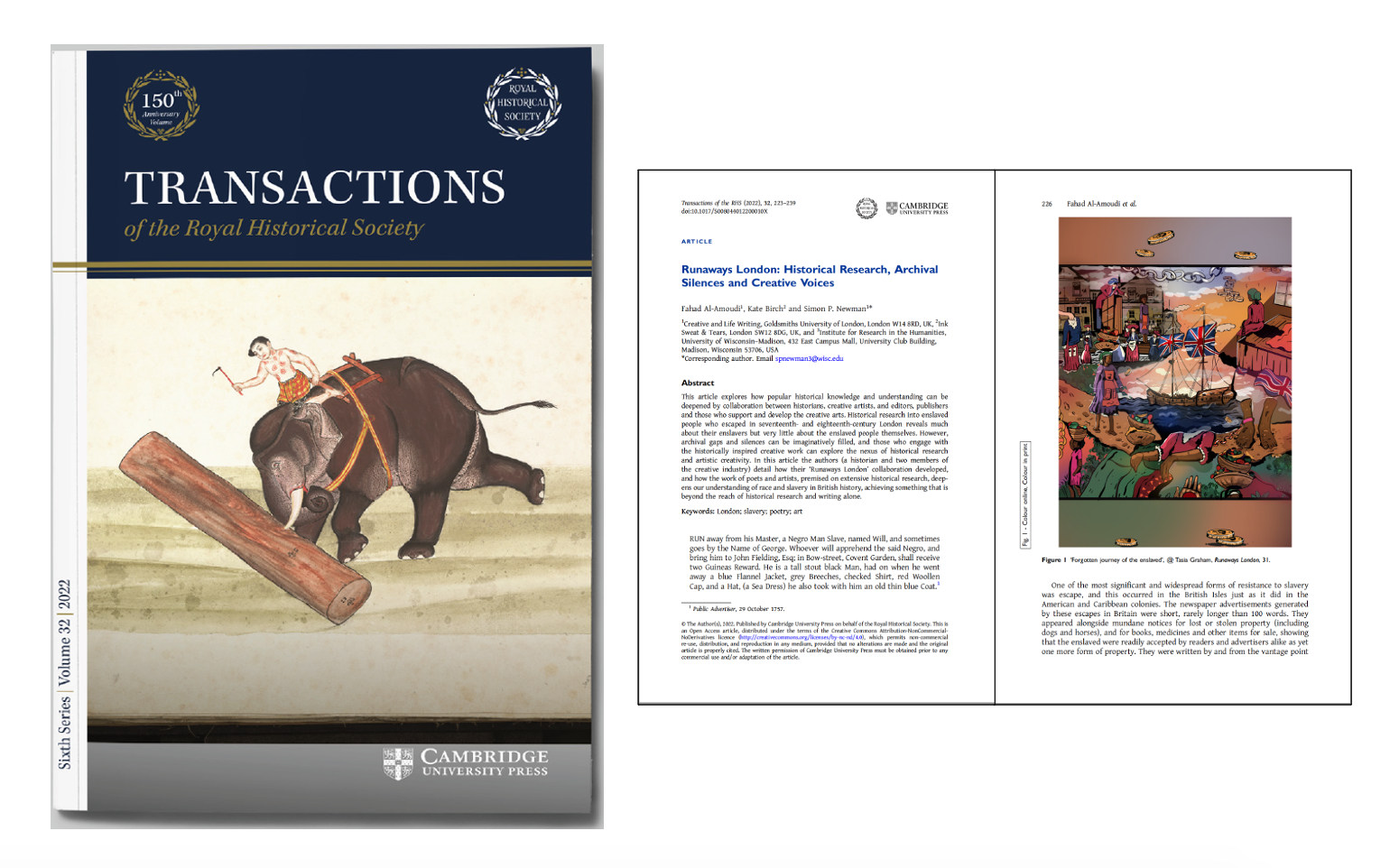 This year’s volume also sees important changes regarding editorship. From 2022 Transactions is edited not, as previously, by members of the Society’s Council but by an appointed team of historians with responsibility for the journal’s academic content and intellectual development. Earlier this year, the Society chose Dr Harshan Kumarasingham and Dr Kate Smith as the new editors of Transactions, supported by recently created UK editorial and international advisory boards. In consultation with these historians, the editors are currently rethinking aspects of the journal. This includes presentation of work in a wider range of formats (going beyond the traditional article type), and encouraging submissions that explore new research, methodologies, multidisciplinary perspectives, and historical practice both in higher education and cognate sectors.

The outcomes of these changes will become increasingly apparent from next year and thereafter, as the new editorial structure takes hold. In addition, Transactions has a new look and design, with use of a cover image to highlight one of the articles in this year’s collection. Now published in paperback print, from 2022 new Transactions articles are accessible – via Cambridge University Press’s ‘FirstView’ – weeks after acceptance, compared to the months that often elapsed before the annual November print publication.

These changes are in line with wider, ongoing work at the Royal Historical Society to make the RHS as responsive, engaging and meaningful as possible to a broad membership, while also remaining true to the scholarly standards that have long characterised the Society’s activities, including publishing. In a final innovation for this 150th year, Fellows and Members of the Society are now able to access the journal’s complete online archive – comprising 145 Transactions volumes and a sequence of more than 2,200 articles, which began, in 1872, with Louis de Vericour’s call to study history.

In a year that’s both an anniversary and new departure, we hope to encourage discoveries from the journal’s rich past and provide new opportunities to shape its future. 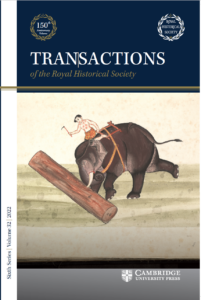 This article is taken from Emma Griffin’s ‘Introduction’ to the latest volume of Transactions (volume 32, 6th series) published online and print in mid-November 2022.

For more on the journal and how to submit an article for review, please see the Cambridge University Press website.

Professor Emma Griffin is President of the Royal Historical Society and Professor of Modern British History at the University of East Anglia.

Join Emma and panellists, on 6 December, for ‘Futures for the History Journal: Reflections and Projections’ 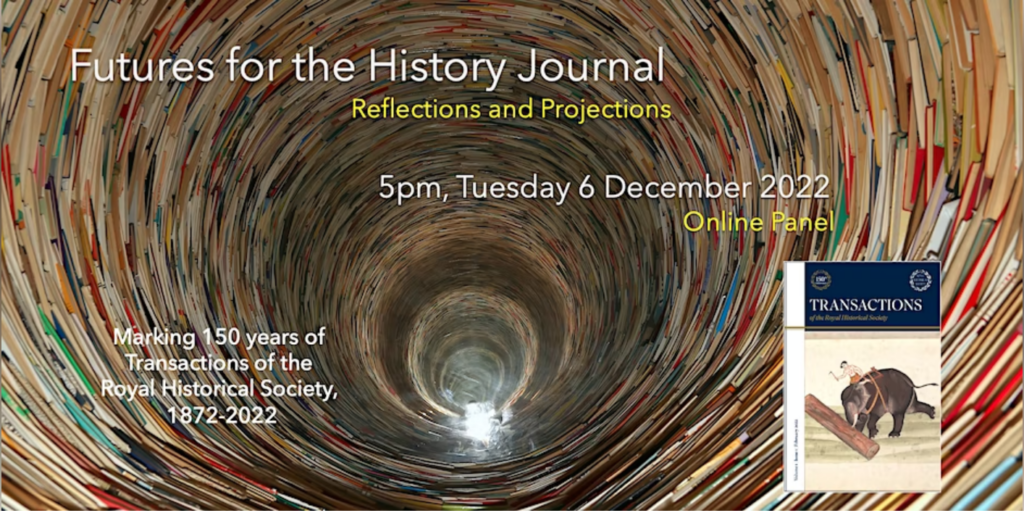 Journals have long been, and remain, central to the communication of historical research. As a publishing form, History journals have proved remarkably durable, with developments typically taking place within an established framework of article types and formats. At the same time, the very recent history of History (and other) journals points to quickening and more disruptive change — most notably in terms of online access and publishing models; but also with reference to innovations of form, tone and purpose.

In ‘Futures for the History Journal’, a panel of UK and US historians associated with leading journals (as editors, publishers, innovators, authors and readers) consider the extent, impact and possible outcomes of these recent changes. At an important time for Transactions of the Royal Historical Society, we’ll also explore how far journal publishing fits with current research and pedagogical priorities; and what innovations our panellists — and you — propose as ‘Futures for the History Journal’.