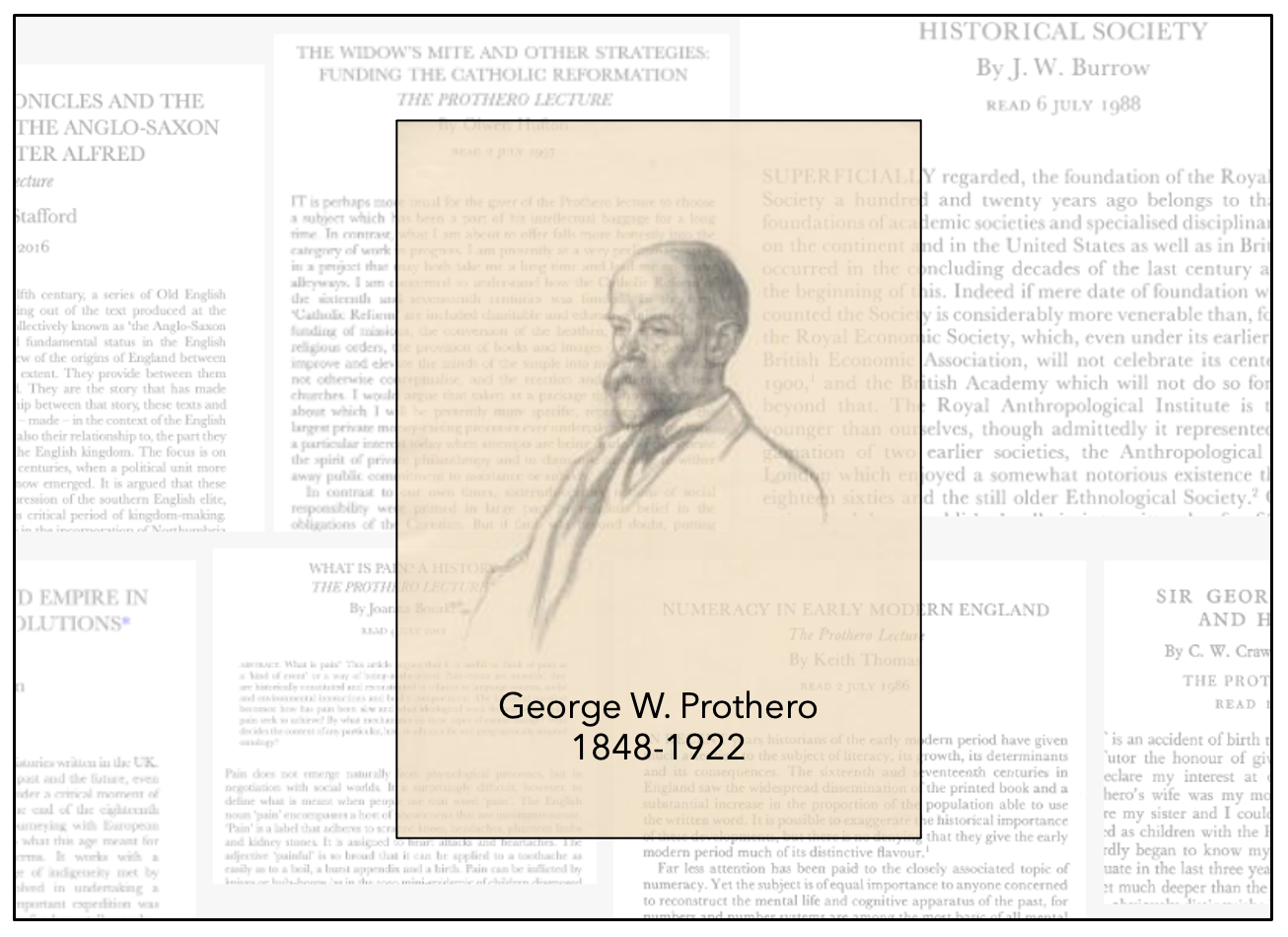 10 July 2022 marks the centenary of the death of George W. Prothero, historian, editor and President of the Society between 1901 and 1905.

A prominent member of the RHS in its formative years—and especially the early twentieth century move to professionalisation within the discipline—Prothero’s presence and influence endures, not least with the Society’s annual Prothero Lecture delivered each July.

Sunday 10 July 2022 marks the centenary of the death of historian George W. Prothero–President of the Royal Historical Society between 1901 and 1905.

A prominent member of the RHS in its formative years—and especially the early twentieth century move to professionalisation within the discipline—Prothero’s presence and influence endures. Following his death, a selection from Prothero’s extensive library was gifted to the Society, and remains on open shelf in its office at University College London. Prothero’s papers are also housed in the Society’s archive, and are available for public use, having been recently re-catalogued in a project completed in January this year. And with the annual Prothero Lecture his name has been a fixture of the Society’s events programme for more than 50 years.

A section of Prothero’s Library, housed at the Society’s office.

First delivered in 1969, by Prothero’s nephew C.W. Crawley, the Lecture has since been given by a range of leading historians, among them Joanna Bourke, Linda Colley, Stefan Collini, Natalie Zemon Davis, Olwen Hufton, Sujit Sivasundaram and Keith Thomas. This year’s Prothero Lecture (delivered on 6 July) was given by Rohan McWilliam, whose subject—‘The Gaiety Girl and the Matinee Idol’—charts the rise of celebrity culture in Edwardian London. Long resident close to the West End, George Prothero’s attitude to London’s theatre-land remains uncertain. This said, his papers do reveal an enthusiasm for English pageantry, and his committee membership of the Village Children’s Historical Play Society.

Prothero was a man of several parts. First, the academic historian. In the later 1870s, he had overseen design of the Cambridge history tripos and was one of the first history lecturers appointed by the University in 1884. A decade later Prothero was appointed the first Professor of Modern History at Edinburgh and in June 1895 was elected a Fellow of the Society, joining its Council several months later and progressing to the Presidency on 21 March 1901. In office, Prothero’s achievement was to confirm and hasten the Society’s move to professional research practices of the kind he’d studied in Germany as a student. Speaking in 1926, the historian T.F. Tout described Prothero as the Society’s ‘second founder’, such was his contribution to its professional development. As Tout continued:

No President has ever shown more care and devotion to the interests of this Society …. He carried further the help which the Society had already given to promote advanced historical teaching.

Above all, we owe to his personal liberality and energy the beginnings of a library worthy of the claims that that science which, above all others, has most need of many books. He appreciated fully the new doctrine that the library is the laboratory of the worker at history.

By the early 1900s, Prothero was also engaged in his second career, as an editor of the Quarterly Review: a digest of articles relating to politics, literature, art, archaeology, philosophy and religion. The editorship signalled Prothero’s move from private research to a broader concern for the health and promotion of historical scholarship. This third professional strand encompassed a range of audiences. His Edinburgh inaugural lecture had addressed the question ‘Why should we learn history?’ and matters of purpose and approach informed his RHS Presidency during which he encouraged, in the words of his Times obituary, ‘new plans to encourage original historical work.’ Prothero the ‘public historian’ was equally conspicuous via his journalism and support for organisations like the Historical Play Society.

A final strand to Prothero’s career was government service. From 1917 he served as historical adviser to the Foreign Office and was central to preparation of extensive documentary materials ahead of the Versailles Conference, which he attended from early 1919. This work brought both rewards (Prothero was knighted in 1920) and considerable physical strain. The Times considered this his least known but most significant professional contribution: the public being ‘hardly aware of the quality and value of his war work or of the extent to which he sacrificed his health from sheer patriotism.’ 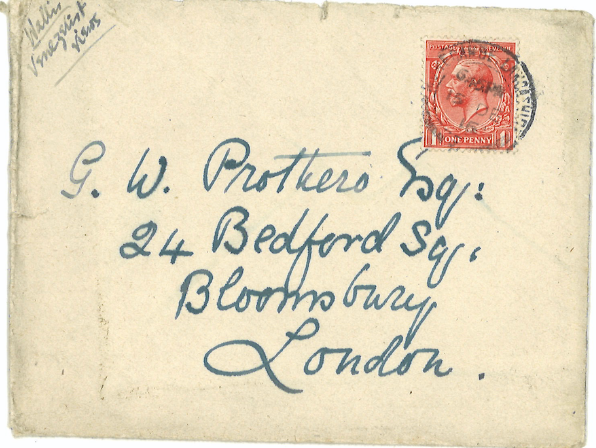 On stepping down from his leadership of the Society in 1905, Prothero continued as one of its Vice-President for the next seventeen years. He died on 10 July 1922 at his home, 24 Bedford Square—a five-minute walk from the Society’s present-day office at UCL. His papers include an inventory and valuation, undertaken in 1918, of the complete contents and decoration of No 24, including a title-by-title listing of Prothero’s 6788 books and their arrangement through the house. 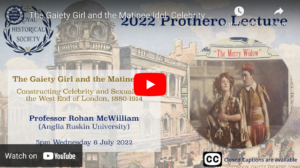 A new virtual issue of the Transactions of the Royal Historical Society includes 16 articles derived from Prothero Lectures delivered between 1969 and 2020.

The video of the 2022 Prothero Lecture, given by Professor Rohan McWilliam, is now available.