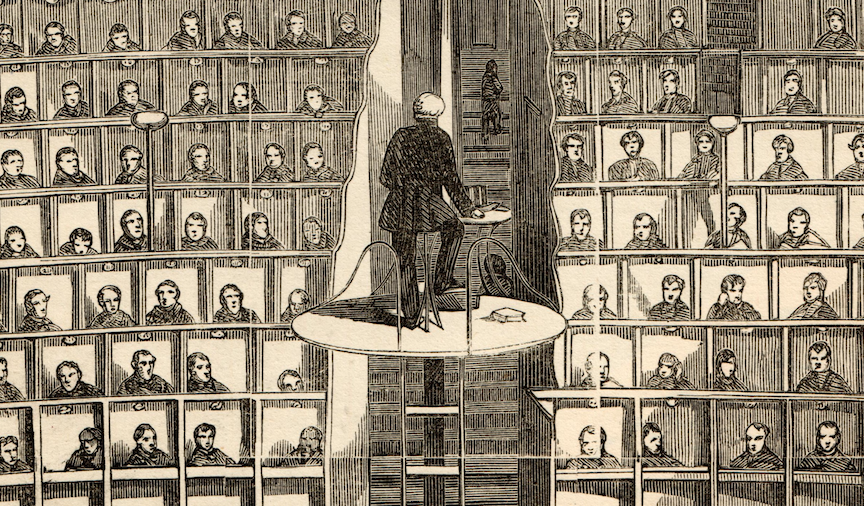 In July, Rosalind Crone was awarded this year’s Royal Historical Society’s Innovation in Teaching Prize, for the creation of Exploring the History of Prisoner Education, an open online course for the Open University which launched in October 2022.

The 8-session course surveys prison history and the place of education in that history, as well as providing educational content for those in secure environments.

As a free course, that’s also available offline, ‘Exploring the History of Prisoner Education’ is designed to address the impediments to higher education faced by many in UK prisons today. Here, Rosalind introduces her new course and its engagement with the challenges, and opportunities, of higher education in secure environments.

The first identifiable prison schools in England appeared in the second decade of the 19th century. In 1811, Thomas Price, chaplain on board the Zealand, a prison hulk stationed at Sheerness, stated that a school had been established on the ship and, as a result, ‘some of the ignorant are beginning to read’ (Holford Committee, 3rd Report, p. 169).

Four years later, the keeper at Warwick County Gaol enlisted the support of the Coventry branch of the National School Society to improve the school he had recently established for juveniles in the prison. Members visited the prison, and retrained the prisoner-schoolmaster in the monitorial method of imparting basic literacy. In about 1816, Andrew Bell, educational innovator and one of the pioneers of the monitorial method, visited Warwick Gaol and expressed his approval for the school. 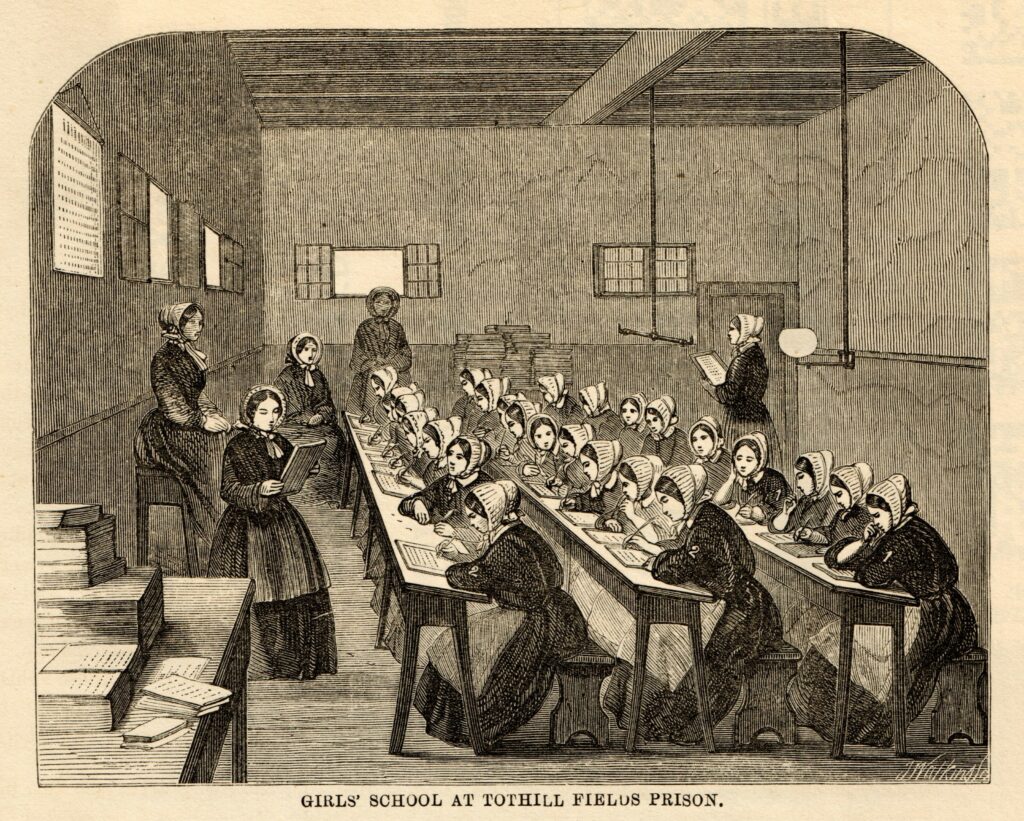 Early prison schools in England (and in Wales and Scotland too) focused primarily on instruction in reading, as a tool to support evangelisation in the first instance, and to civilise accused criminals more generally in the second. Over time, lessons in writing and even basic arithmetic were added to the curriculum.

By the 1840s, teachers at some prisons had begun to include lessons in history on their timetables. Again, history – or more specifically, Scriptural history – was regarded as a useful way to support prisoners’ understanding of, and interest in, the Bible. But it was also part of a more general secularisation of the prison school curriculum to improve educational outcomes and create more law-abiding subjects able to pursue more meaningful lives. History textbooks, including Pinnock’s, Gleig’s and Markham’s, were used in both local and convict prisons, while history books were acquired for prison libraries. In c.1862, it was reported that a female prisoner at the Brixton Convict Prison ‘devoted her leisure time entirely to the study of history, and considered it as an affront to be offered works of a different description’ (Female Life in Prison, II, p. 126). 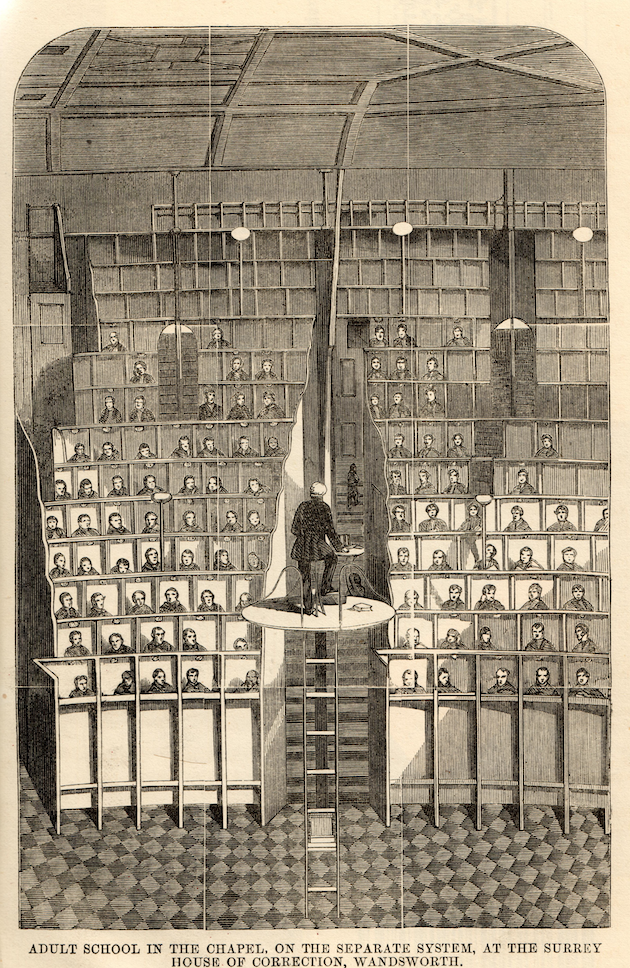 Adult School at Wandsworth, the only image of adult prison education from this date; Henry Mayhew’s ‘Criminal Prisons of London’ (1862).

Towards the end of the 19th century, while prison libraries continued to provide access to history for those ‘fortunate’ enough to have borrowing privileges, the official prison school curriculum in Britain was reduced to the delivery of basic proficiency in the 3Rs, namely reading, writing and arithmetic. Nearly 100 years later in 1972, The Open University (OU), a new institution with a radical approach to inclusivity in and the delivery of higher education in the UK began to offer modules and qualifications to men and women in secure environments. Currently (in 2021/22), there are about 1800 such students studying with the OU.

We know, from the personal stories of former prisoners who have studied with the OU, from projects such as Time to Think, which highlighted the pivotal role of political prisoners’ experiences of OU study in the Northern Ireland Peace Process, and from recent data collected by the Ministry of Justice and Prisoners’ Education Trust, that any learning, and especially higher learning, can make a difference both to individuals and to wider society. However, the provision of education in prisons is not (and never has been) straightforward.

Take, for example, the move towards blended learning and the increasing use of Virtual Study Environments (VLEs). The OU rose to the challenge through the development of Virtual Campus, a secure, web-based learning environment which provides access to a version of the VLE for most modules available to students in secure environments. However, access to Virtual Campus is dependent on access to the computer room (including officers to unlock and escort), or on personal computing devices in cells (still few and far between). All OU students in prison continue to receive an offline pack which includes all their study materials. Outside the prison, history students are enjoying a digital revolution, with online access to many books and journal articles not to mention a plethora of collections of primary sources. Inside the prison, there is no access to these internet resources, and so the study of history remains in a digital dark age. We have worked hard at the OU to ensure that our undergraduate history modules and qualifications continue to be available to students in secure environments. To date, we have not been able to do the same with our postgraduate history qualifications, despite having just produced a new MA History which can be studied almost entirely without having to visit, in person, libraries and archives.

There are other constraints. Although prisoner learners can apply for student loans to cover module fees, they must be within six years of release to be eligible, excluding many who might otherwise benefit from study. Moreover, they must be registered for a qualification. Access modules – designed for those without pre-existing qualifications (such as A-levels) or for those who have not studied for a long time – are not covered by student loans. The system works against those who wish to dip their toes in higher-level learning before committing to an expensive degree. In the post-pandemic environment, the number of opportunities to experience free higher-level learning, such as that offered through Prison-University-Partnerships, have declined.

It is in this context that I have recently launched a new Badged Open Course, Exploring the History of Prisoner Education, on the Open University’s free-learning platform, OpenLearn (and with an accompanying YouTube introduction). Based on my previous research into the history of prison education, the course has four aims:

With funding from the Arts and Humanities Research Council, the course was developed in collaboration with Prisoners’ Education Trust and several former prisoners were recruited as paid members of the production team. While drawing on decades of OU experience in producing high-quality distance learning in history, the production team were also eager to build in as much flexibility as possible.

The course comprises eight sessions, but there is no time-limit for completion, and as far as possible the learning materials have been deigned to be studied within the confines of the penal environment. It is available both through Virtual Campus and as an offline pack. While transcripts of the audio-visual resources are included in the offline pack, the seven core videos can be delivered separately through in-cell televisions and, combined, function independently as a mini-series on the history of the prison, providing an additional means of delivering education to prisoners. 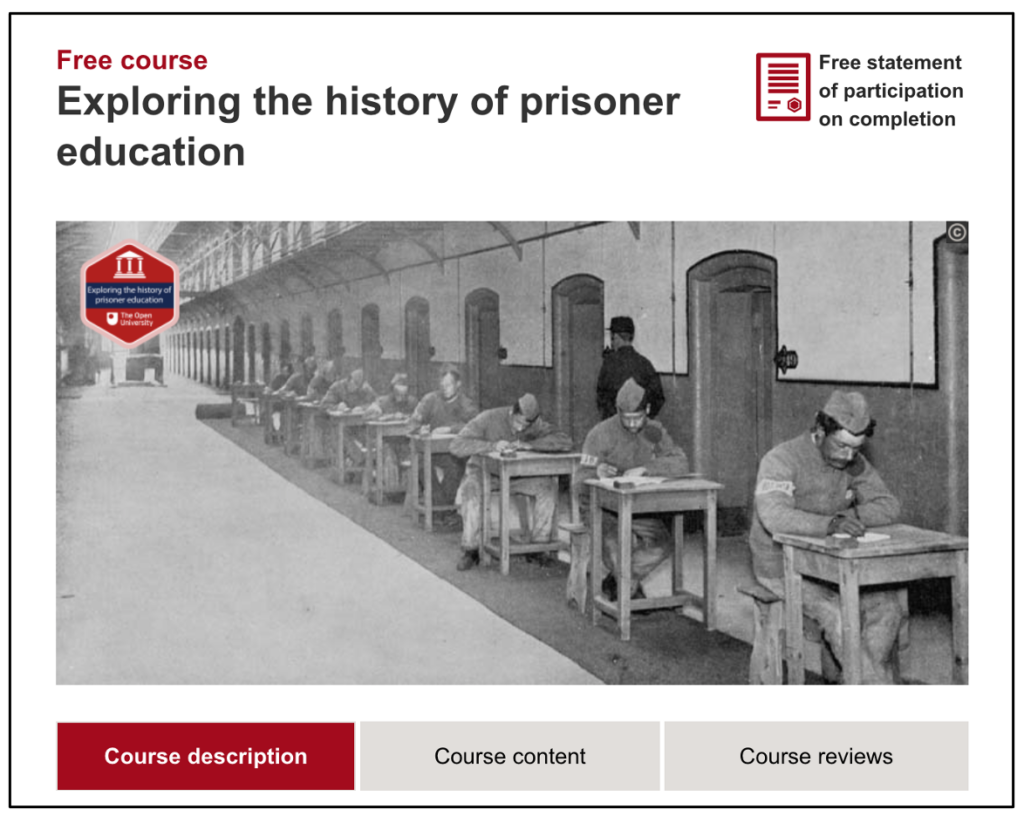 Should they choose, learners on the course are assessed through two computer-marked assessments, the successful completion of which leads to the award of a ‘badge’ (a form of accreditation which demonstrates the achievement of the learning outcomes). This badge can be used for continuing professional development purposes, or to gain credit towards YXM130, ‘Make Your Learning Count’, an OU level 1 module. With its 24 hours of learning, Exploring the History of Prisoner Education is a standalone course. Because it is offered for free, it is also available to other providers as a resource, to be incorporated into larger modules on the history of the prison, criminology, or law.

Covid-19, for example, has returned us to a new era of cellular instruction in prisons, while conversations about the deployment of new technology in prisons (in-cell devices), although well-meaning, threaten to keep us there.

While designed for prisoner learners first and foremost, we hope that Exploring the History of Prisoner Education will reach and enthuse other audiences and communities of learners. While promoting the potential of prison education, it also highlights the impact of the penal environment on the delivery of education in prisons, which has often been to the detriment of learning. Covid-19, for example, has returned us to a new era of cellular instruction in prisons, while conversations about the deployment of new technology in prisons (in-cell devices), although well-meaning, threaten to keep us there. Finally, my hope is that the award of the Royal Historical Society’s Innovation in Teaching Prize for Exploring the History of Prisoner Education will help to raise awareness among historians about an often forgotten community of history students in history (prisoners), as well as the innovative forms of teaching we can use to reach them and others. 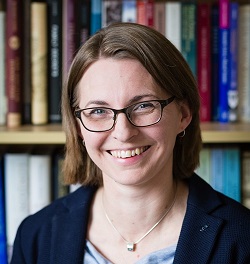 Rosalind Crone is Professor of History at The Open University. Between 2019 and 2022, she led the production of Exploring the History of Prisoner Education, a course available through The Open University’s free-learning platform, OpenLearn, which was based on her book, Illiterate Inmates: Educating Criminals in Nineteenth-Century England (Oxford University Press, 2022). She is also project lead for www.prisonhistory.org.

In July Rosalind was the awarded the Royal Historical Society’s Innovation in Teaching Prize, 2022, for her creation of the OU’s free course, Exploring the History of Prisoner Education, which launched in October 2022.

HEADER IMAGE, detail from Adult School at Wandsworth, the only image of adult prison education from this date; Henry Mayhew’s Criminal Prisons of London (1862).