To coincide with the release of her new monograph, Dr Sarah Fox introduces us to the multiple stages and community focus of Giving Birth in Eighteenth-Century England.

As Sarah argues, the cycle of eighteenth-century birthing began and concluded much earlier and later than the delivery of a child, and extended well beyond the confines of the birth chamber. Understanding birthing prompts us to reconsider historiographies of medical professionalisation and the means by which changes in midwifery took effect.

Sarah’s book, published on 13 April, is the 12th title in the Society’s New Historical Perspectives series for early career historians, with the Institute of Historical Research and University of London Press. As with all books in the series, Giving Birth in Eighteenth-Century England is available in print and as a free Open Access download.

In November 1767, a heavily pregnant Betsy Ramsden, wife of a Surrey schoolmaster and clergyman, wrote to her cousin Elizabeth Shackleton in Lancashire:

My new book Giving Birth in Eighteenth-Century England looks to understand birthing from the perspective of women like Betsy, using an eclectic range of sources that includes letters, diaries, recipe books, medical case notes, and objects. The book’s central premise is that across the eighteenth century birthing was a process – a series of linked and flexible stages – rather than an event. Birthing took place over an elongated timeframe of up to six weeks, and encompassed the late stages of pregnancy, labour, and the subsequent month of rest and recovery known as the ‘lying-in’ as well as the more commonly studied physical delivery of the infant. 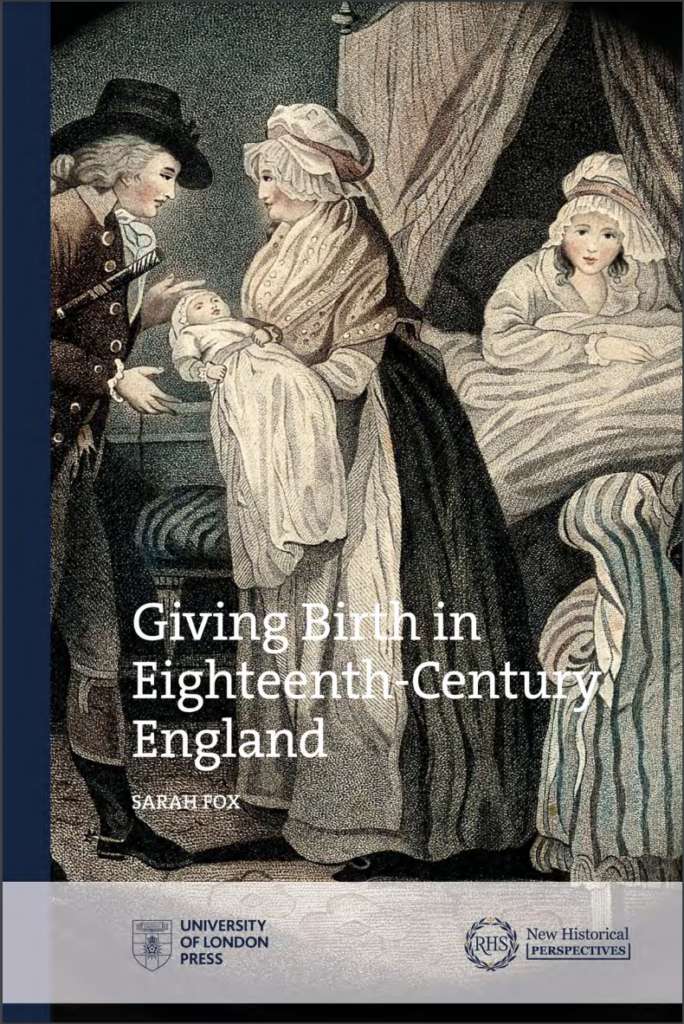 This shift in perspective allows my book to make two important interventions in the histories of birthing and midwifery.

First, it challenges narratives of the rapid professionalisation of childbirth during the eighteenth century by revealing a high degree of continuity in traditional birthing practices. This is not to say professionalisation and medicalisation did not happen; rather that these developments are diluted somewhat when considered as part of the longer process of birthing.

Second, this approach reveals the significance of practices that, from a medicalised perspective, appear peripheral to the delivery of an infant but were of great significance to the family and the community into which a child was born. This book therefore has chapters on space and materiality, on food and feeding practices, on family and emotions, and on community as well as on the actual physiological act of delivering an infant.

Growing bellies allowed the community to anticipate a birth, while the broadly observed rituals and practices of birthing provided a well-worn and familiar rhythm of visiting and socialising.

Extending the field of study to include the people, places and practices that surrounded birthing really emphasises the central place that birthing occupied in the creation of community, and in the operation of eighteenth-century society more broadly. Birth, this book shows, reached out far beyond the confines of the birthing chamber. Birthing and its rituals and practices created communities of neighbours, focused on the new infant and its household.[2]  Growing bellies allowed the community to anticipate a birth, while the broadly observed rituals and practices of birthing provided a well-worn and familiar rhythm of visiting and socialising.

When a woman reached her ‘time’, neighbours and family members would gather, to act as midwife’s assistants, to hear the first cry of the infant, to share drinks and cake, and to hold the baby and share local information. These gatherings could be quite disruptive, removing women from their central role in their own households to create a new, transient household centred around the birthing woman. 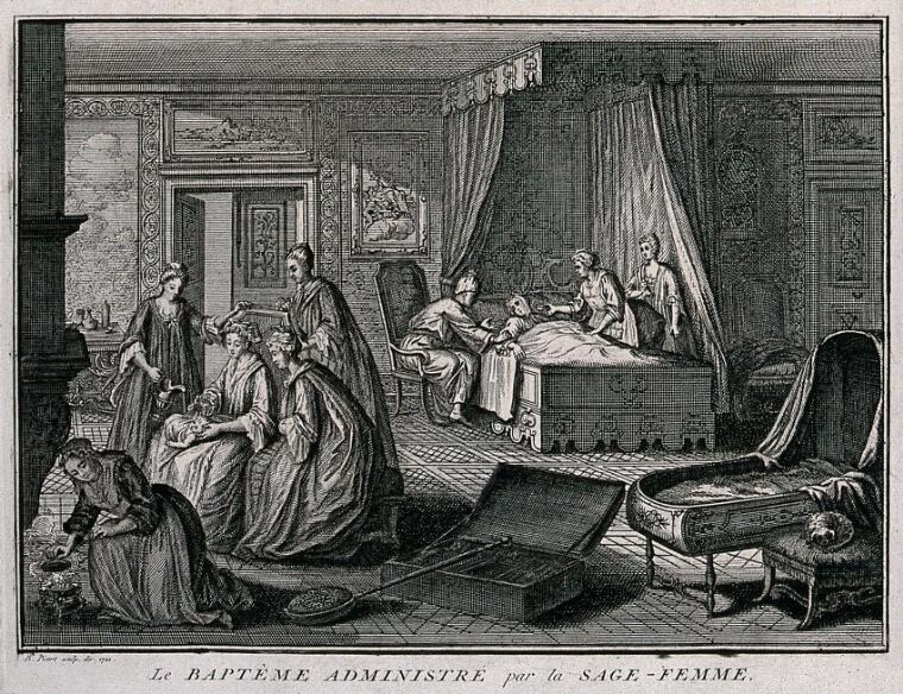 Bernard Picat. (1673-1733): A new-born baby being baptised by a midwife in the mother’s bedroom, Wellcome Collection (public domain)

The eighteenth century was a period of far-reaching and transformative social change. Demographic movement, rapid population growth, and a huge increase in the division between rich and poor saw the stratification of society and the physical removal of the upper social strata to grand Palladian mansions set in great estates and London townhouses. Such dramatic social change was sure to alter fundamentally the families and neighbourhoods that were so important to birthing.

Yet despite these demographic shifts, the birthing chamber retained its central role in shaping eighteenth-century society. The birthing chamber was, I suggest in this book, an important associational space. It defined communities, offering them opportunities to see and be seen, to practice and perform Christian notions of neighbourliness, and to build and maintain the networks that were so important to survival in this period.

The birthing chamber was also at the forefront of new perceptions of the body as accoucheurs or man-midwives sought to define a rational and anatomised vision of the human body using the physiological mechanisms of birthing. The appointment of accoucheurs to attend upon a birthing woman was often arranged during pregnancy, but upon arrival in the birthing chamber their authority and expertise became a matter for negotiation with the present midwife and her attendants.

My book reminds us that grand epistemological shifts … are often rooted in the much smaller, everyday interactions of ordinary people.

Located in these individual negotiations are much broader ones: over the medicalisation of childbirth, the place of the midwife in newly emerging medical hierarchies, and on ways of conceptualising and treating the birthing or newly delivered body. As such, my book reminds us that grand epistemological shifts — such as the changing nature of medicine and conceptions of the body in the late eighteenth century — are often rooted in the much smaller, everyday interactions of ordinary people. 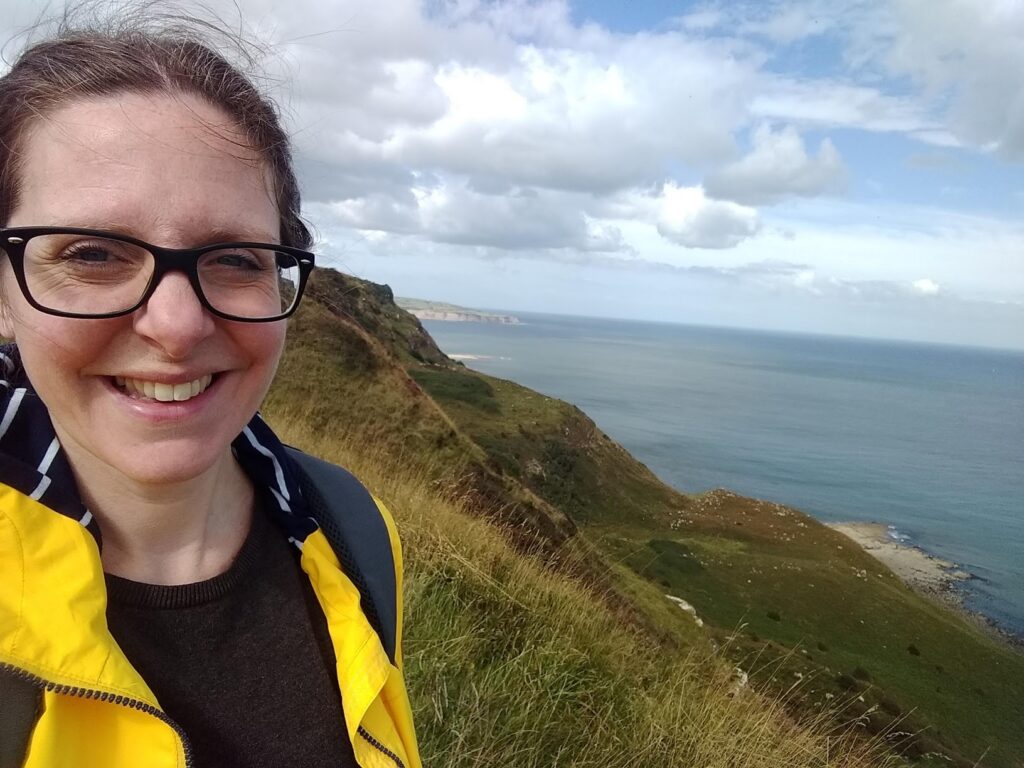 Sarah Fox is a social and cultural historian with interests in the social histories of law and medicine, the body, gender, food and community. She works as research associate on the Leverhulme-funded project Material Identities, Social Bodies: Embodiment in British Letters, c.1680-1820 at the University of Birmingham.

She is currently co-authoring a book on George III, his dining habits, and understandings of Britishness in the late eighteenth century, and is in the early stages of developing a new project exploring trust in eighteenth-century England.

About the New Historical Perspectives series

For more on the series, what it offers, and how to submit a proposal, please see the NHP page of the Society’s website.

Giving Birth in Eighteenth-Century England is the twelfth title published in the series. Other monographs and edited collections appearing in 2022 include:

HEADER IMAGE: A mother in bed after having given birth; the midwife showing the baby to the father. Coloured stipple engraving, c.1800. Credit: Wellcome Collection.