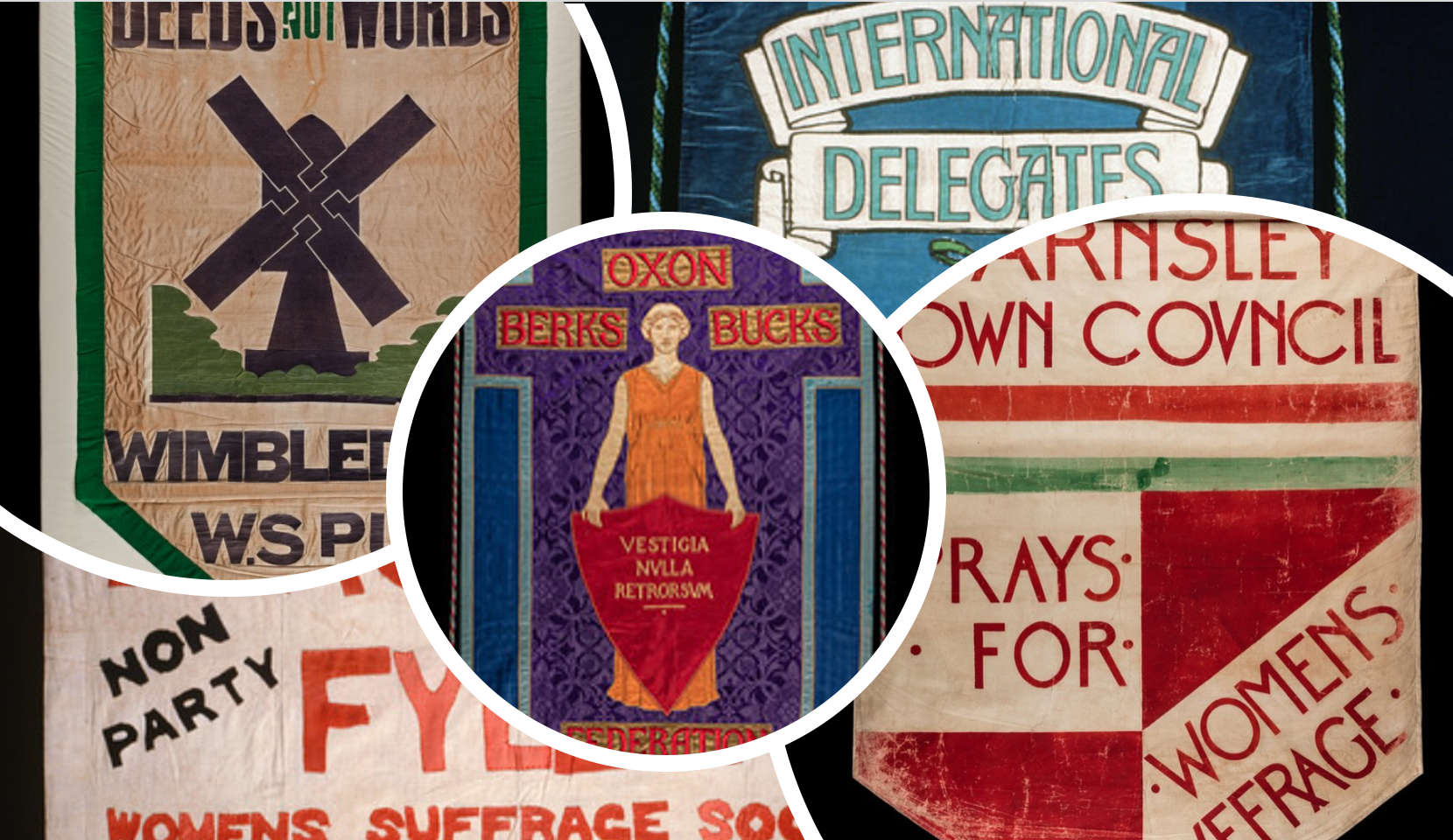 The Politics of Women’s Suffrage. Local, National and International Dimensions

From the Welsh countryside to the Moscow Comintern, from Ireland to Australia, from girls’ schools to the stage, women’s suffrage was the most significant challenge to the constitution since 1832, seeking not only to settle demands for inclusion and justice but to expand and redefine definitions of citizenship.

This collection shows us how women encountered and battled a hostile political climate, but pushed forward with determination, skill, tenacity and optimism: resonating with the renewed interest in women’s history and feminist politics today.

The Politics of Women’s Suffrage is now available as a free Open Access download and chapter-by-chapter from JSTOR Open Access. Print editions are also available to purchase, currently with a 30% discount.

The 2018 commemoration of the centenary of the Representation of the People Act generated huge public interest in the suffrage movement. It prompted exhibitions, plays, tours, statues and parades, many bedecked with the purple, white and green of the most famous suffragette organisation. But the centenary was also a time to reflect on the meaning and significance of the campaign for women’s suffrage, which went far beyond a single piece of legislation.

The suffrage movement represented the most significant and radical challenge to the constitution since 1832. Those involved sought to fundamentally alter the terms on which politics was conducted, by expanding and redefining the basis of citizenship. For decades prior to 1918, women had engaged in a political movement that sought to utilize and reconstruct the political system. The intention was to transform women’s place, status and prospects in other spheres, and so create a better and more equal world for women and girls.

In our new book—The Politics of Women’s Suffrage: Local National and International Dimensions—we seek to re-situate the suffrage cause first and foremost as a political movement, reaffirming Karen Offen’s insistence that the history of feminism is political history. Women’s political claims were inseparable from other contemporary political debates around home rule, workers’ rights, imperial relationships and male suffrage. But women’s politics did not only take place in the parliamentary chamber, the town meeting or the street corner. Rather, politics was embedded in women’s everyday lives. Women’s activism was linked to their life experiences and negotiated in relation to other commitments, including family obligations, friendship networks, and the demands of paid work and domestic labour. 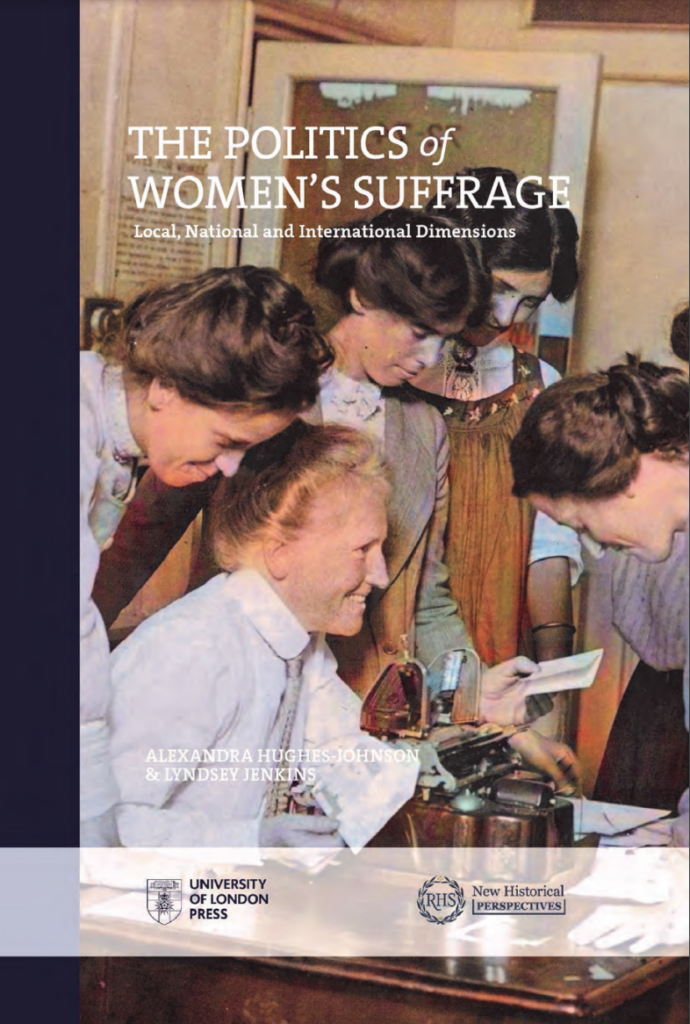 The thirteen chapters in The Politics of Women’s Suffrage examine how campaigners sought to achieve lasting structural change by navigating, interrogating, challenging and remaking the existing political system. Women attempted to redefine the nature of the political itself: shifting not only how politics was conducted and how the political system functioned, but also what counted as political.

One set of contributions focuses on how women worked within existing political structures. Jen Redmond, for example, demonstrates how women in Ireland utilised petitions as a campaigning tactic, while demonstrating that Irish political representatives took a far earlier and more prominent role in the debates than is usually recognised. Anna Muggeridge’s new analysis of the grassroots infant welfare movement reminds us that suffrage was only one of many political goals for women at this time.

A second set of essays examines how women sought to further their political objectives through social and cultural structures. Sos Eltis analyses how women brought their interpretations of class politics to literature and the arts, using writing and performance as a tool to confront the class structure as well as the gender order. Helen Sunderland takes the politics of suffrage into the classroom, conceptualising the school as a political community which encompassed pupils and alumni as well as teachers, and demonstrating the political capabilities of children through their own involvement in suffrage.

A third and final set of chapters examine how women worked within international political structures to achieve their objectives. Sharon Crozier-De Rosa points to new ways of writing political history in which emotions are made central through her investigation of suffrage and anti-suffrage relationships across the British Empire. Kate Connelly reconceptualizes the East End of London not as a one-off experiment but as inspired by existing radical politics in settlement houses and trade unions in America, insisting on the importance of feminist institution buildings. Susan Grayzel thinks through the importance of maternalism, militarism, and imperialism by placing the British suffrage campaign within a broader global history of women’s politics. Nicoletta Gullace concludes the collection comparing how the centennial celebrations of 2018 varied in Britain and America: not only paying close attention to the politics of race, but reminding us that democracy remains very much a work-in-progress.

Commemorations in 2018 took place against a turbulent political backdrop in which questions of gendered power and exploitation proved ever present. At the time, these were exemplified by the #MeToo and #TimesUp campaigns, and ranged from concerns about period poverty to the status of women housed at Yarl’s Wood, alongside a recognition of the disproportionate impact of austerity on women. In the few years since, the global pandemic has only exacerbated gendered inequalities, as the economic impact and caring responsibilities fell disproportionately on women, reduced women’s access to essential healthcare services—especially during pregnancy and childbirth—and saw a massive increase in domestic violence: all of which were magnified by racial and economic disparities. The appalling and ongoing demonstrations of institutional misogyny in the police are the latest reminder that the pandemic is far from the only crisis affecting women’s lives: our basic right to safety is still not secure.

The chapters that make up The Politics of Women’s Suffrage serve as a reminder of the power of the collective and the need for long-term commitment to structural change.

It is easy to feel isolated and hopeless at these times. But fundamentally, the chapters that make up The Politics of Women’s Suffrage serve as a reminder of the power of the collective and the need for long-term commitment to structural change. Just as suffrage was inseparable from other claims around women’s rights, education, work and family life, so today claims for women’s liberation and justice cannot be separated from broader demands for global justice: whether racial, environmental, economic, or in terms of healthcare. Suffrage campaigners understood the importance of active citizenship, political participation and grassroots organisation. Their legacy remains vitally relevant today. 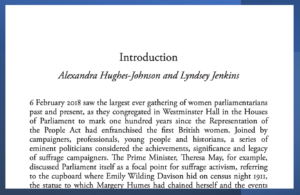 Alexandra and Lyndsey’s ‘Introduction’ to The Politics of Women’s Suffrage, along with each of thirteen essays and afterword in the collection, are available as free chapter downloads via JSTOR OA Books.

Alexandra Hughes-Johnson is a Research Associate at the University of Oxford and Research Portfolio Manager at the Economic and Social Research Council, UK Research and Innovation.

DISCOUNT OFFERS FOR HARD AND PAPERBACK EDITIONS OF THE COLLECTION

Alexandra and Lyndsey’s new collection, The Politics of Women’s Suffrage. Local, National and International Dimensions, is now available as part of the Royal Historical Society’s ‘New Historical Perspectives’ series, with the Institute of Historical Research and University of London Press.

Accessible as a free Open Access text, The Politics of Women’s Suffrage is also available in hard and paperback print and Kindle from University of London Press. Print edition discounts (of 30%) are available for all: in the UK, EU & ROW using the code VOTES30 from here; and in North America via University of Chicago Press using code RHSNHP30 from here.