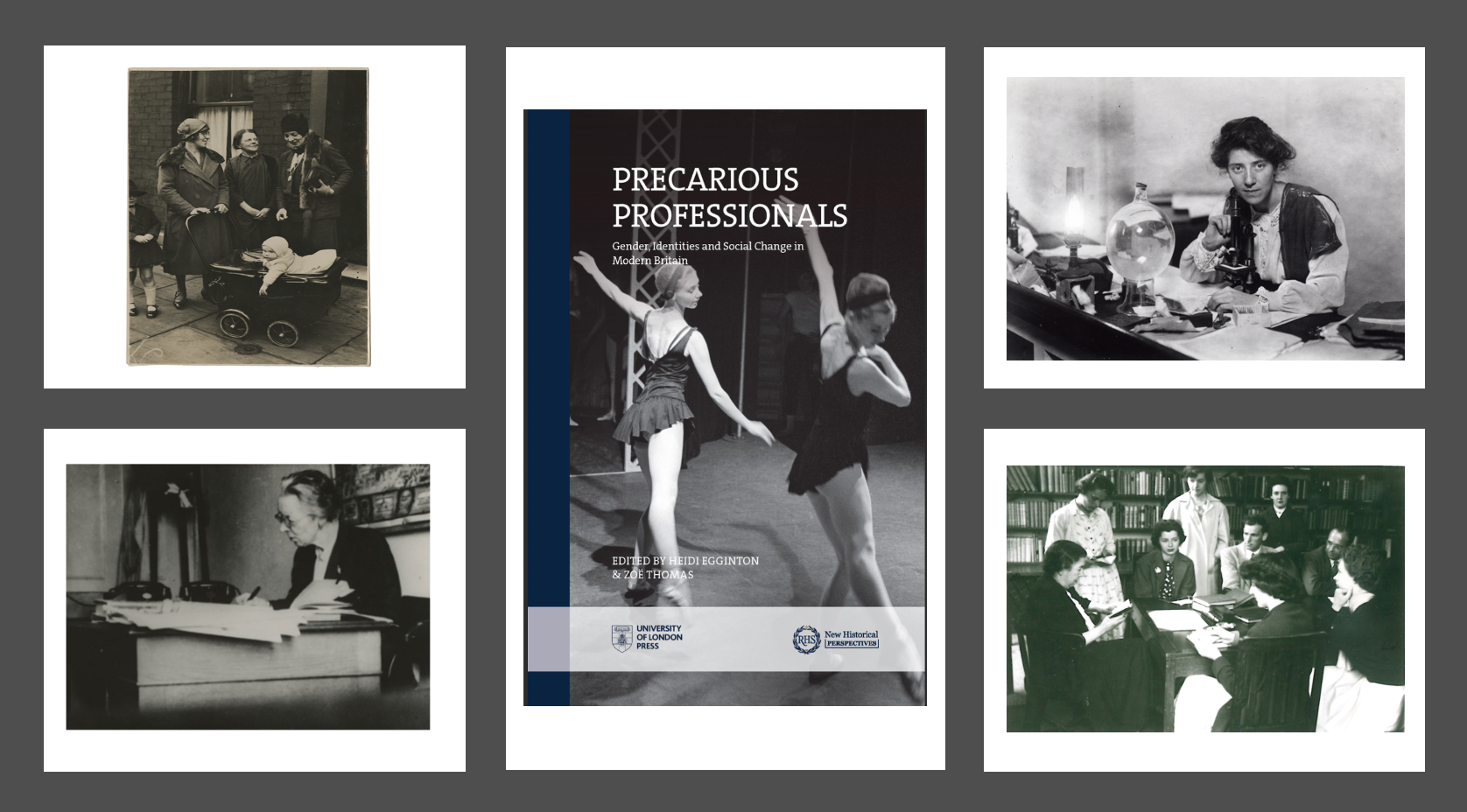 From pioneering women lawyers and scientists to ballet dancers, secretaries, historians, humanitarian relief workers, social researchers, and Cold War diplomats, the collection reveals how precarity was a thread woven throughout the very fabric of modern professional life, with far-reaching implications for the study of power, privilege, and expertise.

Precarious Professionals is now available as a free Open Access download and chapter-by-chapter from JSTOR Open Access. Print editions are also available to purchase, currently with a 30% discount.

We started working on Precarious Professionals in the autumn of 2014, when we were both exploring the role of women and gender in creative professions in Britain during the late nineteenth and early twentieth centuries. In our own research into the Arts and Crafts movement and the antiques trade we kept coming across examples of women who had defied conventional ideas about professional work, claiming and adapting professional identities as art workers, writers, interior designers, and valuers, despite often being excluded from the same professional spaces, training, associations or qualifications as their male counterparts.

We wondered: were these artistic women simply unconventional, or would we find similar stories in different fields and, if so, how would that change the way historians have tended to conceptualise professional identity? 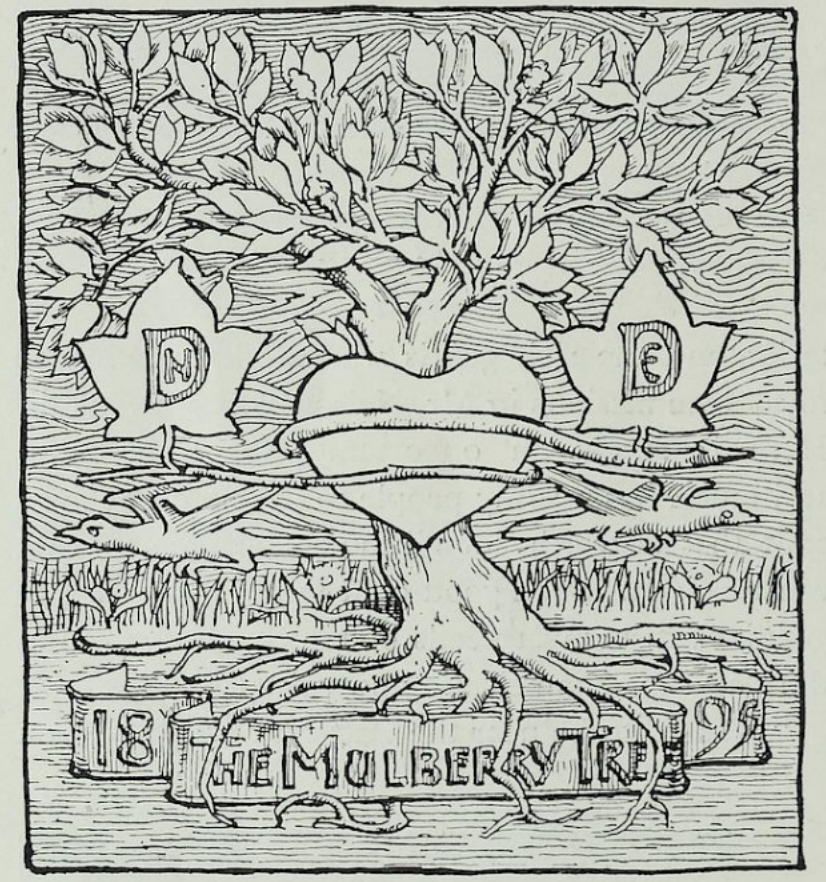 Zoë Thomas’s chapter explores the collaborative professional and marital relationship of Arts and Crafts metalworkers Edith and Nelson Dawson. Here we can see a design they produced together, which they used in the press and in personal documents to celebrate the collaborative nature of their activities. Image from “Interview with Mr and Mrs Nelson Dawson”, Studio, vi (1896), p. 178.

Together, we mined careers advice handbooks and interviews with self-described professionals, such as the Cambridge journalist Margaret Bateson’s Professional Women upon Their Professions (1895). Bateson showed that, in an era before women were legally allowed to enter conventional professions, and in which the term ‘woman professional’ still registered as a contradiction in terms, women were nevertheless capably assuming new identities in fields as diverse as dentistry, ballet dancing, and stockbroking. She aimed to challenge her readers’ assumption that ‘the choice for a young woman of good education and belongings lies between complete … obscurity on the one hand and the very highest distinctions … on the other’.

Yet women who engaged in professional forms of work in this period continue to be typically seen as exceptional pioneers, struggling parvenus, or members of so-called ‘semi-professions’, categories which the research of our contributors has revealed to be far more complex. 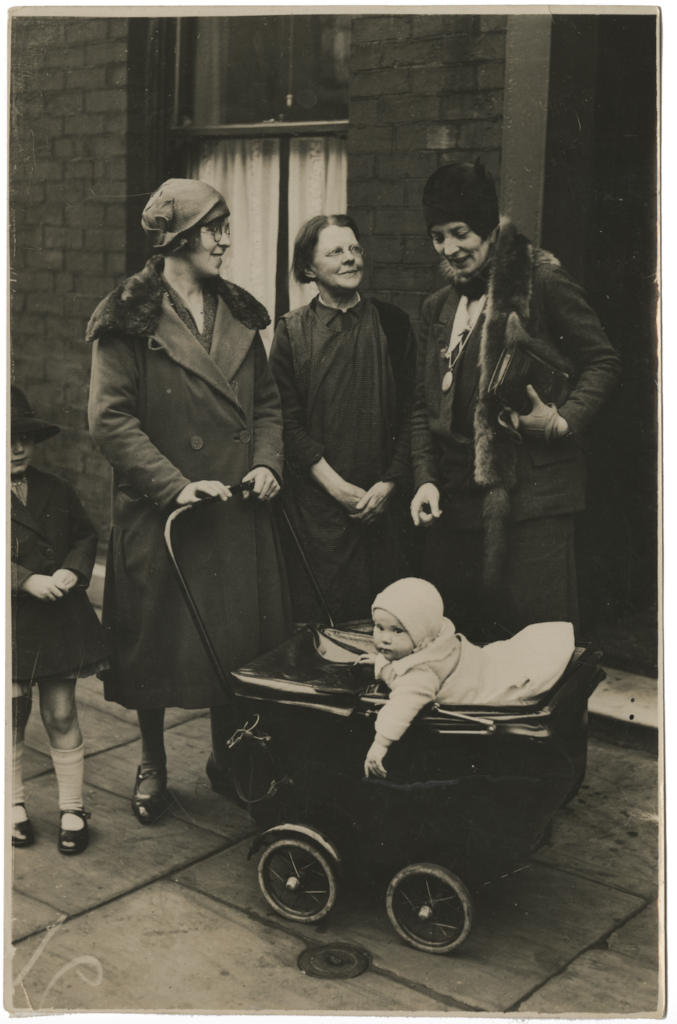 Molly Hamilton (1882-1966), on the right of this press photograph, moved in and out of the worlds of journalism, parliamentary politics, and the civil service throughout her career. Heidi’s Egginton’s chapter looks at the way in which Hamilton’s surviving archive represents her varied professional contributions. Image reproduced by permission of the Churchill Archives Centre.

There has been a tendency to discuss the meanings of professionalism by focusing on a narrow pool of traditional, male-dominated professions and linear career trajectories. Taking as the standard model professions like medicine or law, in which access to formal training, accreditation, and professional institutions guaranteed secure employment and closed off opportunities for the unqualified, divides workers into professional ‘insiders’ and ‘outsiders’, often along gendered lines.

The cultural biases which support these power imbalances are well-documented: in science, for example, the ‘Matthew Matilda effect’ describes the phenomenon where work by more eminent men is often judged to be stronger than that by lower-ranking women, even if it is produced collaboratively. The economic and social historian Joan Thirsk coined ‘Thirsk’s Law’ to highlight how the development of every occupation tended to proceed on the basis of gender equality until it was ‘institutionalised, formalised, and organised’ – then its direction and style inevitably fell ‘under the control of men’. 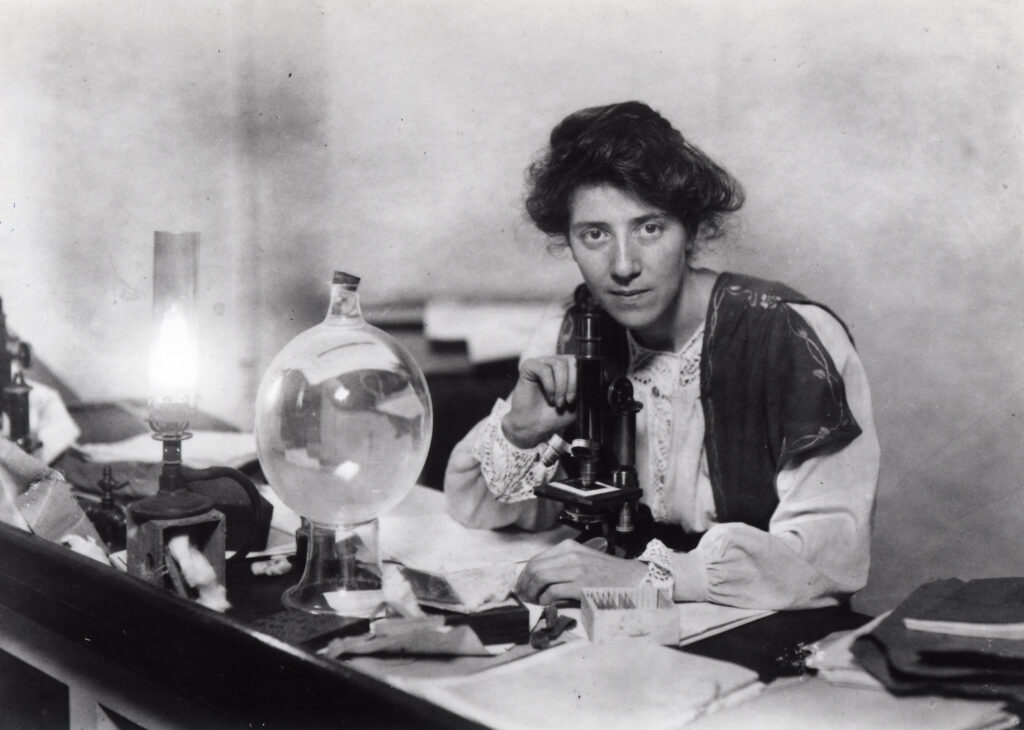 Claire Jones’s chapter considers the impact of gender on professional identities in science in the late 19th and early 20th centuries. Marie Stopes (1880-1958), shown here in her laboratory, benefitted from campaigns to open scientific institutions to women and was able to earn money from her work as a scientist, but earlier generations of women in science had enjoyed more flexibility to define their roles in the profession. Image source: Wikimedia Commons.

In publishing this edited collection we wanted to showcase cutting-edge new work by scholars which historicised the structural inequalities based on gender, as well as intersectional categories including class, race, and age, faced by different ‘precarious professionals’. The book brings together new research into lives on the margins of a wider range of careers than hitherto considered – considering ballet dancers, art critics, and art workers as well as scientists, lawyers, politicians, secretaries, writers, teachers, historians, humanitarian relief workers, social researchers, and Cold War diplomats, amongst others – from the 1840s to the 1960s, the era which classic social histories call ‘the rise of professional society’.

Ultimately, it expands our conceptions of professional identity for different women and men in the past and show how working lives might be more equitably reimagined in the future.

Our book excavates the messy, complicated working lives of more unconventional professionals, alongside considering those active in traditional fields such as law in a new light. Furthermore, several chapters analyse how men utilised, benefited from, and rejected different masculine ideals of professionalism. In so doing, it reveals that precarity was a thread woven throughout the fabric of modern professional life from its inception, although the forms in which this played out was markedly shaped by individual circumstances and historical contexts. Ultimately, it expands our conceptions of professional identity for different women and men in the past and show how working lives might be more equitably reimagined in the future.

We tackled these questions during a period in which gender, precarity, and professional identity came to the forefront of debates not only in women’s history, but in cultural heritage, social research, and popular culture. As we prepared the manuscript for submission in the autumn of 2020, the UK Government was forced, following widespread condemnation, to scrap an advert for its CyberFirst campaign featuring a young dancer tying up her ballet shoes with the caption ‘Fatima’s next job could be in cyber. (She just doesn’t know it yet.)’

As well as serving as a talking point for discussions on the challenges faced by young people, freelancers, and working women more widely during the pandemic, the outrage provoked by this particular image emphasises the ongoing importance of questioning and resisting the forces seeking to devalue different professional fields, and the ongoing centrality of gender and race to these debates. The point of contention here was not whether a dancer’s skillset prepares them for a job in coding (indeed it would, quite admirably, according to many dance commentators at the time), but why ‘Fatima’, a young, highly-skilled woman of colour, should be expected to give up her chosen profession to retrain in what is currently deemed a more marketable occupation.

We hope Precarious Professionals provides a timely contribution to these ongoing academic and public discussions about power, meritocracy, and expertise.

The advert and the furious debate it sparked help illuminate the complex emotions, ideals, and insecurities which swirl around the world of professional work and the perennially precarious place of certain people within it. Many of the institutions and associations of contemporary professional society experienced a reckoning with precarity during the period in which this book was compiled. Enlivened by global social movements exposing inequalities and hidden power hierarchies like #MeToo, the ongoing struggle for the rights of LGBTQ+ people, and Black Lives Matter, a variety of work is currently taking place to address discrimination in education, training, and advancement in the professions – led in our own field by the Royal Historical Society.  We hope Precarious Professionals provides a timely contribution to these ongoing academic and public discussions about power, meritocracy, and expertise. 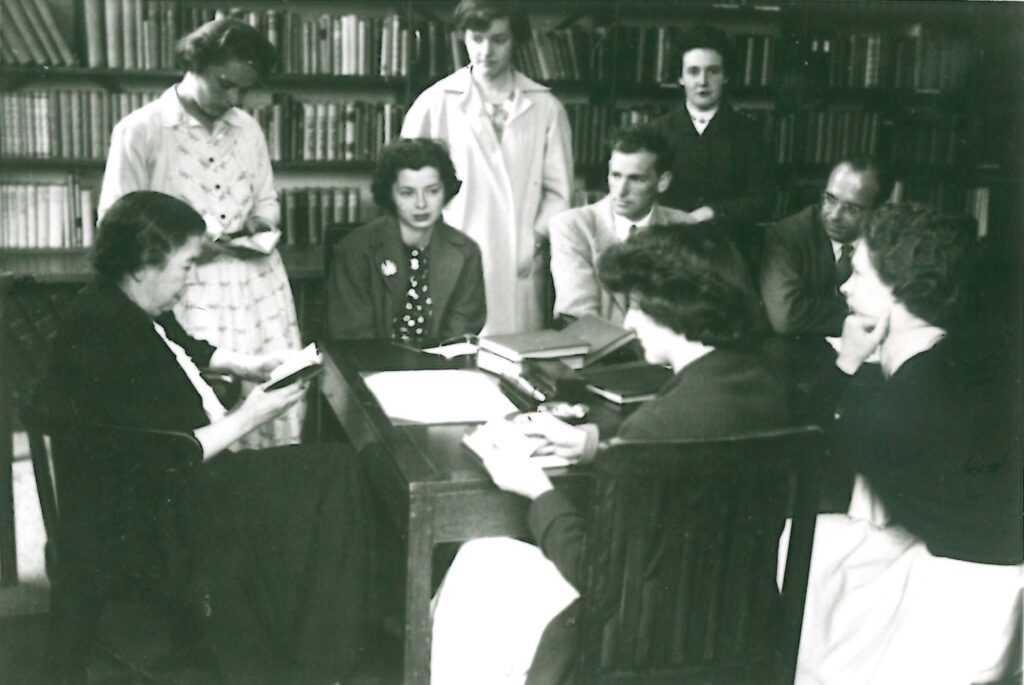 The scale and nature of the contributions to historical scholarship of Lillian Penson (1896-1963) – pictured here running her seminar at the IHR in June 1957 – have only recently been acknowledged. Laura Carter’s chapter surveys the lives and work of over 200 women ‘history-makers’ who often worked outside of traditional academic institutions in the 20th century. Image reproduced by permission of the Institute of Historical Research and Walter L. Arnstein.

Publishing an edited collection about professional identity in the ‘New Historical Perspectives’ series was the perfect project to accompany our own progression from doctoral researchers to work as historians in the different fields of archives and academia, and we would highly recommend the series to other early career researchers.

We would like to acknowledge the encouragement and support of everyone who worked on the manuscript with such commitment and patience at the Institute of Historical Research; Leslie Howsam, Peter Mandler, Penny Summerfield, and the anonymous peer reviewers at the Royal Historical Society, whose insight helped us shape the project in its early stages; and all the inspiring historians who contributed chapters to the book. We hope you enjoy reading it as much as we enjoyed collaborating on it. 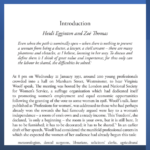 Heidi and Zoë’s Introduction to Precarious Professionals, along with each of twelve essays in the collection, are available as free chapter downloads via JSTOR OA Books.

Dr Heidi Egginton is Curator of Political Collections at the National Library of Scotland, with responsibility for the archives of Scottish politicians and campaign groups, political parties and the labour movement, as well as artists’ manuscripts. She has published articles on women bibliophiles and interwar antiques collecting in the Journal of Victorian Culture and Twentieth Century British History.

Dr Zoë Thomas is Associate Professor in Modern History at the University of Birmingham. Her first monograph, Women Art Workers and the Arts and Crafts Movement, was published in 2020 by Manchester University Press.

Discount offers for hard and paperback editions of the collection 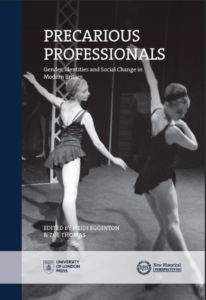 Accessible as a free Open Access text. Precarious Professionals is also available in hard and paperback print and Kindle from University of London Press. Print edition discounts (of 30%) are available for all: in the UK, EU & ROW using the code BALLET30 from here; and in North America via University of Chicago Press using code RHSNHP30 from here.

The complete collection is also available as a free pdf download or chapter-by-chapter via JSTOR Open Access Books.