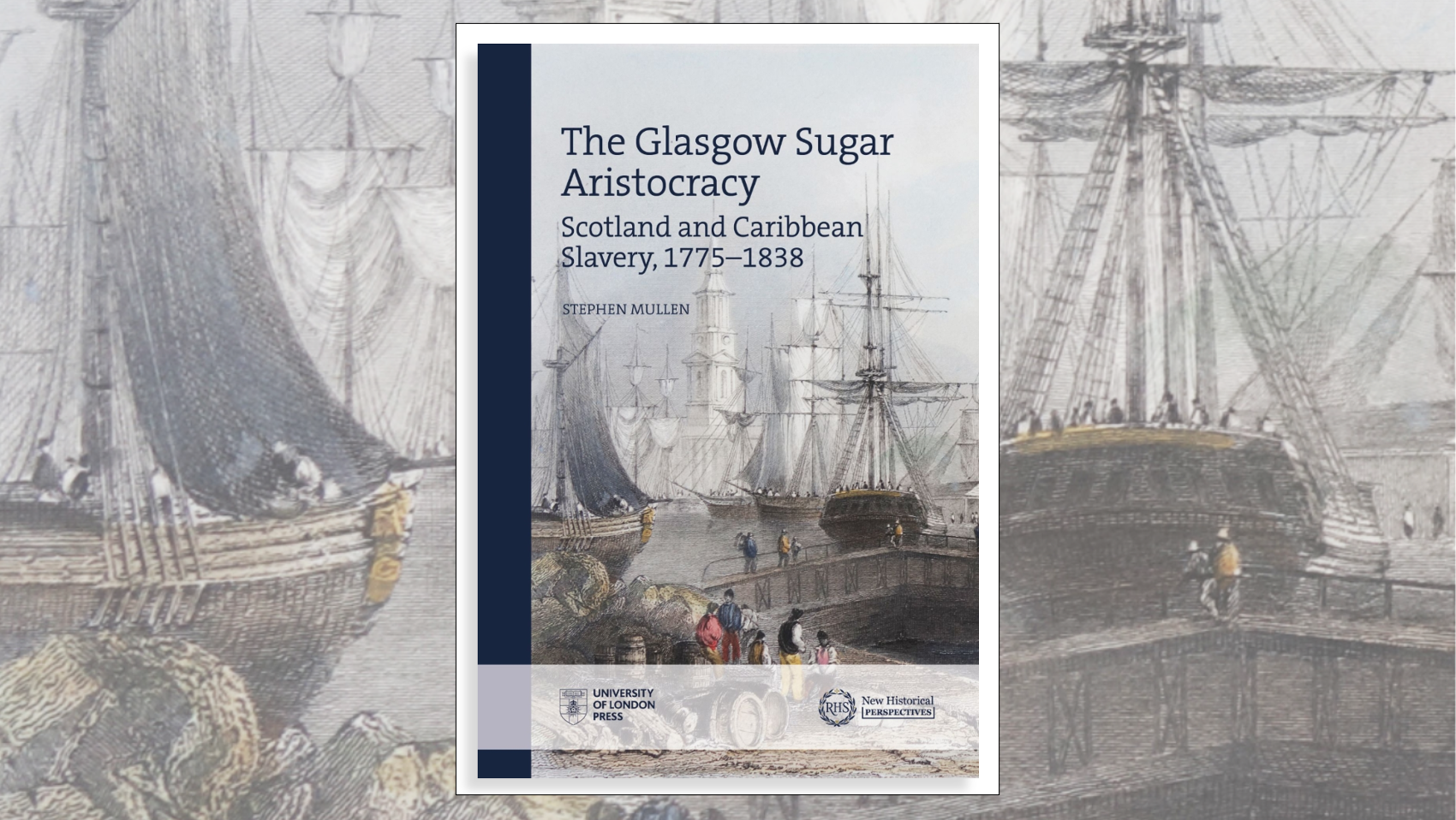 In this post Stephen introduces his monograph—the first large-scale survey of repatriated slavery fortunes using case studies of Scots in Jamaica, Grenada and Trinidad before emancipation in 1834. A study of individuals who acquired West India fortunes, The Glasgow Sugar Aristocracy explores the interconnections between colonies and metropole in the late eighteenth and early nineteenth centuries.

Stephen’s monograph, published on 10 November 2022, is the latest title in the Society’s ‘New Historical Perspectives’ book series for early career historians, in partnership with the Institute of Historical Research and University of London Press. As with all books in the series, The Glasgow Sugar Aristocracy is available in paperback print and as a free Open Access download.

In 1834, the year after plantation slavery was abolished in the British West Indies, Sir Archibald Alison, the Sheriff of Lanarkshire, commented upon the composition of the city’s elite ranks:

The West India merchants then took the lead and considered themselves as the best society in the city: five or six families of that class lived almost exclusively with each other, and rigidly confined themselves to visiting within their own circle. They had in consequence acquired the sobriquet of the “Sugar Aristocracy”.

Despite this high status afforded to them by contemporaries, as well their centrality to Scottish economic change from the American Revolution to the end of Caribbean slavery, Glasgow’s ‘Sugar Aristocracy’ remain relatively understudied. My new monograph—The Glasgow Sugar Aristocracy. Scotland and Caribbean Slavery, 1775-1838—corrects that with the first book-length study focusing on their activities. In the process, I adopt a new approach by taking metropole and colony in a single analytical frame, assessing how each influenced the other. 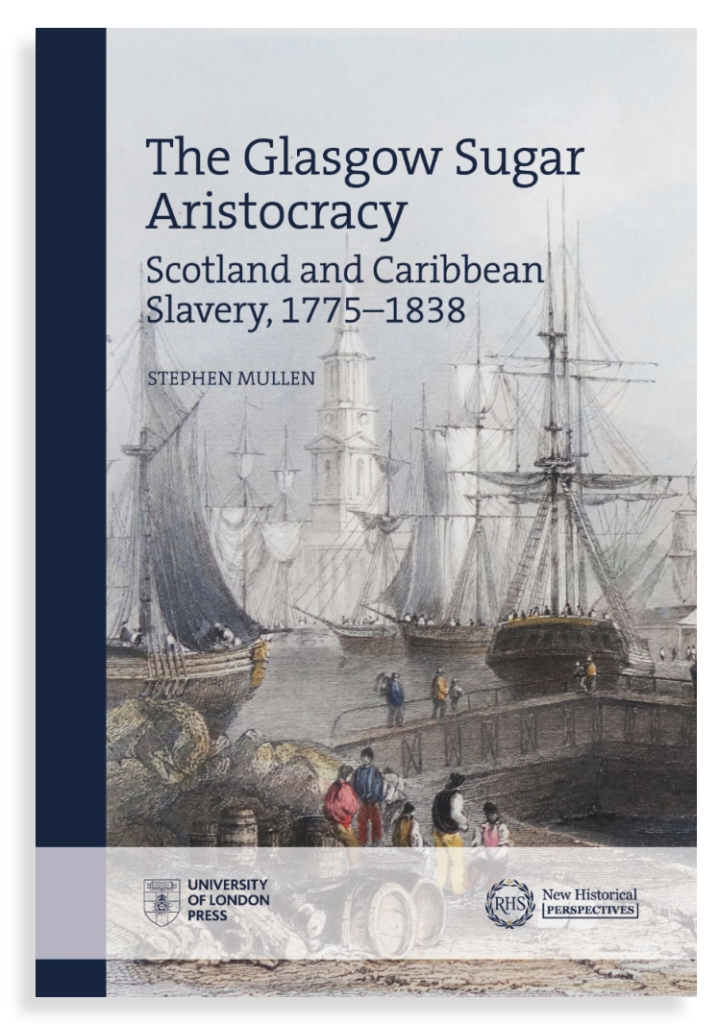 This monograph is not a vicarious replication of Scottish history through a study of imperially orientated Scots in metropolitan and colonial contexts. Instead, it poses new questions about the scale and significance of Atlantic commerce, and the importance of slavery-derived merchant and sojourning capital, to Scottish economic change after 1775. A broad range of qualitative and quantitative evidence, culled from records in American, English, Caribbean and Scottish archives, provides the empirical foundation for such an approach. For the book I sampled a broad diversity of sources; custom records, plantation deeds, mercantile ledgers, parliamentary and published works, planters account books, shipping advertisements, statistical accounts, correspondence between merchants and sojourners, legal records especially wills, testaments and inventories which record personal wealth on death. 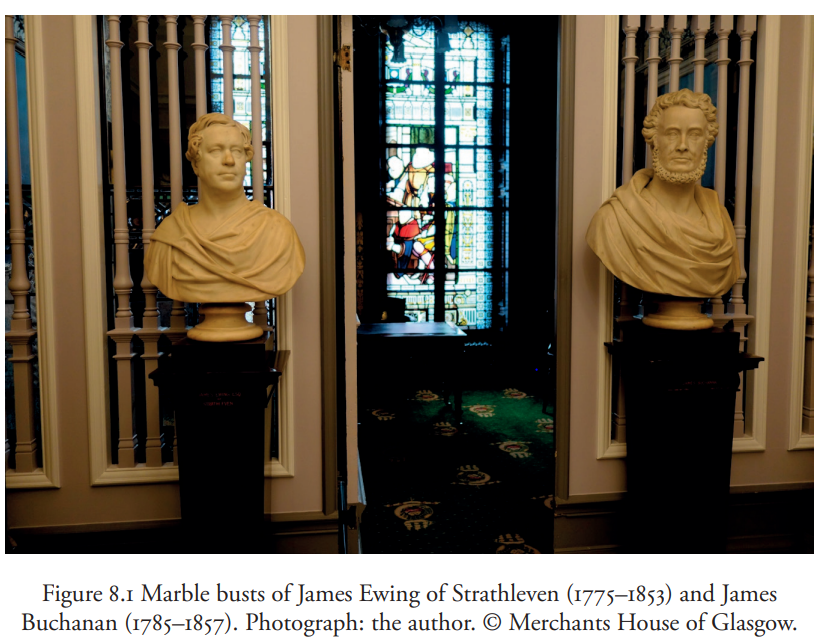 Firstly, my monograph illuminates the world of Glasgow West India merchants and planters in late-slavery era Great Britain, 1775-1838. This grouping was identified through the records of the Glasgow West India Association (established in 1807) and an earlier, less formal body, the West India Club. From existing records, it seems that around 150 West India merchants and planters operated out of Glasgow towards the end of Caribbean slavery. The wide dispersal of merchant capital in life promoted major multiplier effects via Scottish commerce, agriculture and industry: over 100 left personal wealth on death, and some were amongst the richest men in Great Britain. Their inventoried estates provide a snapshot of investments across multiple spheres. I offer new perspectives on the origins of this group, as well as the business practices and financial dealings, including sources of capital and importance of credit strategies. West India merchant houses were the legal mechanism that facilitated Atlantic commerce; their operations are traced in detail via surveys of partnership structures in Glasgow and case studies of colonial operations.

Secondly, the monograph assesses, in a comparative frame, Scots present across the British West Indies between 1775 and 1838. Although official emigration records are lacking before 1840, it seems very likely that many tens of thousands of Scots crossed the Atlantic to the West Indies before then. Chapters focus on the business of migration, as well as the Scottish diaspora in three islands subsumed into the English/British Empire at different stages of colonisation: Jamaica (1655), Grenada (1763) and Trinidad (1797/1802). Scots in the West Indies have been described as sojourners in modern historiography: intent on quick wealth and a rapid return to live out high-consumption lifestyles in their homeland. However, very few returned and according to one seminal study, even fewer transferred slavery-derived wealth to Scotland. Allan Karras argued in Sojourners in the Sun (1992) that while Scots accumulated increasingly large sums of capital in Jamaica after 1750, they repatriate very little. This conclusion has become accepted orthodoxy and is often cited as a proxy for the entire Scottish experience across the British West Indies. 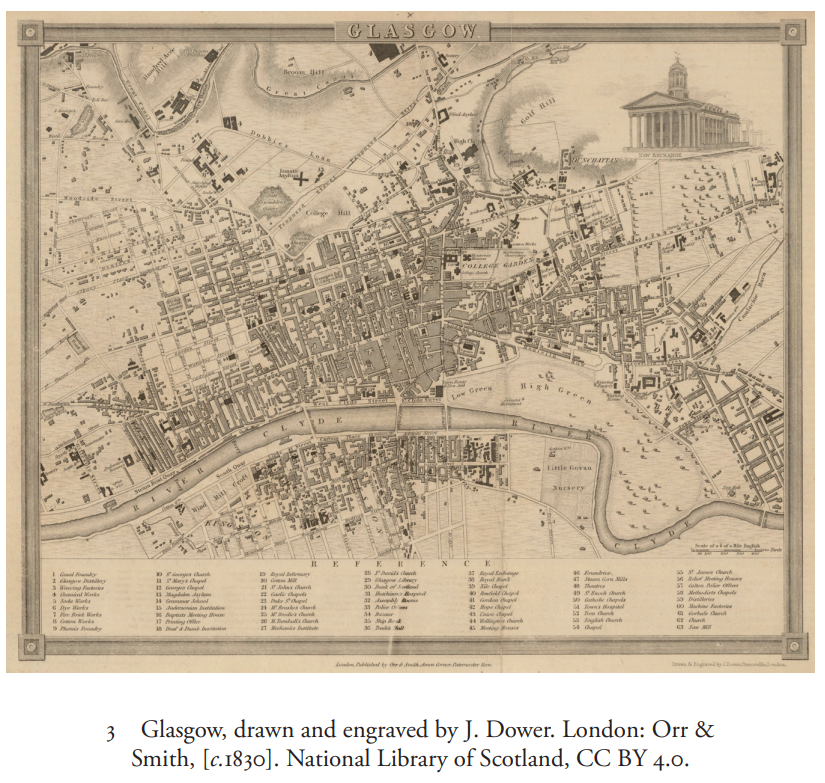 A new approach—examining legal records associated with Scots who died abroad—provides fresh insights. Scots were unusual British subjects in the West Indies: hailing from a society with its own established religion, as well as a distinctive educational and judicial systems. In the context of this monograph, the latter is important. Unlike England, Scottish legal sources were far more comprehensive with regards to probate processes. Contemporary Scottish legal recording inventoried personal wealth on death in some detail, as well as providing high numbers of associated wills and testaments which reveal dissemination strategies, allowing questions to be posed about the nature and extent of West India fortunes, and the process of repatriation and effects at home.

The monograph’s samples of Glasgow-West India merchant capital and sojourning fortunes are, in isolation, amongst the largest surveys of their type in British historiography.

My book provides details of over 100 Scottish-West India fortunes inventoried in Scottish courts (records now held in the National Records of Scotland). This facilitates a survey of the distribution of repatriated West India fortunes. Major fortunes (£100k-plus) were rare in the nineteenth-century West Indies: sojourns were generally high-risk with low-to-medium-returns. Nevertheless, the sheer numbers meant the overall flow of repatriated wealth was enormous. After 1800, Scots in the West Indies repatriated the equivalent of many hundreds of millions in modern monies to a rapidly industrialising Scotland. The monograph’s samples of Glasgow-West India merchant capital and sojourning fortunes are, in isolation, amongst the largest surveys of their type in British historiography. Taken together, they provide a comprehensive analysis which facilitates comparisons in a regional framework. 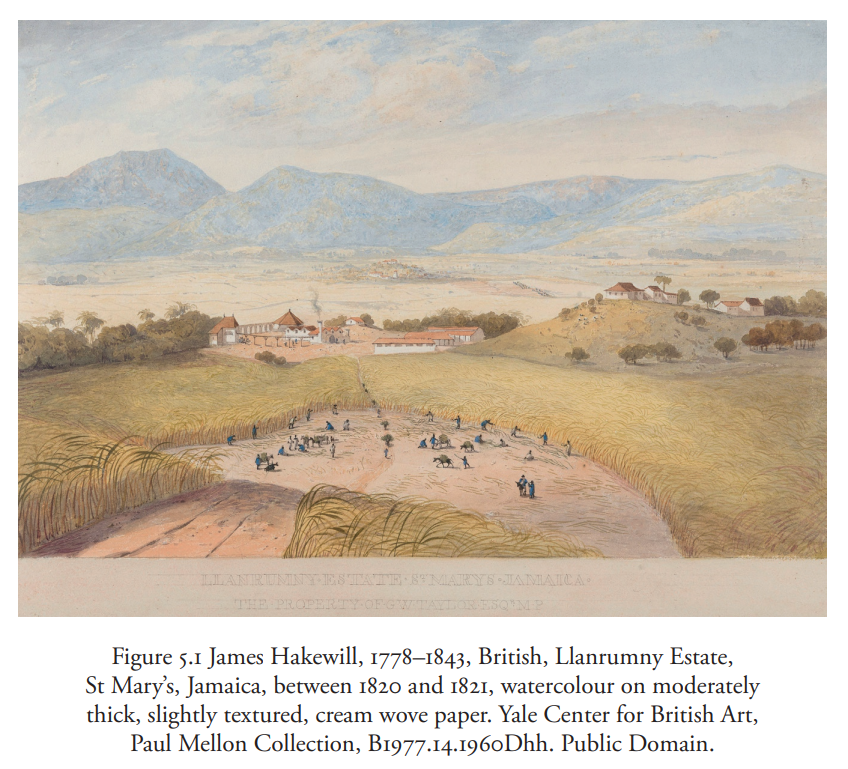 This monograph poses new questions about the effects of West India enterprise on the development, and under-development, of Scottish regions. Glasgow’s status as Scotland’s great Atlantic hub is well-known. The multiplier effects of West India commerce trickled down to hundreds of thousands of Scots employed in linen works, cotton mills and via philanthropic initiatives, raising questions about culpability and complicity. Atlantic commerce was inextricably connected to legal and financial institutions located in Edinburgh. While West India commerce, as well as merchant and sojourning capital, had a dramatic effect upon central-Scotland, this was not the case for all regions. These processes had a much less significant effect on the Scottish Highlands, for example, and it is likely the region shipped out large numbers of young men with relatively fewer West India fortunes returning.

Chattel slavery was a significant feature of Scottish economic development, and enslaved people are central to this monograph’s approach. This was a conscious decision, serving as a corrective to absences in earlier works of Scottish historiography that ignored the profound role in Atlantic slavery. Centering such voices is made more difficult due to the lack of testimonial accounts, although the views of enslaved people appear occasionally in the sources discussed above. Maria Jones, for example, was resident on an estate in nineteenth-century Trinidad overseen by the especially brutal John Lamont of Argyll, whom she described as a ‘blind buckra sinner’ who would face a reckoning in the afterlife.

My monograph considerably expands upon, in a Scottish context, the seminal arguments made by Trinidadian scholar Eric Williams in Capitalism and Slavery (1944).

While chattel slavery has recently been located in overviews of the Scottish Industrial Revolution, this monograph substantiates and evidences in a systematic, comparative manner. My monograph considerably expands upon, in a Scottish context, the seminal arguments made by Trinidadian scholar Eric Williams in Capitalism and Slavery (1944). It assesses the significance of Atlantic commerce, West India merchant and sojourning capital, to the development of one of the great British outports, in the process providing a holistic model to assess the effects of these processes. If Williams’ arguments about the importance of Caribbean slavery remain controversial in an English context, this monograph confirms there is no longer any debate about the significance to Scottish economic development—especially Glasgow and its hinterlands—and some of its institutions. As a result of these historic processes, Caribbean slavery remains a quotidian feature of life in modern Scotland and West India merchant capital continues to shape lives today.

Dr Stephen Mullen teaches History at the University of Glasgow. He is the author of numerous studies on the extent and legacy of Caribbean slavery upon eighteenth-century Scotland. His publications include Glasgow, Slavery and Atlantic Commerce: an Audit of Historic Connections and Modern Legacies (2022) and recent articles for History Workshop Journal, History Compass and Scottish Historical Review. 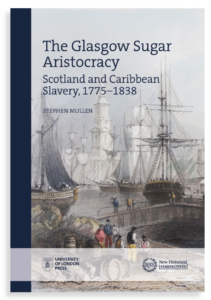 The Glasgow Sugar Aristocracy is now available in paperback print and as a free Open Access download from University of London Press (UK and RoW) and University of Chicago Press (North America). The book, with chapter-by-chapter downloads is also available from JSTOR Open Access Books.

About the New Historical Perspectives series

Books in the series are published in print and free Open Access with all costs covered by the NHP partners, the Royal Historical Society, Institute of Historical Research and the University of London Press. Authors also receive mentoring and a workshop to develop their book manuscript prior to submission. For more details of the Series and how to submit a proposal, please see here.

New Historical Perspectives titles include monographs and edited collections. The full list of titles in the series is available here.