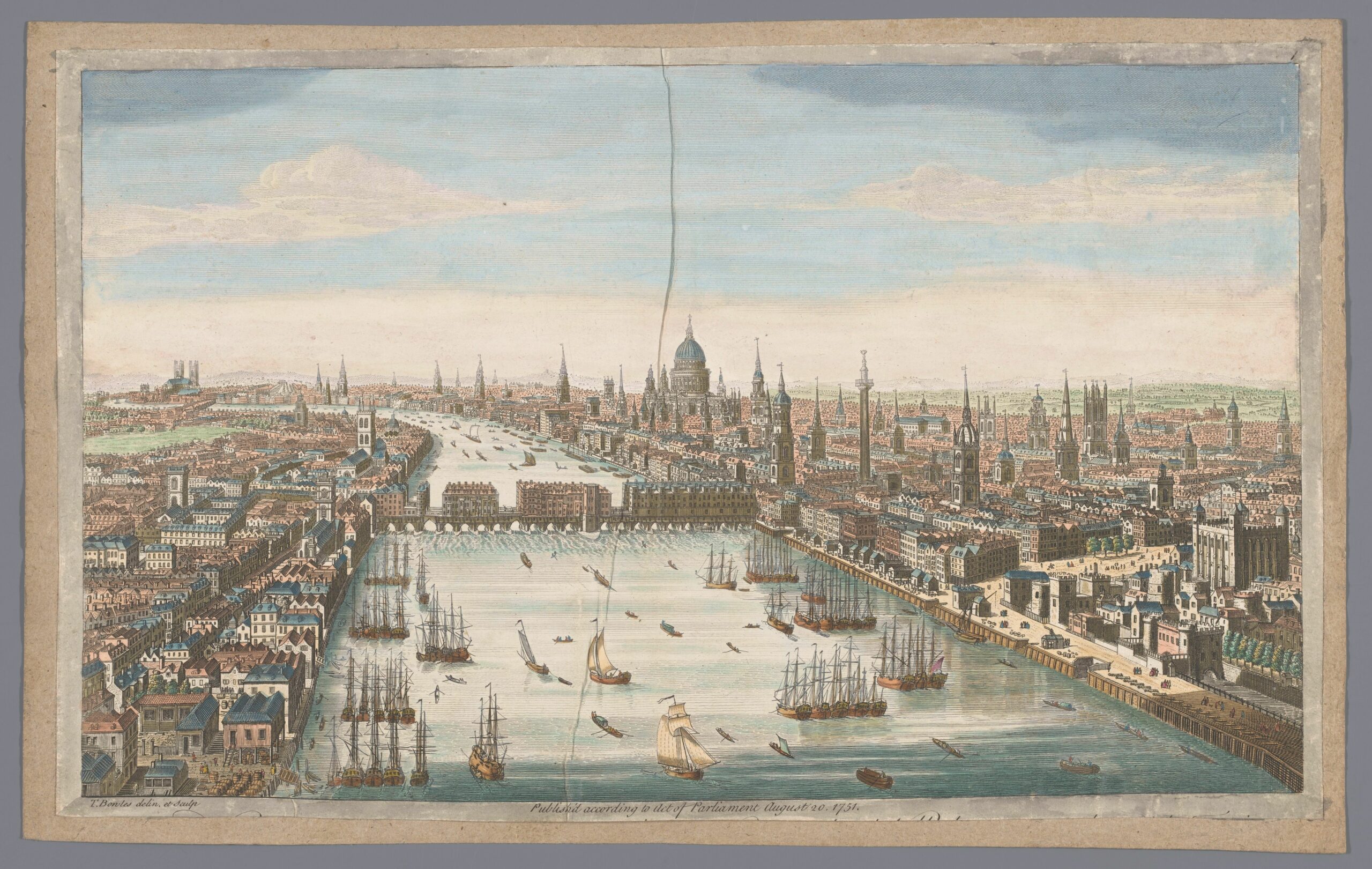 The historical demographer, Dr John Landers, was a doctoral student of Sir Tony Wrigley FBA, whose death in February 2022 has prompted many tributes.

Here John describes his experience of studying with Tony Wrigley as a postgraduate member of the Cambridge Group for the History of Population and Social Structure, and the distinctive ‘Campop’ culture created by Tony and fellow founders, Roger Schofield and Peter Laslett.

John Landers’ reflections of studying with Tony Wrigley sits alongside Simon Szreter’s recent RHS blog post as one of two commentaries from Society Fellows on the life, career and legacy of one of Britain’s leading social and economic historians from the past half century.

Tony Wrigley’s passing in February 2022 is a matter of great personal sadness – he was a part of my life, as doctoral supervisor, colleague, and general mentor for nearly half a century – and his work also had a great influence on my own thinking.

Our first meeting was in my second undergraduate year, though on that occasion I’m not sure that we exchanged more than a few words of greeting – and possibly a handshake. I was at Oxford, enrolled on the – then newly established – Human Sciences Honour School. Human Sciences had, as it does still, a core paper in Demography, and I had become fascinated by the discipline’s combination of formal analytic rigour and wide interdisciplinary scope.

I had decided against History as an undergraduate degree but retained a love for the discipline and had been inspired by Michael Flinn’s Economic History Society (1970) pamphlet British Population Growth 1700-1850 (I still have my copy fifty years later). What particularly excited me was the prospect of a field where key empirical questions remained unanswered and factual discoveries were still to be made; unlike, as I then thought, so much of what I had been studying, which seemed to consist of chewing over competing explanations for well-established facts.

By then the Cambridge Group for the History of Population and Social Structure (aka Campop} had stablished its reputation, and I had been given Tony’s (1969) Population and History as undergraduate reading. And so it was that, that morning in the early Spring of 1974, I took the cross-country route from Oxford through Bicester, Buckingham, Bedford – and the nascent Milton Keynes – to Cambridge and the Group’s upstairs rooms in Silver Street. My scheduled meeting was with Roger Schofield, then the Group’s administrator, and at a certain point Tony came into the room, and we were introduced. Roger was both helpful and encouraging, and in due course I was nominated for a Social Science Research Council [SSRC] research studentship in Sociology.

I had regular meetings with Tony in his office – I forget at what intervals – but, thinking back to those days, it’s in the library, surrounded by the Campop personnel, that I always picture him.

The autumn of the following year thus found me back in Cambridge, in the Trumpington Street offices to which the Group (now an SSRC Research Unit) had recently moved. At that time, graduate students could go straight into doctoral research – though it was necessary to submit an upgrading proposal after an initial probationary year – and I was assigned to Tony as my supervisor. Since my studentship was in Sociology, I had a desk in the Social Sciences’ (very) Old Cavendish building but spent most of my working days in the Trumpington Street library. I had regular meetings with Tony in his office – I forget at what intervals – but, thinking back to those days, it’s in the library, surrounded by the Campop personnel, that I always picture him.

The library was the venue for the weekly, term-time, seminar as well as the morning and afternoon tea/coffee sessions to which all-comers were welcome. Important as the seminar – with its succession of distinguished speakers (and auditors) from Cambridge and the wider world – was, to me it was the coffee/tea sessions that really gave the Group its distinctive character. I don’t think the concept of ‘team-building’ had been invented then (and there was not a paintball in sight), but that was really what it was all about. These sessions were not just an occasion for professional and social interchange but exemplified the Group’s egalitarianism – everyone took their turn at preparing the refreshments and washing-up afterwards (everyone, that is, except Peter Laslett – a tribute more to his spectacular failures of hand-eye co-ordination than any hierarchical status).

In terms of personality, the Group’s three principal characters – Tony, Roger Schofield, and Peter Laslett – were about as different as could be imagined. That such differences became complementary strengths was, I believe, down to Tony. His quiet, unassuming, presence was, to me, the still centre around which everything revolved.

Following an initial attempt to steer me in one particular direction, I think he decided early on that I should be allowed to work out my ideas in my own way, and that a ‘light-touch’ mode of supervision would be the most appropriate.

The Group provided an ideal milieu for a doctoral student, combining the advantages of the team-based ‘science model’ – providing computing, library, and administrative resources along with the general support of a collegial environment – with the comparative autonomy and freedom of the ‘lone scholar’ humanities model.  Tony, as supervisor, listened patiently to my ideas. Following an initial attempt to steer me in one particular direction, I think he decided early on that I should be allowed to work out my ideas in my own way, and that a ‘light-touch’ mode of supervision would be the most appropriate. But, once I had decided I would undertake a family reconstitution study, he very helpfully steered me in the direction of the London Quakers and their excellent vital registers.

My particular focus, at that time, sprang from my interest in population genetics, and I aimed to construct a total population genealogy of the study community. With Tony’s help I worked out an appropriate methodology, using material from an earlier reconstitution held in the Group’s archive. By the end of the first year, however, my ambitions had expanded to encompass a species of community-based histoire totale, and I submitted my upgrading document as a project in ‘anthropological demography’. I still recall Tony returning the document to me with a slightly raised eyebrow and the simple comment ‘I think this is more like a proposal for a French Thèse’ – as nice a way as I can imagine of implying that the project was totally impractical without actually being discouraging. But he supported my upgrading, nonetheless.

Family reconstitution is a form record-linkage first developed in France by the demographer Louis Henry. It was introduced to the anglosphere by Tony, with the study of Colyton that first made his name known to historians. It’s analytically robust, but labour intensive – I once calculated that I had filled in some twenty thousand pieces of paper. So I spent much of the next eighteen months working in London, and meetings with Tony were fairly few and far between until the stages of data entry and computer analysis, undertaken by the Group’s support team.

Then came the process of writing-up, and it became all too apparent that Tony’s initial reservations were entirely justified. The early drafts sprawled and lacked focus. At our meetings he responded with his characteristic blend of encouragement and incisive critique. Rather than telling me that the text wouldn’t do (which was the case) – he pointed to the one chapter that did work and remarked how good it would be if the rest were brought up to that standard. And eventually it was – or so I believe – and Tony’s light touch approach was validated as I developed a mortality-focussed analysis based on the epidemiological relationship between metropolitan centres and their hinterland.

Tony’s encouragement in this respect was the more noteworthy because his own thinking was developing in such a different direction. The publication of the Group’s first ‘big book’ (Wrigley and Schofield’s Population History of England) in 1981 marked a paradigm shift in the discipline, founded on the substantive primacy of the marriage/fertility nexus and the primacy of economics in matters of explanation. In contrast to the older “mortality-driven” perspective, mortality fluctuations now featured as random, unprogrammed, disturbances to the functioning of the demographic system – powerful perhaps but lacking in intellectual interest.

In fact, in that age of epidemiological innocence, mortality from infectious disease was widely seen as being – or shortly to be – of ‘merely historical’ interest, bound, as it was, to yield to a medical armamentarium laden with vaccines and bactericidal drugs. (Around that time a contemporary of mine enrolled in an epidemiology Masters was advised not to take the infectious disease options because there would soon be none left to study!)

He continued to give me much support and encouragement, without which I would not have obtained the Wellcome Trust grant allowing me to expand my work on London’s demographic history and to publish Death and the Metropolis in 1993.

Such beliefs, of course, were soon to collapse with the onset of HIV/AIDS, and historical demography itself developed an ‘epidemiological turn’ which moved it away from the ambit of economic history, just as Tony’s own interests were moving further in that direction. He continued, nonetheless, to give me much support and encouragement, without which I would not have obtained the Wellcome Trust grant allowing me to expand my work on London’s demographic history and to publish Death and the Metropolis in 1993.

By then we were colleagues at All Souls College in Oxford, so I saw much more of him, although – on the face of it – our fields of interest were diverging still further. I focused increasingly on the demographic consequences of war and state formation – a topic in which, to the best of my knowledge, Tony had little interest. He was working on the Group’s second ‘big book’ – the reconstitution-based English Population History (1997) – but was clearly moving on from demographic to economic history, and in 1994 he was appointed to the Cambridge Professorship of Economic History. Nonetheless, as I began work on my synthetic monograph, The Field and the Forge – struggling to bring order to a large and diffuse mass of material to order – it was in his account of the ‘organic economy’ and its implications, that I found the basic organising concept around which everything cohered. I owe as much to Tony in that regard as I do in all else in my career. 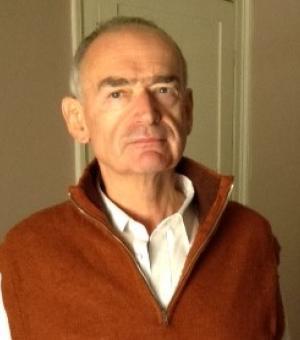 Dr John Landers is Senior Research Fellow at Hertford College, Oxford where he was previously the college’s Principal, 2005-2011. As a Cambridge postgraduate, John studied with members of the Cambridge Group for the History of Population and Social Structure, including Tony Wrigley who supervised his PhD thesis, ‘Some problems in the historical demography of London, 1675-1825’, completed in 1984.

John’s later publications include Death and the Metropolis: Studies in the Demographic History of London, 1670–1830 (1993) and The Field And The Forge: Population, Production, and Power in the Pre-industrial West (2003) 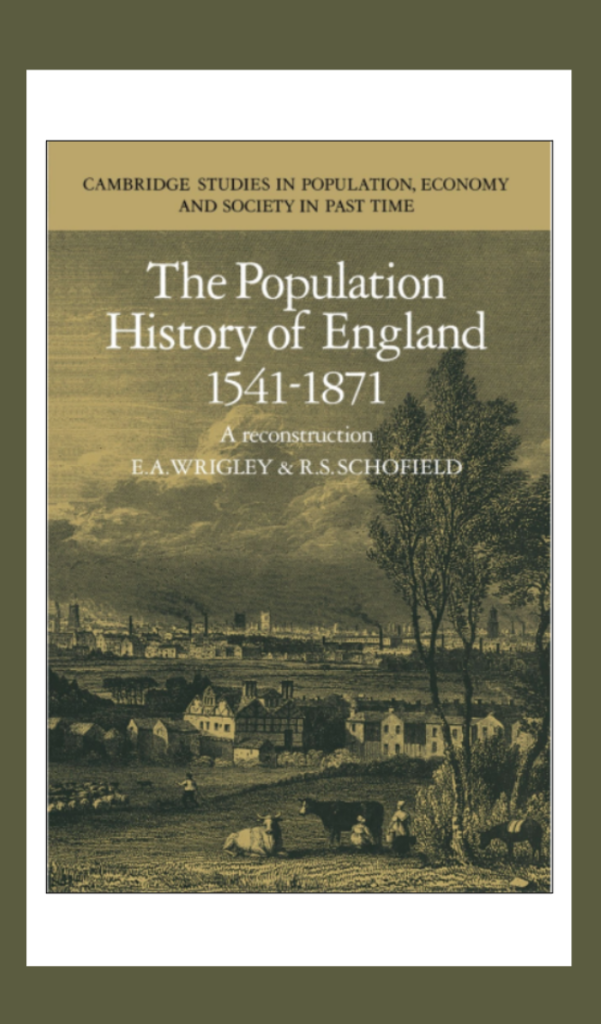 The Royal Historical Society blog recently published another reflection of the life and work of Sir Tony Wrigley (1931-2022) by a fellow Campop member, Professor Simon Szreter.