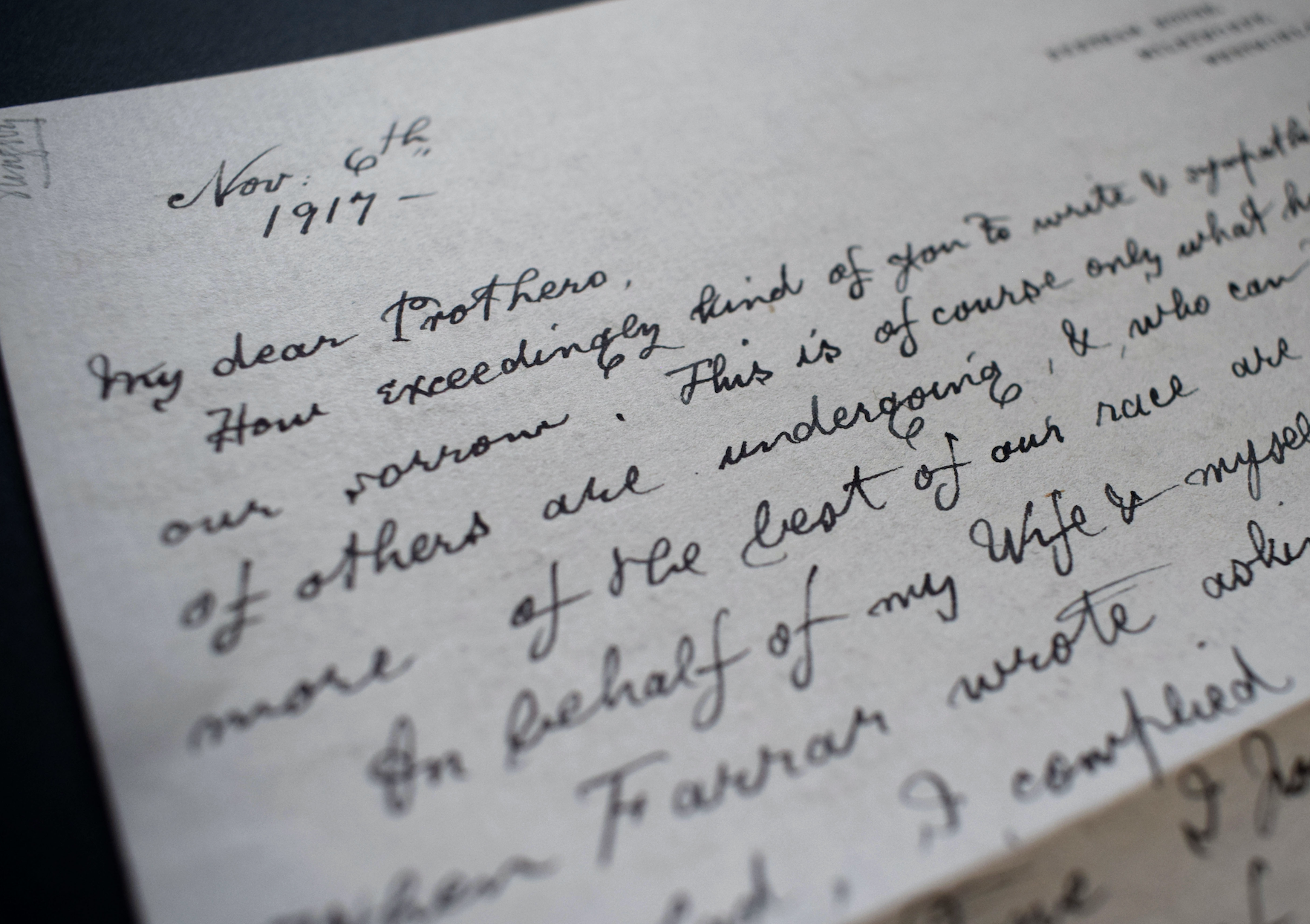 Cataloguing the Papers of George W. Prothero – A Personal Reflection

In January 2022 the Society published its new catalogue of the papers of George W. Prothero (1848-1922), historian, editor and President of the RHS between 1901 and 1905. The collection, the largest in the Society’s archive, runs to more than 1000 items.

The papers chart the life of a leading campaigner for ‘professional history’ and the rise of History as a discipline. Prothero’s passion for understanding the past ranged from his academic career (as the first Professor of History at Edinburgh University) to government work for the Versailles Peace Conference and his support of historical plays and pageants in schools.

Work to catalogue Prothero’s Papers began in 2019 but was often postponed due to Covid restrictions. In this post, Dr Eilish Gregory — lead researcher on the project (2019-20) — reflects on her encounters with Prothero in the archive. The Society is very grateful to Eilish and her fellow cataloguer Imogen Evans for their work, as well as Zoë Karens for continuing and completing the work in 2021-22, and to the March Fitch Fitch for its generous co-funding of the project.

Almost three years ago, I was asked, alongside with Imogen Evans, to help sort through and revise a catalogue of the Prothero Papers archive, as part of the ‘Recovering History: the Royal Historical Society at 150 Years’ project, generously supported by the Marc Fitch Fund.

The papers were originally catalogued in the 1960s, and our task was twofold: first, to verify the pre-existing information in the original print catalogue; and, second, to update the Society’s cataloguing with information that would enable future researchers — especially those studying the emergence of the modern historical profession — to search the collection. This was also to be an exercise in archive conservation (when we began the papers were stored haphazard in a set of tin trunks) as well as promotion with the scanning of selected images, which are now available to view on the RHS website.

We began the project in pre-Covid times, and the pandemic of course led to extended periods of absence from the RHS office and the Prothero papers. These enforced delays therefore make the recent completion and launch of the full catalogue all the more satisfying. 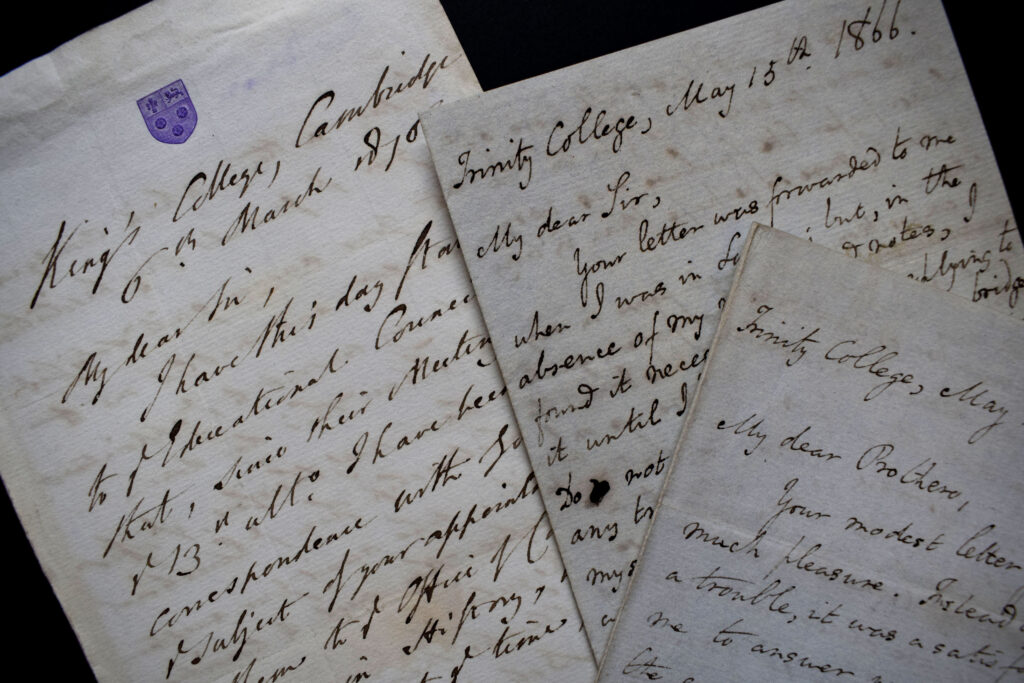 I had known the name of George. W. Prothero through association with the Royal Historical Society’s annual ‘Prothero Lecture’, held each July. As a historian of early modern Britain, I also knew Prothero’s work on Elizabethan and Jacobean statutes that played an integral role in the early stages of my research career. What I did not anticipate while undertaking my work with Imogen, was how fond I would become of the former RHS President who served in this role in the first decade of the 20th century, and who died a century ago, in July 1922. 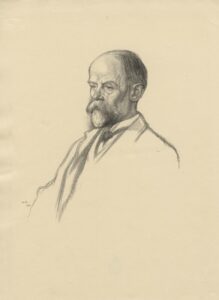 George Walter Prothero (1848-1922), was an eminent historian whose work portfolio included lecturer at King’s College, Cambridge, editor of the Quarterly Review, Director of the Historical Section, Foreign Office, and a member of the British Peace Delegation at the end of the First World War. Prothero was President of the Royal Historical Society between 1901 and 1905, and the annual RHS summer lecture is named after him in honour of his contribution to historical scholarship.

Through his papers, we get a detailed glimpse into his academic career and personal life at the turn of the twentieth century when the world was changing at pace. Prothero’s correspondence reveals a richly varied life, from tutoring students at universities to advising the British government on social reform.

It also shows how heavily involved Prothero was — along with other past RHS councillors and presidents — in the design and setting up of pioneering academic institutions to promote the emerging discipline of historical research and provide dedicated teaching in history.

Prothero’s advocacy in this area included his support for the British School at Rome, and a ‘School of Advanced Historical Studies in London’, discussed in the early 1900s and which led to the creation of the Institute of Historical Research in 1921.

What for me stands stands out in the papers, is the extent to which — in addition to his academic work and campaigning — Prothero was deeply involved in discussions on matters of contemporary political and social reform.

The collection also shows Prothero at work as a historian and in regular discussion and debate with fellow researchers. The papers reveal the lengths he went to when trying to find surviving information regarding the 1583 High Commission under Elizabeth I, and the obstacles he encountered in the archives. His various letters to contemporary historians and other scholars also expose how they revised and critiqued one another’s work to attain high scholarly standards — something that will strike a chord with twenty-first century readers who’ve experienced vigorous peer-review of work in draft.

What for me stands stands out in the papers, is the extent to which — in addition to his academic work and campaigning — Prothero was deeply involved in discussions on matters of contemporary political and social reform. Prothero’s endorsements were widely sought by an array of societies and movements. These include letters from the anti-women’s suffragette movement, who wanted Prothero and his wife to oppose women from receiving the vote, and Prothero’s discussions on Home Rule in Ireland in the early 1900s. 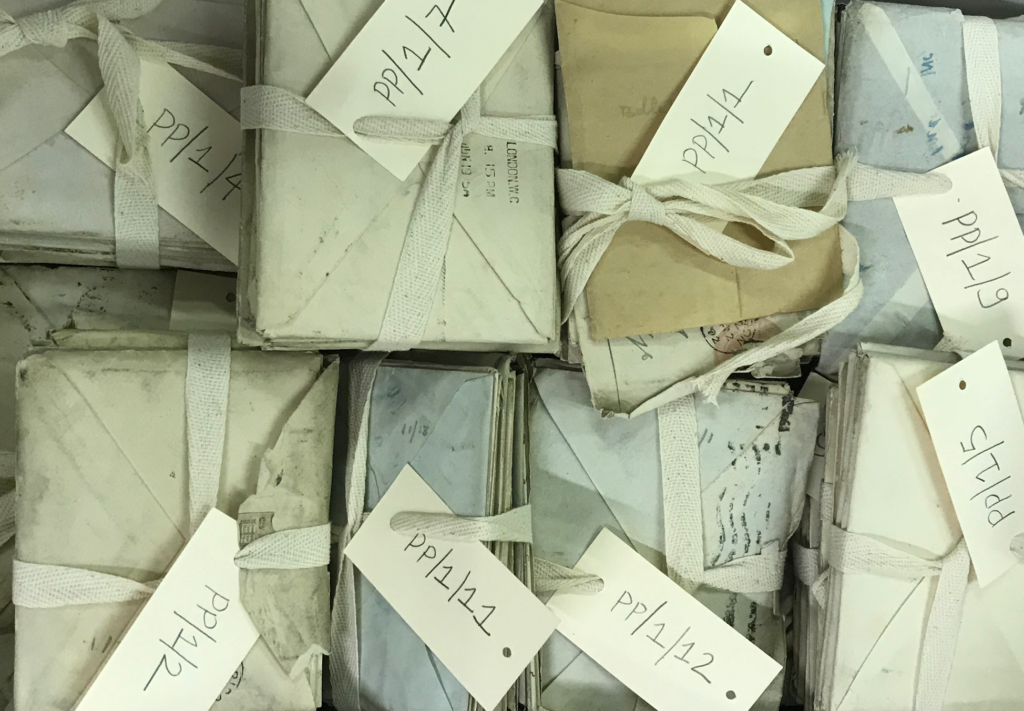 Prothero’s correspondence also reveals his commitment to stand up for injustice, with letters detailing his involvement in prison reform for conscientious objectors at the height of the First World War, and his battle to prevent a Royal Historical Society Fellow, Felix Lieberman, from being ejected from the fellowship due to his German nationality. Prothero was unsuccessful here, though Lieberman was reinstated as a Fellow in 1924. From reading widely across the correspondence and working papers, it’s evident Prothero genuinely sought to create a better society, and was keen to use and promote historical understanding well beyond academia. His will, along with letters written by friends after Prothero’s death, makes clear his generosity as a man and scholar, and also as an individual notable in his kindness to the domestic staff who maintained his house on Bedford Square, London.

Prothero was not just a figure of professional note … He also sought an appreciation and interest in history outside of the academic structures he did much to foster, be this his work for the British government ahead of the Versailles Conference or his membership of the Village Children’s Historical Play Society.

Being a part of RHS’s Prothero project gave me the opportunity to better understand this campaigner for history and former President of the Royal Historical Society. As the Society’s newly catalogued papers show, Prothero was not just a figure of professional note, as a tutor, lecturer, researcher, adviser and past president. He also sought an appreciation and interest in history outside of the academic structures he did much to foster, be this his work for the British government ahead of the Versailles Conference or his membership of the Village Children’s Historical Play Society.

Now, with the completion of this cataloguing project, overseen by the archivist Zoë Karens, more researchers will have chance to encounter Prothero and learn of his role in the development of modern historical practice. 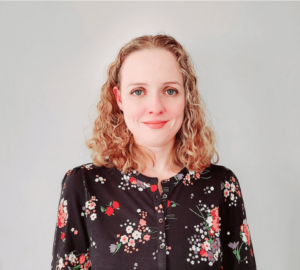 Dr Eilish Gregory is Assistant Professor at the New College of the Humanities and an Associate Lecturer at Anglia Ruskin University.

A former Postdoctoral Research Associate at the RHS, Eilish’s new book, Catholics during the English Revolution, 1642-1660: Politics, Sequestration and Loyalty, is available from Boydell and Brewer.

About the Prothero Papers at the Royal Historical Society 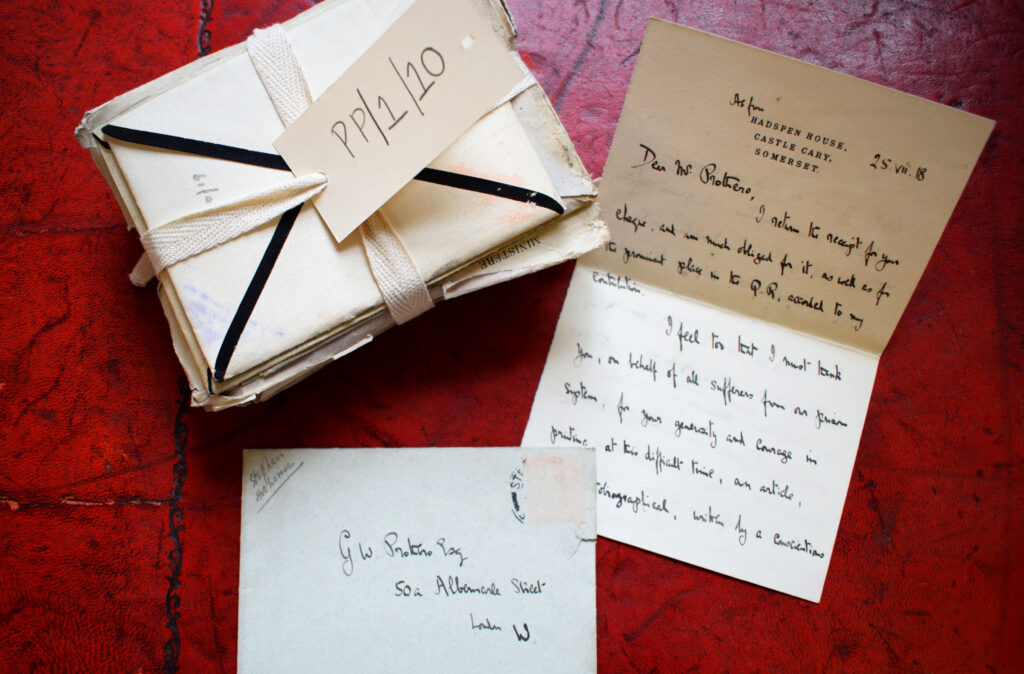 The new catalogue of Prothero’s papers at the RHS is now available online. The Prothero collection runs to more than 1000 items and is the largest named set of papers in the Society’s Archive, held at University College London. The catalogue provides item-level listings of George Prothero’s correspondence, professional papers and manuscripts, dating from the late 1860s to the early 1920s.

In addition to the writing of a new catalogue, the recently completed project included a conservation review of the Prothero collection, new storage, and the rediscovery and incorporation of 10 bundles of letters previously thought lost.

Selected scans and highlights from the collection are available in this recent RHS blog post (January 2022). For more on the Society’s holdings of primary documents, please see the RHS Archive section of our website. Work is now underway to catalogue and publicise other notable areas of the RHS collection, including papers relating to the Society’s own history from the late 1860s, and to the Camden Society (1838-1897). 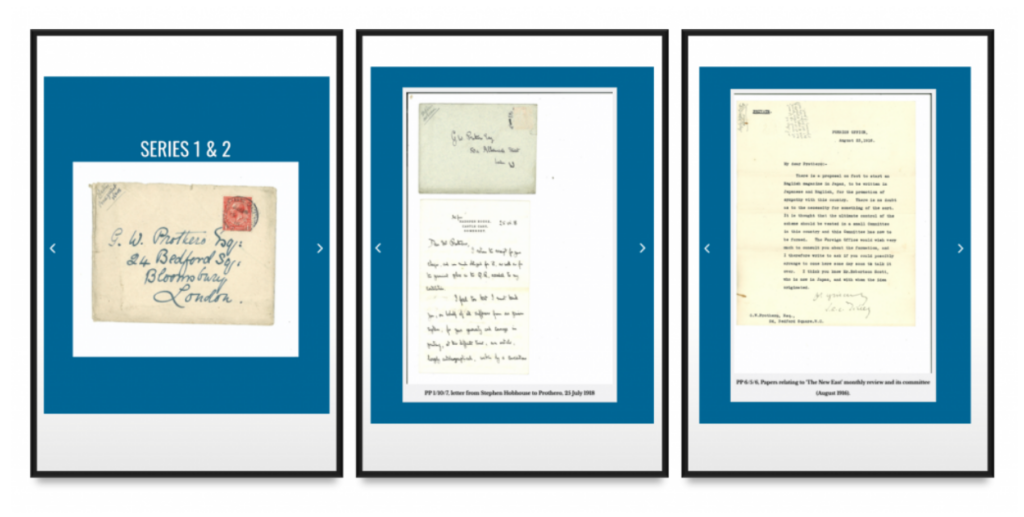 More broadly, we hope this availability — starting with new G.W. Prothero catalogue — will bring the RHS archive to wider public attention, as an important statement on the development and membership of the nineteenth- and twentieth-century historical profession in Britain and overseas.

Visits to the Archive are welcome, with priority given to the Society’s Fellows and Members. For more, please contact: administration@royalhistsoc.org.