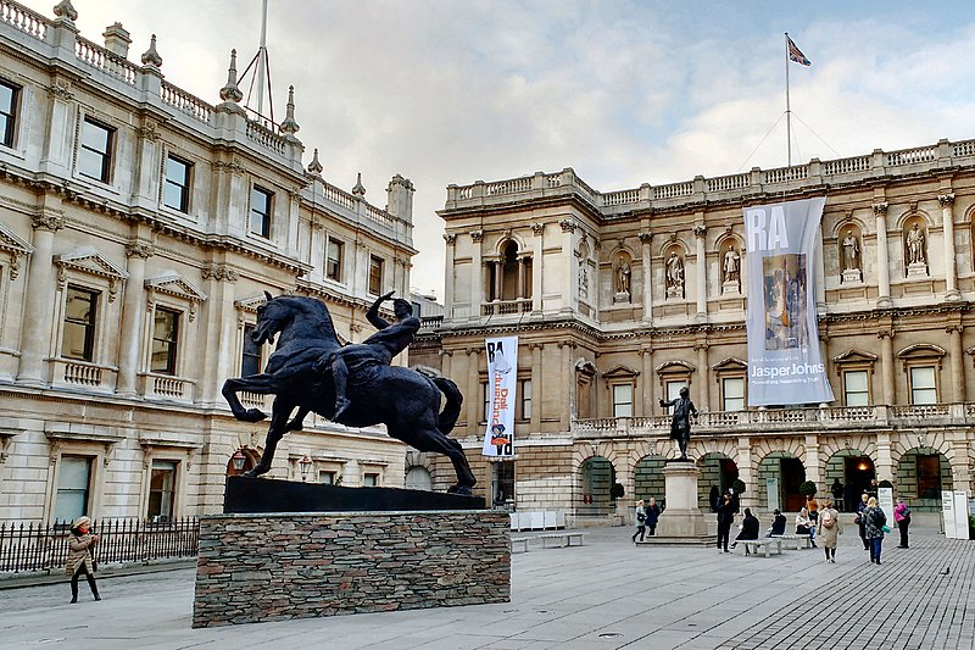 When Rhodes was not built

Statues and commemorations of Cecil Rhodes provoke strong reactions. Recent calls for removal have focused especially on statues at the universities of Oxford and Cape Town, prompting others to argue for their retention or contextualisation.

In this latest post for the ‘Writing Race’ blog series, Professor Durba Ghosh considers the longer history of Rhodes statuary. As she reveals, this is equally turbulent. The acceptability of commemorations to Rhodes has long been questioned, with the status and location of statues — in Britain and southern Africa — debated throughout the twentieth century.

Last year, in June 2020, the members of Oriel College voted to remove the statue of Cecil Rhodes that graces its entryway. In March 2021, a petition to defend Rhodes’s position was filed, with defenders arguing that to take down the statue was akin to ‘removing history’ and erasing his ‘contribution to education.’  In these debates, the Rhodes statue at Oriel College is treated as a historical document that attests to facts that are largely settled.

Yet, defenders of the statue ignore that Rhodes’s legacy was always problematic; most of the statues in his honour were controversial from their installation. The statue at the University of Cape Town that unleashed the Rhodes Must Fall campaign in South Africa was placed there in 1934, a generation after Rhodes died. That same year, the statue at Oriel College was unveiled overlooking the main thoroughfare in Oxford, England. As Richard Drayton, the Rhodes Professor of Imperial History at King’s College London, has noted, ‘The commemorations of Rhodes in Oxford were part of a long campaign to launder Rhodes’s reputation.’

We know that racism was acceptable in the 1930s; racism and white supremacy found its most extreme articulation in fascist movements of that decade. Given the prevalence of racism, it is striking that even in the 1930s, officials in London refused the installation of a statue to commemorate Rhodes in the heart of Britain’s empire. More striking still, there is no dedicated statue to Rhodes in London now, with one exception.

A Rhodes statue in the centre of London?

In the 1930s, leading business figures from South Africa wrote to officials in the Colonial Office. Sir Robert Williams — a Scottish-born businessman who worked as a mining associate of Cecil Rhodes South Africa — came to officials with an offer to underwrite the substantial cost of installing a statue to Rhodes in central London. Williams preferred a site that was well known and visible to the public; he suggested Trafalgar Square, Kingsway, Parliament Square, or opposite Marlborough Gate which leads to St. James’s Park. As the trail of correspondence wound its way through different government offices, a series of clerks, officers and middle managers expressed their reluctance to install a statue to commemorate Cecil Rhodes in London.

No one at the Department of Works directly refused the request; nor did anyone say why there was no room for a statue of Cecil Rhodes in London. Nonetheless in 1936 the Royal Fine Arts Commission rejected a proposal to install Rhodes in Trafalgar Square on the empty fourth plinth. Sir Williams withdrew the offer because he was unhappy with the choices of sites that had been presented to him, deeming them insufficiently central.

Several years later, in 1939, Stephen Cromer Leverton, the overseas secretary of the South Africa Commemorative Association, revived the possibility of a Rhodes statue in London. It was Leverton’s opinion that ‘A number of South Africans were most desirous of seeing a statue of Rhodes in the heart of the Empire.’ In this cycle of correspondence, officials in the Department of Works rejected the proposal ‘based on the paucity of important sites.’ They noted that traffic was an important consideration, particularly when placing statues in major thoroughfares.

Without addressing why a statue was not possible on public land in London, the Department of Works recommended Leverton approach institutions located on private or crown property which could accommodate a commemoration of Rhodes.

Today there are no statues dedicated to Rhodes in central London. This omission suggests that, even while statues were being installed in the 1930s (such as those at Oriel College and at the University of Cape Town), officials were fully aware Rhodes was an objectionable figure whose historical contributions did not merit commemoration in bronze, particularly on a public site.

‘Physical Energy’: the legacy of Rhodes in London

The legacy of Rhodes is not, however, entirely absent from London. In opening years of the twentieth century, the British sculptor George Frederic Watts was commissioned to design a commemorative sculpture to Rhodes for a monument by the architect Sir Herbert Baker in Cape Town, South Africa. The memorial begun shortly after Rhodes’s death in 1902 was completed in 1912. Watts’s sculpture depicts a figure on a moving horse, recalling equestrian statues of the past. The rider is presumed to represent Rhodes and his legacy of colonial exploration and occupation. In the artist’s rendering, the sculpture was ‘a symbol of that restless physical impulse to seek the still unachieved in the domain of material things.’ 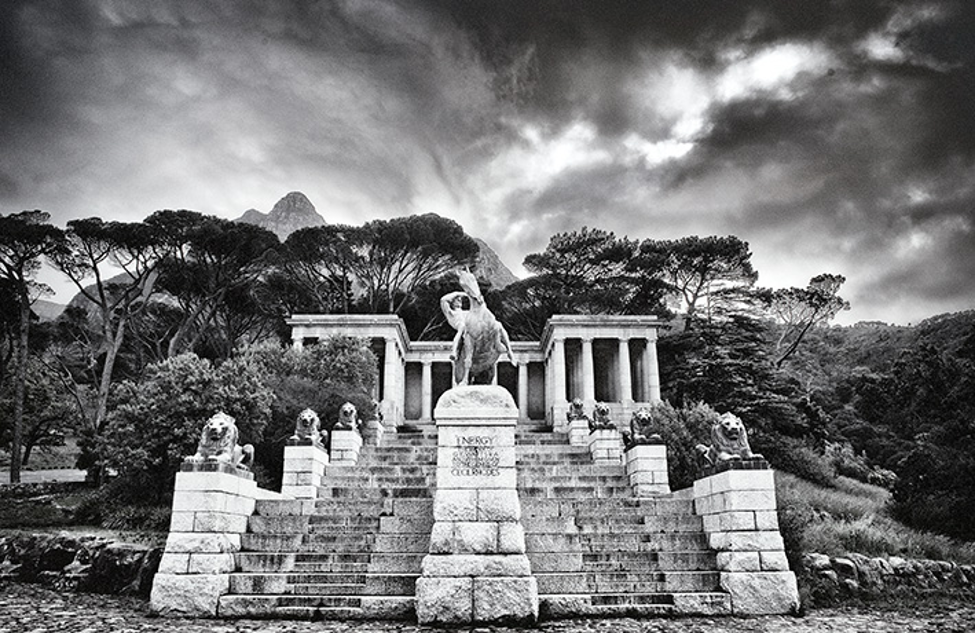 The Rhodes Memorial, situated in the Table Mountain National Park, Cape Town, South Africa. Although part of the Table Mountain National Park and World Heritage Site, the memorial deserves recognition in its own right, given its depiction of a formative individual in South Africas history and design by a leading architect, Sir Herbert Baker. Photograph by Chris Snelling, CC BY-SA 3.0.

The sculpture, formally titled ‘Physical Energy’, was first displayed in the courtyard of the Royal Academy in summer 1904. Like several commissions of the long imperial nineteenth century, the statue was then moved to a location in a British colony. In this case, the installation marked the victory of the British over the Afrikaners in the recently concluded war. As the centre piece of Baker’s memorial to Rhodes in Cape Town, the first bronze cast from Watt’s mould defines the space at Devil’s Peak on Table Mountain, which overlooks the city. The Cape Town statue is surrounded by eight lions modelled after those that circle the Nelson monument in Trafalgar Square.

The inclusion of lions at the Rhodes Memorial echoed the well-known London monument, connecting the metropole’s heart of empire to the centre of the British region of the Union of South Africa. The use of lion ornamentation also anticipates Sir Robert Williams’s later request for a statue of Rhodes to be installed on the vacant fourth plinth in Trafalgar Square. In the wake of this unsuccessful campaign, and since 2000, the fourth plinth has instead become a site for contemporary art exhibited on a temporary basis. Several of these installations have been by postcolonial artists, including Yinka Shonibare, whose work, with that of others, is transforming how race, empire, capitalism and commerce are merged in contemporary public art. Shonibare’s Nelson’s Ship in a Bottle — first displayed in Trafalgar Square and now on permanent display at the National Maritime Museum, Greenwich — uses Dutch wax printed cloth inspired by West African and Indonesian textile patterns for the sails of a ship.

From 1907 a second casting of G.F. Watts’s monumental sculpture was displayed in Kensington Gardens, close to the sculptor’s London residence. The description on the Royal Parks website notes the link between this statue and its replicas in parts of the former British empire. A third version of ‘Physical Energy’ was installed in Lusaka in 1959 as an homage to Cecil Rhodes. Lusaka was then the capital city of what was Northern Rhodesia (now Zambia), part of the Central African Federation which the British established to maintain control over its southern African colonies in the era of decolonisation.

With Zambia’s independence in 1964, the cast of Watt’s sculpture was moved to Harare, Zimbabwe. In May 1980, when Zimbabwe gained its independence, this statue was removed from its central location in Harare and placed in the National Museum of Zimbabwe. The original plaster model remains in The Watts Gallery in Compton, Surrey, from which a fourth model was cast in 2017. ‘Physical Energy is described as ‘monumental art for the nation’ by the gallery devoted to Watts’s work.  This cast was shown at the Royal Academy in 2017, anticipating its future installation on land close to the gallery in Compton. 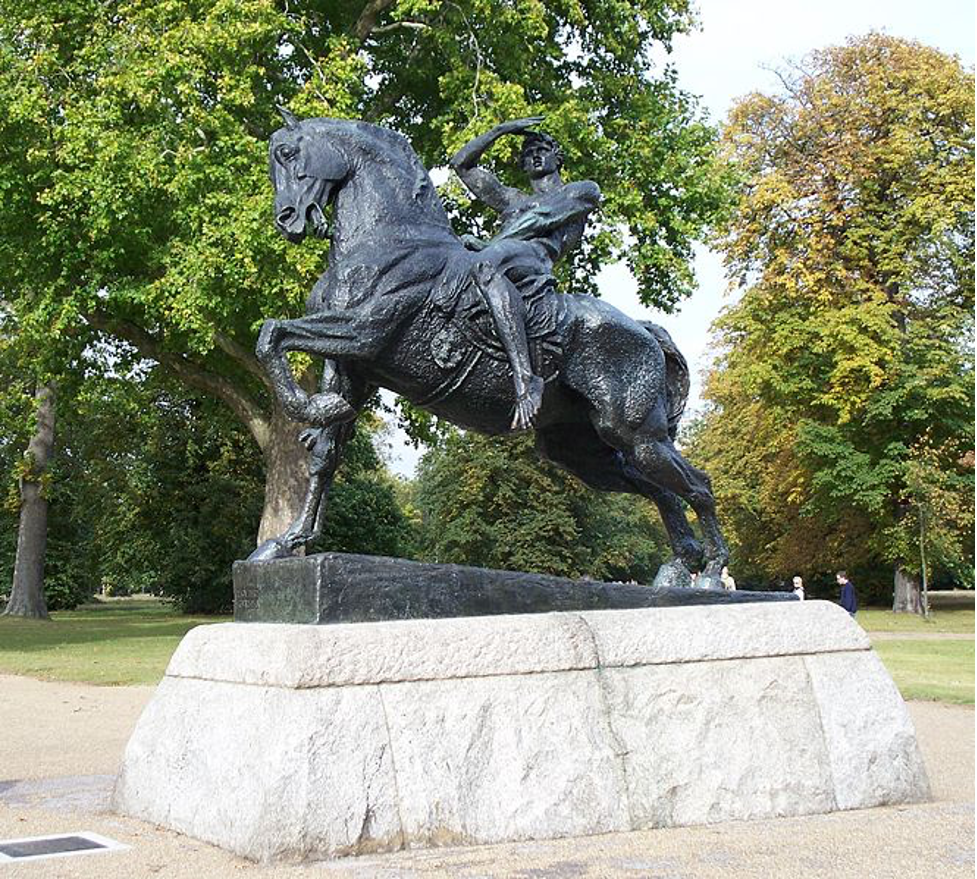 The irony of statues to commemorate Rhodes is that they were installed at moments of historical instability. The British empire was controversial when these monuments were commissioned and unveiled. Watts’s ‘Physical Energy’ statue was commissioned shortly after Britain declared its victory over the Afrikaners in southern Africa. The statues at Oriel College, Oxford, and the University of Cape Town, South Africa were installed at a time of intense nationalism and assertions of Aryan superiority. Oriel College has recently announced that the statue will remain where it is, even though an independent commission recommended its removal.

It is remarkable that officials and members of the Royal Fine Arts Commission refused a statue in London during the 1930s. The Lusaka cast of ‘Physical Energy’ was commissioned in 1959 to commemorate Cecil Rhodes as the founder of Northern Rhodesia, at a time when British officials hoped to maintain strong ties through the Central African Federation and — notably — while the Mau Mau insurrection was underway in Kenya. Commemorating the British empire through the figure of Rhodes was problematic in the past, as it is now. 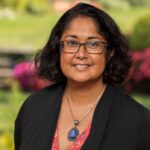 Professor Durba Ghosh is working on monuments, statues, and commemorations in South Asia and the ways in which public monuments and statues to mark India’s colonial and postcolonial histories struggle have become a part of the subcontinent’s political landscape.

As a part of that project, she is tracking replicas of sculptures that exist in the British isles and in different parts of the former British empire. She is on the faculty of history at Cornell University in Ithaca, New York, and the author of two monographs, Sex and the Family in Colonial India (2006) and Gentlemanly Terrorists: Political Violence and the Colonial State in India (2017).