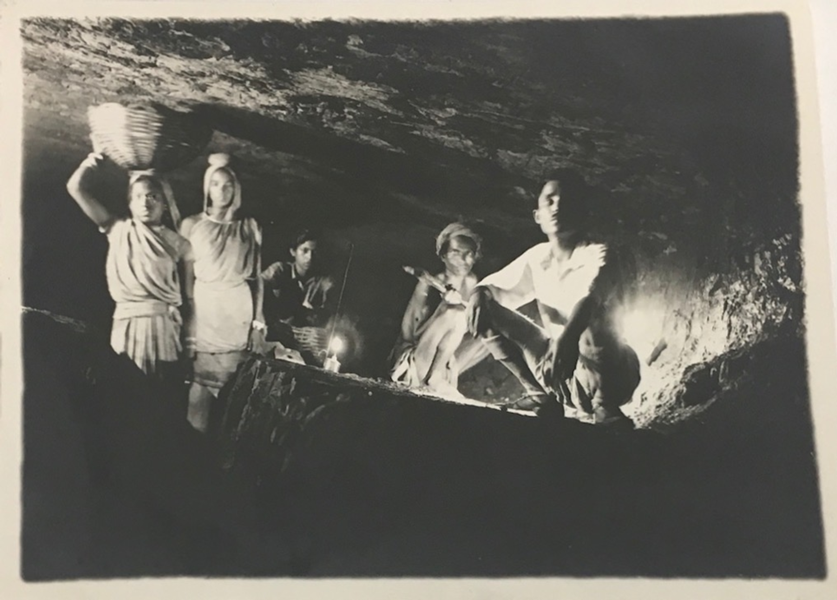 ‘The women had saved the situation’: Indian women’s work in war and famine

The work undertaken by lower caste Indian women during the Second World War is both surprising and shocking. For the latest post in the ‘Writing Race’ blog series, Urvi Khaitan — a current PhD researcher — reveals how tens of thousands of women worked above and below ground in Indian mines. Many others, victims of the Bengal Famine, were forced into the Labour Corps where they built infrastructures to support allied attacks on Japan. Looking back from 1945, this work was said in official circles to have ‘saved the situation’. But today the work and experience of Indian women remains all too little known.

Last year marked the 75th anniversary of the end of the Second World War. However, commemorative activity within India was relatively muted. In Indian public memory the nationalist movements, independence and partition dominate the narrative of the 1940s, with the events of 1947 closely following the massive socio-economic upheaval in eastern India brought on by war and famine. In the early 1940s, war brought galloping inflation, and the province of Bengal was hit with crisis after crisis: cyclones and tidal waves, famine, and epidemics were accompanied by a growing Japanese threat near India’s eastern borders. How did these huge changes in such a short period of time affect ordinary people, especially those leading the most vulnerable and precarious lives, i.e., women who were lower-caste or Adivasi (indigenous)? As families rapidly disintegrated, what were the implications for women’s work and survival?

I was drawn to the 1940s almost by accident while working on a Master’s project on women and labour in late-colonial South Asia. A couple of years ago — discouraged by archivists and historians who urged me to find something different to work on, being sceptical that I would find any ‘new’ material on women’s labour — I decided to take one final stab at searching through the India Office records in London. That day, I unexpectedly found hundreds of pages of material on how Indian coal-mining women were so crucial to the Allied Second World War effort.

It was quite a moment. To me it confirmed why it is essential to keep pushing back against assumptions about the marginality of women of colour; that there is so much hidden beneath the surface; that so much will remain concealed if we do not keep looking or if we do not ask of our archives questions that are just slightly different.

The racialised construction of wartime women’s bodies indelibly shaped their experiences, and the significance of race, along with gender, in relation to women’s histories and the histories of war and empire cannot be emphasised enough.

Women beneath the surface

Large numbers of women have always worked in coal mines in India. In the early 1900s, women comprised between one-third and half of the workforce underground and on the surface in mines in colonial Bengal and Bihar. At the time India was one of only three countries that allowed women to work underground (the other two being Japan and Russia; Britain had prohibited such employment for women and children in 1842). Miners, who were predominantly lower-caste or Adivasi, were identified by colonial state and capital as an ‘Indian aboriginal workers’, inferior to other Indian workers. They were cast as ‘undisciplined and indolent’ labour who ‘worked when they liked, retired when they liked’.

Women worked in a range of ‘unskilled’ roles such as digging, loading and carrying coal. Paid half the wages men received, women were a crucial reserve of inexpensive labour that had allowed mine-owners to avoid mechanisation. In the early twentieth century, a discursive shift towards seeing women’s bodies as needing protection coincided with the formation of the International Labour Organisation (1919) and a Labour government in Britain (1924). For parliaments and the press, the Indian mining woman embodied the exaggerated adverse effects of industrial working spaces on women’s motherhood, domestic duties and their morality. This led to perhaps the most significant protective labour legislation enacted by the colonial state with huge exclusionary consequences: the prohibition of women’s work underground, first enforced in 1937, gradually excluding 40,000 women over an eight-year period until just over 20,000 women continued to work above ground.

Barely six years later, in 1943, India was at war, and a vast amount of resources began to flow towards the Allied war effort from the subcontinent. A rapidly escalating fuel crisis forced the reversal of the interwar ban on women at the coalface. By 1945, 22,517 women were working underground and 49,828 above ground. They helped match production goals and prevented the monthly loss of 385,000 tons of coal. In fact, in the opinion of the Executive Council of the Governor General, ‘the women had saved the situation’ (Minutes, Executive Council Meeting, 31 January 1945, NAI 59/CF/43).

In Britain, the ‘Bevin Boys’ were conscripted to coal mines in 1943, but no similar mobilisation was extended to British women. Consequently, the employment of women in India sparked unprecedented outrage among the public, in the press, and in the British and Indian parliaments in India. Letters of protest were sent to Winston Churchill, Leo Amery, and others.

‘In our view it is fantastic to talk of a man-power problem in a Country of 400,000,000 people … Neither can we accept the argument that Indian women are “different”.’

‘They did work that, in this country, is done by pit ponies. They were actually strapped to the coal wagons, which they were compelled to haul along the roads and up steep inclines.’

However, comments such as these missed the central point. These women were battling the devastating Bengal Famine of 1943, and working in coal mines was one alternative to sex work or death. The colonial government was also disciplining miners through the threat of starvation, regulating their movement by withholding rations. The fundamental difference in attitudes towards work between British and Indian women, then, was rooted in ideologies of race and empire–where imagined superiorities in terms of race and class translated into misguided, discriminatory and, ultimately, extremely harmful labour policies and practices.

No Indian women’s history of the famine

While media coverage of the Bengal Famine focused on now-famous images of malnourished mothers with their children, there has been no Indian women’s history of the famine. Among the death toll of between 3.5 and 5 million people, male mortality was higher, but contemporary surveys show that women were disproportionately displaced, either on account of destitution or economic deterioration through loss of livelihood.

By May 1944, an estimated 292,000 women aged between 15 and 50 had been rendered destitute, over double the number of men in this situation. At least 3.8 million people saw a decline in their earning power. Destitute families from rural Bengal began flocking in search of food to urban areas, where gruel kitchens had been set up. A majority of the people leading these destitute units were adult women between the ages of 20 and 50, primarily from lower-caste backgrounds. 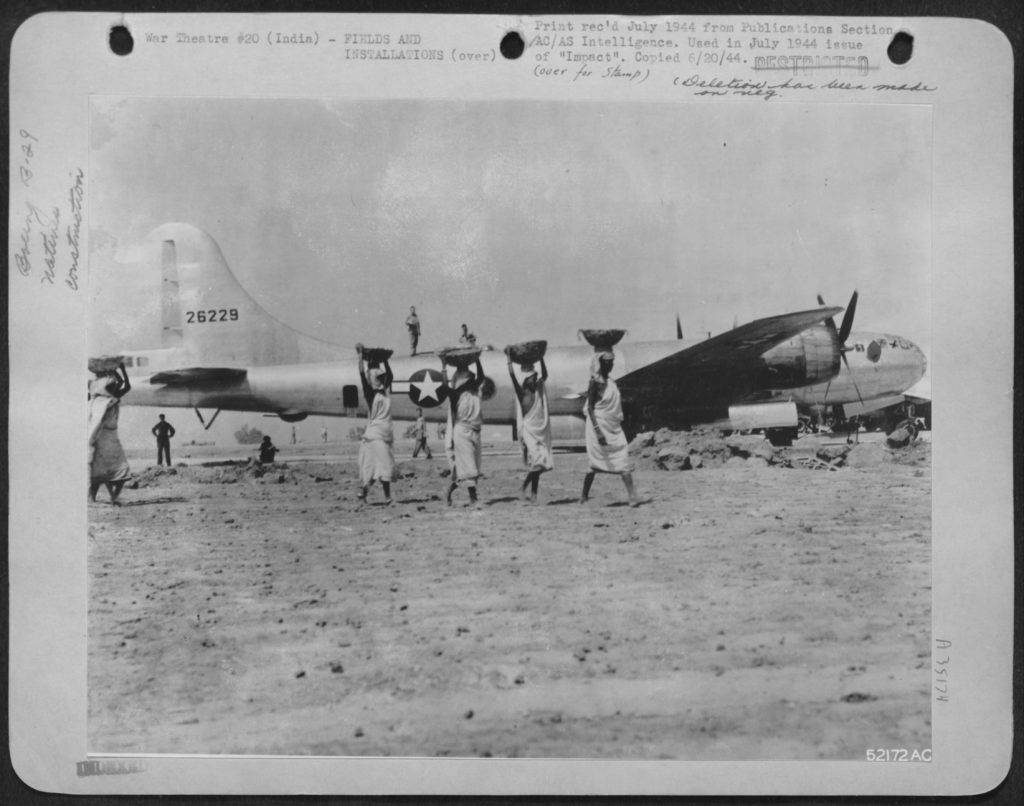 ‘Women of India cart away dirt and stones in baskets balanced on their heads during the construction of base in India. Hundreds of such women worked alongside the men.’ (342-FH-3A35174-52172AC, US Air Force Reference Number 52172AC.

Many displaced women and men signed up to the Labour Corps. These had been created to meet demand for an army of labourers to build bases for a joint British and United States campaign to reoccupy Burma and conduct raids on Japan. Contemporary accounts in US Army Air Force journals frequently highlighted the meeting between the ‘primitive’ East and the ‘modern’ West while authors complained about the slow pace and low productivity of unskilled ‘primitive’ ‘coolie’ labour.

At least 30,000 women (a conservative estimate) found themselves in the Corps. Many ended up there because of extreme economic distress, others were sold by families deprived of their property so that they could afford black market prices for rice. A highly organised trafficking ring took women to the Corps. Here, while they worked in aerodromes, in jetty-building, road construction, loading and unloading, and other kinds of manual labour by day, they worked as sex workers by night.

‘Everything is costly in Cox’s Bazar – only women are cheap. You can have them anywhere and everywhere.’

Women were employed through contractors, and informal methods of recruitment, payment and management exacerbated exploitation and the risk of assault:

The perhaps deliberate omission to regulate such a coercive labour regime raises questions about how much the colonial war machine was willing to overlook. In July 1945 the Labour Corps was shut down, but without providing alternative employment for the women who were once again without livelihoods. 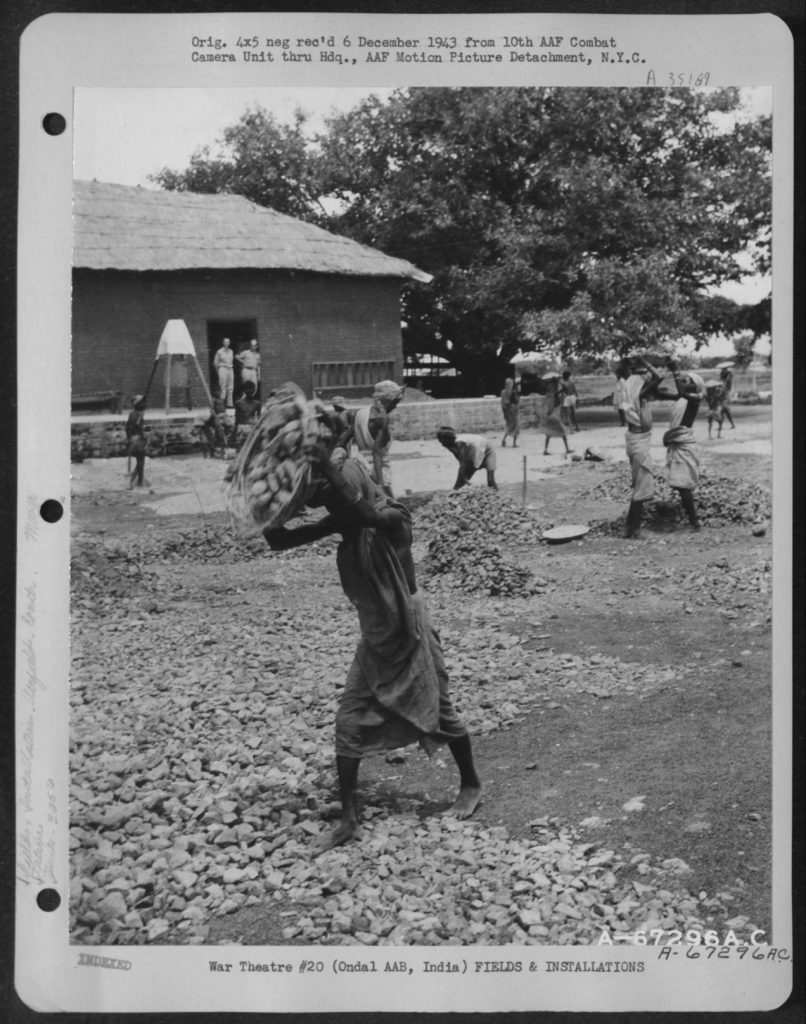 Wartime women’s lives differed vastly based on location. For the imperial project, the wartime imperative justified the dispensability of certain colonial subjects. Middle and upper-class Indian women largely escaped the ravages of the famine, and the diversity of experiences destabilises a monolithic understanding of female colonial subjects.

An intersectional approach to writing histories of wartime women is therefore essential: gender, race, class, caste and location must be considered in relation to one another. The histories of millions of low-caste and Adivasi women have been marginalised, but their experiences of the Second World War and their contributions to the Allied effort were by no means marginal.

Urvi Khaitan is a doctoral student in economic and social history at the University of Oxford. Her research interests lie in gender, labour and empire in twentieth-century South Asia, and her doctoral thesis focuses on women in the South Asian economy during the Second World War. Her recent publication on the Indian women coal-miners who proved pivotal to the Allied war effort is based on her MPhil project at Oxford, which was awarded the Feinstein Prize in 2019.