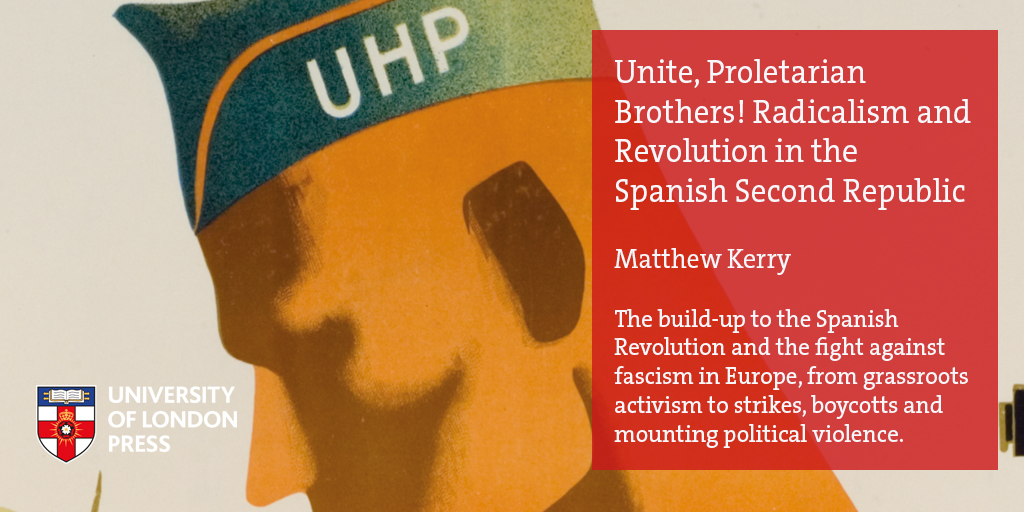 In this post, published jointly with the IHR, Dr Matthew Kerry (Stirling University) introduces his new book, Unite Proletarian Brothers! Radicalism and Revolution in the Spanish Second Republic, which was published by University of London Press on 30 September. Unite Proletarian Brothers! is the latest volume in the New Historical Perspectives series from the Royal Historical Society and the Institute of Historical Research.

Matthew’s book explores the dramatic left-wing rising that took place in Asturias, northern Spain in October 1934. The intensity of this event owed much to perceptions of fascist infiltration of civic life, and the equation of state suppression with fascist ambitions. When Matthew began researching his book in the early 2010s, these questions seemed to be historical problems to resolve. Today they appear more pressing.

Spectres of the 1930s are haunting the present. The rise of authoritarianism and right-wing populism, the demonisation of alien ‘others’, the casting of political opposition as sedition, and the erosion of democratic norms and values mean comparisons with Europe’s darker past are commonplace. The election of Donald Trump in 2016 prompted many to probe the possibility of a fascist regime in twenty-first America. As fresh elections loom—with US voters facing a politics increasingly framed in apocalyptic, Manichean terms, and a president openly declaring his willingness to disregard the result of the ballot box—the question remains pressing.

For a historian of 1930s Spain—a country plunged into a brutal civil war by a military coup in July 1936—open talk of civil war and the sight of right-wing paramilitaries operating with impunity on the streets of US cities is particularly chilling. But my intention here is not to overemphasise parallels with Spain during the Second Republic (1931-6) or suggest that Spain offers any clues as to the future path of the USA. Instead I want to reflect on two questions that form an important part of my new book—Unite, Proletarian Brothers!—which resonate with current events. First, I want to think about the wider implications of asking ‘is so-and-so a fascist?’, particularly in terms of how the term is translated from one context to another. Second, I’m interested in how the idea of fascism interacted with waves of state violence and protest through spring and summer 1934—the timeframe central to events in my book. The past holds no answers for the contemporary world, but it can help us ask questions to better understand the present. 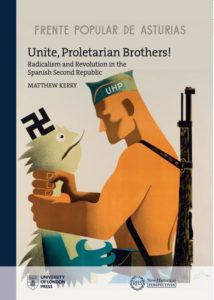 Unite, Proletarian Brothers! examines the origins, unfolding and consequences of a short-lived revolutionary insurrection, at times described as a ‘commune’, in October 1934 within the wider context of the Spanish Second Republic. This revolt centred on the coal valleys of the northern region of Asturias, from where thousands of left-wing militants marched on the provincial capital, Oviedo, and fought the Spanish army. In the rear-guard, committees proclaimed a revolutionary dawn and carved out a space for socio-economic experimentation, including a ban on money—actions with parallels from the Paris Commune of 1871 to attempts to establish ‘autonomous zones’ in US cities during summer 2020. Oviedo’s revolutionary dawn of October 1934 was to prove short-lived, however, and after two weeks the insurrection was crushed. Nevertheless, it stands as the most important revolutionary outburst in Europe between the early 1920s and the Spanish Civil War.

A central objective of my book is to understand the energy that lay behind the insurrection: why did thousands take up arms against the government only three-and-a-half years after many had celebrated the arrival of a democratic republic? Fascism and the politics of state violence play a crucial part in this story.

Traditionally, fascism’s role has been contextual in explanations of the Asturian October. Hitler’s appointment as chancellor of Germany in 1933 and the crushing by Dollfuss of Austrian socialism a year later formed an important backdrop for Spanish leftists looking beyond the Pyrenees. But there is more to the events of October 1934. Since the previous spring fascism had become an increasingly important element of the political lexicon in Asturias. As today, leftists were taxed by the question of translating fascism into a national context divorced from its origins. Was fascism simply old wine in new bottles—a new label for monarchists and the political right? Or did it threaten something new? The possible relationship of fascism to Catholicism in Spain was particularly vexing.

The difficulty for left-wing militants is that there were few, if any, self-proclaimed or identifiable fascists in the Asturian coal valleys in 1933. This was due in part to the absence of actual local fascist organizations (the Spanish fascist party was not founded in the region until spring 1934), but also to the difficulty of defining the parameters of fascism. Activists resorted to explaining its absence in the streets by pointing instead to fascism as a hidden, conspiratorial threat that drew on existing tropes of ‘Jesuitic’ conspiracies. Victory for the right in the national elections of November 1933 led socialists to re-evaluate their communities. In the face of a higher than expected vote share for the right, the Left’s understanding of the local community was severely challenged. Now fascism—which still lacked a visible presence on the streets of the coal valleys—had to exist. The situation provoked intense anxiety that fascism was a creeping, covert threat. This, in turn, prompted increasing demands for fellow militants to act. The particular translation of fascism into the context of the Asturian coal communities shaped everyday actions by left-wing militants.

There are parallels here with the motivations for political identification in 2020. Widening our own inquiry beyond whether an individual is fascist to the presumptions and implications that inform this very question may provide greater insight into present-day society and politics.

To explain the energy of the Asturian insurrection in 1934, however, requires going beyond the language and conceptualisation of fascism. Rather we need to appreciate how these perceptions of far-right activism combined with fears about the new centre-right government’s possible slide into authoritarianism—and from there to more overt forms of fascism. Such anxieties were rooted in readings of the international context: recent dictatorships in Germany and Austria had been established through political machinations and legal machinations from above. What exacerbated fears in Asturias was a new heavy-handed policing strategy which served to materialise and render plausible the threat of authoritarianism in everyday life. This took the form of searching workers and left-wing political centres for arms in order to combat unrest. 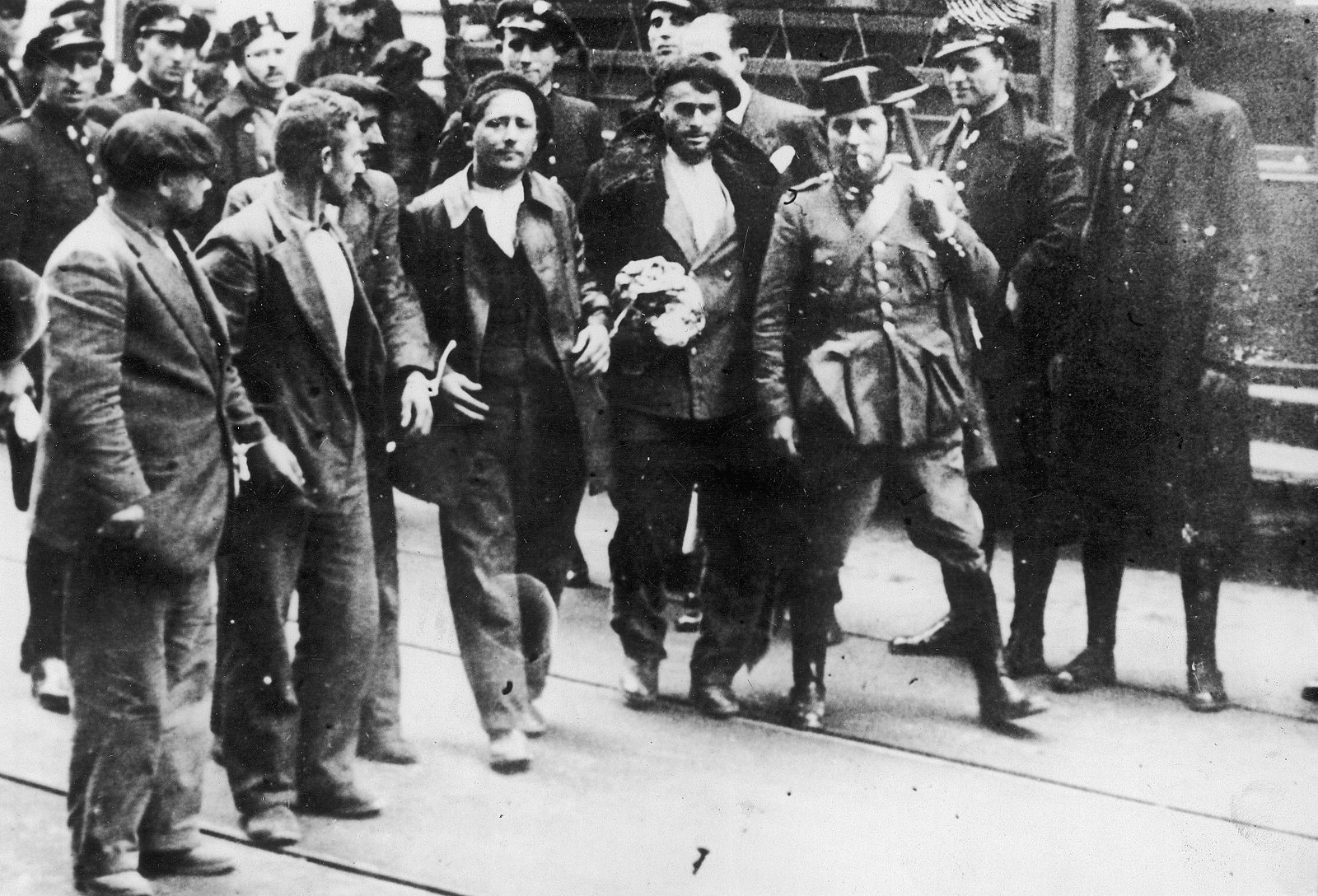 Workers arrested by the Guardia Civil and Guardia de Asalto during the Asturian Revolution, October 1934

There was already little love lost between the national police forces, the Civil Guard, and the working -class left. However, the actions of the police were qualitatively different in 1934, and sparked escalating waves of demonstrations and strikes. Previously, policing and protest had displayed an implicit choreography: the Civil Guard and left-wing militants understood one another’s role. Yet in spring 1934 policing crossed a threshold, literally and figuratively. Mass searches of workers’ centres, their bodies and their homes were an escalation in tactics. In response, the number and intensity of strikes and demonstrations rose sharply. The searches brought home, on a personal and intimate level, the change in the political direction of the country. Left-wing militants accused the government of betraying those who formed the backbone of support for the Second Republic and of deploying tactics used in colonial warfare against them.

The strikes and demonstrations were exacerbated by the refusal of the civil governor, in contrast with previous occasions, to mediate or diffuse the situation. In similar scenes to those recently observed in the US, calm was only restored once the police withdrew. On several occasions in spring 1934 trade unions kept order on the streets. In doing so they offered a powerful expression of an alternative political order and of the impossible coexistence of the police and protestors.

This intersection of the language, presumption and now apparent manifestation of fascism created a fissure between the state and society. In the Asturian coalfields the maintenance of public order became increasingly politicised and disputed. By the end of summer 1934, the socialist press consistently described the police as an ‘occupying army’, warning darkly that armies caused wars. This created an extremely fragile environment. When it came in October, the spark for the Asturian rising had its origins in Madrid. The entry into government of a right-wing party with dubious republican credentials triggered half-made plans by the socialist movement for revolt. Yet events in Madrid are incapable of explaining the magnitude of the insurrection in Asturias. 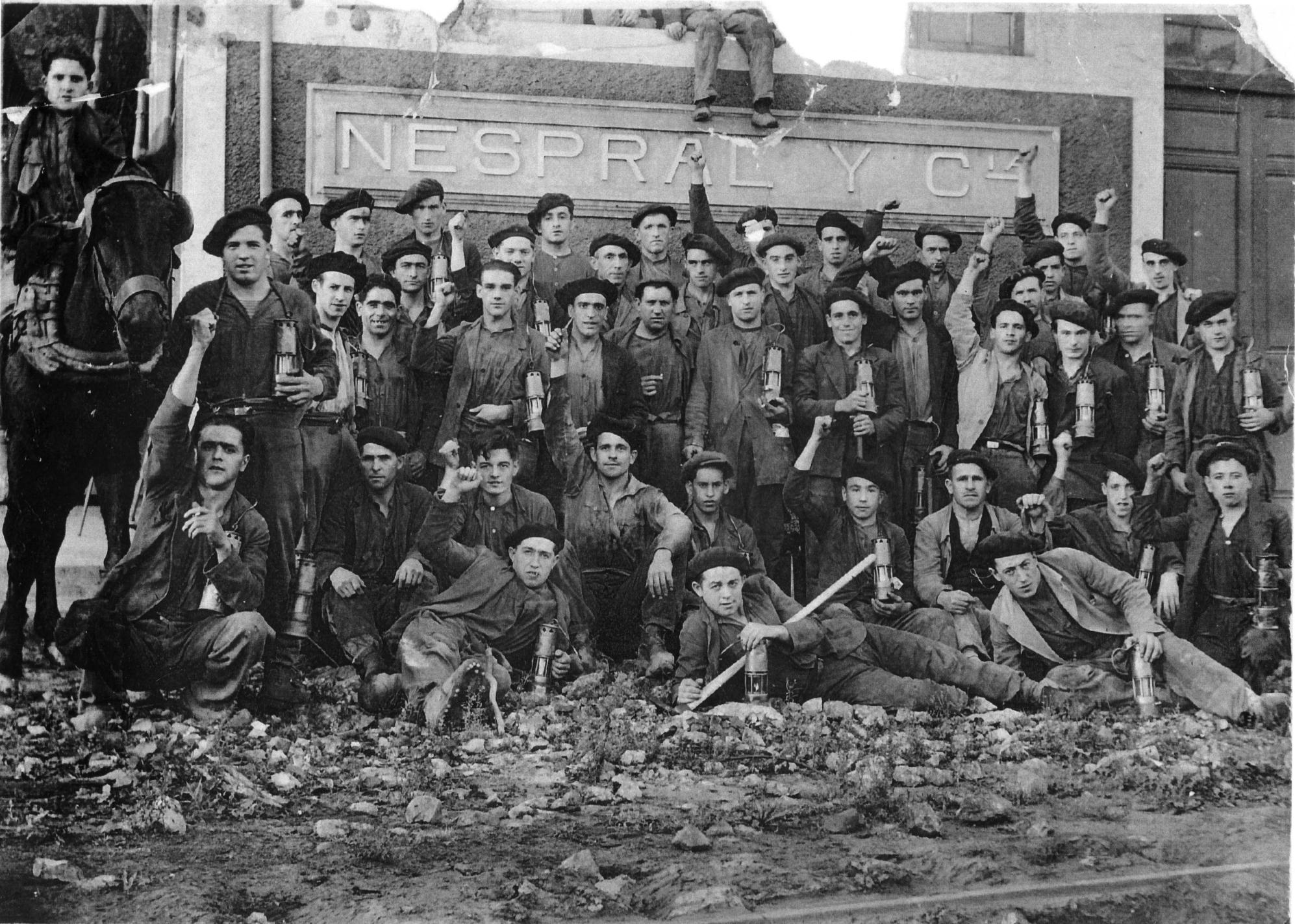 When I began the PhD on which my book is based, the subject seemed refreshingly historical. From the perspective of 2011, the combination of a mass left-wing insurrection in a coalmining area within a wider context of fraught, intense political struggles was appealing for the contrast it appeared to offer to twenty-first century politics. Only after completing my doctorate in 2015 did subsequent events like the emergence of Corbynism and Brexit in the UK, and the election of Trump in the US, make themes of left-wing radicalism, fascism, political polarisation and even ordinary people ‘taking back control’ seem much timelier.

Spain in the 1930s is no oracle for what may happen in the United States or in the wider world over the coming months. Even so, historical examples can help us dissect the present by encouraging us to think carefully about the questions we ask and the scales of analyses we use. Examining the events of the 1930s—even in the most unlikely context of the coal valleys of northern Spain—can help provide us with more informed approaches to the present via the past. For example, if the fascist precedent is reduced to the case of 1930s Germany, what is being done and lost in such a comparison? How far do ideas of fascism cut through and fuel or influence actions on the ground?

Similarly, my approach to the Asturian October encourages us to think about the complex interaction of local, national and international politics, and how everyday realities can be read through wider lenses. Such an approach can help us gain a richer understanding of episodes like the violence in Portland, for example, by encouraging us to look beyond the prism of national politics that dominates the fast-paced, superficial cycle of international news offered to external observers. There are many ghosts from the 1930s that can help us interpret the present beyond the one sporting a toothbrush moustache.