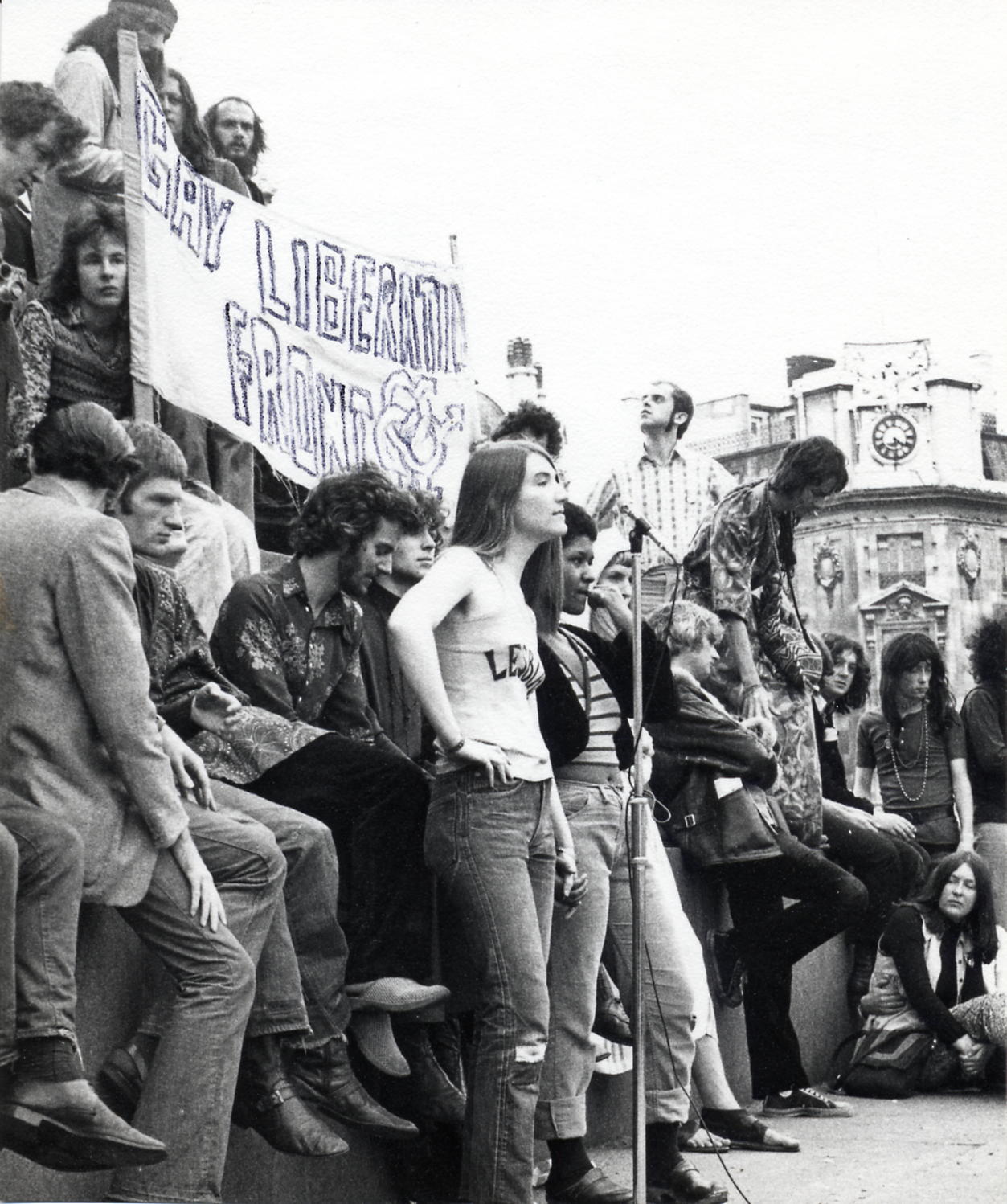 Dr Craig Griffiths is Lecturer in Modern History at Manchester Metropolitan University. He is a historian of twentieth-century Europe, specialising in modern German history, queer history and the history of sexuality. He is a co-founder and convenor of the History of Sexuality Seminar at the Institute of Historical Research, an associate of the Raphael Samuel History Centre, and a member of the German History Society. His new book, The Ambivalence of Gay Liberation: Male Homosexual Politics in 1970s West Germany, will be published by Oxford University Press in 2021.

Since my appointment at Manchester Met in 2016 I have sought to integrate LGBT+/queer content and themes into the history syllabus, as well as reflect on how I teach this material, given the extremely wide range of our students’ academic attainment. In so doing, I am conscious of the debt I owe to several colleagues seeking to better integrate race and gender into our curriculum, as well as to multiple queer historians from other institutions whose work I have found indispensable.

In a first-year module, ‘Europe in Turmoil 1900-1939’, I am able to introduce students to the history of sexuality early on in their degrees (albeit only in a single lecture). I take the opportunity to get them to think about the “invention” of homo- and heterosexuality in the late 19th century. I don’t really get chance to deliver much content in this lecture, but I do hope that it prompts some students to question their assumptions about supposedly “natural” phenomena (which would then be transferable to other themes, including race). In any case, discussion of historical sex scandals seems to attract their attention!

At the start of every module I teach (whether queer or not), I ask students why they chose the course. The first time I taught the Queer History module, this resulted in something of a collective “coming out”, in that about half of the dozen or so students linked their choice of module to their personal identities. This was empowering, I felt, both for myself and the students concerned, but also risked giving rise to the impression that only queer students should be interested in taking this module (I absolutely want ‘straight students’ to take and enjoy the module, too). I have since experimented with this question, sometimes using alternatives such as ‘what most interests you about this module?’ This is a difficult balance, because the inclusion of queer content in the syllabus might well be most important for LGBT+ students—and for perfectly good reasons. But, occasionally I have had to reflect on ways to make other students feel “welcome” in the module, and to remind students that ‘queer’ speaks to heterosexuality, not just to homosexuality.

When designing my final-year undergraduate module ‘A Queer History of the Twentieth Century’, I found the collection of syllabi hosted by the Committee on Lesbian, Gay, Bisexual and Transgender History an incredibly useful resource. I make no claims to have reinvented the wheel! I decided to structure the module chronologically; it is organised around events with which students will already be familiar (including the two World Wars, the Cold War, the ‘sexual revolution’, and neoliberalism).

This structure is not particular queer in form. However, since I wanted to use ‘queer’ to defamiliarise sexual categories, prompting students to radically question preconceived notions and identity terms, I felt that it was important to offer students a framework which would be recognizable to them. This is especially important for those students who may not have encountered ‘queer’ before.

In any case, such events as the two world wars have played key roles in the development of queer consciousness and ought to be included on such a module (especially one that runs across the year, with 22 sessions to be filled).

For two years, I co-taught a second-year module with Dr April Pudsey, a classicist, called ‘Between the Sheets: Sex and Sexuality from the Ancient World to the Present’. This isn’t a specifically LGBT+ module, but the cross-period approach helped students grasp that different societies in different periods have conceptualised sex, gender and sexuality in contrasting ways. This can help students think critically about language and categories which they otherwise might have been tempted to use unthinkingly. Such a cross-period approach does depend on co-teaching and bringing in colleagues with differing expertise and specialisms (or the confidence, which I do not always possess, to step outside period comfort zones).

Of course, this does depend on teaching styles, but also to what extent students are familiar with, or interested in, questions of theory. When introducing LGBT+ themes on survey units earlier in the degree programme, I have sometimes sidestepped these differences, given that it takes space, reflection and reading for students to grasp the conceptual challenge of queer. Reducing “queer” to ‘it’s more complicated than this, but…’ is far from ideal, but I have tried to be realistic about how much time is available in each lecture, in order to get the balance right between coverage and nuance.

In “everyday” discussions with students, in core European history survey modules, I nevertheless try to get them to question some assumptions about gender and sexuality, even if there is little space or time for conceptual depth. For example, I might remind students that when talking about prostitution, male prostitution matters too, or when talking about “horizontal collaboration” or other erotic attachments in World War Two, that the direction of these attachments was not always heterosexual. It is possible to do this even if the structure of the module does not readily allow a more thorough “queering” of the content. In particular, the selection of primary sources, and the stories and lives that these shed light on, provide an excellent opportunity to ask these kinds of questions. 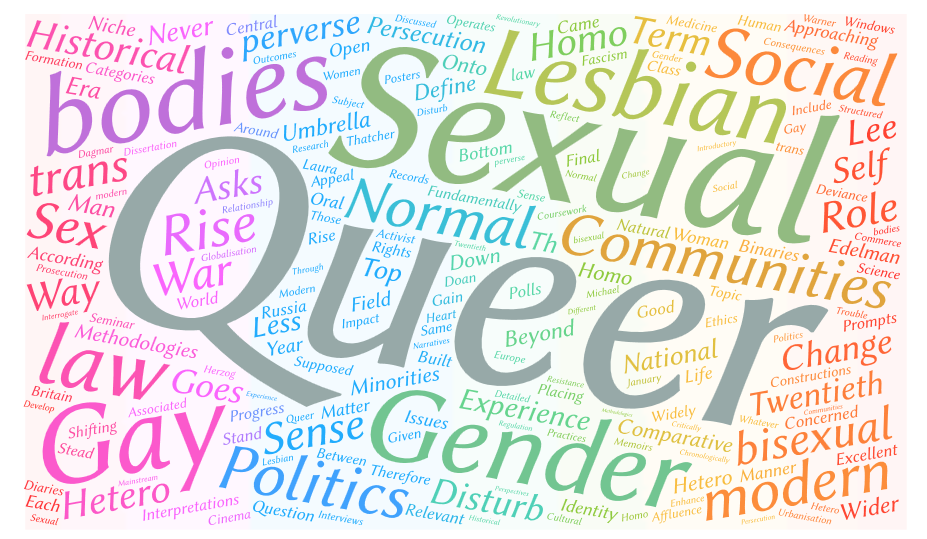 I am fortunate to work in a supportive environment (I remember my research and teaching specialism once being referred to as my “special interest”, but happily this attitude is not representative of my colleagues). Nevertheless, I remain concerned about being pigeonholed, or allowing LGBT+/queer content to be “ghettoised” in one or two modules rather than being spread across the syllabus (or calling aspects of that syllabus into question). I don’t have an easy answer to this, beyond saying that it is surely not a case of either/or. In the latter case, the responsibility to diversify or to “queer” the syllabus cannot be allowed to fall only on the shoulders of those who would see themselves as queer historians; it is incumbent on all historians in a department to contribute to this process. An analogy can be made here to experts in the history of race and black history, and the imperative for all academics to think about ways to decolonise the curriculum.