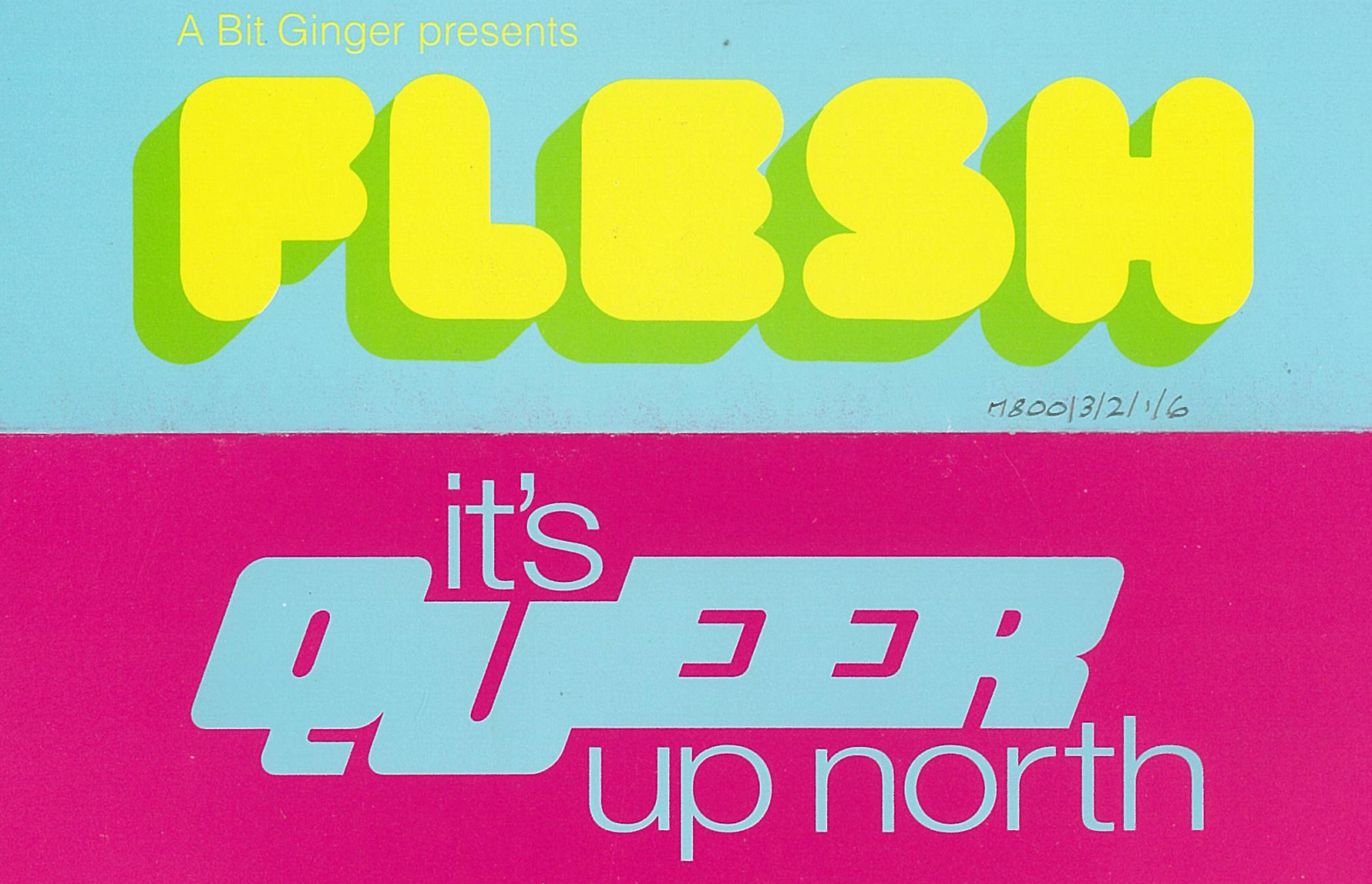 From the Hacienda to Hagiography – Bob Mills 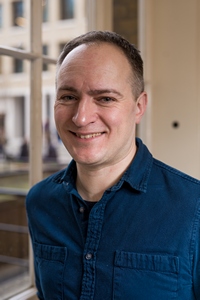 Professor Bob Mills is Professor of Medieval Studies and Head of the History of Art Department at UCL. Between 2015 and 2018 he directed UCL’s queer research network qUCL and has been a member of its LGBTQ+ Advisory Group since 2012. Previously Bob was director of the Queer@King’s research centre at King’s College London. His research focuses especially on representations of gender and sexuality in the Middle Ages and he has published books on medieval sodomy and on the queer British artist Derek Jarman. Bob has also published numerous articles on topics ranging from transgender saints to queering the museum and regularly integrates this research into his teaching. He is also passionate about making queer and LGBT histories accessible to wider audiences through activities such as walks and exhibitions.

I inherited my love of history from my parents, who were both history teachers at a secondary school in Essex and who were no doubt pleased when I chose to do a History A-level. A particular high point of the History A-level up until the 1990s was the opportunity to pursue an Individual Study, a piece of original research undertaken by the student on a topic of their choosing. For my own Study, I decided to focus on events leading to the execution of Anne Boleyn. This occasioned my first encounter with issues that would later come to define my work as an academic.

I was particularly intrigued by an argument put forward by the historian Retha Warnicke that Boleyn’s fall wasn’t simply attributable to a factional conspiracy by Henry VIII’s minister Thomas Cromwell but was grounded in social and religious attitudes in the period. Warnicke pointed to superstitions surrounding the birth of monstrous babies and the association of incest and sodomy with witchcraft, which she suggested contributed to a climate of fear in Henry’s court that precipitated Boleyn’s downfall.

I had the chance to deepen my understanding of these topics in the Seeley Historical Library at the University of Cambridge, where I was granted special permission to work despite still being a sixth former. At the Seeley Library I consulted some of the original sources underpinning Warnicke’s study and became engrossed. There I was, aged seventeen, boning up about medieval and early modern attitudes to gender and sexuality.

At the time I wasn’t ‘out’ and it felt somewhat subversive to be researching topics such as sodomy. In the late 1980s and early 1990s tabloid newspapers were engaged in a full-fledged assault on queer identities and bodies, characterising AIDS sufferers as infective plague-carriers whose illness was conceived as punishment for immorality. Through researching Boleyn’s fall I became aware of resonances between the queer-eradicating impulses of the contemporary British press and those of the Tudor court.

Studying history gave me an outlet for productively channelling the anger I felt about this climate of moral censure.

Around the time I was researching the fall of Anne Boleyn I was also making up my mind about where to go to university. I’d been offered a place to study Anglo Saxon, Norse and Celtic at Trinity College, Cambridge, but decided to turn it down. Instead I opted for a BA in Medieval Studies at the University of Manchester. Who knows why I decided to become a medievalist as a teenager, but I was particularly drawn to the programme’s interdisciplinary structure.

My decision to go to Manchester was ultimately determined more by personal factors than by my education. I had my first serious crush on a boy when I was 10 and I knew I was more attracted to males pretty much from that point on. But growing up in a village in north Essex, and going to a secondary school where homophobia was rife, I felt that I wouldn’t be able to tell anyone my secret unless I got away to a big city. It wasn’t until my second term at Manchester that I ‘came out’: I put in a call to the student-led counselling service Nightline, which took great courage as I had to use a payphone in my hall of residence. The counsellor I spoke to suggested that I might meet like-minded people if I showed up the next day at a preliminary training session for new Nightline volunteers. I went along and it was the best decision of my life. Some of the friends I made then are still friends now. And before long I was enjoying the benefits of Manchester’s burgeoning queer scene.

In the early 1990s, Manchester was one of the best places in the UK to be gay and my first experience visiting a gay club was in early 1992, when I went to a night at The Haçienda called ‘Flesh’. This had been billed as an alternative to the mainstream gay scene and was promoted as a night of ‘serious pleasure’ for ‘Queers’. Queer was a much-discussed term at the time: for some it was offensive, while others saw it as a point of focus for political activism.

During my childhood queer had been used almost exclusively as a term of abuse and I remember my primary school teacher once lamenting in class the fact that even the word ‘gay’ didn’t mean what it used to anymore. These debates gave me a strong sense of the shaping effects of language on sexual and gender identities through time.

As an undergraduate, I remember plugging words like ‘homosexuality’ and ‘gay’ into the university library catalogue. A handful of books came up in the search, including a certain volume on the history of sexuality by one Michel Foucault. But unequipped as I was then to grapple with its contents, Foucault’s work seemed rather inaccessible and arcane.

What I really wanted was a sense of how my own developing identity as a gay man was rooted in some kind of history.

I found some answers in a celebrated book by the historian John Boswell, published in 1980. In Christianity, Social Tolerance and Homosexuality, Boswell hypothesized that, whether or not they called themselves ‘gay’ in the past, it’s possible to chart a history of gay people across time. These views proved controversial and have continued to provide grist to the mill in the decades since. I’ve spent much of my career contributing to those debates. But my early encounter with Boswell’s work also taught me the sheer power of history to affect us emotionally as well as intellectually, and the past’s role in grounding a sense of community. ‘Gay’ history, ‘queer’ history, LGBT history – whatever name we choose – is vital in building a sense of collectivity, a sense of partial connection to others both now and in the past.

I identify as a gay man and he/him are my preferred pronouns, but I don’t feel strongly invested in masculinity as a binary category. When I was in primary school I played with dolls, most of my friends were female and I remember sometimes being told by my male peers to get into the ‘girl’s line’ when we queued for lunch. I don’t claim trans identity, but these early experiences were formative and have given me a strong sense of affiliation with anyone who finds themselves being misgendered or treated differently because they don’t conform to stereotypes.

While working on my book on sodomy I became fascinated with the visual culture surrounding Saint Eugenia, who according to her hagiographers was born female but spent many years dressing and living as a male monk. In 2018 I published an article in which I filter depictions of Eugenia’s life through a transgender prism. I was especially intrigued by imagery showing the saint being placed on trial for attempted rape: some artists presented the saint with short hair and a tonsure while exposing her breasts to prove her innocence, troubling binary gender in ways that appear partially to resonate with some modern-day expressions of gender queerness. 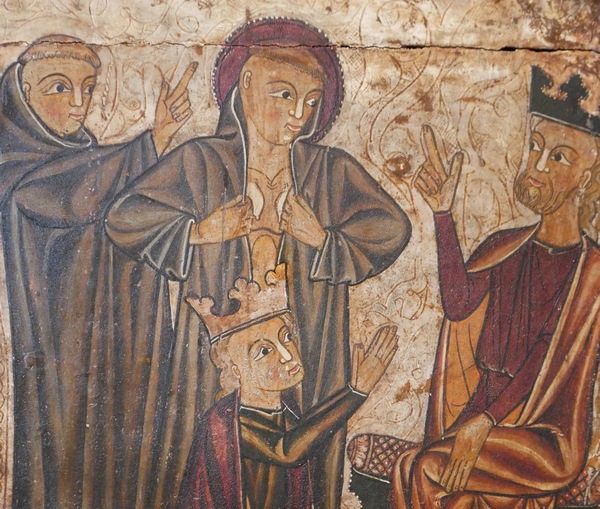 In recent years I’ve also pioneered activities such as developing a queer-themed walking tour of my university and local area, and curating an exhibition about UCL’s own queer histories, as a means of fostering a sense of solidarity among staff, students and the wider LGBT+ community. Not being LGBT+ wouldn’t inevitably prevent me from working on such projects but having a personal investment has certainly been a motivating factor.

I don’t necessarily believe that the best historical scholarship is or should be ‘dispassionate’ or ‘disinterested’. Whether we choose to admit it or not, the way we represent the past will always be passionate and interested on some level, directed at transforming the world through what we know.