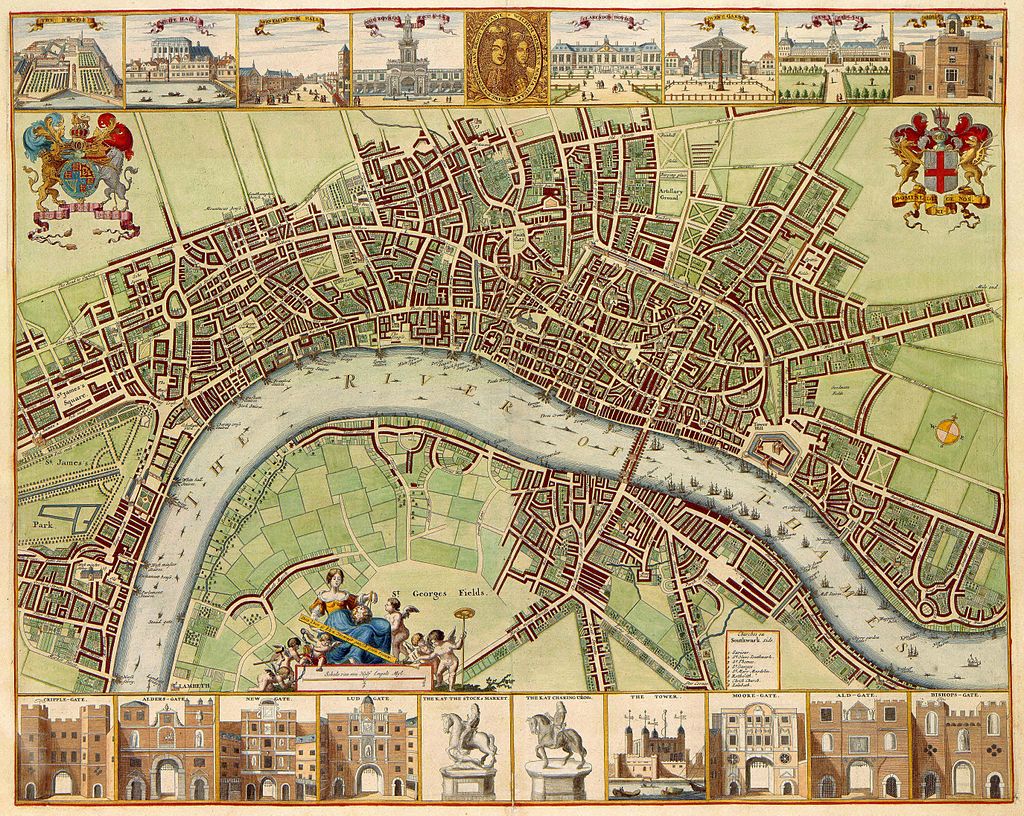 Early in March, it became clear to the organisers of the Science in the City 1500-1800 conference that their event could not go ahead as planned in early April. So they took it online. In this post, Dr Rebekah Higgitt shares her experience of rapidly re-thinking a conference and delivering it virtually.

The Metropolitan Science project team and I made the decision not to reschedule or cancel Science in the City 1500-1800, which had been scheduled to take place at the Science Museum in London on 6-7 April, but to instead push ahead with online delivery. We had a fantastic programme, good numbers registering and, with the project’s end looming, a time limit on when the event would be most relevant and useful.

We were delighted by the huge amount of goodwill that was generated by our decision. Most of our speakers gamely took on the challenge of pre-recording or pre-writing their papers and well over 100 potential attendees signalled their interest. Meanwhile, the project team (two of whom, Jasmine Kilburn-Toppin and Noah Moxham, also had papers to write and record) got to grips with the mechanisms for delivery.

Working on the assumption that participants had already committed two days in their diary to the event, we decided to stick closely to our original schedule. If we had not already published a programme, we might have spaced things out a bit more but, although intense, our busy schedule helped create the sense of an event and conference community. Details of the original programme can be compared to the event that actually took place.

We released the papers online according to the programme, allowing 50-70 minutes for participants to watch or read three or four papers, before opening a live meeting on Zoom for 40-50 minutes of Q&A and discussion. Over the two days there were four paper panels, interspersed with breaks. On both days before lunch (for those on the right time zone!) there was something a little different: a live webinar introducing the Layers of London digital mapping project and a virtual tour of the Science Museum’s Science City gallery. We had a fantastic keynote lecture by Pamela H. Smith (viewable here) and a concluding discussion.

Given the swift turnaround, we largely left it to our speakers to decide how to deliver their papers. In a fully planned online event it would make sense to limit the possible formats to ensure they can be shared successfully. Relying on the skills of project researcher Daniel Belteki, we were able to upload recordings (mostly PowerPoint files) as unlisted YouTube videos which could then be embedded on our low-budget WordPress website. If you have time, we would recommend testing this in advance: it took more processing power than the team’s laptops supplied, so we had to rely on favours from friends.

The days before the conference were very busy, dealing with up- and downloads and communications with our speakers. We drafted and pre-scheduled blog posts for each session, ensuring that these linked to the right content and had accompanying tweets. Zoom meetings were also pre-scheduled and added to the posts, and we wrote some guidance for participants. Relevant links and timings were shared with speakers.

Zoom was as new to the team in March as it was to most academics. A note of caution from project Co-I Alison Boyle led me to some “Zoombombing” horror stories on Twitter – disrupted vivas and seminars suggested that early modern history was not too dull to target. Fortunately, there was good advice available from Wired and Zoom, much of it now offered by the RHS too. The key points for us were:

The online meetings started a little ahead of the advertised time to ensure panellists were settled and team members could be made co-hosts. We were, perhaps, a little overcautious in our use of the Waiting Room initially and one or two genuine participants were excluded. It is worth letting everyone know in advance that they should display their full name. The chair took on the usual responsibilities of introducing panels and calling for questions and comments. We asked people to use the Chat function to indicate if they had a question, which formed a clear queue. Chat also allowed people to make comments and share relevant content.

Things that could have worked better

We wanted to keep the conference as open as possible by simply sharing content and links on the website. However, this meant that we did not have formal registration mechanism or a means of communicating directly with everyone. This was something that many expected and would probably be worth doing in future. I did open up an editable document for people to share their details and interests with each other. I had hoped that this might lead to some sub-meetings on Zoom but it appears that even informal sessions need to be more formally planned.

For some attendees, online participation may have been intimidating or unfamiliar. They perhaps felt more uncomfortable about asking a question in this situation than they would have been in shared physical space. The questioners were a fairly small proportion of the audience, and many were known to the team, but this is often the case in physical conferences too. Organisers can think about the order and mix of speakers in panels (evidence of clicks and views suggests it was a slight benefit to go earlier in a panel, something that might prompt different choices in future), but the online format made it harder to encourage questions from individuals from underrepresented groups.

Although Twitter allowed some break-time chat, everyone acknowledged and lamented that we could not replicate the informal conversations and chance meetings and discoveries that can happen during tea breaks and conference drinks.

The conference was intellectually satisfying, very cheap to put on and gave us a larger and more diverse audience than we would otherwise have had. We avoided the carbon footprint of air travel and yet managed to connect people in North and South America, right across Europe and Asia, and down to New Zealand. We catered better to some time zones than others, but people from right around the world joined us for at least part of the event. Once online, the papers were all available for several days, and most for much longer. 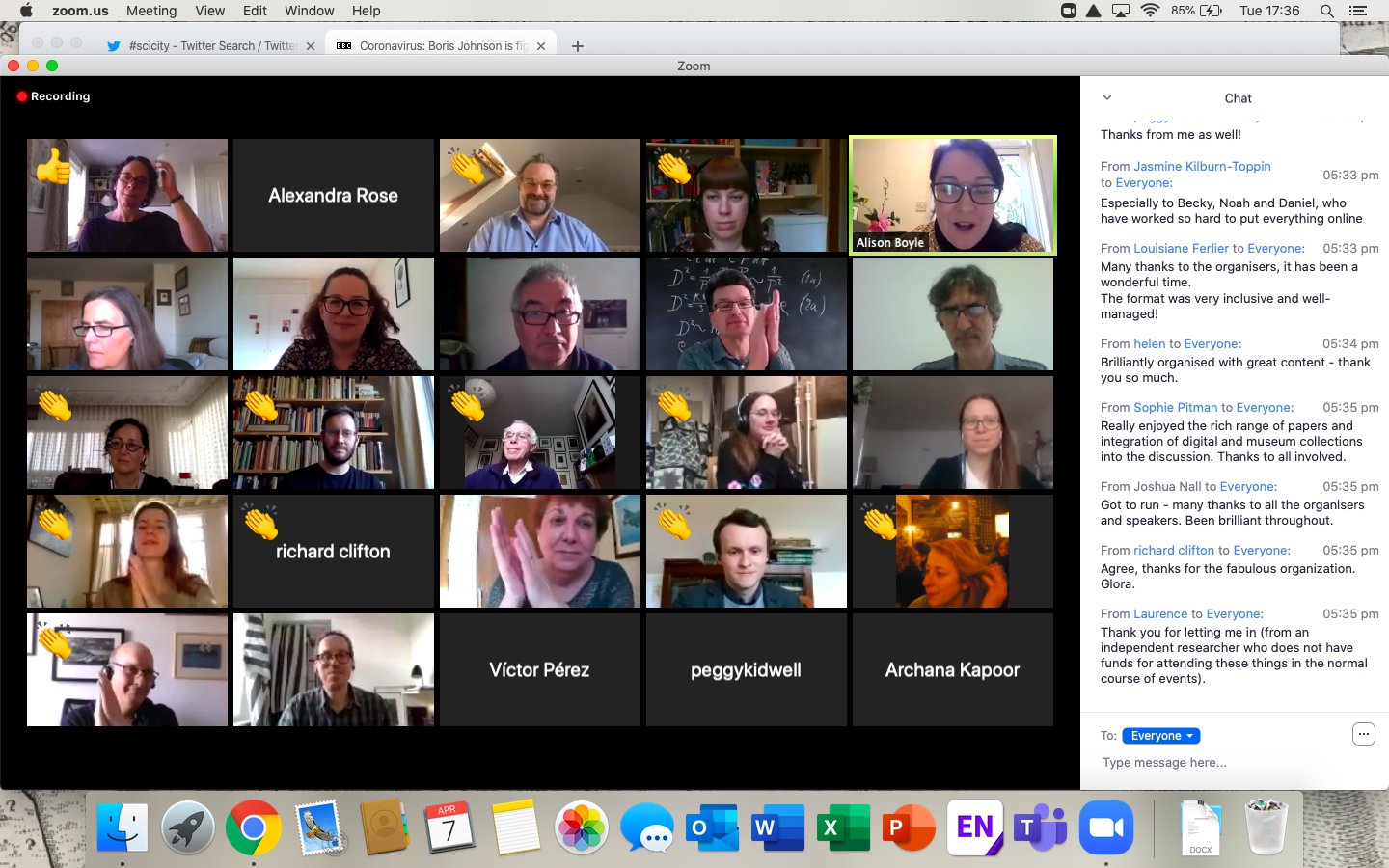 A round of applause on Zoom. Credit: Alexandra Rose

In general, feedback was positive and many expressed their gratitude. Most were pleasantly surprised by the quality and clarity of discussion that Zoom allowed, though free-form discussion was more difficult. Comments suggested that some non-academics felt particularly welcome. Certainly, being free made it accessible, as perhaps did avoiding an institutional setting. On average, younger scholars may have had an advantage over senior ones in being more familiar with digital formats, both as speakers and audience, although we are all becoming increasingly adept.

For those engaged with the whole event there was a sense of connection and communication that, in these times, felt very welcome. And, as we recommended at the end of each session, a good way to finish is to ensure you’re switched to gallery view and encourage participants to use the ‘Reactions’ button to enjoy a round of virtual applause.

Rebekah Higgitt is a Senior Lecturer in the School of History, University of Kent and Principal Investigator on the Leverhulme-funded “Metropolitan Science Places, Objects and Cultures of Practice and Knowledge in London, 1600-1800” project. From 2008-13, she was Curator of History of Science at the National Maritime Museum and Royal Observatory Greenwich. She is author of Recreating Newton: Biographies of Newton and the Making of Nineteenth-Century History of Science (2007), co-author of Finding Longitude (2014), editor and lead author of Maskelyne: Astronomer Royal (2014), and co-editor of Navigational Enterprises in Europe and its Empires, 1730-1850 (2015). From August 2020 she will be Principal Curator of Science at National Museums Scotland.