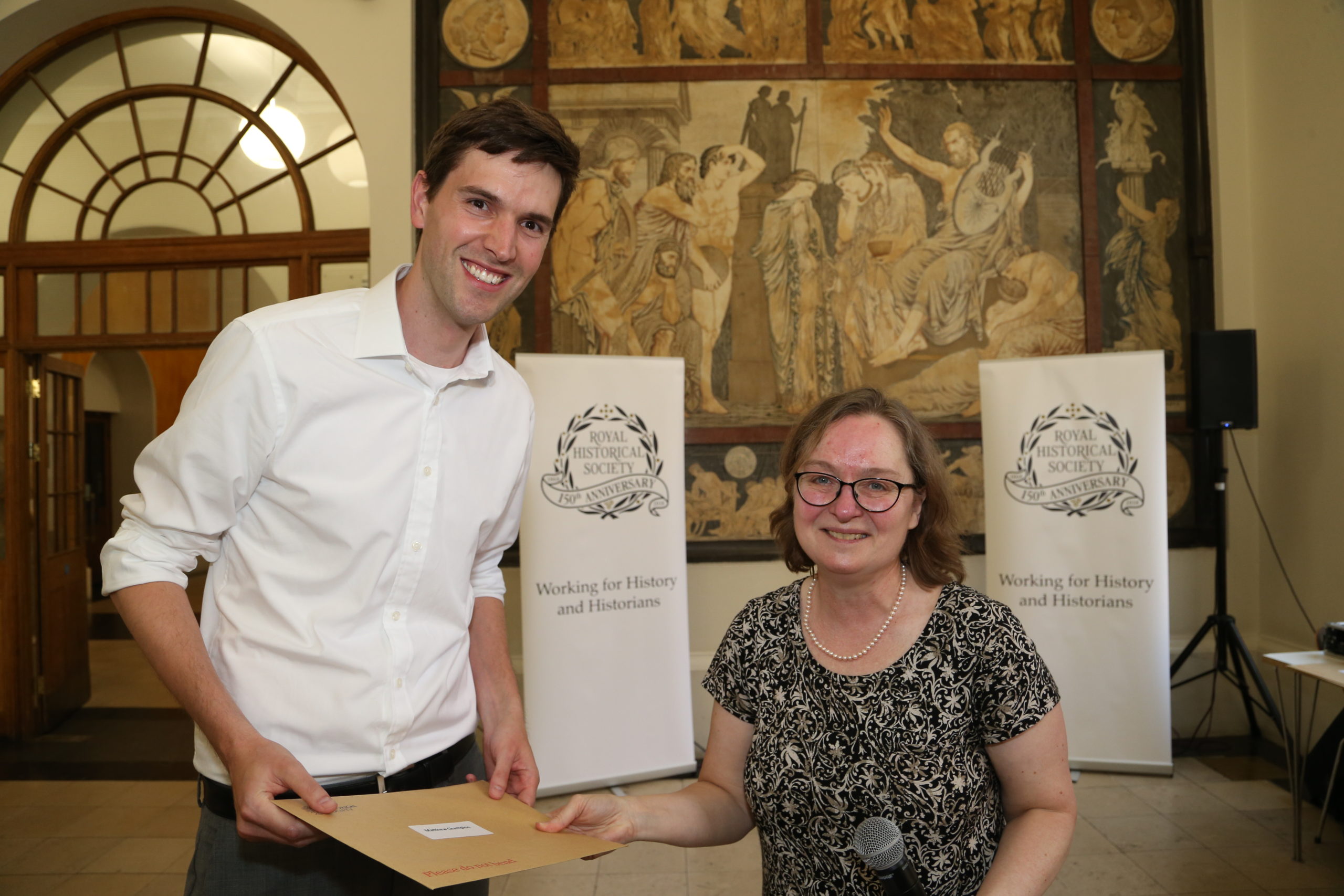 Dr Matthew Champion reflects on time and bells after hearing that he had won this year’s Gladstone Prize for his recent first book.

When I first heard that my book, The Fullness of Time: Temporalities of the Fifteenth-Century Low Countries, had won the Royal Historical Society’s Gladstone Prize, the first thing that came to mind was Gladstone St, Moonee Ponds, a street tucked behind the main shopping drag of my home suburb in Melbourne. I know I should have been thinking about the PM, but on actually receiving the prize, my mind kept turning even more stubbornly to this street, doubtless named after the Grand Old Man, but a million miles away from London.

Gladstone St isn’t really a beautiful place – if it ever was, that was destroyed when a massive new branch of the Australian Tax Office was built there in the 1990s (Gladstone PM might have been interested in that). From my family home a few blocks away, the new building changed the horizon to the west – you didn’t notice it much except at certain times – its hulk hunched over the sun in the west. 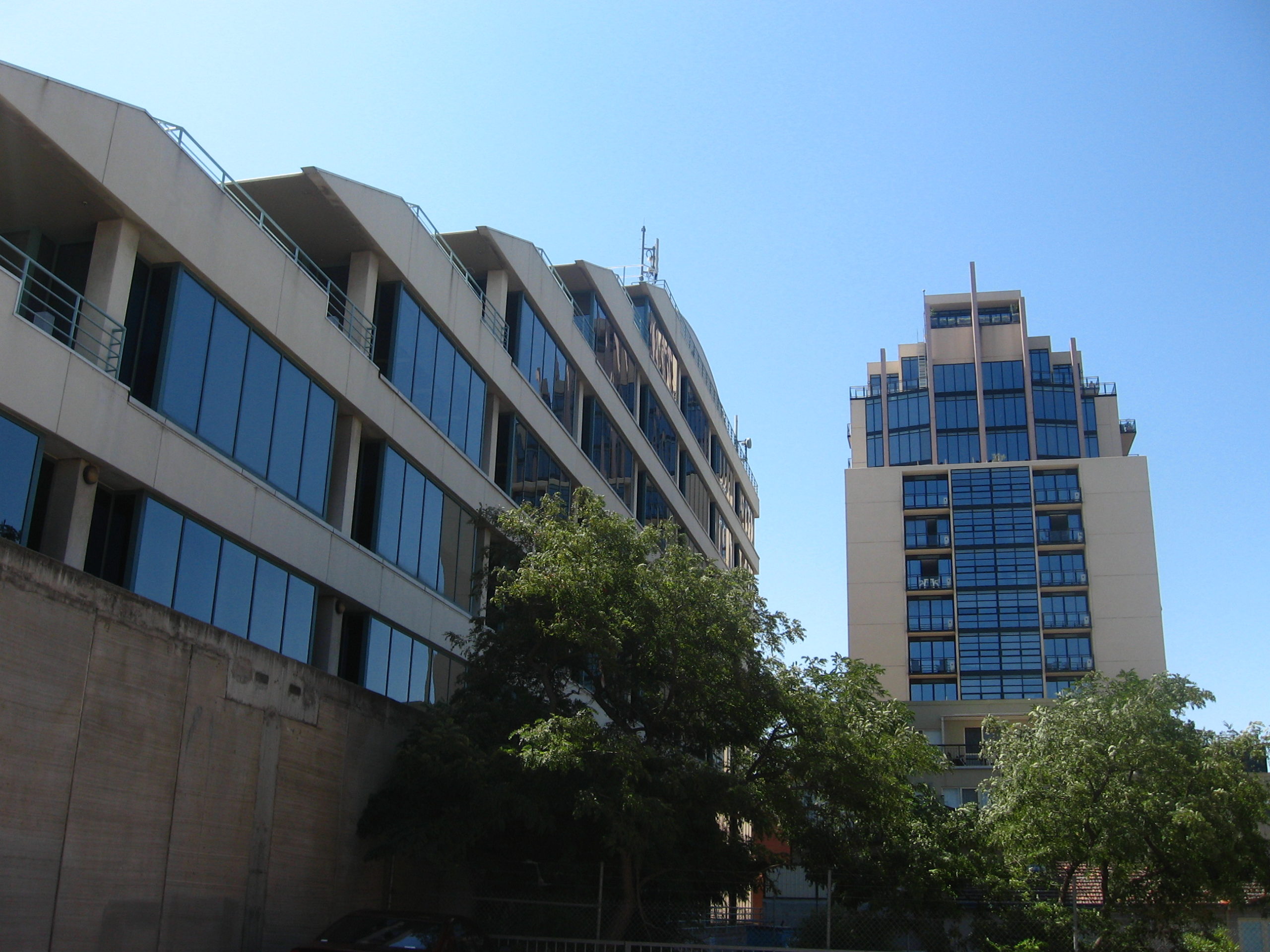 At our house, every Sunday morning, the sound of the bells of the Greek Orthodox Church of St Dimitrios, opposite the Tax Office on Gladstone St, would reach us as we played in the garden. I’d take a rake, or old cricket bat, and hit the pole of the washing line to copy the changing patterns. It probably annoyed the hell out of our neighbours. When I go back to visit my parents, sometimes I hear those bells, and am taken to the feeling of a bright Sunday morning in a crisp Melbourne March.

I’m pretty sure that I didn’t end up writing a section of my book on the marking of time through bell-ringing in the fifteenth century as a direct result of hitting a washing line as a six-year-old. But there are few direct results of anything if we pay attention to time: our experiences loop back over each other; at particular times, moments from the past seem closer or more distant. Perhaps without those Gladstone St bells, I wouldn’t have been as interested in sounds when it came to writing my PhD at Queen Mary in London. Certainly, much of The Fullness of Time could be read as me whacking the rusty washing-line of the sources with a dented old cricket bat in an attempt to summon into being the times and sounds of the past.

Take, for example, the bells of the Premonstratensian Abbey of Park. This is a large monastery just outside the university city of Louvain, modern Belgium. It is the place where Erasmus would ‘discover’ a copy of Lorenzo Valla’s Annotationes on the New Testament, with radical results for the history of scholarship. There, in 1479, the reform-minded Abbot, Thierry van Thulden, installed a new clock. We know the clock played a melody – the Marian chant Inviolata et casta es Maria (You are inviolate and chaste, Mary). The melody can be found in Premonstratensian liturgical manuscripts from the region, and is particularly fit for ringing on bells, with repeated notes and a small range.

These bells were the perfect emblem of the kinds of time I was repeatedly finding in sources from across the region. They used the most up-to-date technology, often seen by earlier scholars as introducing a rupture in the fabric of sacred time, to sacralize time more precisely – to deploy precise measurement of time to tie time more precisely to eternity. By marking each hour with a chant which made present the past moment of Christ’s incarnation in Mary’s womb, the present moment of the bells’ sounds (and the evocation of the prayer-chant), and the future protection of the Virgin Mary over the monastery, time was filled out with sacred resonance. This was one of the kinds of fullnesses that I sought to think about in my book.

The other kind of fullness was a kind of historical practice which did not shut down conversations across different media, different disciplines, and different fields of historical analyses: a full history. Understanding the clock at Park, for example, requires the history of an object, an institution, of rituals and liturgy, of individuals like the Abbot, and of a melody. The melody ended up being connected to the political history of the Dukes of Burgundy and their particular deployment of Marian piety to forge their new territorial unit – the Burgundian Low Countries, a mishmash of territories with competing social and political structures, where symbol and ritual played a central role in communication between lords, cities and subjects.

The clock’s history is also a history of images and built environments. Its bells were installed in a new tower in the monastery church. A couple images of the old monastery survive in the works of seventeenth-century antiquarians. 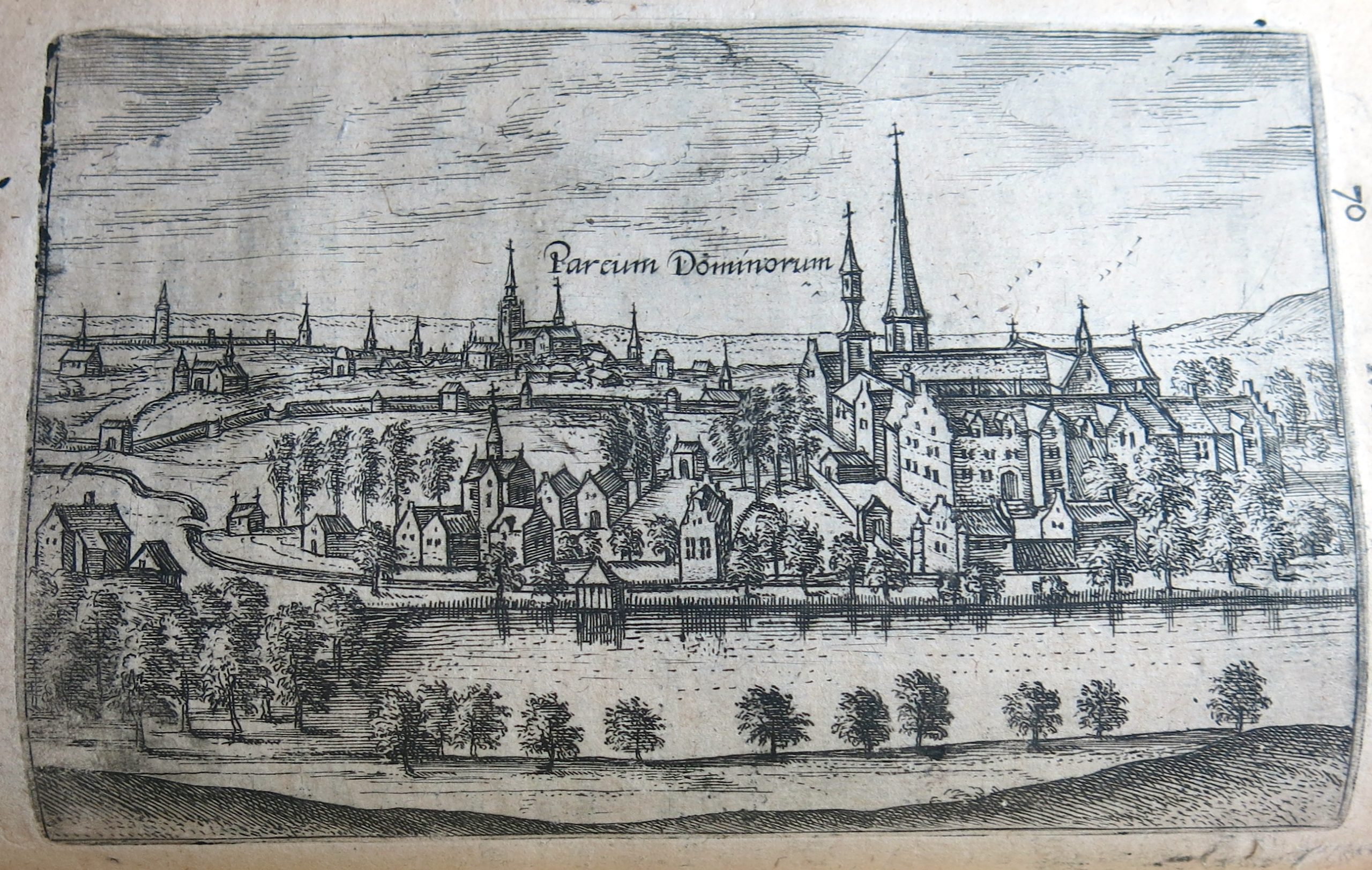 The Abbey of Park, from J.B. Gramaye, ‘Antiquitates illustratissimi ducatus Brabantiae’ (Brussels, 1610). Reproduced by permission of the Master and Fellows of Sidney Sussex College, Cambridge.

The monastery itself, which you see in this image, was largely rebuilt or destroyed in later centuries, though its setting beside its medieval fishponds is a reminder of the ways in which the marking of time through feast and fast radically reshaped Europe’s environments. 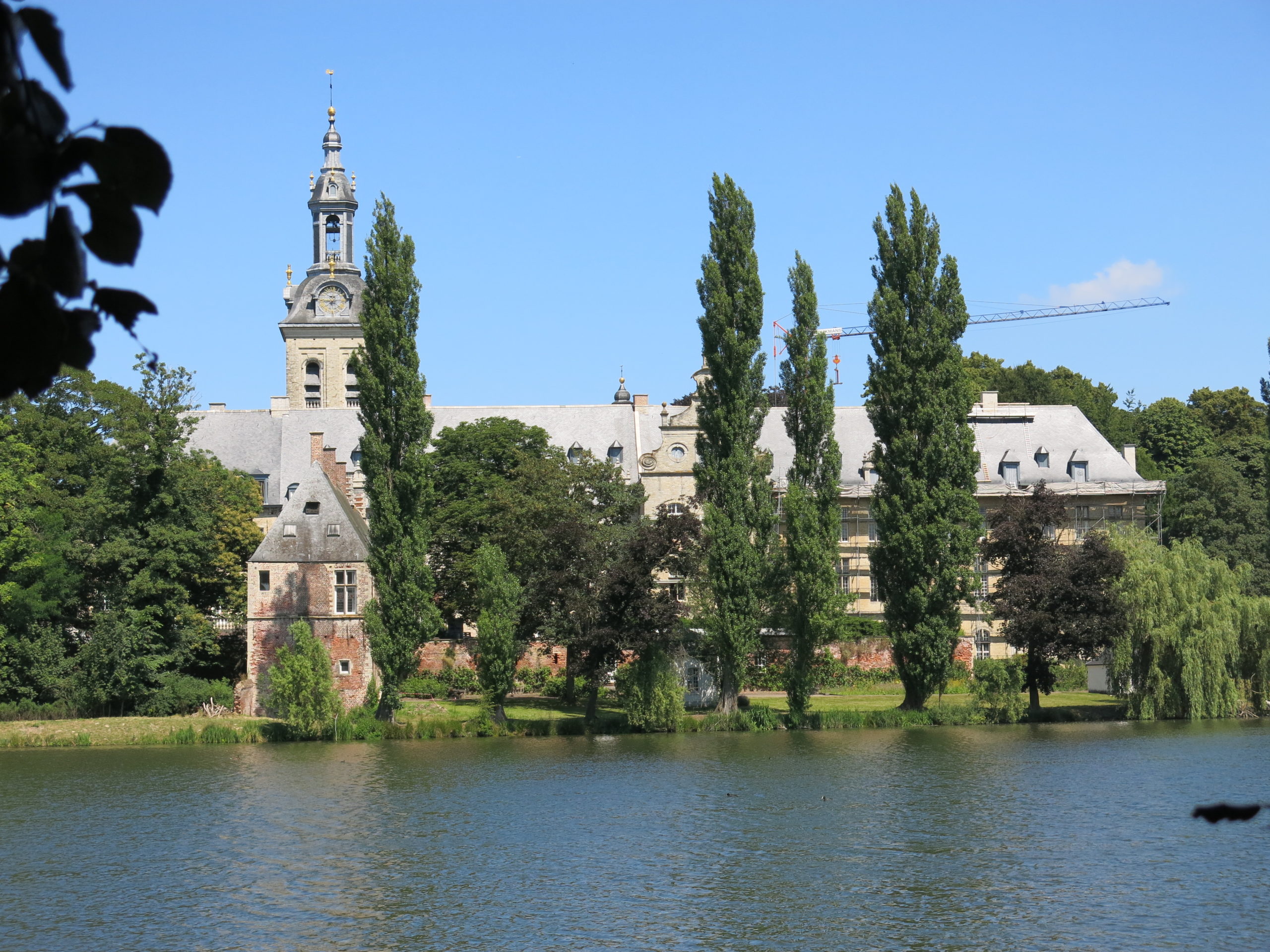 The Premonstratensian Abbey of Park. Photographed by author (2013)

The tower which is the most likely candidate for the bells is the little one beside the m of Dominorum in the 1610 image. Joanne Anderson at the Warburg kindly pointed out to me it is also a visual structure similar to the kinds of elaborate architectural ‘houses’ for the Eucharist which were being installed in churches across the Low Countries in the period. So here, again, we might see a resonant body of sources pointing towards the co-habitation of the eternal in the precisely temporal.

This is a long way from Gladstone St – but the possibilities of this kind of history help me understand it in new ways: I don’t have to see St Dimitrios’ church as a dying remnant of a kind of sacred time antithetical to the measurement of the modern secular hours. Instead, the time of that little church might be seen as part of a world full of varieties of sacred and secular time: a time for prayer, a time for play; a season for tax returns, a season for cricket, and a season for hanging clothes on the line outside (less of that in Britain, but even that climatic distinction is, of course, subject to change). And I can see a history of the architectures of time, and architecture in time, as another complement to a fuller transdisciplinary practice of history.

Dr Matthew Champion is Lecturer in Medieval History at Birkbeck, University of London.