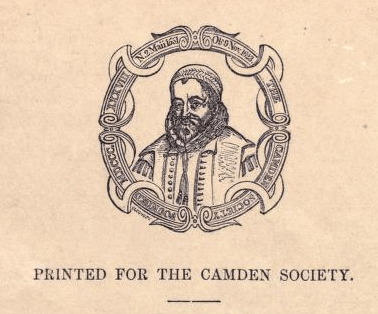 To mark the 150th anniversary of the Royal Historical Society, Cambridge University Press are making a selection of ten volumes from the Camden Series freely available to researchers until the end of the year. The Camden Series is the cornerstone of the RHS publications, with two volumes published each year, making over 325 volumes to date. It is a collection of scholarly editions of primary sources and important but previously unpublished texts on British history, each accompanied by an expert commentary. The volumes provide an invaluable resource for historians and other scholars, as well as providing a significant bank of primary material for students, especially for dissertation work.

The series was started in 1838 by the Camden Society, which was founded ‘for the publication of early historical and literary remains’. The Society had published over 160 volumes before it merged with the RHS in the late nineteenth century. The first volumes ‘following the amalgamation’ of the Camden Society with the RHS appeared in 1897. They were the third volume of The Nicholas Papers edited by George F. Warner – the correspondence of Sir Edward Nicholas, secretary of state to Charles I and Charles II – and the second volume of Thomas Graves Law’s The Archpriest Controversy relating to Catholic missionary priests in late Elizabethan England. Ian Archer, a former RHS Literary Director, discusses the history and range of the Camden series in an article on the Society’s publications in the forthcoming issue of Transactions of the Royal Historical Society.

Under the auspices of the RHS, the chronological coverage of the Camden Series expanded beyond the initial focus on the medieval and early modern period to embrace, initially, the eighteenth and nineteenth centuries. The early twentieth century saw the publication of the correspondence of the ambassador to Catherine the Great (1900, 1902); despatches from Paris on the eve of the French Revolution (1909, 1910); Foreign Office records on a coalition against Napoleon (1904). These diplomatic volumes appeared alongside the more traditional Camden fare such as State Trials of the reign of Edward the First, 1289–1293 (1906) and The Diary of the Rev. Ralph Josselin, 1616–1683 (1908). From the 1980s, the series has included volumes on twentieth-century British history, such as diaries and papers relating to the politicians Austen Chamberlain (1995) and Cuthbert Headlam (1999) as well as the journalists Collin Brooks (1998) and A.L. Kennedy (2000).

Although the focus for the Camden Series is ‘British History’, there is some elasticity in how the term is applied, so that the series embraces ‘Britons’ or ‘British’ interests outside the archipelago. Besides volumes on foreign policy, the series has also included topics as diverse as Documents Illustrating the British Conquest of Manilla, 1762–1763 (1971) and a decade later English Suits before the Parlement of Paris, 1420–1436 (1982). More recently British diplomatic interests in Bismarck’s Germany were the focus in British Envoys to the Kaiserreich 1871–1897 published in 2017 and a second volume is scheduled for 2019.

In the Camden’s Fifth Series, published since 1993, the range of primary sources has continued to expand, embracing economic, political, religious and social history from across the chronological spectrum together with more ‘traditional’ areas. The latter includes volumes such as the examination of the late medieval charters of a religious house on the outskirts of modern Sheffield – A Monastic Community in Local Society: The Beauchief Cartulary (2011) – and the reflections of a Puritan London merchant on political affairs at the end of the English Civil War in The Journal of Thomas Juxon, 1644–1647 (1999). A different perspective on late nineteenth-century British politics is provided by a crown official and Irish nationalist in Dublin Castle and the First Home Rule Crisis: The Political Journal of Sir George Fottrell, 1884–1887 (2008). The RHS has published a number of Miscellany volumes that include a range of shorter archival sources. In Travel, Trade and Power in the Atlantic, 1765–1884 (2002), the first part looks at the correspondence regarding the management of the Jamaican estates of a British MP in the late eighteenth century, while the second section covers three voyages made in the early 1880s to West Africa, providing insights on the region’s trade with Bristol. A rather different view of British interests overseas are the confidential reports and correspondence of Bernard Pawley, the archbishop of Canterbury’s observer to the second Vatican Council between 1961–64, published in 2003.

The series has started to become more representative of the discipline and society. Recent volumes on women’s history include The Remembrances of Elizabeth Freke, 1671–1714 (2001), with its rich insights into her self-fashioning and experiences through three decades of marriage and widowhood. The extensive correspondence in The Letters of Lady Anne Bacon (2014) sheds fresh light on the activities of educated elite women in the late sixteenth century. An Account of an Elizabethan Family: the Willoughbys of Wollaton by Cassandra Willoughby, 1670–1735, which will be published later this year, explores the strained relationships within a prominent gentry family. Compiled by a descendant in the early eighteenth century from now lost family letters and papers, it provides a unique perspective on the attitudes and expectations surrounding marriage and the status of women in Elizabethan England. Also indicative of this more inclusive approach is the publication of The Making of the East London Mosque, 1910–1951 (2011), a century after the call to build a mosque ‘worthy of the capital of the British Empire’. Although it took many years for the project to reach fruition, the volume charts ‘how the newly emerging confident Muslim community of the early twentieth century and major figures of the British establishment reached out to one another, each looking to nurture the development of this new multicultural society’.

The Camden Series has become more accessible than ever before through the digitisation of the volumes by Cambridge University Press. These electronic volumes are available to historians, researchers and students (ideal for those working on dissertations!) through the Cambridge Core platform but they can also be accessed directly through some university library catalogues, particularly useful for institutions without a complete set of Camdens. The electronic database is fully searchable meaning that names and key words can be quickly looked for across more than 325 Camden volumes.

As the History panel report from the 2014 REF indicated, scholarly editions remain an important part of the academic landscape. In this environment, the RHS remains committed to publishing peer reviewed and high quality edited texts of primary sources on all aspects of ‘British’ history.