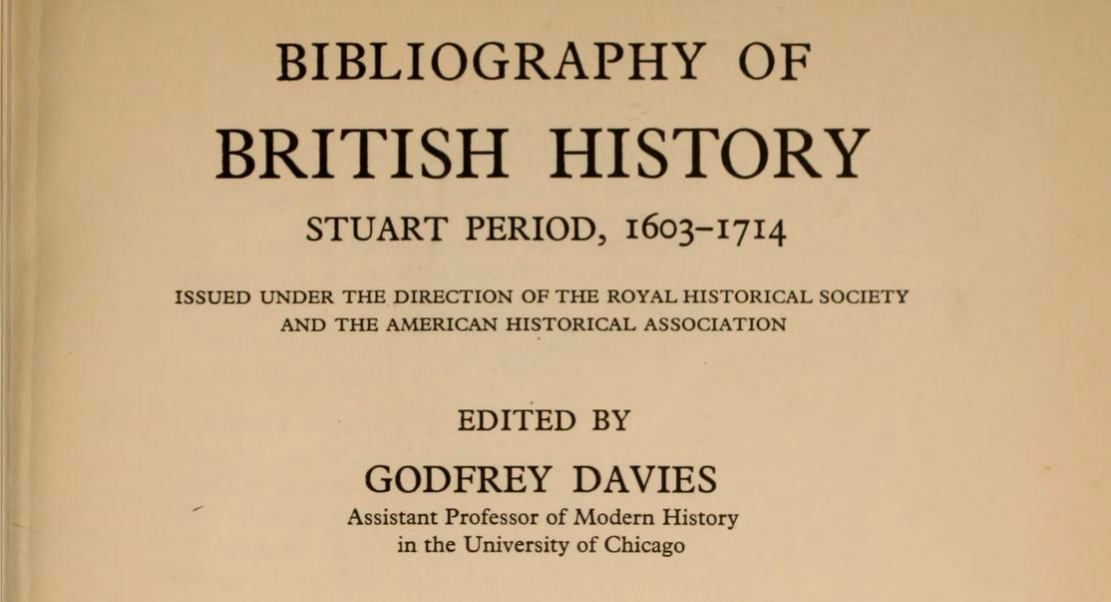 The RHS & the Bibliography of British & Irish History

Prof. Leslie Howsam explores the Royal Historical Society’s role in the development of history publishing, and examines the history of our Bibliography of British & Irish History.

History was not always a field of study based on rigorous research in documentary sources; nor has it been located since time immemorial in academic settings. Before about the mid-19th century, it was a literary genre based on reproducing a traditional narrative with authorial panache and it was located primarily in the offices of commercial publishers. That’s an oversimplification, of course: my book and an article on the subject make the argument in a more nuanced (and documented) way, but the gist is that the decades that closed the nineteenth and opened the twentieth century were years of struggle over how historical works were to be published and subsidized. The research paradigm shifted during those years, and scholars largely abandoned the popular demand for narrative to journalists. Central to the transition were projects for a new kind of periodical and an up-to-date bibliography, both dedicated to historical scholarship.

Founded 150 years ago in 1868, the Royal Historical Society was a part of this transition. The RHS got off to a somewhat rocky start in the 1860s, but by the 1890s the idea of a London-based organization holding meetings where papers were read, publishing ‘transactions’, networking with historians abroad, and otherwise taking a leadership role soon attracted strong leaders and a membership eager to participate. From the beginning, the core mission of the Society – the source of its income and the object of most of its expenditures – was its publication programme.

Publishing has its own history, and over the past thirty years or so, the history of the book has flourished in the hands of such distinguished practitioners Ann Blair, Anthony Grafton, and James Secord. Book historians have demolished the myth of the solitary genius in literary authorship; they have challenged the history of science to discover how readers managed and interpreted the knowledge at their disposal. Bibliographers have theorized their discipline’s practices of enumeration, description, and analysis of books as material objects and brought their work into conversation with historians and literary scholars. Now it is history’s turn for the spotlight: scholars are delving into the papers of both historians and their publishers and finding that that the latter had more agency in shaping historiographical discourse than they have hitherto been allowed. Furthermore, the materiality of history books yields rich insights about how they were edited, deployed in realms from pedagogy to politics, revised, and sometimes rendered obsolete.

Embedded in the RHS’s own archives is the story of how the organization initially contemplated its role as a publisher. From the beginning, the founders imagined the publication of Transactions and very soon also identified the need for a Bibliography of British History (now the Bibliography of British and Irish History). Before long, I hope, some historian will work systematically through the Minutes of the Publication committee and surviving personal papers of the relevant people, to trace and analyse that history. Like other publishers of scholarly journals, RHS leaders wrestled with editorial policy, peer review, subscriptions and complimentary copies. But as historians, they were particularly interested in creating and publishing a bibliography. They set out about 1909 to collaborate with the American Historical Association on the project and identified an already-outdated book by a Harvard medievalist as their starting point; this was Charles Gross, (ed.), The Sources and Literature of English History from earliest times to about 1845. The first edition had been published (by Longman) in 1900.

The project was ill-timed, given that it had just got underway when it had to be suspended during the First World War. But it missed its chance in another way, too. Practitioners of the disciplines of bibliography and historiography (now working together in book history) might have initiated a rich interdisciplinary relationship, at a moment when both were consumed by transition and transformation. Around the same time as George Walter Prothero and his colleagues were struggling to work out how to organize their Bibliography of British History, other London scholars at the British Museum Library and in the Bibliographical Society, were wrestling over the correct way to reveal the knowledge inherent in material books. They were keen to distinguish the various aspects of bibliography, with enumeration as the listing of books and description as the prelude to analysis and the basis of textual scholarship. These bookish scholars cared most about the literary canon and how early modern printers had given it material form.

What the RHS and AHA historians were doing was enumerative bibliography; they cared about content and subject matter, not authorship or textual authority. Based on my preliminary look at the sources, they don’t seem to have realized the enormity of what they were undertaking. From their point of view, it must have seemed well within their competence as historians and a service to their peers. What could be more straightforward than listing (but in what order?) and (perhaps) annotating the books (but surely not the textbooks or popular works) on key geographical and temporal subjects relating to Britain’s past? More questions arose: was it necessary to record the existence of reprints or revised editions? Perhaps some of the better articles should be included? Both the minute books and the prefaces to various early editions of the RHS Bibliography show that these matters required a whole series of delicate judgements based on unsupported assumptions. It is in the realm of the ‘but’ and the ‘perhaps’ that historians’ colleagues in the library might have helped. The bibliographers focused on books as material objects with a fine disdain for the texts therein. The historians were overwhelmingly concerned with the latest scholarship to the exclusion of the vehicles that carried it.

Looking back with the hindsight of 2018, the historian of books sees a missed opportunity on both sides. Bibliographers might have helped historians to learn that books are mutable: their texts can change dramatically while their titles stay the same. And historians might have taught bibliographers that the evidentiary value of texts and objects is rooted in their cultural context, inseparable from agency and power.

Professor Leslie Howsam is Distinguished University Professor Emerita at the University of Windsor (Canada). She was President of the Society for the History of Authorship, Reading & Publishing, and her many publications include the Cambridge Companion to the History of the Book (2015). Her current research project explores the history of history publishing. You can follow her on Twitter @lesliehowsam.