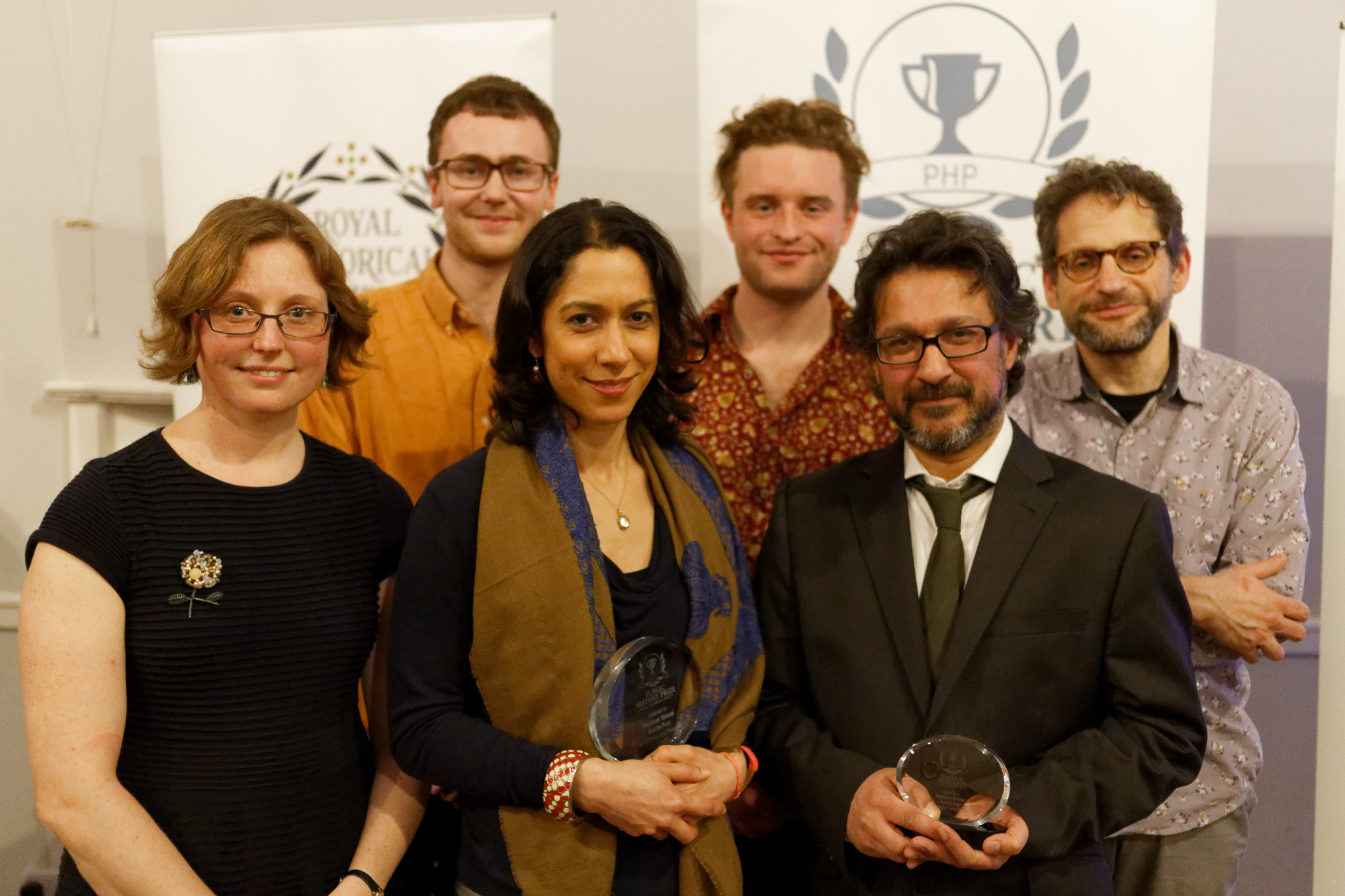 In January at the Mary Ward Centre in London, we presented the awards for the 2018 Public History Prize. There were wonderful entries in all categories, displaying the diversity and creativity of historians across the country engaging with public audiences. Ahead of our Public History Symposium this week in Birmingham, you can read about some of the amazing projects that won awards and received commendations. 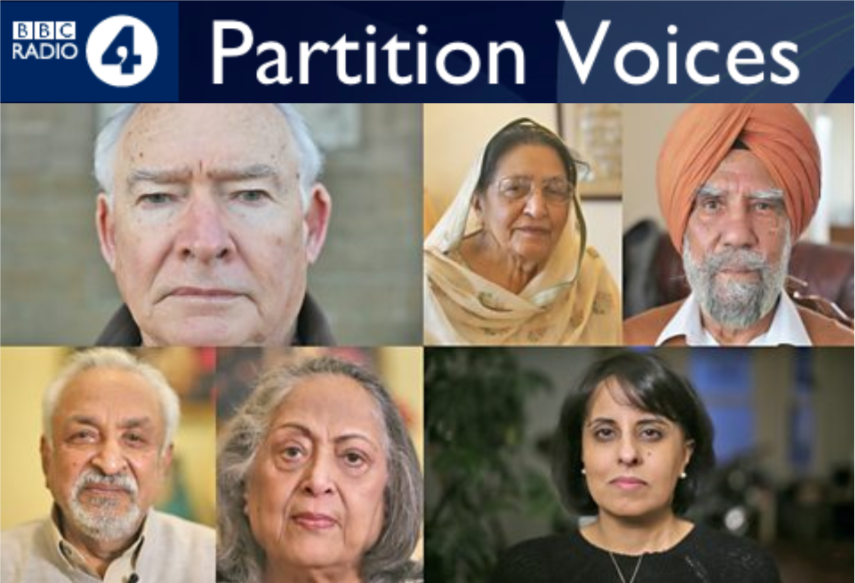 ‘Partition Voices was a landmark Radio 4 series marking the 70th anniversary of the Partition of British India into the dominions of India and Pakistan. It featured the remarkable first-hand testimonies of British Asians and Colonial British across the UK, who lived through one of the most tumultuous events of the twentieth century. Up to 12 million people were on the move as Hindus and Sikhs fled to India, Muslims to Pakistan. Around a million people are estimated to have been killed, tens of thousands of women raped and abducted. Many who lived through this period kept their silence for 70 years, such was their trauma. Yet those taking part in the series speak with great clarity on the years leading up to Partition; the months around Partition; and how the legacy endures within Britain’s South Asian communities today. The British Library’s Sound Archive is preserving all the interviews, and you can listen to the full series via BBC iPlayer.’

The judges selected Museum of London Docklands’ exhibition ‘Tunnel: The Archaeology of Crossrail’ as the winner of the Museums & Exhibitions prize. The judges commended how Tunnel covers ‘great stretches of time and brings together engineering, archaeology and history’, as well as demonstrating ‘how large infrastructure projects can make an impact on the public understanding of the past, and appeal to all ages’ with over 500 artefacts showing the history of the new Elizabeth Line over the past 100,000 years. Nearly 100,000 people visited Tunnel during its six-month  run. 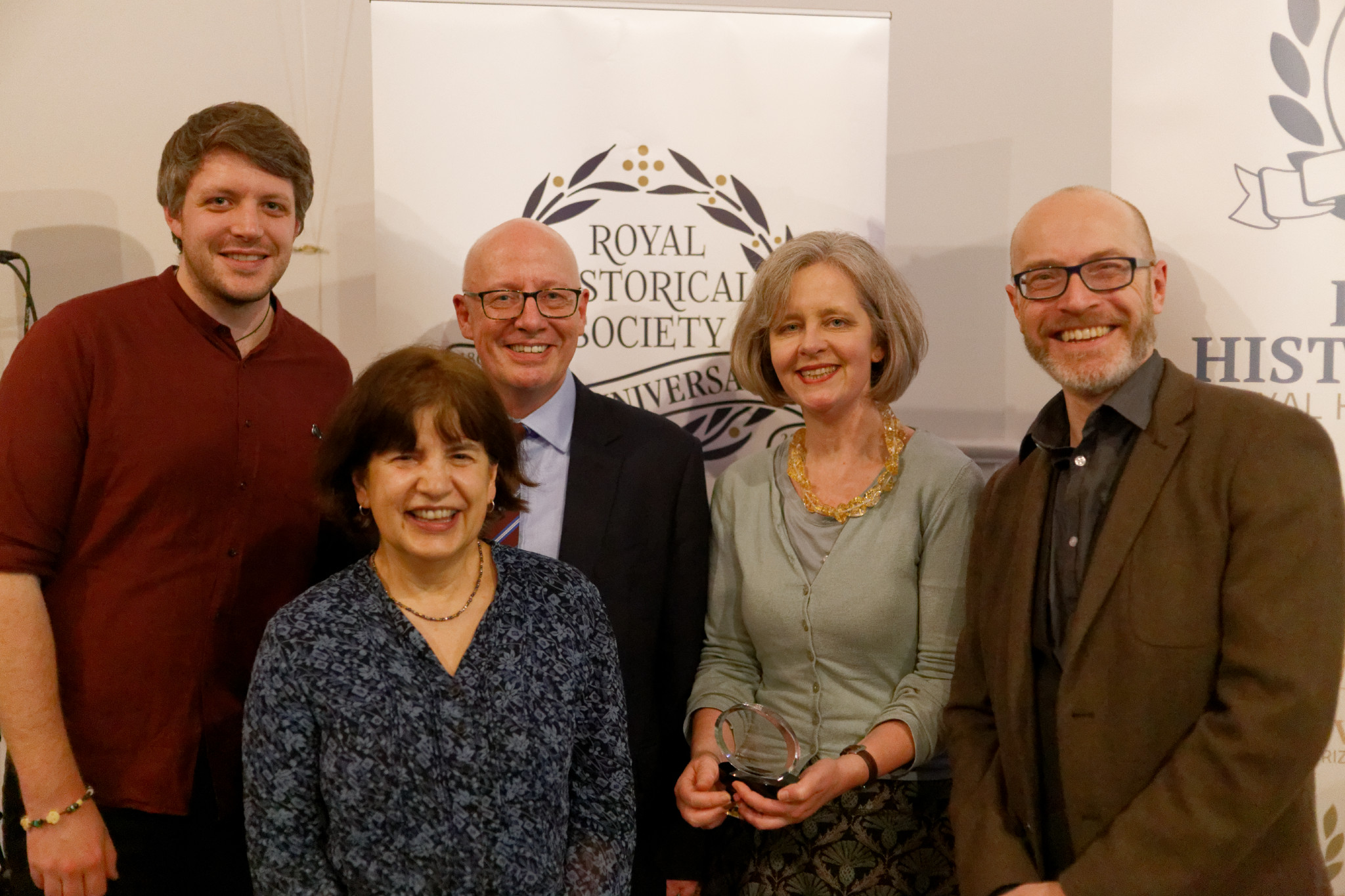 The team thanked their partners Crossrail, and the commercial archaeological units, MOLA and Oxford Archaeology, for their work in excavation and research. Senior Curator Jackie Keily (second from right) accepted the award along with her colleagues (left to right) Richard Ward (MOLA), Helen Ganiaris, Richard Sweet (both Museum of London), and Andrew Briffett (Crossrail).

The winner of the Film & TV prize was BBC2’s landmark series, ‘Black & British: A Forgotten History’, presented by David Olusoga. The judges commended how the series ‘combined a sensitivity to local, site-specific locations with an understanding of the significance of major historical shifts, such as the relationships between Britain, Africa and the Caribbean, showing how British history is also global history’. David Olusoga accepted the award along with Paul Reid, Director of the Black Cultural Archives in Brixton. 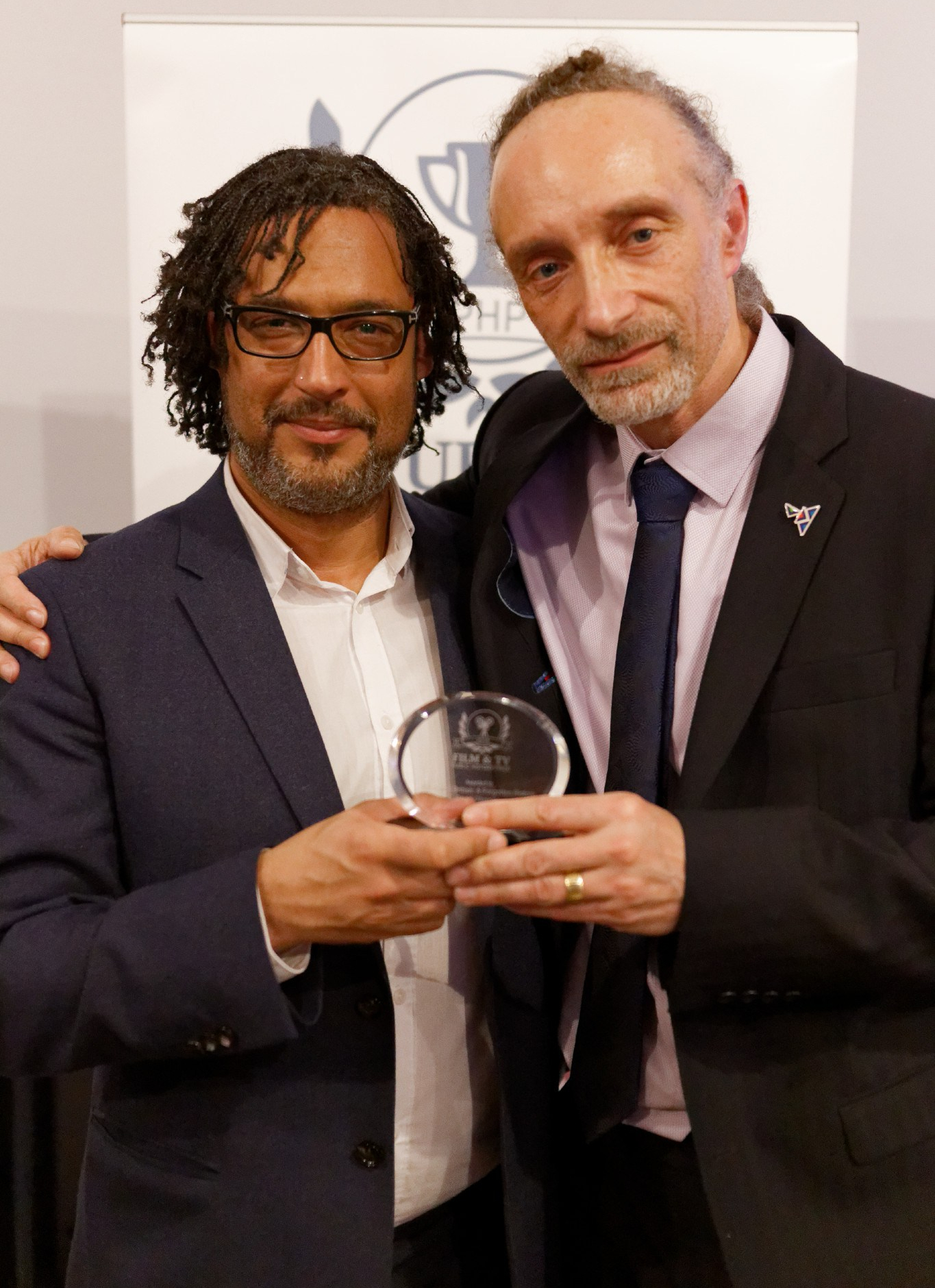 The series addressed the ‘whitewashing of black British history’, raising awareness and sparking debate about the long history of black Britons and Britain’s relationship with race. The series was also accompanied by Olusoga’s critically-acclaimed book, winner of the 2017 PEN Hessell-Titman Prize, and Olusoga was also recently awarded the Trustees’ Prize at the recent Longman/History Today Awards for his work on the series. Olusoga has joined our new Race, Ethnicity & Equality working group, which is exploring the challenges facing black, Asian, and other minority historians in the UK.

The prize for Online Resources went to ‘Our Migration Story’, a collaborative project of the Runnymede Trust, the AHRC, and the Universities of Cambridge and Manchester. The project team describe their work and achievement below: 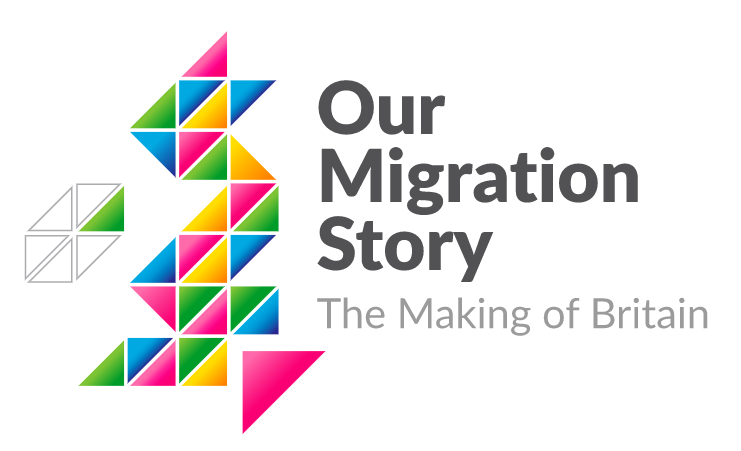 ‘Our Migration Story represents the culmination of a decade of innovative interdisciplinary collaboration between Claire Alexander (Manchester), Joya Chatterji (Cambridge) and The Runnymede Trust. These projects have taken original historical research into schools to inspire young people and teachers to engage with family and community history as a way of understanding the historical ‘roots’ and ‘routes’ of contemporary multicultural Britain. Since 2016, the team has partnered with over 70 historians, national and local museums and archives, schools and educationalists to create a ‘joined-up’ resource for teachers and pupils.  OMS brings together original research and resources on Britain’s migration history presented in an accessible format for teachers, young people and the public. The site functions as an online textbook written by academic experts and as a knowledge hub through which further resources can be discovered. OMS represents a unique collaboration of academic researchers with civil society institutions, policyshapers, NGOs and educators in a collective endeavour to retell the story of Britain.’ 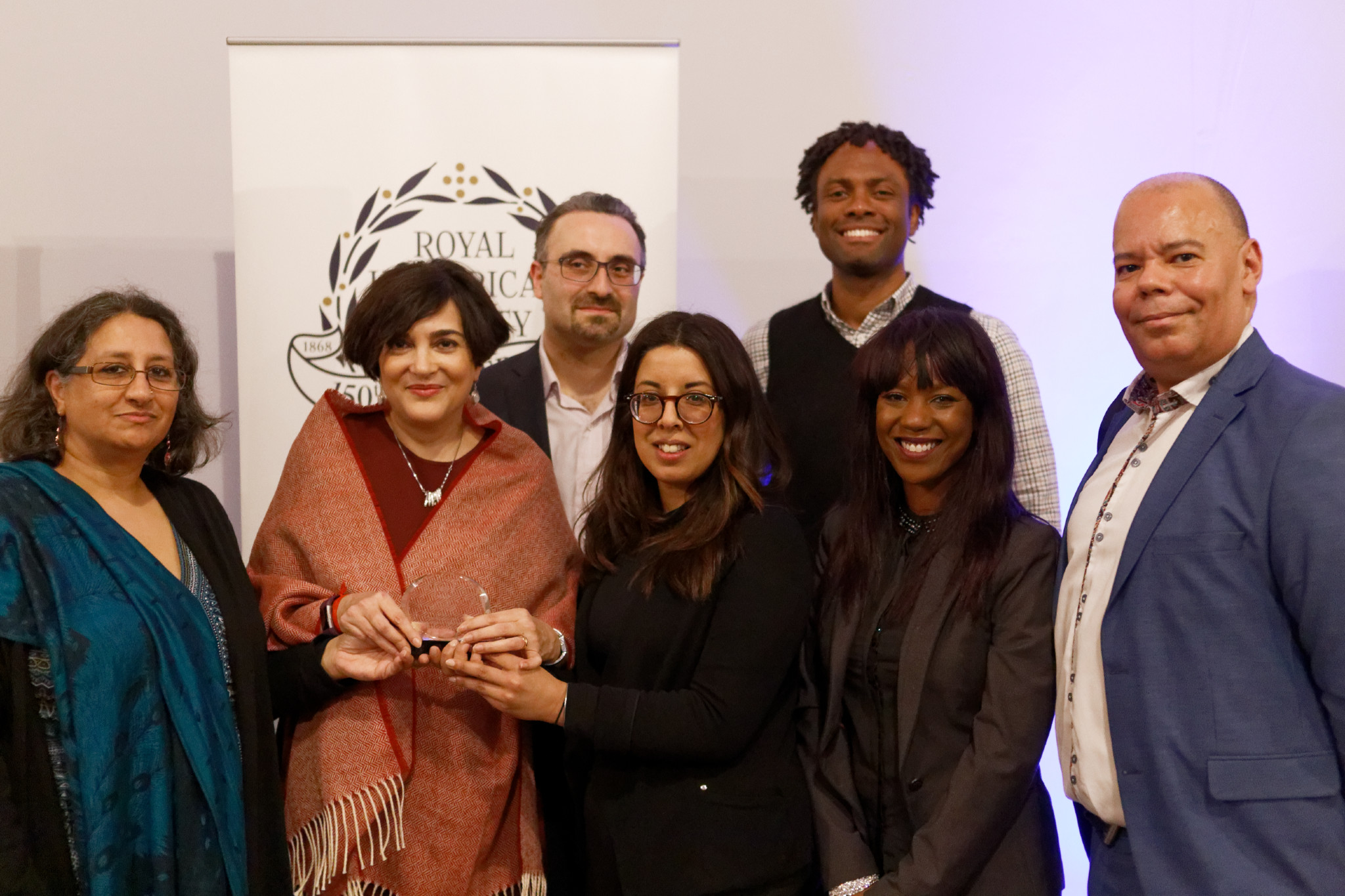 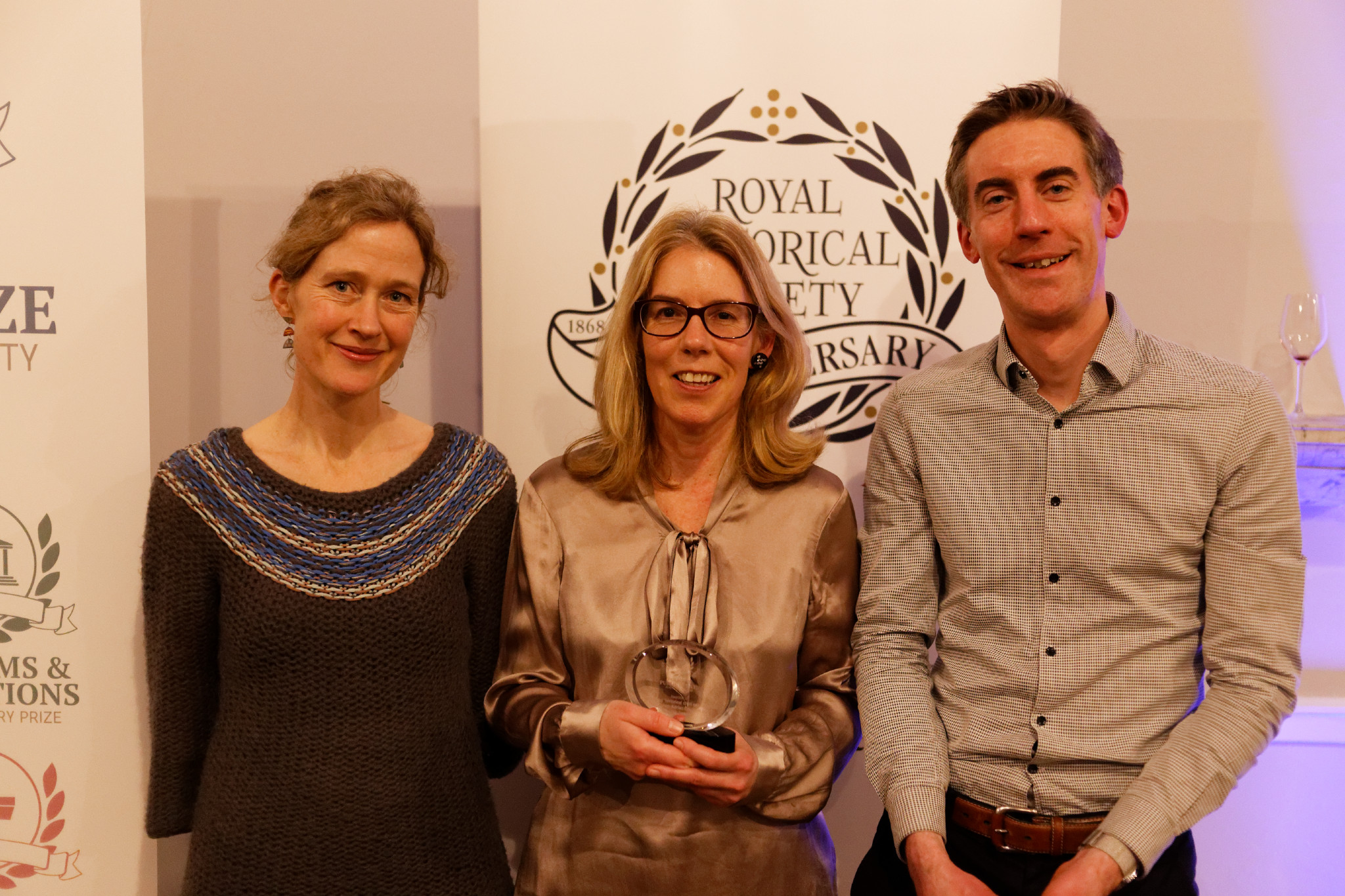 The Public Debate & Policy Prize was awarded to Lucy Delap, Louise Jackson, and Adrian Bingham (from left) for their work ‘Historicizing historical child sex abuse’, which was supported by History & Policy, and an ESRC Urgency Grant.

Through archive work and the construction of a database of press reports, the researchers have extended the scholarship on child abuse and how it has been dealt with by institutions such as the media, social work and the criminal justice system. The judges commended them for ‘tackling one of the most painful and contested issues of our time, demonstrating how historical expertise can illuminate an area of major public concern’, and ‘ensuring that the policymaking implications of this research reaches key audiences’ through broadcasting, public seminars, and direct contact with the Home Office, the Prisons service, and an Independent Inquiry.

This year’s competition saw the launch of two new Student Prizes. The Undergraduate Prize winner was Cherish Watton (Cambridge) for her ‘Democratic and Critical Commemoration of the Women’s Land Army in Twentieth-Century Britain’. Alongside her dissertation on the subject at Lucy Cavendish College, Cambridge, Watton has made her website on the Women’s Land Army and Women’s Timber Corps an online hub for the commemoration of the two organisations. The site includes information on wartime service, photos, videos, and songs, along with extensive primary source collections, ‘democratising access to materials on the First and Second World War which usually reside in physical archives’. Family historians, schools, the media, and researchers have all made use of the site, and Watton has shared through public and media events. She comments that: 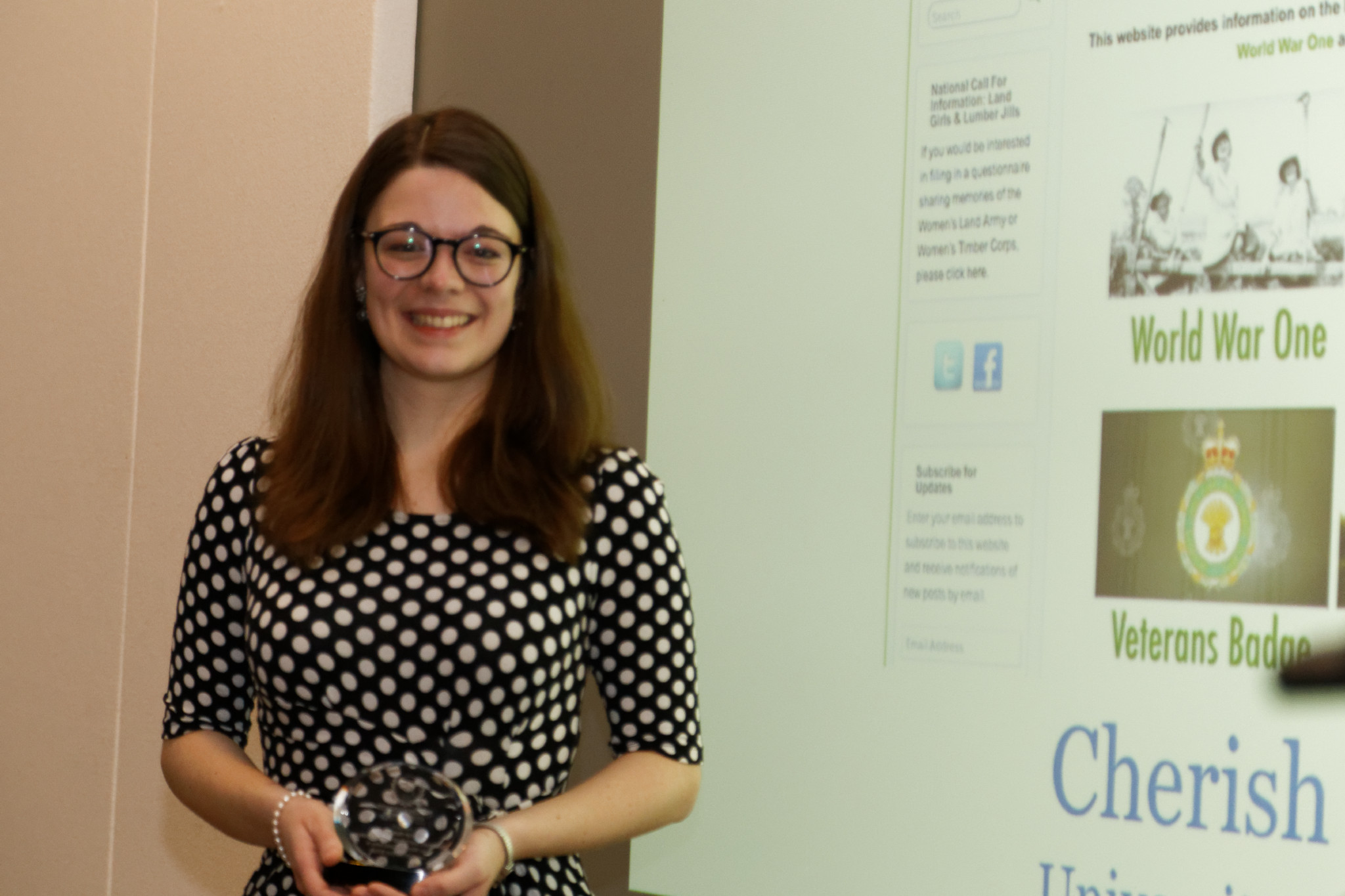 ‘Public history has, and remains, a fundamental role in my work as a historian, so to be recognised by the RHS for this work is humbling. I have felt privileged that Land Girl and Lumber Jill veterans and their families, have trusted me to share their varied wartime experiences. In being the first undergraduate winner, I hope it highlights the valuable part which undergraduates can play in offering engaging and critical histories to a range of audiences.’ 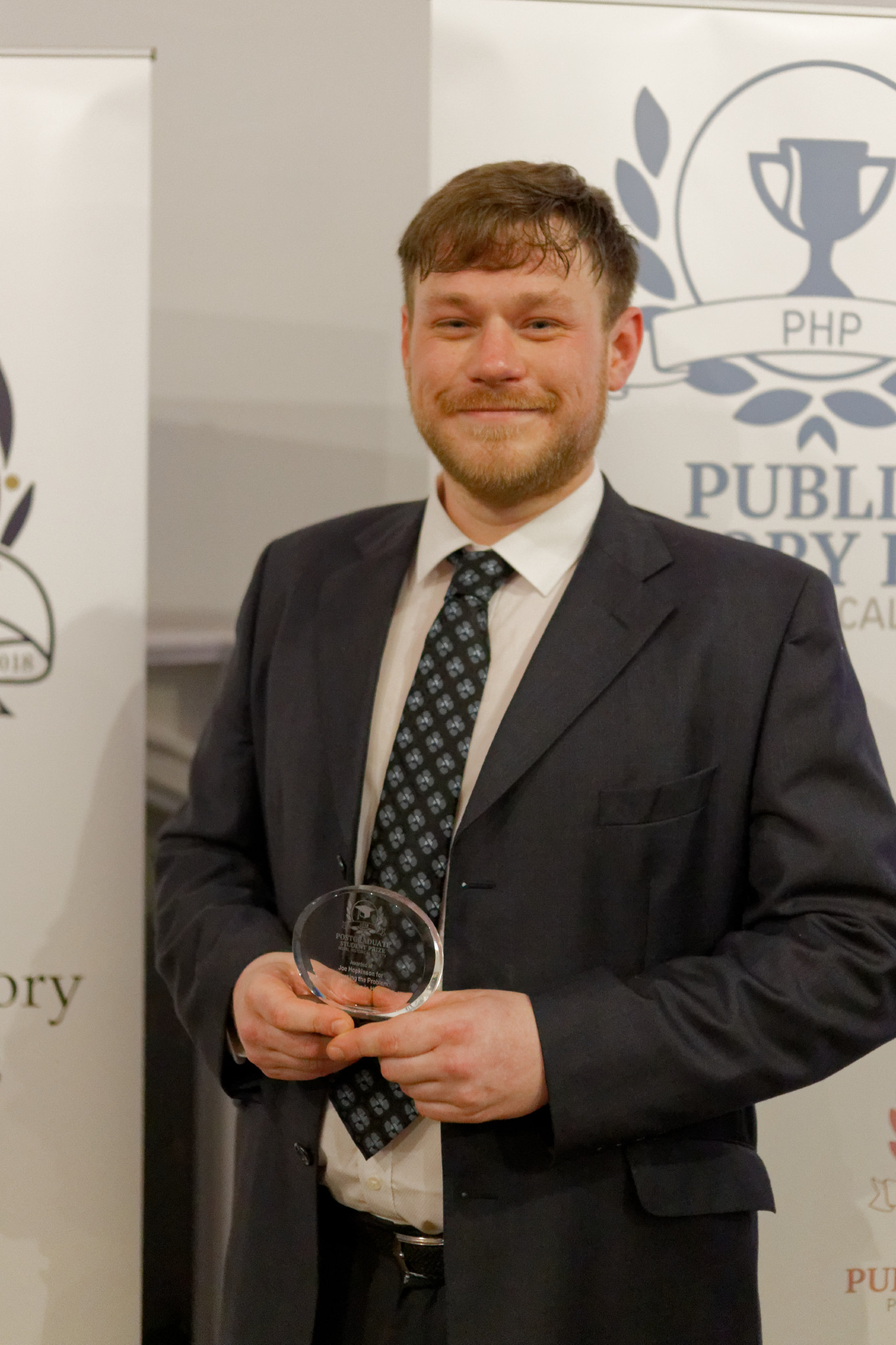 The Postgraduate Prize winner was Joe Hopkinson (Huddersfield) for his film ‘Dispersing the Problem: Immigrant Children in Huddersfield, 1965-1974’. The judges described Joe’s film as ‘an excellent example of public history at work’, and were impressed by how it dealt with the sensitive (and timely) subject of the ‘bussing’ of immigrant children in Huddersfield ‘in a sensitive and nuanced manner, encouraging viewers to consider the issue from a range of perspectives, and allowing a range of voices to be heard.’ Joe describes the subject of his film:

‘During the 1960s and 1970s the British government recommended that its Local Education Authorities utilise a policy known as dispersal school bussing. Its purpose was to spread Black and Asian children around local schools to minimise the problems that concentrations of them were seen to cause. In my film, the history of the policy in Huddersfield, West Yorkshire, is examined through the experiences of four people who were bussed in the town, and the testimonies of two elderly educators who were involved in bussing, attempting to present a balanced perspective of this controversial policy.’ 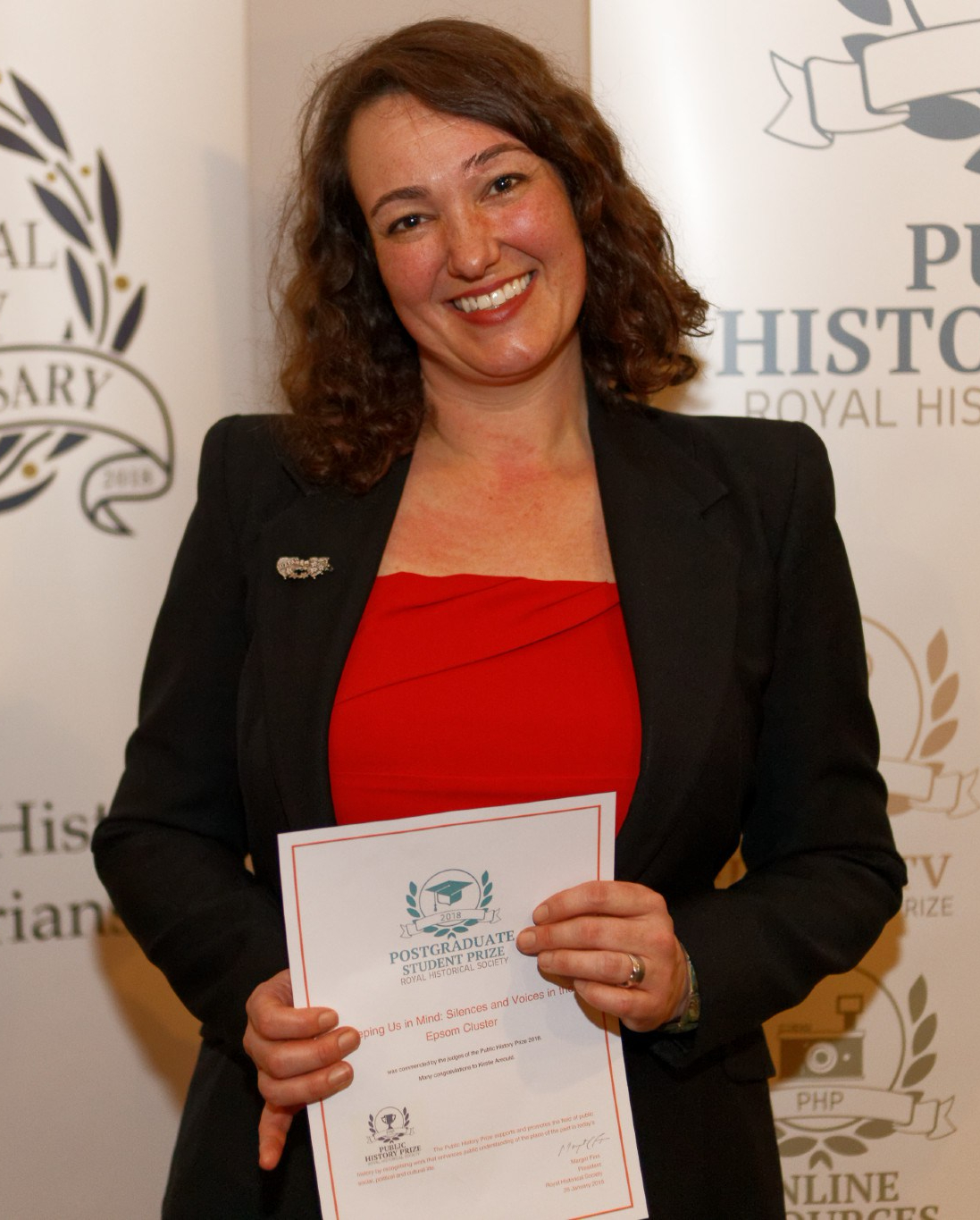 The judges also wished to commend three other nominations across the various prizes. Kirstie Arnould (Royal Holloway, University of London) was commended in the Postgraduate category for her oral history project ‘Keeping Us in Mind: Silences and Voices in the Epsom Cluster’, a partnership between mental health charity Love Me Love My Mind, Surrey History Centre, and Bourne Hall Museum. Arnould recorded the memories of over 50 people who lived and worked at five psychiatric hospitals around Epsom, both exploring staff and patient experiences and reflecting on the place of large psychiatric institutions in the history of mental health care. 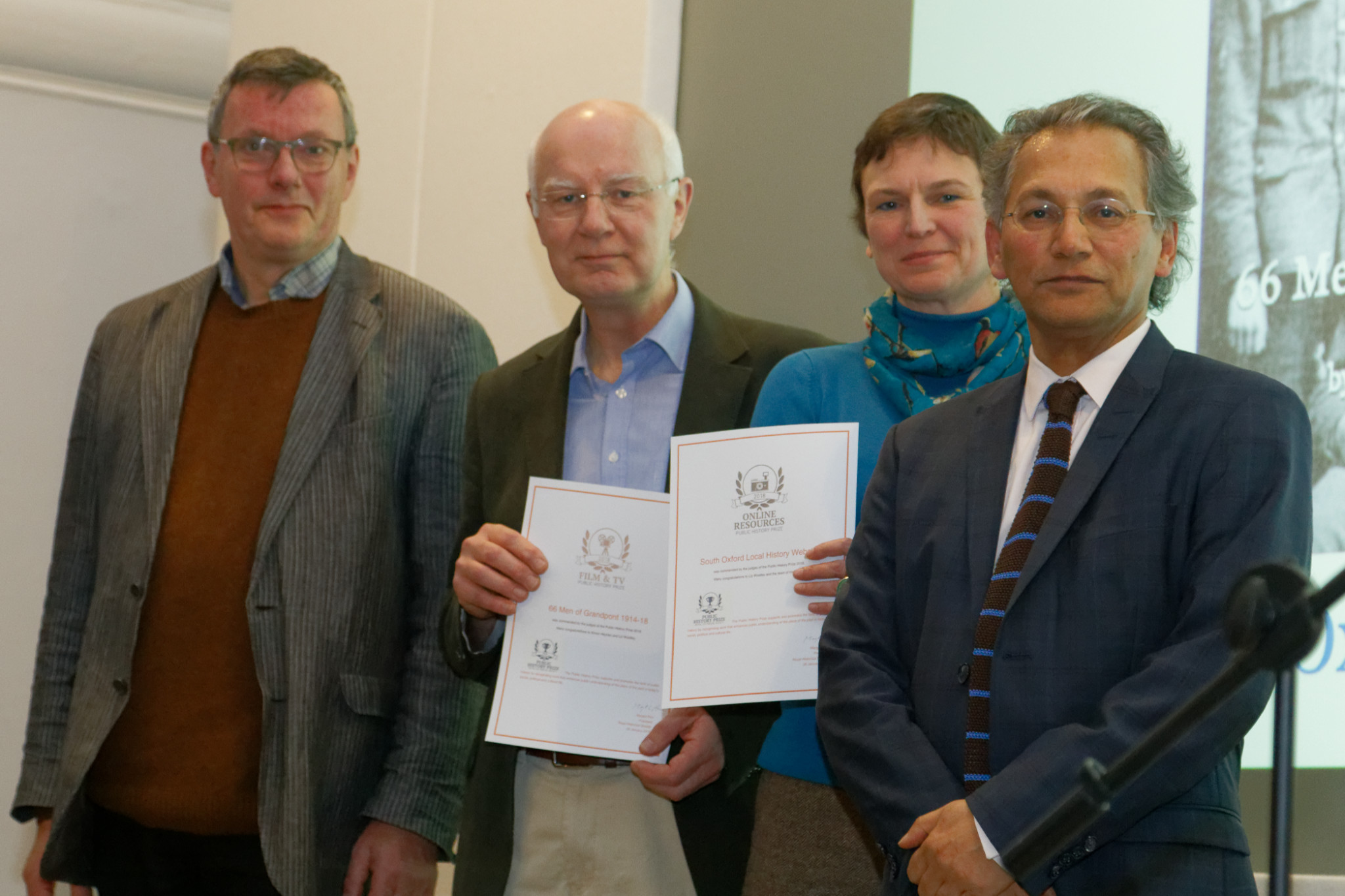 oring the stories of the 66 men named on the Grandpont First World War memorial. Local volunteers spent over a year researching the men, interviewing their descendants and those who now live in their community, and speaking to Oxford and military historians. They produced both an informative online resource and the 40-minute film 66 Men of Grandpont, directed by Simon Haynes with music from local composer Bruno Guastalla, both pictured from left with project coordinator Liz Woolley, and awards presenter Samir Shah.

The judges also commended an episode from BBC Radio 4’s ‘Archive on 4’ series in the Radio & Podcasts category, entitled ‘Instant History’, presented by Andrew Green (left). The programme followed University of Hertfordshire oral history students conducting interviews with people retiring in autumn of 2016, asking them to reflect on their working lives and look to the future. ‘Starting Again’ was the title given by the university to the project. In just one weekend, the large oral history team travelled as far afield as North Wales and Suffolk, Lincolnshire and Gloucestershire, in what they called ‘a never-to-be-forgotten experience’.

The Society was delighted that, in our 150th anniversary year, the Public History Prize awards showcased the diversity of exciting and important history being done across Britain by all different sorts of historians, from academic researchers to local volunteers, broadcasters to students. On Friday 16 March we are hosting a symposium on public history at Birmingham Museum & Art Gallery, ‘Making a Difference’, which will further explore the work of our prizewinners and discuss the challenges for public history. It will also include a workshop with the curators of BMAG’s new exhibition, ‘The Past is Now: Birmingham & the British Empire’. The programme is available here.