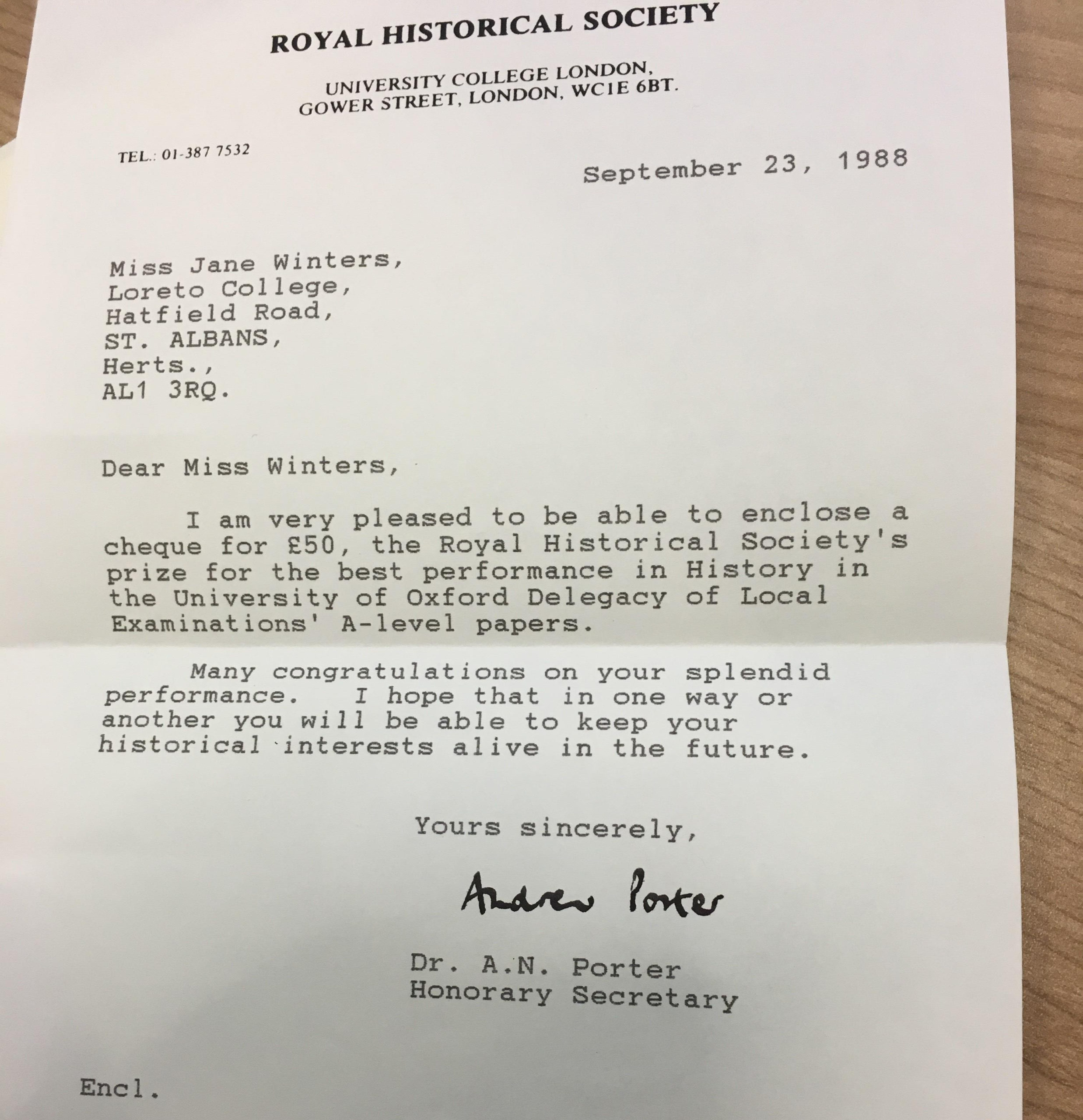 As our 150th anniversary year begins, Jane Winters reflects on her first encounter with the Royal Historical Society, and the importance of engaging and encouraging everyone who has an interest in history.

In the early autumn of 1988, just as I was about to set off for my first year at university, I received a very unexpected letter. It had been sent to my school, and eventually found its way to me via the head teacher and my younger sister (the transmission history is recorded on the envelope). The letter was from Dr. A. N. Porter, the Honorary Secretary of the Royal Historical Society, and informed me that I had won that year’s prize ‘for the best performance in History in the University of Oxford Delegacy of Local Examinations’ A-level papers’. I had no idea that such an award existed, let alone that it carried with it a cheque for £50; nor had I previously been aware of the Royal Historical Society. This unexpected achievement, however, was a huge boost of confidence (and finance!) to an anxious eighteen-year-old about to leave home for the first time.

Somehow (I suspect the school was to blame), my success came to the attention of one of our local papers, The Herts Advertiser. September 1988 must have been a very quiet news month, because photographs and an interview followed; I still remember trying desperately to think of anything interesting about myself that I could tell the reporter, and I’m pretty sure I wasn’t the best of interviewees. I don’t have a copy of the press cutting (or rather my parents didn’t keep one), but I do have a record of the story’s subsequent appearance in the Leitrim Observer on 21 January 1989. My father had shared the news with one of his cousins in Ireland, who had passed it on to the local paper, which kept a close eye on the fortunes of the Leitrim diaspora.

I hadn’t thought about this for many years, but receiving a letter from Margot Finn about the Society’s 150th anniversary celebrations reminded me of my first encounter with the RHS. Re-reading that first letter now, I am struck above all by its kindness. Andrew Porter concluded by expressing the ‘hope that in one way or another you will be able to keep your historical interests alive in the future’. I am delighted that, in one way or another, I have managed to do so. As an RHS council member it’s wonderful now to have the opportunity to be on the other side of the equation, working to support history and historians from schools to universities and beyond. During our anniversary year, we hope to offer those encountering the RHS for the first time the same encouragement that I received.

Jane Winters is an RHS council member, and Professor of Digital Humanities at the School of Advanced Study, University of London.