Each year, the Society awards four Fellowships to students enabling them to complete a History PhD. The RHS Centenary and Marshall Fellows for 2022/23 will shortly be appointed.

Here Dan Armstrong, one of current Centenary Fellows, reflects on his research. Dan’s study is of Anglo-Papal relations between the reigns of William the Conqueror and Henry I.  In this post he considers how a single source — a letter sent to Archbishop Lanfranc in 1122 from Pope Calixtus II — frames and informs his thesis.

The Anglo-Norman kings have traditionally been seen as erecting a ‘barrier’ between England and the continent to prevent the intrusion of papal authority. This conception of the Anglo-papal relationship is part of a confessional narrative on the English state, which sees William the Conqueror and his sons as prohibiting papal interference in the kingdom at all costs.

The foundations of this ‘barrier’ can be found in modern historians’ interpretations of the work of the Canterbury monk, Eadmer (c.1060 – c.1126). Specifically, their arguments are grounded in a passage in which Eadmer related how William I introduced a set of customs and laws into England that he and his predecessors had possessed in Normandy. These customs and laws concerned William’s claims and control over his bishops and abbots, including their contact with the pope. In this post I’ll focus on one of these in particular: the need for royal permission to receive a letter from the pope. 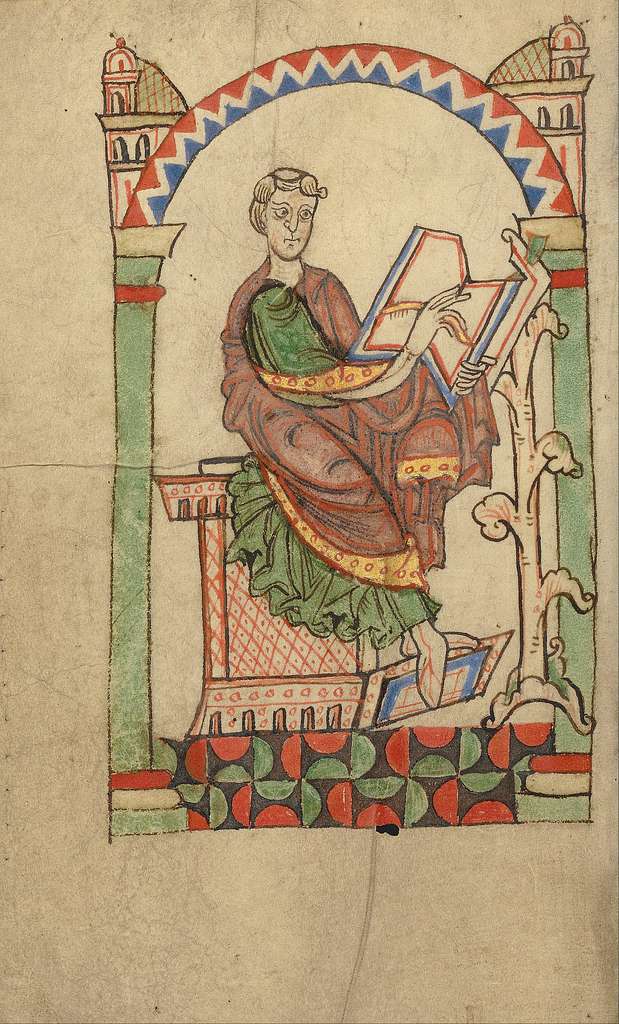 The idea that the Anglo-Norman kings had every papal letter referred to them seems impractical and improbable; there was certainly no central postal system sifting out papal letters of interest. Well over 200 extant papal letters addressed to recipients in England survive from the reigns of the Conqueror and his sons, with the majority seemingly unmonitored by the king.

Were the Anglo-Norman kings therefore as interested in papal letters as Eadmer suggests? Well, an incident in Hugh the Chanter’s (d. c.1140) ‘History of the Church of York’ shows how we might begin to nuance our understanding of Eadmer’s claim and in turn our appreciation of Anglo-papal relations. The incident in question comes from 1122, when Archbishop Thurstan of York received a summons from Pope Calixtus II to attend the First Lateran Council (1123).

The king summoned the archbishop to address the accusation. When Thurstan arrived, Henry received him with great joy and made no mention of the papal letter.

The pope’s messenger delivered this letter directly to Thurstan. According to Hugh, this was contrary to the custom of the realm since a pope’s letter of summons to a council ought only to be accepted with the king’s knowledge and licence. Henry I only became aware of the letter when a member of court secretly informed on Thurstan. The king therefore summoned the archbishop to address the accusation. When Thurstan arrived, however, Henry received him with great joy and made no mention of the papal letter.

The events which ensued after Thurstan’s papal summons points to how we might reframe our understanding of Anglo-papal relations. Papal authority was not opposed by the king on principle. The king neither had the means nor desire to micromanage every interaction of the Anglo-Norman bishops and abbots with the pope. Instead, the king wished to control those manifestations of papal authority within his kingdom that he perceived as interfering with his own rights. In the case of letters, the king’s interest may have been limited to those summoning churchmen to Rome. His ability to oversee the receipt of these letters, however, was clearly limited given Thurstan received his summons without Henry’s knowledge. Meanwhile, Henry’s treatment of Thurstan suggests the matter was not of serious concern.

It was good practice to obtain the king’s licence, but it was not a regulation enforced in every instance.

Crucial to understanding the incident is our conception of royal rulership and regulations. The ‘barrier’ model conceived royal power as something that was continually exercised, with the king actively blocking papal interventions. It seems more appropriate, however, to envisage royal power as reliant upon possible sanctions that could be enforced if an individual acted contrary to the king’s will. In the case of papal letters, the king’s control depended upon his bishops and abbots conforming to his expectations and reporting papal letters to him. It was good practice to obtain the king’s licence, but it was not a regulation enforced in every instance. 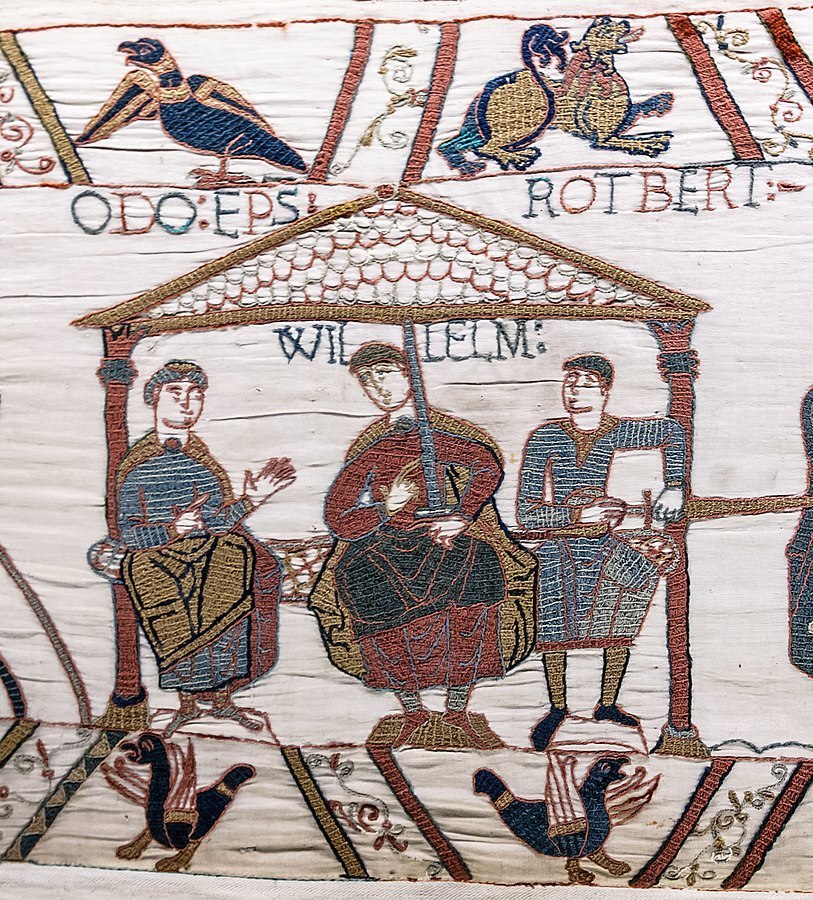 Bayeux Tapestry – Scene 44 – Duke William and his two half-brothers: to his right, Bishop Odo of Bayeux and to his left, Count Robert of Mortain, public domian

Those churchmen who decided not to report a letter to the king did so knowing that there would be possible ramifications for their actions. These consequences may not be immediate, but their behaviour could later be held against them if they were facing judgement and their past conduct was considered. There were certainly times when it was more pressing than others to obtain the king’s licence, such as during periods of royal-papal tension, or uncertainty caused by papal schisms. How imperative it was to gain the king’s permission also probably depended on the contents of a papal letter and how good a relationship the recipient had with the king.

The idea of the Anglo-Norman kings erecting a ‘barrier’ to block papal authority from the kingdom obstructs our picture of the complexity of the relationship. Royal opinion on papal authority was far more nuanced and there was certainly no grand clash over finite power between pope and king. The king wished to control some contact with the pope, but this control rested on a set of conventions and the threat of sanctions rather than a set of hard-and-fast rules enforced in every instance. 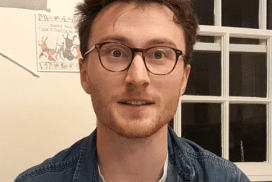 Dan Armstrong is an RHS Centenary Fellow, 2021-22, held jointly with the Institute of Historical Research, University of London.

As an RHS Centenary Fellow, Dan is completing his PhD on the subject of Anglo-Papal Relations, c.1066-c.1135, at the University of St Andrews. He aims to make the first comprehensive reassessment of the relationship between the kingdom of England and Rome since Z.N. Brooke’s book written 90 years ago. 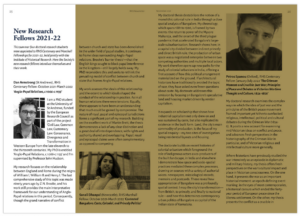 You can read more about the work of the 2021/22 Fellows — Dan Armstrong, Humaira Chowdhury, Sonali Ghopal and Petros Spanou —  in the November 2021 issue of the Society’s Newsletter.

Read more about Society’s Marshall and Centenary Fellowships programme, for History PhD students in the UK: calls for the 2023/24 Fellows will open in Spring 2023.