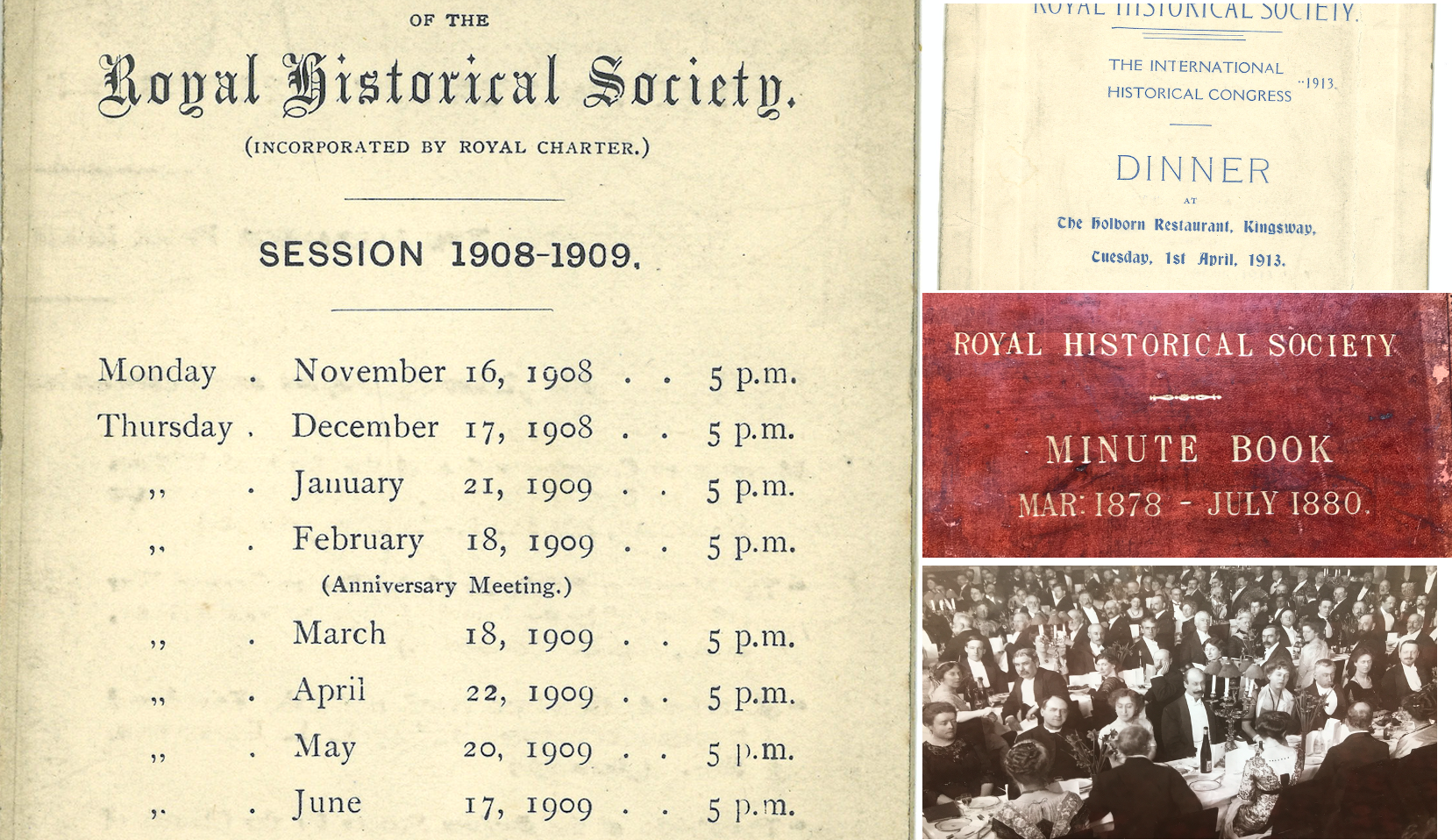 The Society is very pleased to have recently received generous support, from the Marc Fitch Fund, for the second phase of its archive development programme.

This new funding award follows the completion in January 2022 of ‘phase one’ of the project which saw cataloguing and conservation of the Society’s collection of papers relating to the historian and government adviser, Sir George W. Prothero (1848-1922). Further details of the Prothero section of the archive are available here.

Over the coming few months we will continue to research, catalogue and publicise three remaining areas of the Society’s collection:

In each case, work will see the creation of a new online catalogue, re-ordering of collection items, conservation and correct storage, and scanning of selected papers. The next phase of work will be undertaken by the Zoë Karens, who also oversaw completion of the Prothero catalogue in 2020-21. Zoë is a former archivist at the Institute of Historical Research, University of London.

Phase two of the project begins shortly with a review of papers relating to the Society, its activities, membership and management. Items here include the Society’s minutes, agenda and attendance books dating from the early 1870s; early financial and administrative records; fellowship and membership records; accounts of projects undertaken by the Society; and event cards advertising annual lectures from 1905 to 2022.

Below you’ll find a small selection of items relating to the Society which will be included in this work. Details of the new catalogues will be publicised and explained in the coming months as work on each of the three sections — RHS collection, Camden Society, and Elton correspondence — is completed. 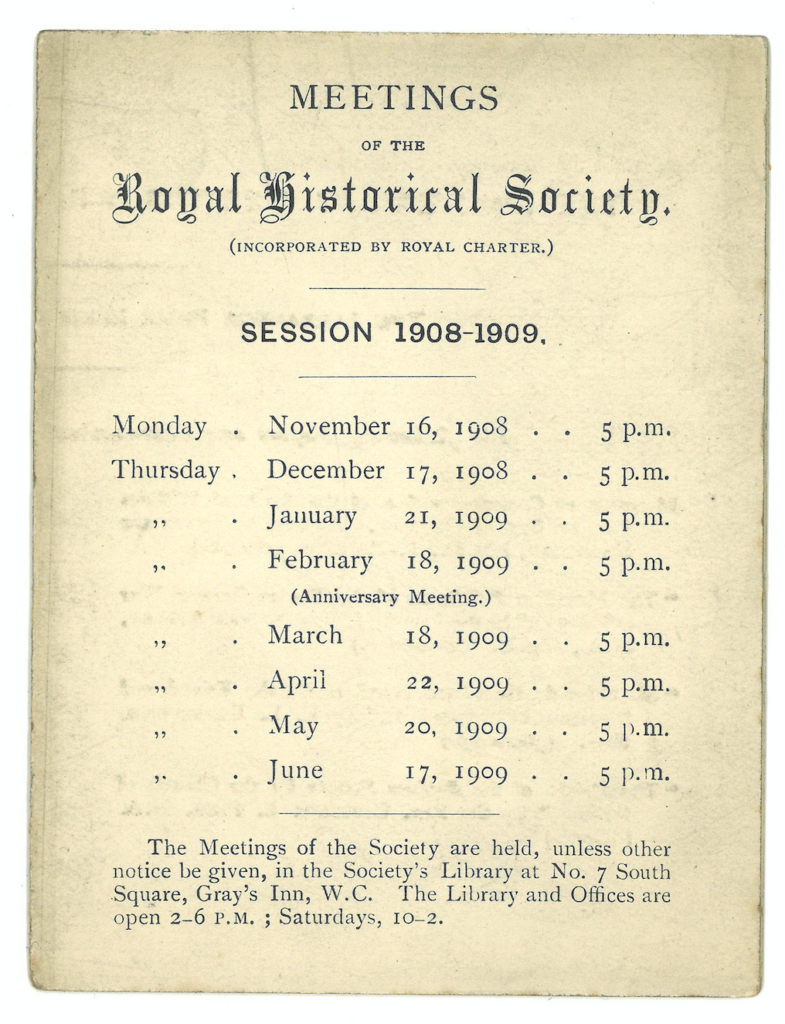 The Society’s events card (‘Card of Session’) for 1908-1909. The Society was at this date located in rooms near Gray’s Inn, central London. 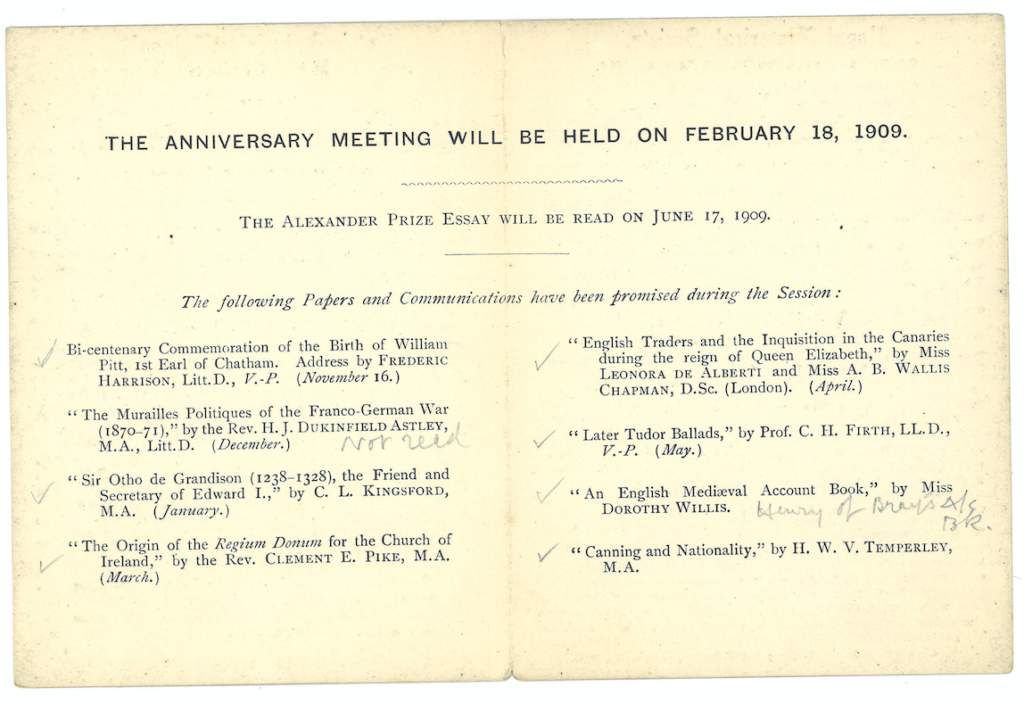 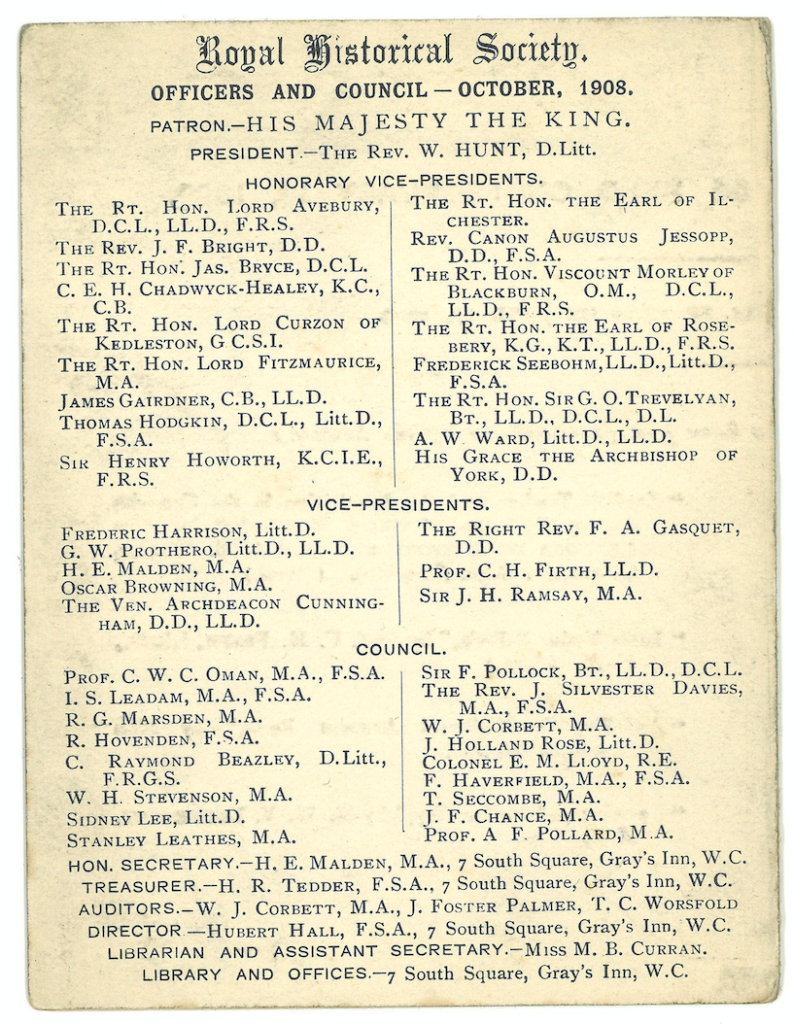 The reverse of the 1908-09 term card lists Officers, Council members and Staff at this date. The Society’s archive includes annual ‘Cards of Session’ from 1905 to 2022. Councillors at this time included Sidney Lee, editor of the Dictionary of National Biography, and Albert Pollard, Professor of Constitutional History and later founder of the Institute of Historical Research, in 1921. 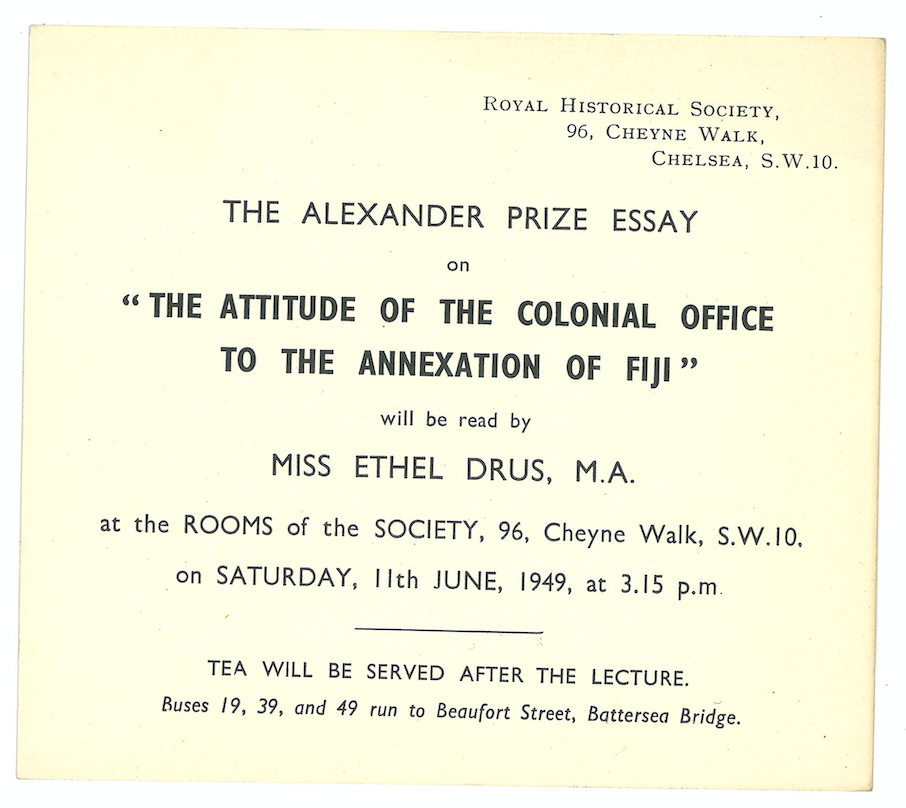 The Society’s collection also includes a set of invitations to individual lectures, including this reading by Ethel Drus (1919-2002) of her Alexander Prize winning essay. The Alexander Prize (which continues to be awarded annually to an early career scholar) was first presented in 1898. Ethel Drus was born and educated in Cape Town, South Africa, before studying for a PhD at the London School of Economics. She later taught at universities in Australia and Fiji and was Professor of Education at Southampton until her retirement in 1981. The paper was delivered at 96 Cheyne Walk, Chelsea, the Society’s home since 1939. 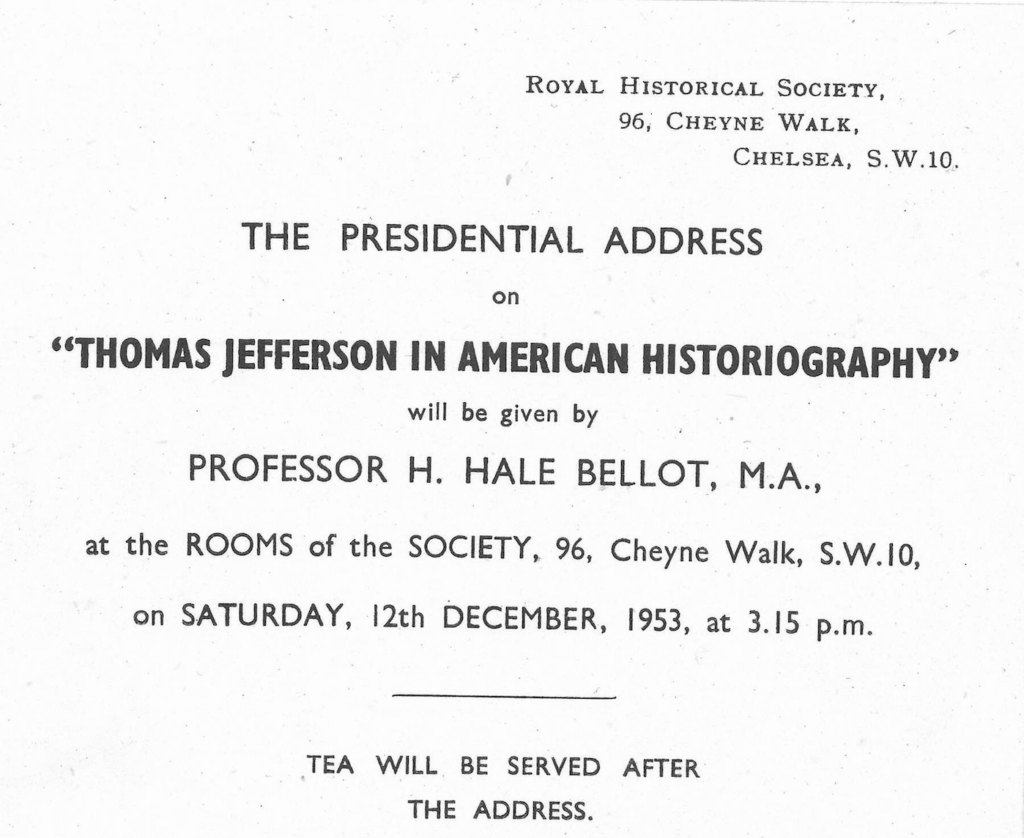 The historian of America, Hugh Hale Bellot (1890-1969), gave the Society’s annual Presidential Address between 1953 and 1957. President’s lectures continue to be delivered annually at the end of the calendar year. As for Ethel Drus’ paper, meetings were held on Saturday afternoons. 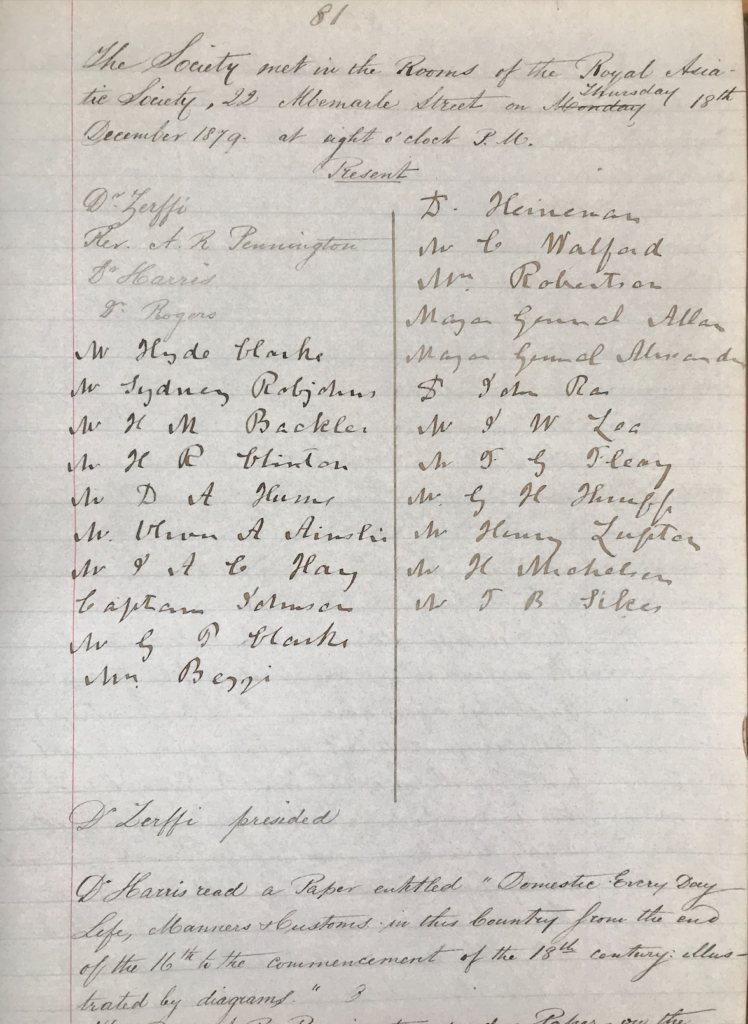 Bound minute books from the early 1870s offer insights into activities and discussions at regular Society meetings. This folio records a meeting on 18 December 1879, held at the Royal Asiatic Society. The first item was a paper read by Dr D. A. Harris: ‘Domestic Everyday Life, Manners and Customs in this Country from the end of the 16th century to the Commencement of the 18th century; illustrated by diagrams’. 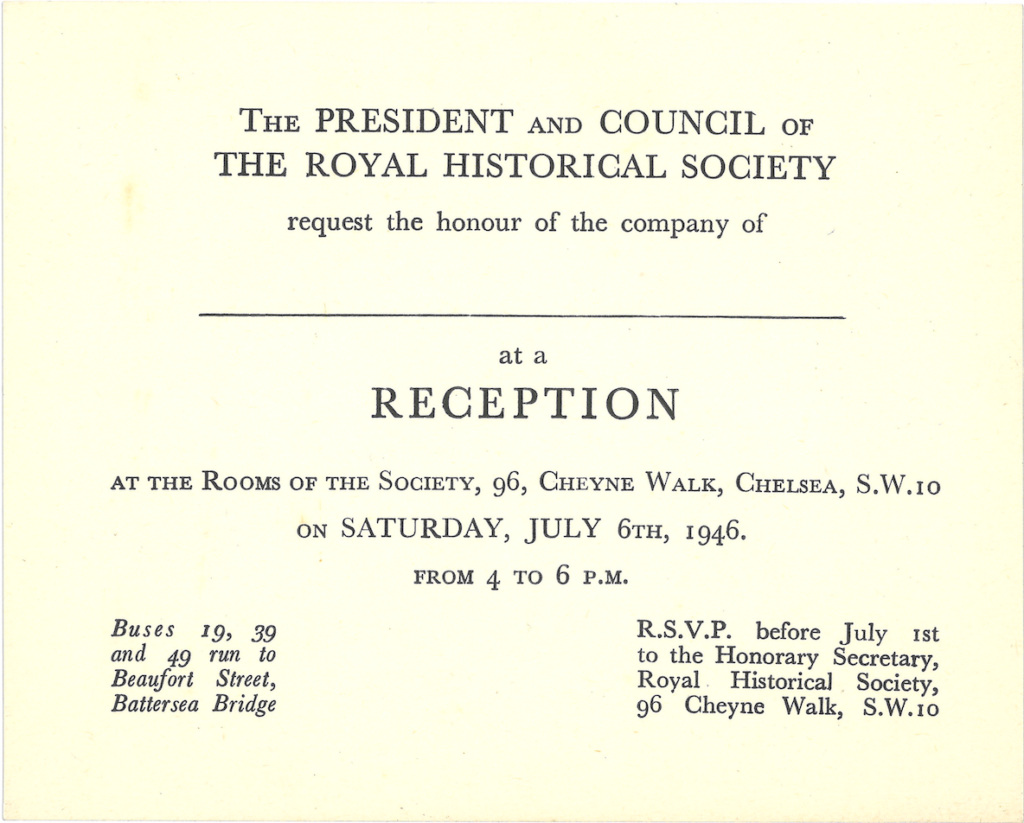 Invitation cards, like this one, were used for social gatherings – often following significant events in the Society’s calendar. 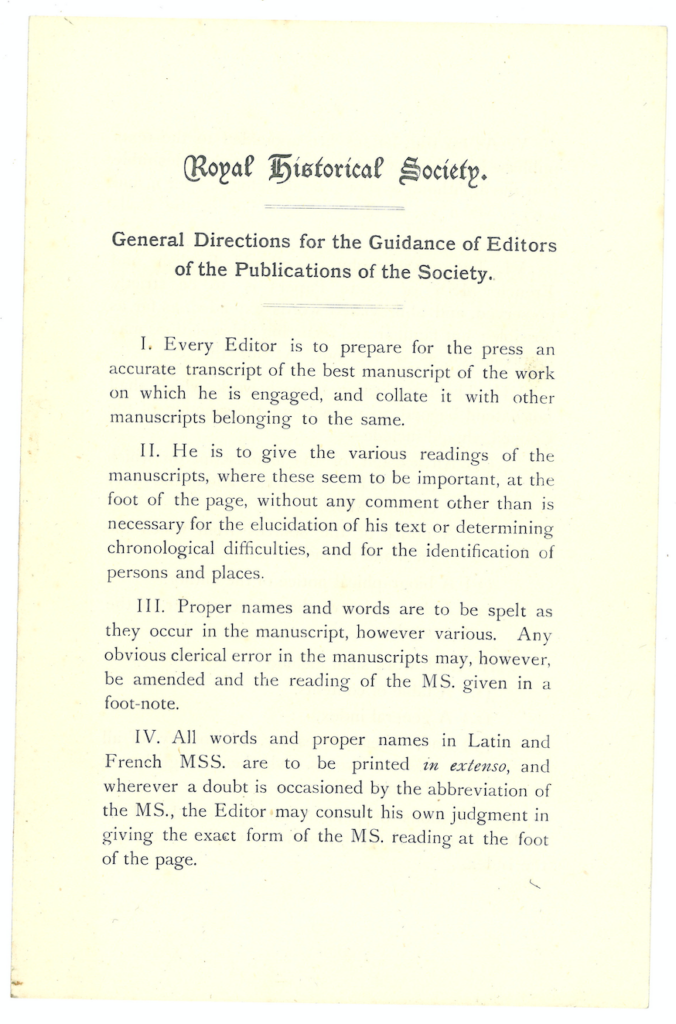 Page 1 of a four-page guide for editors working on Society publications (issued in March 1915). The Society’s has a long tradition of publishing manuscript primary source material as part of its ongoing Camden Series. 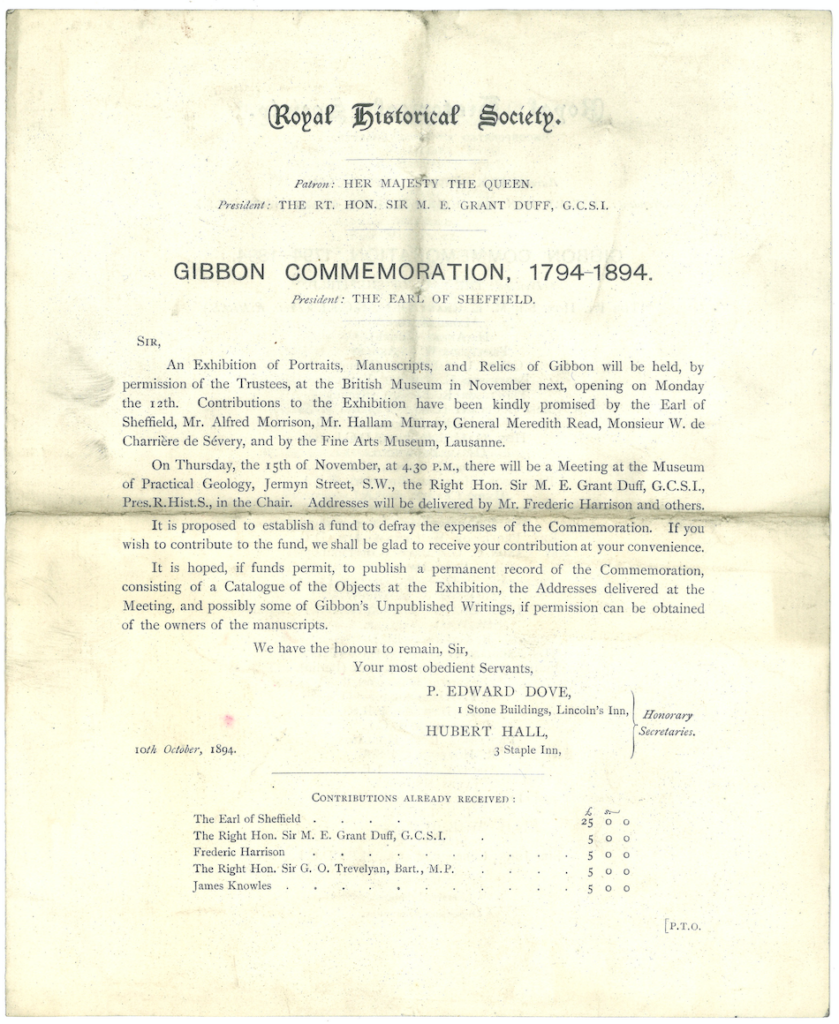 Early projects Included the Society’s exhibition, held at the British Museum, of the papers of Edward Gibbon to mark the centenary of the historian’s death, in 1894. This advert for the exhibition was also a fundraiser to ‘defray the expenses of the Commemoration’. Recorded donations include £5 from the historian and Liberal politician, Sir George Trevelyan. 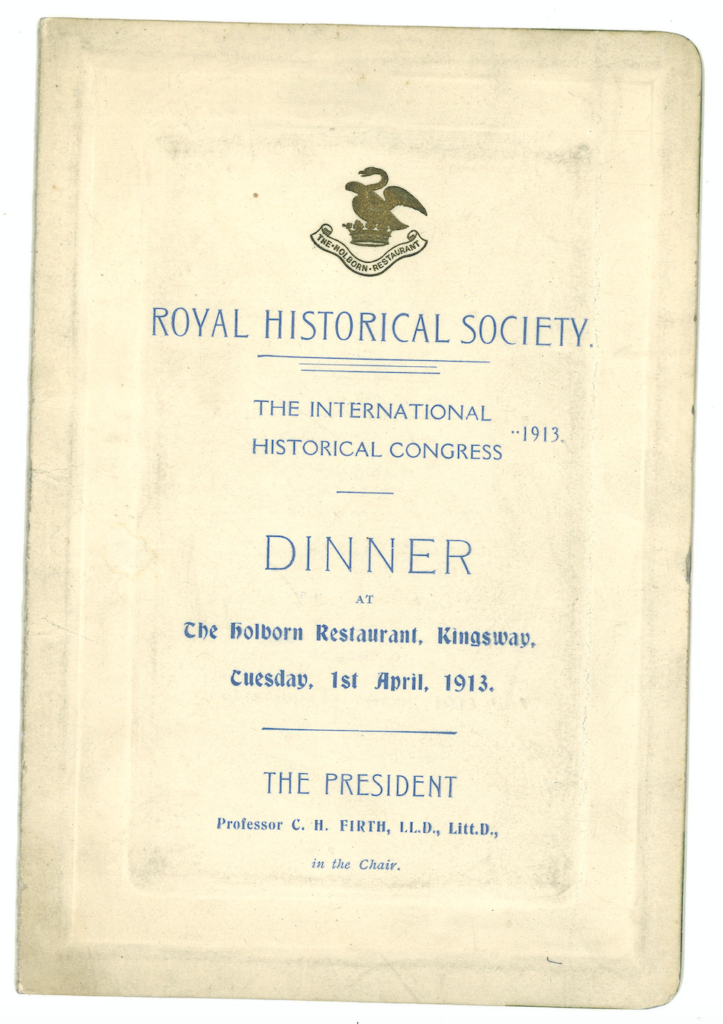 In April 1913, the third International Historical Congress gathered in London (previous meetings had been in Rome in 1903 and Berlin in 1908). The Society hosted a dinner two days before the start of the conference. 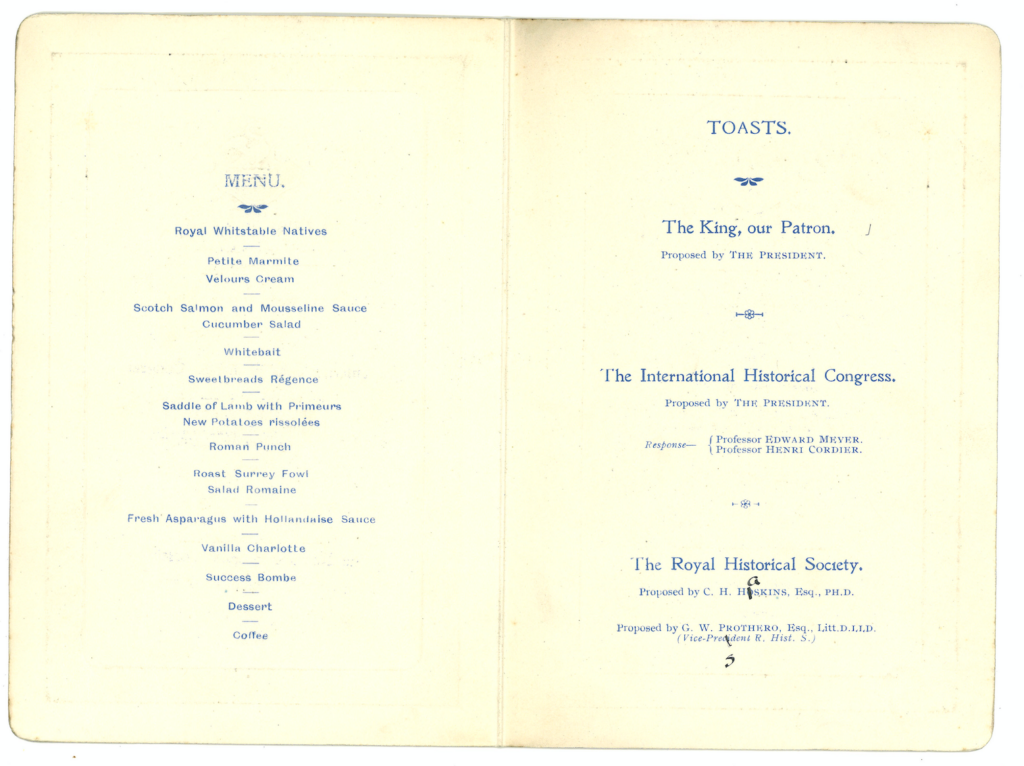 “All that is best in British hospitality was displayed in the entertainments which were tendered to members, especially to the foreign members, in lavish profusion. Evenings from half-past four o’clock on, were happily left free for such pleasures.

Two evenings before the formal opening of the sessions the Royal Historical Society gave a handsome dinner in the Venetian room of the Holborn Restaurant, at which Professor Charles H. Firth, president of the society, presided, and at which response to his address of welcome were made by Professor Eduard Meyer of Berlin, Professor Henri Cordier or Paris, and another address by the presentative of the American Historical Association, Professor Charles H Haskins on Harvard University.” 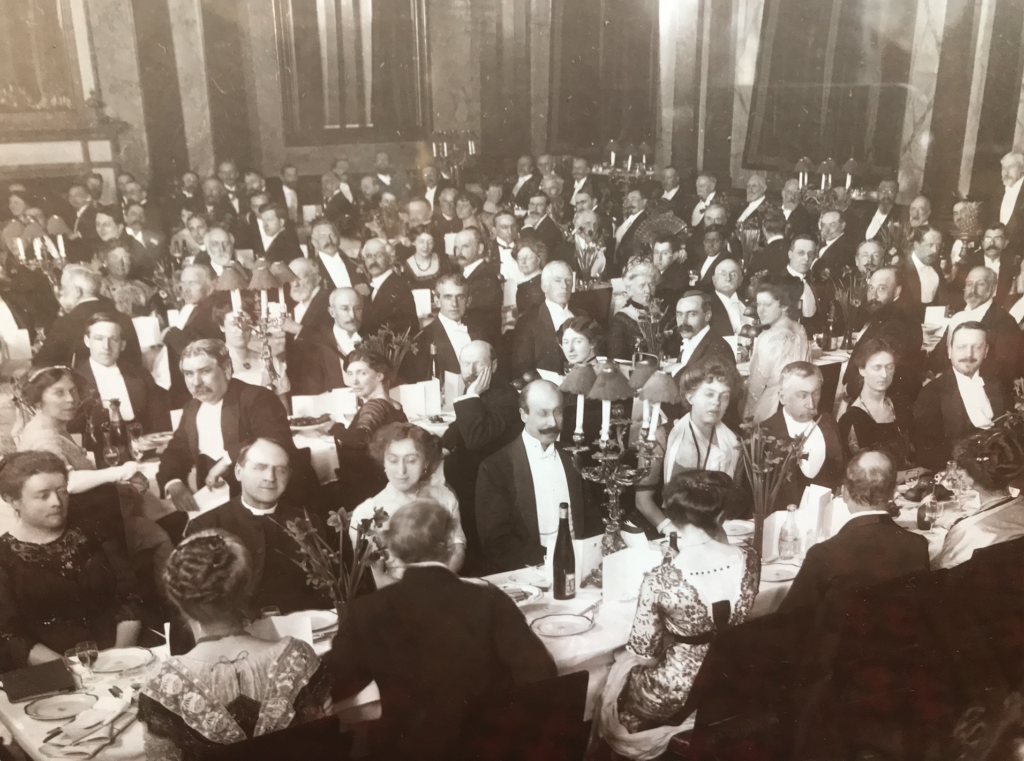 Diners at the International Historical Congress dinner, held on 1 April 1913 at The Holborn Restaurant, London. The Society’s President Charles Firth hosted delegates ahead of the conference.

More about the RHS archive 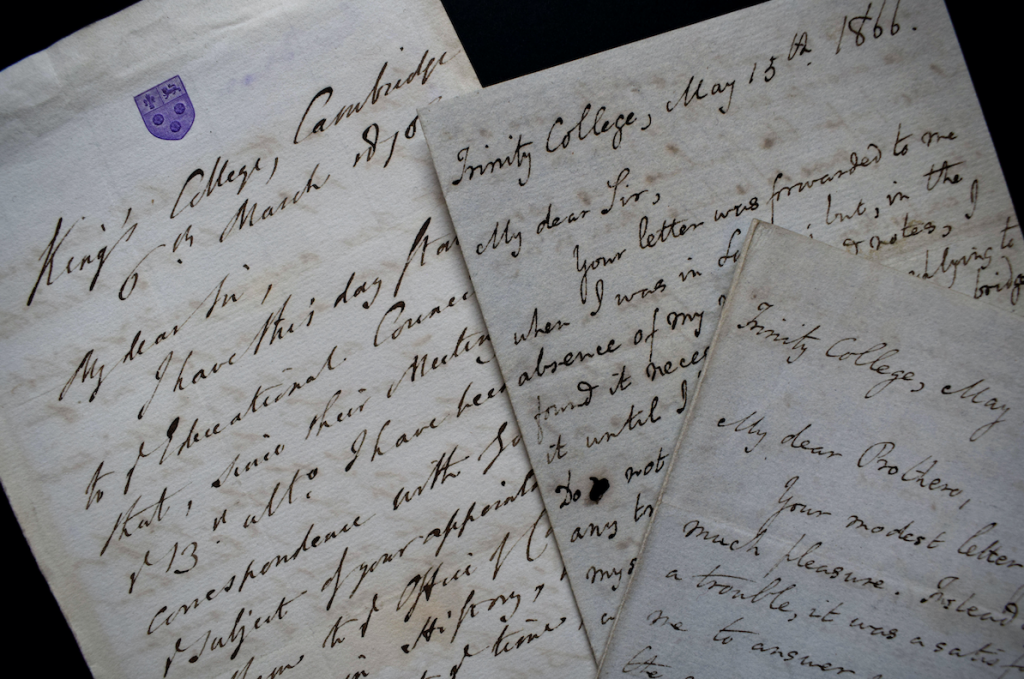 The Society’s archive is located in the RHS office at University College London. It is available for consultation, with priority bookings given to Fellows and Members of the Society to undertake research.

With our development programme, we hope to bring the archive to wider public attention, as an important statement on the development and membership of the nineteenth- and twentieth-century historical profession in Britain and overseas.

If you wish to view, or have questions about either the Prothero collection or wider RHS archive, please contact us via administration@royalhistsoc.org.

For more on the Society’s collections, please see the Library & Archive pages of the RHS website.