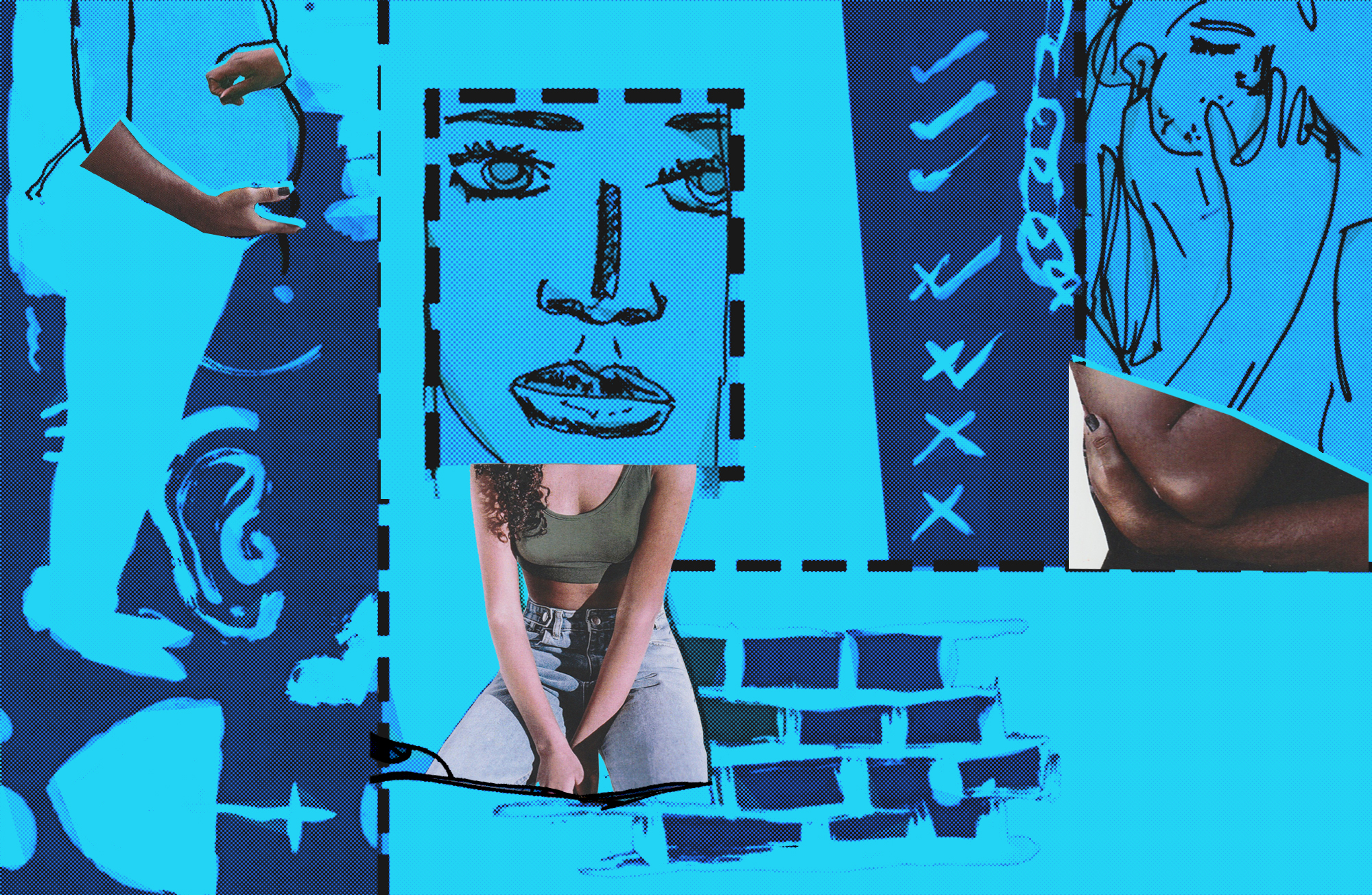 ‘I open up my mouth and I just sing’: Studying Black health and the humanities

In the eleventh post for our ‘Writing Race’ series, Dr Amber Lascelles introduces the Black Health and the Humanities project at the University of Bristol.

The project sits at the intersection of Black humanities and medical humanities, and brings together scholars whose research intervenes in Black health across a range of disciplines, including history, art, sociology, law, literature, media and theatre. As Amber explains, an important element of this work is the reclamation of ‘forgotten’ texts that have previously addressed themes relating to Black health.

Jacqueline Roy’s 2000 novel The Fat Lady Sings closes with an unexpected moment of defiance. The protagonist, Gloria, of Jamaican heritage, has been sectioned in a psychiatric ward in London for the majority of the narrative. Her seemingly erratic mental state, signalled by her disruptive behaviour and random outbursts into song, obscures a deep sense of depression caused by a recent bereavement. Gloria’s return home ignites a joyful feeling:

I go over all the promises I made myself. Be your age. Watch what you say. Don’t talk too loud. Never skip. Act ladylike. And I walk down the street, full of decorum. The rain feels good against my skin. Never thought I could enjoy getting wet. And, all the while, I feel the sounds in my throat: sounds of living, sounds of joy, like Josie’s still beside me. And then I can’t help myself; I open up my mouth and I just sing and sing. (283)

Gloria’s expression of joy, despite the adversity she has faced, is indicative of the ways Black women often seek solace in unconventional forms of self-expression that can begin a process of psychological healing. Throughout the narrative Gloria is silenced and dismissed by those in charge of her care. Her defiant bursts into song challenge conventional representations of womanhood and ageing, as well the pathologisation of forms of expression typical to Jamaican cultures as a sign of mental illness.

How racialisation affects health and wellbeing

The Fat Lady Sings was recently reprinted as part of writer Bernardine Evaristo’s Black Britain: Writing Back series for Penguin, which has recovered texts by Black British writers that received little mainstream attention at the time of their publication. In a comparable way, the Black Health and the Humanities project, based at the University of Bristol, seeks to highlight and call attention to Black writing, art and theory which engages with health issues, often in ways which reveal the entanglement of the social, political and emotional. Jacqueline Roy’s novel also brings to the fore issues of structural racism which have an adverse effect on Black people’s mental health. At a time when the existence of structural racism continues to be denied by the British government — and the 2021 Sewell Report exemplifies this denial — there is an urgent need to investigate how these structures impact health inequality.

The revolutionary energy of summer 2020

The summer of 2020 was an unprecedented time during which racial inequality was brought to the forefront of public conversation. The health inequalities highlighted by the COVID-19 pandemic, the global protests sparked by the murder of George Floyd, and critiques of Britain’s imperial past initiated by the toppling of slave trader Edward Colston’s statue during a Black Lives Matter protest in Bristol, felt to me like a breaking point that generated revolutionary energy. I joined the University of Bristol in October 2020 as a Research Associate on the ‘Black Health and the Humanities’ project, funded by the Wellcome Trust, working with the Principal Investigator Dr Josie Gill. The project was in part conceived from a need to reflect on and respond to the disproportionate impact of the COVID-19 virus on Britain’s Black population. While health inequalities and institutional racism within healthcare are not new, the need to build a critical mass of scholars whose research actively centres Black experiences was paramount.

What is the Black Health and the Humanities project?

The project sits at the intersection of Black humanities and medical humanities, attempting to address the lacuna, in the latter field, of research into how racialisation affects health and wellbeing. Our network of 20 PhD students and early career researchers in the humanities are currently participating in an online training programme consisting of five workshops taking place between March 2021 and March 2022. The workshops are led by scholars whose research intervenes in Black health across a range of disciplines, including art, history, sociology, law, literature, media and theatre. 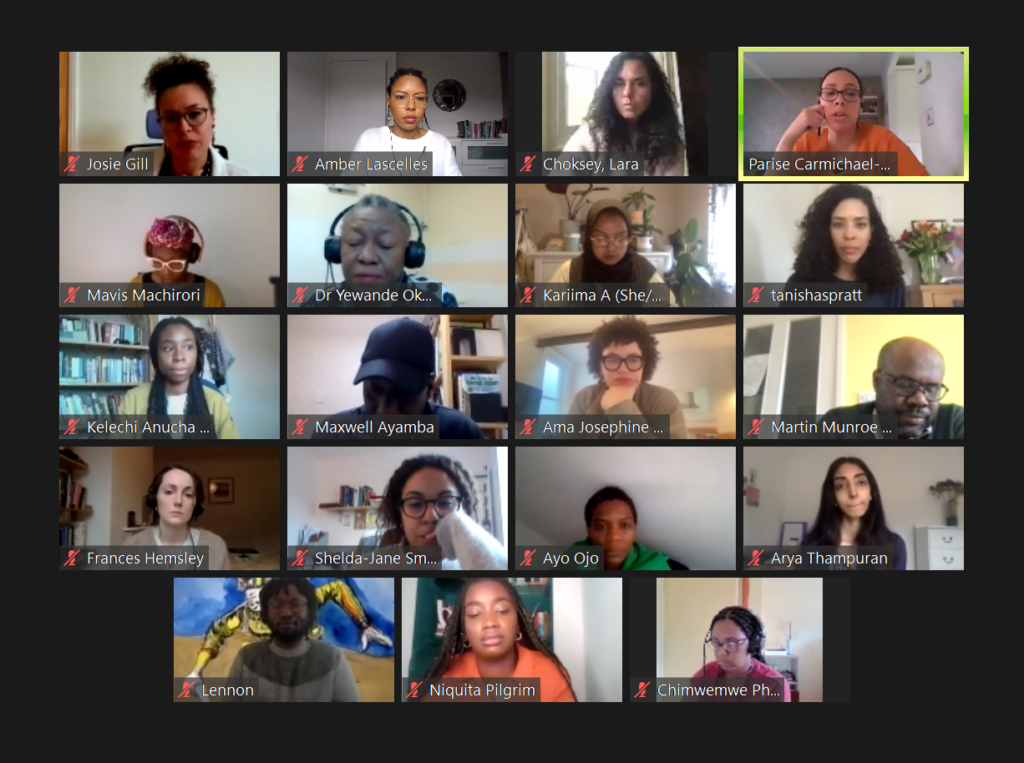 The questions we attempt to collectively answer include: how have Black writers, thinkers, artists and intellectuals represented and theorised Black health and wellbeing? How can the Black humanities shape and augment understandings of race, racism and illness in the medical humanities? And what role might the Black humanities play in improving health outcomes for Black people, particularly in Britain? 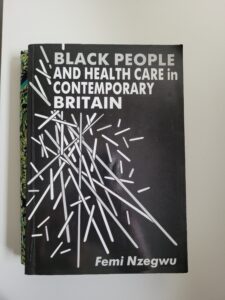 The initial literature review we carried out was intended to evaluate the ways in which disciplines across the humanities have contributed to discourses about Black health, from African, African-American, Black British and Caribbean perspectives.

We discovered that some texts published in Britain during the 1980s and 1990s are now out-of-print or not widely known — for example, Melba Wilson’s anthology Healthy and Wise (1994), which focuses on how illnesses such as cancer and issues like domestic violence affect Black women’s health.

Femi Nzegwu’s Black People and Health Care in Contemporary Britain (1993), another ‘forgotten’ text, is a qualitative study arguing that healthcare services in Britain may contribute to inequality due to their failure to adapt care provision to the ethnic background, education and economic security of patients.

In an attempt to ensure that these resources are more visible to academic and public audiences we have created a database, available on our website. Many of the works we have included were created by Black British scholars, artists and writers.

We feature Beverley Bryan, Suzanne Scafe and Stella Dadzie’s The Heart of the Race (1985) which in part examines African-Caribbean women’s experiences of structural racism in the NHS and social services; artist Donald Rodney’s In the House of My Father (1996-7), a photographic piece featuring a miniature sculpture of a house constructed from shards of the artist’s skin removed during an operation to relieve his sickle cell anaemia; and playwright Barry Reckord’s Flesh to a Tiger (1958), set in Jamaica and staged in London. The play dramatises colonial relations between Britain and the West Indies through the protagonist Della who is caught between two forms of power: obeah ritual, epitomised in the figure of her village’s patriarch, and Western medicine, symbolised by her failed romance with a British doctor.

One of the key methodologies behind the project that also connects with my Black feminist ethos as a scholar is the ethics of care we have established. In practice, this means creating and sustaining a ‘safe space’ in which we can process difficult health topics; ensuring that participants are supported in terms of their future career development; and creating a welcoming atmosphere conducive to research collaboration. We build reflective writing into each online workshop to encourage participants to connect the topics we explore — which might involve a different discipline — to their own research. This reflective time also ensures that academic knowledge is not disconnected from personal emotions and experiences.

Community and solidarity during COVID-19

Our methodological approach to the workshops is intended to foster interdisciplinary collaboration through group work and creative activities that often take participants away from their disciplinary ‘comfort zones’. Members of the network have said that it has created an essential space for research collaboration, community and solidarity during the ongoing COVID-19 pandemic. So far, two members have co-produced a podcast about how the workshops are helping them to develop their research, and another has written a poem that was published on the London School of Hygiene and Tropical Medicine’s Library and Archives blog, produced during the first workshop led by Dr Lioba Hirsch, entitled ‘Working in Colonial Ruins: Antiblack Racism and Global Health’.

At a time of social isolation in which we increasingly rely on digital tools to communicate, the research collaboration that the network is sustaining is crucial for a new generation of scholars working to challenge and actively dismantle health inequality and structural racism.

Cover image: Artwork by Naomi Gennery, commissioned by the Black Health and the Humanities project in 2020. 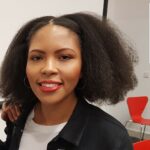 Dr Amber Lascelles is the Research Associate on the Black Health and the Humanities project, based at the Centre for Black Humanities, University of Bristol. Her broader research focuses on literature of the African diaspora, Black feminism and Black radical theory.

She is currently working on a monograph about transnational solidarity in Black women’s literature and has published research and reviews in African and Black Diaspora: An International Journal, the Journal of Postcolonial Writing and Wasafari.