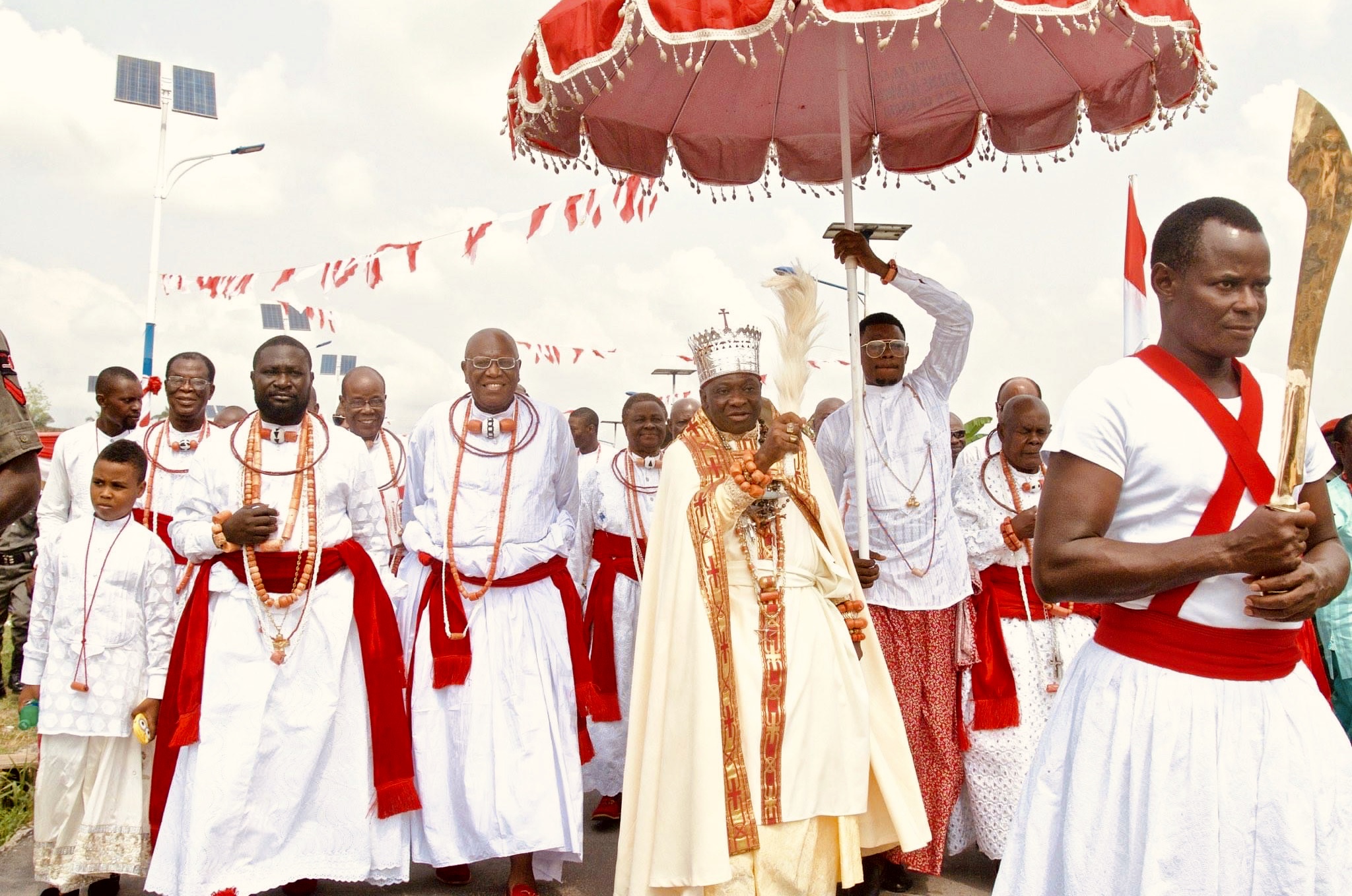 Nigerian cultural heritage abroad: the case of an Itsekiri chief

How do we study the material culture taken from Africa during colonialism, and what do we do about its continued alienation from places and communities of origin? Bringing us the seventh post in the RHS ‘Writing Race’ blog series, Allegra Ayida considers the material legacy of the nineteenth-century Itsekiri Chief, Nanna Olomu — held today at the National Maritime Museum, Greenwich.

Allegra’s work highlights the importance of centring the discussion on ethics, colonialism, and collections in the West, and on the communities which created these materials.

How do we engage with violent colonial histories? What are the ethical implications of addressing British imperialism from the perspective of colonised populations? Cultural restitution is emerging today as an important topic of debate both in academia and in public policy, with museums facing increasing scrutiny to acknowledge the violent nature of collections related to African cultural heritage. My work seeks to foreground African perspectives from Nigeria by piecing together the material record of a nineteenth-century African chief. This blog post is based on work for my Master’s dissertation entitled ‘The history and material culture of Chief Nanna Olomu.’

Who was Chief Nanna Olomu?

Chief Nanna Olomu was an influential Itsekiri Chief active in the late-nineteenth and early twentieth century, and a figure who is popularly perceived as a pioneer of Nigerian nationalist struggles because of his resistance to British rule. The Itsekiri are one of the five major ethnic groups in the oil-rich delta state. The Warri kingdom was founded in 1480 and is located in the Niger-Delta region of modern-day Nigeria. The monarch, known as the Olu of Warri, is one of ten traditional rulers in Nigeria. Whilst the Itsekiri people are a minority nationally — numbering about one million within the state, and a few hundred thousand in diaspora communities in Lagos, the United Kingdom and the United States — they have been represented at the highest levels of national politics and in the history of the region.

The nineteenth-century city of Warri became an important port for trade with the British. The abolition of slavery gave rise to the trade of other commodities such as rubber, groundnut and pepper in this region. The balance of power as equal trading partners began to shift to that of British domination with the beginnings of colonialism. The Niger delta region became a British protectorate following the ‘Scramble for Africa’ in 1884-5. This is where the story of Chief Nanna Olomu begins. A wealthy member of the elite, with a monopoly on trade in the region, Chief Nanna was famous for his ardent resistance to British rule.

The centenary of Chief Nanna’s death was celebrated in 2016 with a ‘Living History’ museum established in his former residence, displaying many artefacts from his life. Nanna still holds an important place in Itsekiri history, memory and identity. 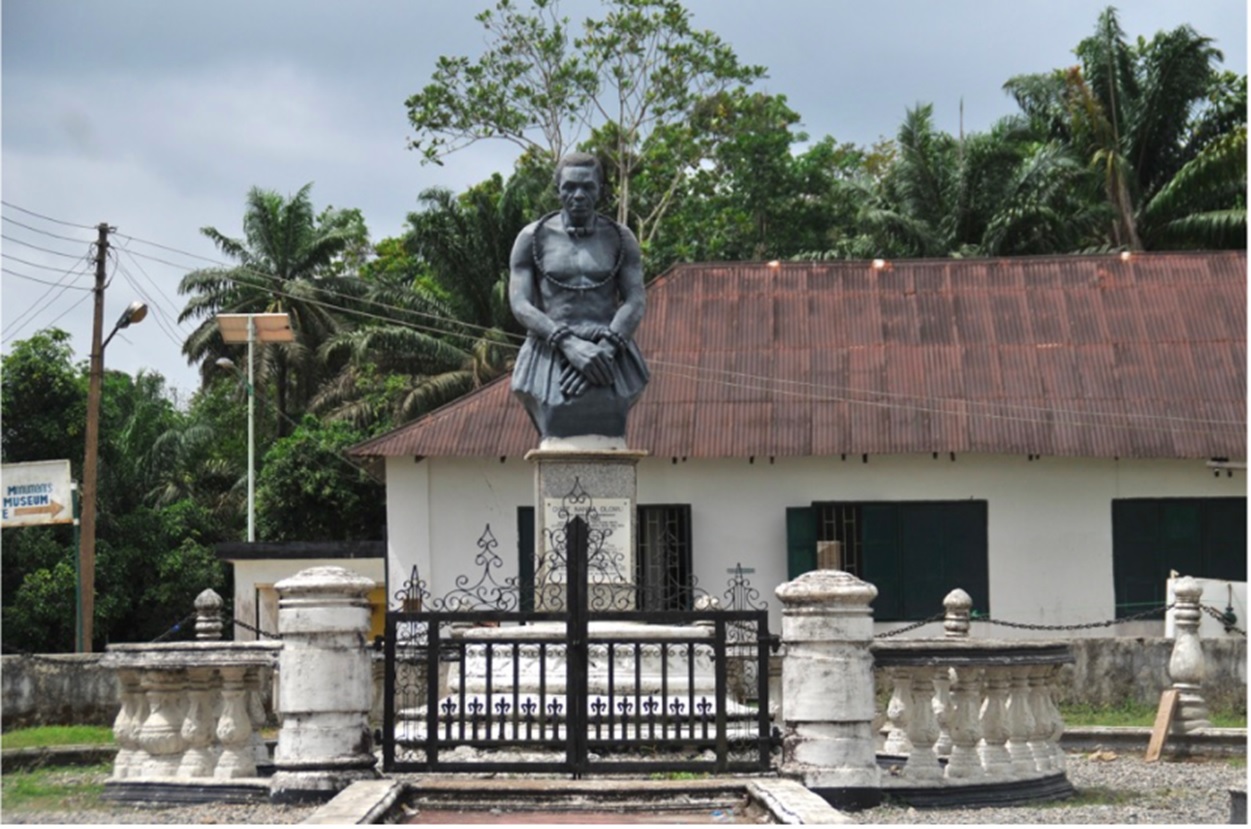 The Ebrohimi expedition was a ‘punitive expedition’ carried out by the British against Chief Nanna in July-October 1894. During the 1890s, in the Niger delta region, it was not uncommon for punitive expeditions to be undertaken by British troops who aimed to assert control in the region. A very well-known example of this is the Benin expedition of 1897, which has resulted in the Benin Bronzes being scattered across the Western world.

Chief Nanna fled to Lagos, but later surrendered and was tried in the new colonial court. His crimes included ‘making war on the British, of acting in opposition to the Consuls and of causing a breach of the peace in the Benin river. He was convicted on all charges and exiled, first to Calabar and later to Accra in Ghana’ (Lloyd, 230).

In August 1906 Nanna was granted permission by the British government to return from exile in Ghana. With his craftsmen, sons, relatives and others, Chief Nanna built a palace for himself and his family between 1907 and 1910, where he lived until his death in 1916.

What is Chief Nanna’s material legacy?

One prominent example of this is the National Maritime Museum, part of the Royal Museums Greenwich, which hosts the largest known collection of Chief Nanna’s objects outside of Nigeria, including an ivory trophy, two flags and a boat gun seized during the expedition. My current work describes these objects and analyses their significance. 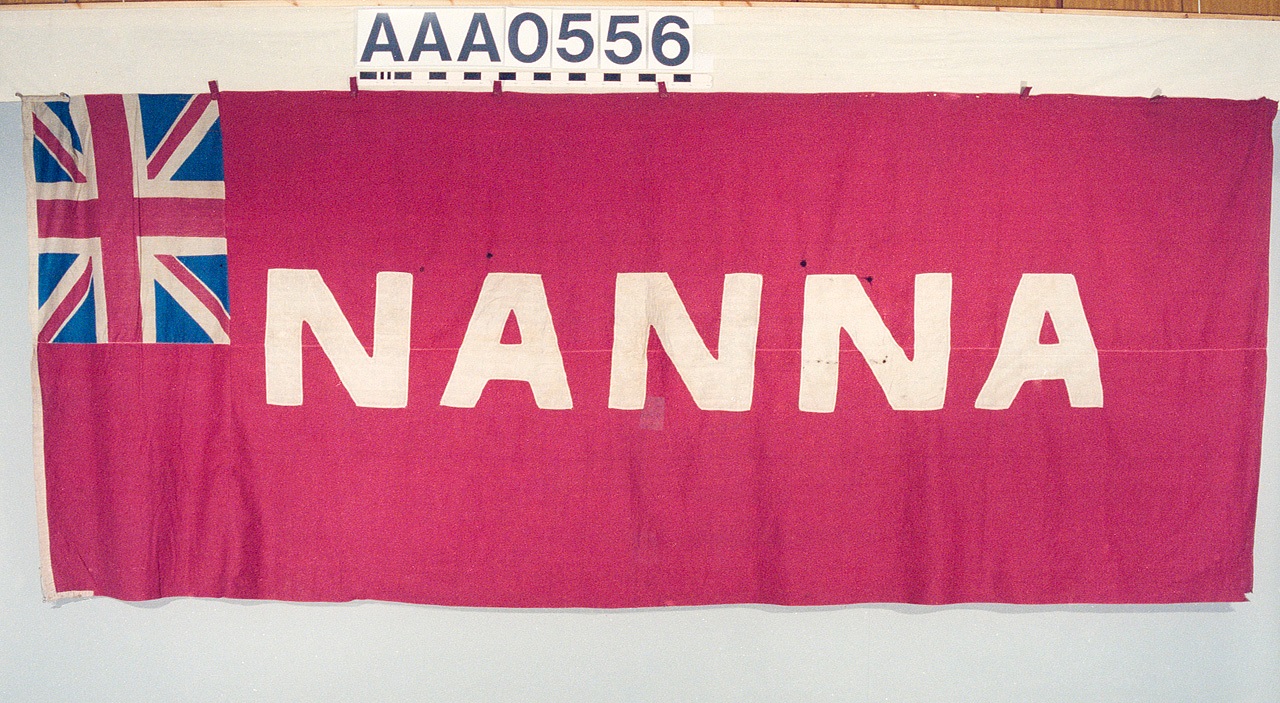 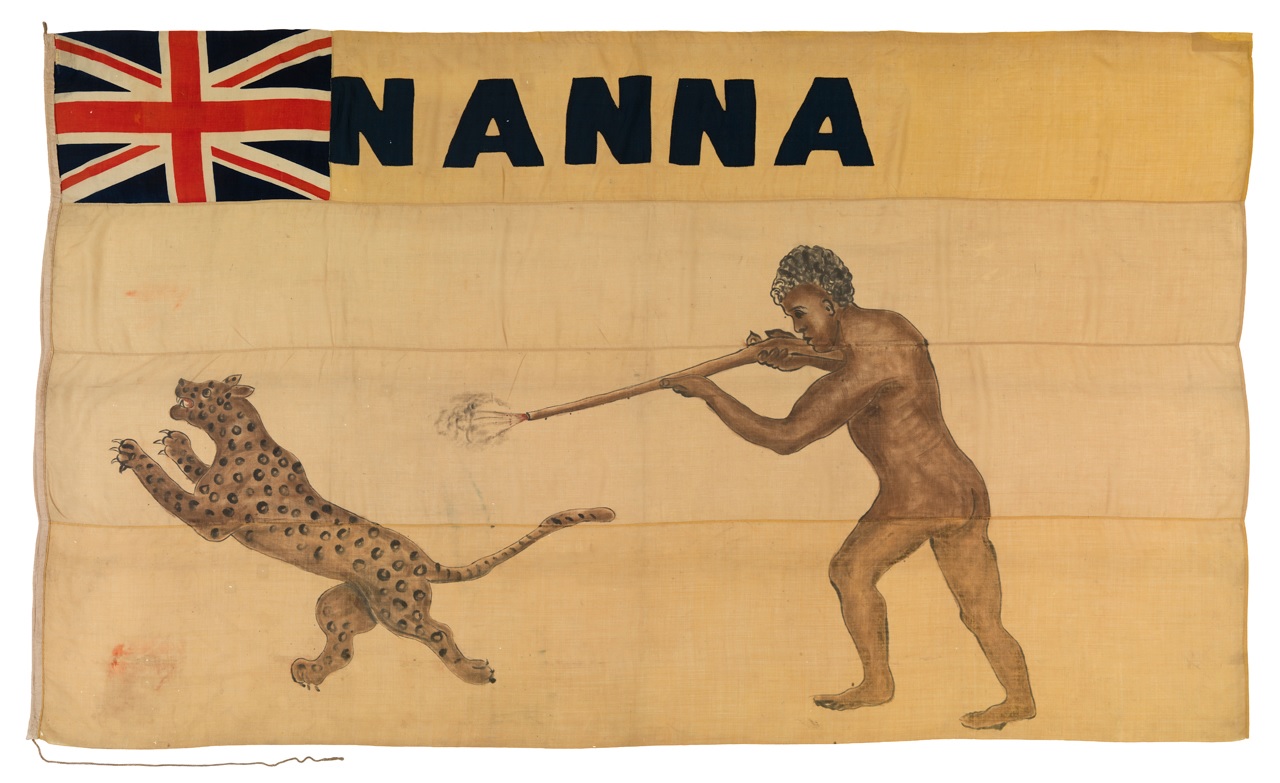 Let us consider the case of two Nanna flags displayed at the National Maritime Museum. The description for the museum entry simply reads ‘Itsekiri flag’. However, I argue that this flag has more meaning – it is a symbol of Chief Nanna’s authority. In comparison with the first flag, the second one features a more dynamic image. The materiality of the flags is constructed through a combination of sewing, paint, and machine stitching; this highlights the artistry of the flag and suggests it would have been expensive to make due to the variety of techniques used.

The Union Jack is present in the top left corner in both cases, the canton of the flag. I can only speculate here, but the Union Jack is representative of the fact that the flag was made abroad in Britain before being taken back to Chief Nanna. The hunter motif in the second flag is common among other indigenous flags of the period, the most well-known example being the Asafo flag of Ghana. Asafo flags are the insignia of Fante military groups, known as Asafo companies, located in the central region of modern-day Ghana. The motif of Chief Nanna hunting portrays an authority that Nanna would have sought to project as the head of a trading empire.

The Coronation Anniversary of the Olu of Warri Ogiame Ikenwoli at Ode-Itsekiri, 12 December 2016, with permission from Creative Flair NG. Also used as cover image.

The fact remains that Itsekiri cultural heritage looted by British troops is on display in museums such as the National Maritime Museum in Greenwich. This is but one example of the wider phenomenon of African cultural heritage being displaced across Western countries.

My research opens the door to broader discourses regarding the role of museums and the legacies of colonialism for African cultural heritage. I am interested in how to interpret these early histories in the light of contemporary social and political dynamics. The case of the Benin Bronzes, for instance, has been receiving increasing attention. This is a timely opportunity to continue such discussions through close research, like mine, into specific artefacts.

As a historian of Itsekiri origin and a descendent of Chief Nanna through one of his many children, my feelings regarding the presence of Itsekiri cultural heritage in the UK has shifted as I carry out my research – from initial excitement at the international reach of Itsekiri material culture, to dismay at the violence of the collection process. I believe that there is no way to display these items ethically in the West. Furthermore, I question how we research the heritage of our own communities when the work can be so emotionally fraught. The next important step, for me, is to move beyond a dialogue between museums and host communities to meaningful actions of restitution.

I am happy to connect with researchers who work on questions of cultural heritage and restitution in the African context.

Genealogy for the House of the Ologbotsere and House of Emaye, from P. C. Lloyd, ‘Itsekiri in the nineteenth century; an outline social history’, The Journal of African History 4: 2 (1963), 207–31. 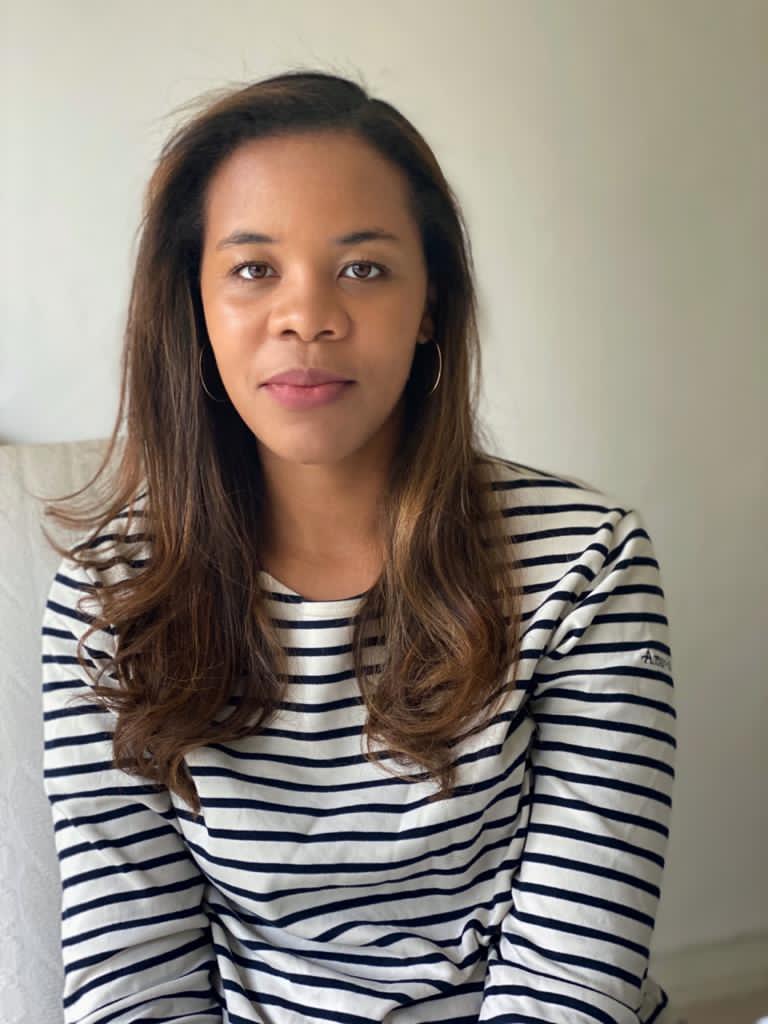 Allegra Ayida is an MPhil candidate in African Studies at Cambridge University. She holds an MA in World History from Kings’ College London and a BA in History from Wesleyan University. Her research focuses on the Warri kingdom, which is in the Niger-Delta region of Nigeria. She is an incoming first-year PhD history student at Yale University.