From Cold-War Bunker to Art Fund Museum of the Year: Transforming Gairloch Museum

On 12 October, during BBC’s UK-wide #MuseumPassion week, Gairloch Museum was announced as a winner of the highly prestigious Art Fund Museum of the Year 2020. Recognition of the success of an eight-year £2.4M project was a huge accolade for a small, volunteer-run, independent museum on the coast of the North-west Highlands of Scotland.  In this guest post, Pauline Butler, the Museum’s Board Secretary, describes the journey from a delapidated nuclear bunker to an award-winning museum. 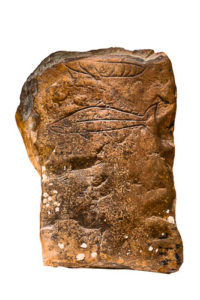 The Gairloch Pictish Stone, found around 1870, had been part of the local graveyard wall before coming to the Museum. Credit: Gairloch Museum

The village of Gairloch, on the shore of Loch Gairloch in the North-West Highlands of Scotland, has had a museum dedicated to local history since the original Gairloch Heritage Museum was established in a 19th century farm steading in 1977.

The Museum provided a home for the first Pictish Stone ever found on the west coast mainland, and housed artifacts, textiles, machinery and documents relating to the social history of Gairloch parish, assembled over years by the local history group. It won several awards and became a well-established tourist attraction. However, the lease was due to expire in 2015 and, as the collection grew, it became essential to consider how best to ensure its long-term future.

A Museum in a Bunker?

The Museum’s trustees considered many different options – purchase or further lease of the existing site to build a substantial extension, barn conversion, or a new build on vacant land. But despite all efforts, no solution met the requirements for location and facilities, until, in September 2010, the trustees learned of the soon-to-be-redundant Highland Council Roads Depot. It was in the village centre and next to developments including a social enterprise, tourist office, retail and housing, which already made good use of a semi-derelict brownfield site.

Although not listed, the Depot itself was of historic interest; it had been built in the early 1950s, the Cold War era, as an Anti-aircraft Operations Room (AAOR), to track incoming Russian bombers. Constructed to be nuclear-bomb-proof, it was uncommercially expensive for any would-be developer to undertake demolition and disposal.

Having viewed the dilapidated building, held preliminary discussions with Highland Council as to their intentions and commissioned an initial feasibility study, the potential was evident. Highland Council proved to be very receptive to the proposed new purpose and agreed to sell the whole site for £1 as a community asset to Gairloch & District Heritage Company.

After two busy years of consultations, detailed planning and consultancy activities, the Museum volunteers made the first applications for serious money to take the project forward. And then, in June 2013, came a big setback: the Heritage Lottery Fund declined to offer a grant, unconvinced that a ‘remote’ Highland parish, with fewer than 2000 inhabitants, had the capacity to carry through such an ambitious project. That could have been the end of Gairloch Heritage Museum. Instead, the volunteers became ever more determined. They ascertained what was required to allow a second application, prepared a detailed Options Appraisal to validate the AAOR as the best option available and, above all, demonstrated that the project was ’good value’. In March 2015 and to great relief, HLF agreed to support the development of the ‘new Museum’ project: Our land, our people, our story. 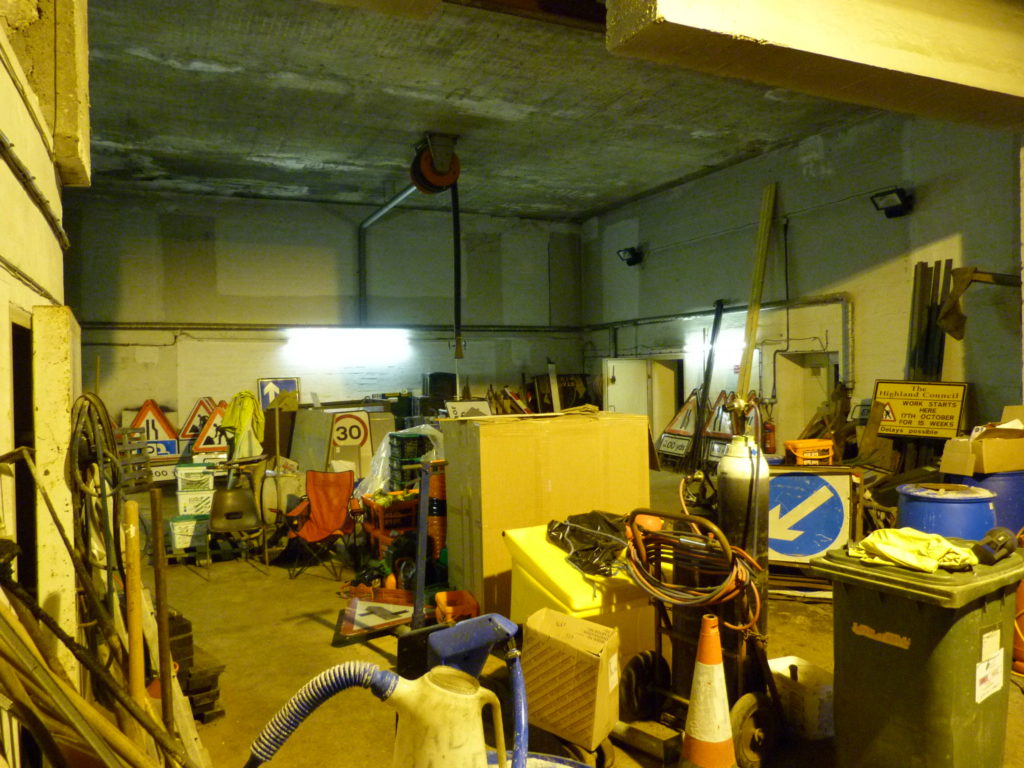 Internal view of the bunker, a Highlands Council Road Depot, before work on the conversion began. Credit: Gairloch Museum.

Planning A Museum for the Twenty-First Century

Following necessary procurement and tendering processes, we appointed an experienced project manager, architects and design team with considerable expertise in converting unlikely buildings for heritage use. The detailed plans incorporated spacious collection display galleries to encapsulate the history, culture, beauty and character of the crofting settlements. For the first time, there would be purpose-built archive and artifacts stores, library, offices, retail spaces and a café. West Highland College were partners in the project from the beginning, with rooms to meet their need to extend adult education provision and a shared activity/education resource. During the project, two very capable young professionals were given fixed-term contracts to work with Dr Karen Buchanan, our qualified curator (and only employee), in presenting and interpreting the new displays to attract a broader audience, trialling a comprehensive events and activities programme and engaging with our learning and sector partners.

The most daunting challenge was to raise the funds required. Construction could not start until every penny of the budgeted costs was secured. Over time, we secured grants from twenty-three public and private trusts. Significant donations and pledges came from local residents and members. Fund-raising efforts ranged from ‘open gardens’ to producing both a cookery and a ‘Then and Now’ photography book, from running pub quizzes to showings of historic films, from ceilidhs to sponsored walks, with raffles, Grand Auction and pennies-in-a-jar all helping the total, slowly but surely, to reach the required £200,000.

This sustained community effort undoubtedly helped both to encourage grant-givers to be generous and to impress the Art Fund judges.

After some hard decisions to make cost savings without compromising the integrity of the conversion, a Highlands firm was awarded the contract in summer 2017. Work on site started in February 2018, with the target of completion in November, transfer of the collection from the steading premises over winter and opening in April 2019. But the reinforced-concrete walls, 2ft-thick, proved resistant to core-cutting for doors and windows, and the installation of services and casting of floors also caused delays. So, the public were welcomed just a week before the ‘official’ opening ceremony, undertaken by H.R.H. the Princess Royal, on 9 July 2019. 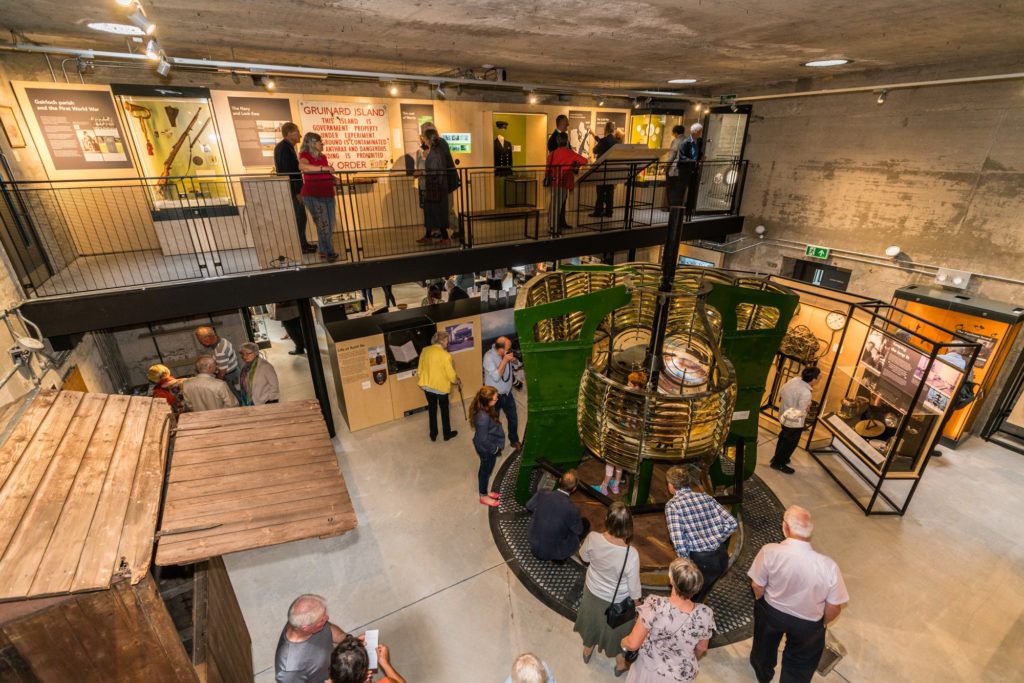 The new Museum interior – formerly the Cold War anti-aircraft operations room – with the original lens from Rubh Re lighthouse as its centrepiece. Credit: Gairloch Museum.

Sixteen months on, and now open again (thank goodness) after ‘lockdown’ with all necessary Covid-related measures in place, all at Gairloch Museum agree that the architects, museum designers, builders and installers have created an exceptional new heritage and learning centre. Comments in ‘in-house’ and social media feedback, have also been extremely complimentary.

The announcement that Gairloch was a winner of Art Fund Museum of the Year 2020 is the ultimate recognition of our achievements, and we have received an overwhelming deluge of congratulations. The award citation sums up what our hopes for the museum have always been:

“the rebirth of this truly special museum … the tale of people-power, determination, and local pride, which transformed a village eyesore into … a buzzing new community hub and produced a sustainable cultural landmark for generations of visitors to enjoy”.

Comments or enquiries are welcome: secretary@gairlochmuseum.org.