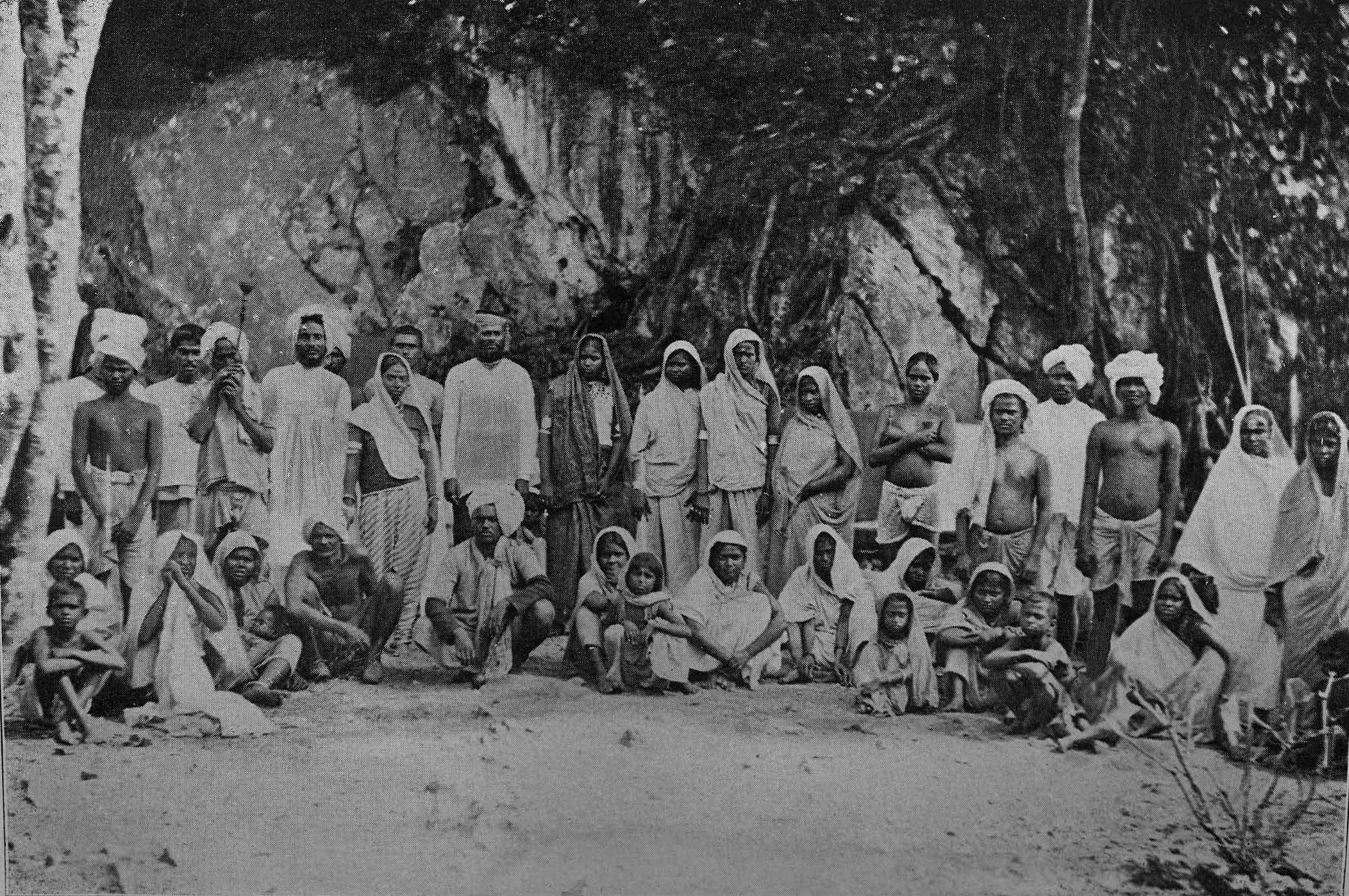 Beyond this Day – 29 January 1838: Indian Indentured Trade and ‘The First Crossing’

Empires are defined by movement—whether of goods, ideas or peoples. Bringing sugar to the metropolitan plate has a long and complicated history, involving labour migration across continents, instances of plantation brutality, slavery, and other forms of unfree labour. To mark the centenary of the abolition of the Indian indentured trade (1837-1920), Purba Hossain, the 2019 RHS Marshall Fellow, considers the significance of this date for the history of labour servitude, migration and diaspora.

On 29th January 1838, the ship Hesperus set sail towards British Guiana. Its cargo was Indian labourers destined for plantation work. Set in the backdrop of the British colonial regime in India, and colonial plantation regimes across the Caribbean, the sailing of the two ships Hesperus and Whitby in January 1838 marked an important juncture. It represented the beginning of a centralised system of labour migration from British India to colonial sugar plantations. It not only heralded the beginning of what came to be known as the Indian indentured (contractual) trade, but also signalled the beginning of debates in Britain and India on whether or not this new plantation labour system was a revival of slavery.

When slavery was abolished by an act of parliament in 1833, the British Empire straddled several sugar plantation colonies. Sugar production was a labour-intensive process. Working on the plantations involved sowing, reaping, cutting and processing the sugarcane in sugar boiling units. Moreover, British planters had by this time invested thousands in setting up plantation estates, and formed strong parliamentary lobbies to push policies that safeguarded their profits from the sugar trade. As Abolition deprived planters of their labour base, they suddenly found themselves needing to source manpower from elsewhere. Labourers who were mobile, compatible with the tropical climate, and adept at agriculture fit the demand. After some unsuccessful attempts at using emancipated slaves and European labourers (mainly Portuguese labour from Madeira), Indian indentured labour emerged as the most popular and longstanding post-slavery labour system. Indian labourers were recruited mainly from eastern and southern Indian villages, who entered into five-year labour contracts with planters and sailed from the three major port cities of Calcutta, Bombay and Madras.

The migration of Indians overseas for trade or labour was not a new phenomenon. Indian labourers and convicts had long been employed across the globe in domestic work, agricultural labour or public works. However, what had been an unregulated and often spontaneous migration became an organised, centralised system of contractual migration with the intervention of British planter John Gladstone. The owner of several sugar plantations in the West Indies, Gladstone (father of four-time Prime Minister William Gladstone) recognised the threat that Abolition posed to planters and traders. In 1836, he started negotiating with Indian merchant companies and British parliamentarians to allow planters to procure Indian labourers for overseas sugar plantations. This led parliament to pass an act in favour of Indian indenture, sanctioning the sailing of two ships Hesperus and Whitby to the British West Indies. Thus began the Indian indentured trade, which sustained the sugar trade for decades to come, and created Indian diaspora communities across the globe.

‘Haec olim meminisse jubaviti’ (‘One day we will remember these things gladly’): thus starts the journal of Theophilus Richmond (1815-38). A 23-year old doctor from Bedfordshire, Richmond was appointed as surgeon on board the Hesperus. His diary offers a detailed account of the ship’s journey and labourers’ experience on the voyage.

The Hesperus sailed from Calcutta on 29th January 1838. Carrying 165 Indian indentured workers on board (of whom thirteen died during passage), it arrived in British Guiana on May 5th. Richmond described Indian labourers onboard as ‘very handsome well formed fellows and as happy and contented as possible, having apparently but little of the Mal de Pays [homesickness] in their composition’. They were accommodated within the main deck and the fore masts, and were provided regularly with ‘Rice, Salt Fish, Peas, Turmeric, Chili’s [and] Tamarinds’.[1]

His journal also included a detailed account of the cholera that broke out on board: ‘The virulence of the disease in [a labourer] may be judged from the duration of his illness: at 8 o’clock he was in good health […] and at 1 o’clock he was a corpse, a lapse of scarcely 5 hours.’ Outbreaks of cholera were common on indentured voyages and represented one of the many dangers of close-quarter voyages. In interviews conducted by the British colonial state, Indian labourers also complained of mistreatment and corporal punishment on board ships, and stated that they often had no idea how far they were going. These complaints have parallels with transatlantic slave voyages, although the degree of similarity between slavery and the indentured labour regime is the subject of live historical debate.

As a first-hand account of the voyage of the Hesperus, Richmond’s diary is a prime source on the Indian indentured trade. In fact, hand-drawn illustrations in his diary are considered by historians as the ‘very first images of East Indians to be transported into the West during the indenture period’.[2] His illustrations of ‘A Mahomedan, A Parsee and A Hindoo’ would soon come to frame how the labourers were seen and positioned within nineteenth-century British Empire.

Legacies of the ‘Hesperus’

The Guyanese will observe East Indian Arrival Day on May 5, an occasion commemorating the 181st anniversary of the arrival of both Hesperus and Whitby in British Guiana. Although by no means the first time that Indian labourers migrated overseas for plantation work, migration aboard the Hesperus and Whitby marked a distinct break from previous private ventures. It represented the first of many voyages within a centrally organised system of labour, sanctioned and governed by the British parliament. The Hesperus was also at the centre of an Empire-wide debate on the nature of Indian indenture. Newspapers published reports chastising Gladstone’s venture as a revival of the slave trade, while planters and merchants highlighted the role of contracts to define indenture as an exercise in free labour.

A venture that started with the sailing of two ships to British Guiana expanded to a vast network of migration creating Indian diaspora communities across the globe. By the end of the nineteenth century, around 1.3 million Indian indentured labourers had migrated to British colonies like Mauritius, British Guiana, Jamaica, Trinidad, Fiji, St. Lucia, Grenada, St. Vincent, St. Kitts and South Africa, French colonies like Guadeloupe, French Guiana, Réunion and Martinique, Danish St. Croix, and Dutch Suriname. Although far less well-known than trans-Atlantic slavery, the history of Indian indenture highlights the nexus between labour, migration and colonialism, and is crucial in understanding modern notions of servitude.

Purba Hossain is a doctoral candidate in History at the University of Leeds. The recipient of the 2019 RHS Marshall Fellowship, her research project explores the role of Calcutta in mid-nineteenth century global indentured labour networks, which extended from India to British plantation colonies. She has spoken and published widely on the histories of indenture, post-slavery debate and urban Calcutta, including “Protests at the Colonial Capital: Calcutta and the Global Debates on Indenture, 1836–42”, South Asian Studies 33 (2017).

Discover more about the life stories and documents of Indian indentured labourers through ‘Becoming Coolies’, a website resulting from an AHRC-funded research project based at the Universities of Edinburgh and Leeds here, here and in Reshaad Durgahee’s short film, “The Indentured Archipelago” (2016).