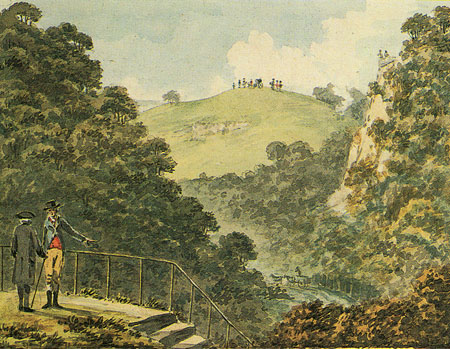 Why do we study the past? One reason is to understand the present, and how the things we think of as ‘normal’ developed out of very different pasts. At a time of mounting concern about the state of the environment, Tom Williamson argues that understanding the historical nature of nature is of critical importance.

In England, as elsewhere in Europe, nature conservation has traditionally focused on ‘semi-natural habitats’ – woods, heaths, moors, meadows and the like. Within such areas, particular forms of management, practised over long periods of time, created particular suites of species. Heaths, for example, are treeless environments associated with poor, acid soils, which boast a distinctive vegetation dominated by heather, gorse and broom, and a fauna which includes such species as the adder and the Dartford warbler. They are essentially artificial environments: most if not all developed from woodland, often in remote antiquity but sometimes as late as the sixteenth century. As trees died or were felled regeneration was prevented by grazing and by exploitation for fuel, with gorse, broom, heather all being harvested for firing.

Conversely, most heaths which escaped enclosure, ‘improvement’ or the attentions of the Forestry Commission gradually became colonised by secondary woodland during the last century, as the intensity of management declined. Heaths are not alone in exhibiting such signs of neglect and change. Other semi-natural habitats, such as ancient woods and meadows, have likewise been rendered redundant by industrialisation and modern farming methods – with serious impacts on wildlife.

“Cervus elaphus in the new wilderness”. Oostvaardersplassen, Netherlands. Image Credit: Alias 0591 via Flickr. Made available with a CC-BY 2.0 License.

Some conservationists believe that the best way of sustaining nature in England is to perpetuate some version of traditional management in these habitats. Meadows should be cut for hay, heaths and downland regularly grazed, ancient woods coppiced. But some now embrace a new fashion for ‘re-wilding’, that is, the creation of tracts of land in which human influence is minimised or removed, an approach which has been put into practise at Oostvaardersplassen in the Netherlands, and at Ennerdale in Cumbria and on the Knepp estate in Sussex. Human intervention is ended, key predators like the lynx re-introduced, and nature allowed to re-assert itself.

Historians have much to contribute to debates about nature conservation. A knowledge of the past gives us an awareness of how unnatural our landscape is. It also illuminates the character of past management systems, and what precisely they achieved.

Heaths, for example, displayed much variation in the balance between grazing and fuel production, and were sometimes exploited in additional ways. The combination of uses varied from place to place because heaths were integrated into local economies and farming systems. A recent ‘biodiversity audit’ of heaths in the East Anglian Breckland noted an alarming decline in a number of rare species. Surviving heaths in the area are mostly maintained by light sheep grazing, but these species in fact depend on the juxtaposition of areas of stable heather, and areas of regular disturbance. To a historian this is unsurprising – until the nineteenth century the region was characterised by extensive rabbit farms, and much heath was sporadically cultivated as outfield ‘brecks’. For centuries, heaths existed beside areas of regular disturbance. With woods and meadows, moors and downs, ‘traditional’ management similarly needs to be historically informed: we need to know precisely how habitats were managed and thus shaped in the past, if we are to manage them effectively into the future. And that is a job for the historian.

“The Bird Life Of The Breck District”. From Animal Life and the World of Nature; A magazine of Natural History (1902) Credit: Internet Archive

The superiority of rewilding over ‘traditional’ approaches is more often asserted than demonstrated, and on emotional more than scientific grounds – the ‘call of the wild’ seems, to some, more important than biodiversity.  In fact, both historical and ecological studies suggest that landscapes managed on ‘traditional’ lines provide a greater diversity of habitats and niches, at a range of spatial scales, than re-wilded reserves. The highest levels of species diversity are to be found in fine-grained habitat mosaics, with an abundance of edges and juxtapositions, each endlessly disturbed and never reaching equilibrium. Management achieved this, and certainly sustained the particular species which we think of as part of our ‘natural’ inheritance, and which have become culturally important to us – many of which, like the flowers characteristic of meadows, were probably rare in the pre-agricultural landscape.

Historians should also emphasise that re-wilded landscapes could never resemble the natural landscape, in the sense of the grazed woodlands which existed in remote prehistory, before farming. They would contain a great range of animals which have been introduced either accidentally or intentionally over the centuries, including both species of rat, the rabbit, the grey squirrel, fallow deer, muntjac, sika deer, and Chinese water deer. Their flora would boast an even greater range of naturalised species, including invasive ones like rhododendron – an important observation, given that many areas targeted for large-scale re-wilding are in upland districts, where this plant has become a serious problem.

In a sense re-wilded reserves would still be cultural landscapes, holding a dim memory of human actions and desires, from medieval hunting fashions to Victorian gardening fads.

But above all, historians can alert the wider community to how the creation of extensive re-wilded reserves would involve the wholesale disappearance of the historic landscape – of hedges, traditionally managed woodland, ancient field patterns, and landscapes designed by great artists like Lancelot “Capability” Brown or Humphry Repton.

This erasure of the human past is actively welcomed by some enthusiasts precisely because it serves to foster the ‘experience’ of wilderness. All this marks a significant change from the approach of twentieth century conservationists and ecologists like Oliver Rackham, who saw the landscape as an embodiment of both natural and human history, interacting in complex ways.

The really interesting question is why all this is happening now. But that, as they say, is another (and very complex) story. I wonder, what would the great W.G. Hoskins make of it all?

Professor Tom Williamson is a landscape historian and landscape archaeologist, and Professor of History at UEA. His recent research projects have included an AHRC-funded GIS-aided study of Agriculture and the Landscape in Midland England and investigations of the history of tree populations and tree disease in England since 1600. He is currently leading ‘Orchards East’. an HLF-funded project studying the history and ecology of orchards in eastern England (‘Orchards East’). His article “How Natural is Natural? Historical Perspectives on Wildlife and the Environment in Britain“, based on his 2018 Colin Matthew Memorial Lecture (available to watch here) has just been published in Transactions of the Royal Historical Society 29 (2019).