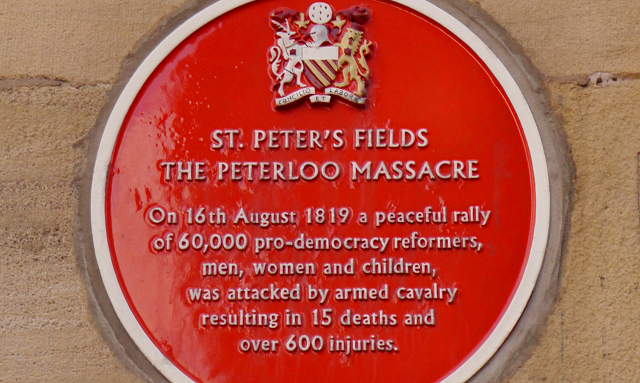 Beyond Peterloo: The Founding of the Manchester Guardian

It is well-known that the events of the Peterloo Massacre, which occurred two hundred years ago today, on 16 August 1819, inspired the founding of the Manchester Guardian. These roots are today still recognised by the Guardian (which the Manchester Guardian would later become). However, a closer look at the original prospectus reveals that despite being founded in the wake Peterloo, the events of 16th August 1819 and the cause of parliamentary reform were not the only motives behind the newspaper’s establishment. In this post, Kathy Davies, a PhD student in History at Sheffield Hallam University, looks more closely at the Manchester Guardian’s long-standing concern with foreign politics.

On 16 August 1819, a large but peaceful demonstration gathered in support of parliamentary reform at St. Peter’s Field, Manchester. The authorities responded to the demonstration with extreme violence, ordering cavalry to charge the crowd, leaving 11 dead and hundreds injured. Following the onslaught St Peter’s Field was said to resemble the battlefields of Waterloo. It became known as the Peterloo Massacre, and its two hundred year anniversary is being marked this year with an extensive programme of events, films and exhibitions. 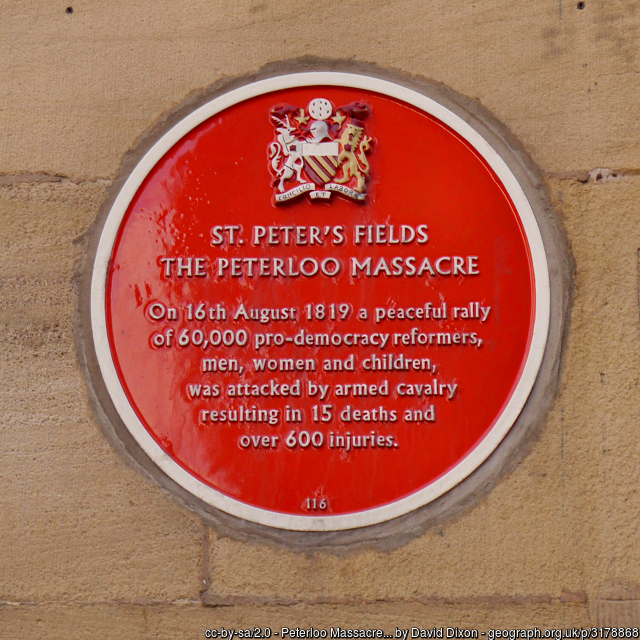 Local cotton merchant, John Edward Taylor, witnessed and reported the Peterloo Massacre and consequently sought to contribute to the reform movement in Manchester in a tangible way. With the support of several other middle-class reformers, Taylor set up the Manchester Guardian newspaper as a mouthpiece for liberal reform politics. The first issue was published on 5 May 1821, almost two years after the Peterloo Massacre, with these principles in mind.

At a time when the global political landscape was turbulently evolving, the Guardian’s founders believed that their audience would be interested in foreign affairs more than ever before. The prospectus stated: “Foreign Politics will now be a subject of anxious observation” and “The Foreign Intelligence of the week will be regularly and succinctly detailed”. The Guardian’s commitment to international concerns was clear. 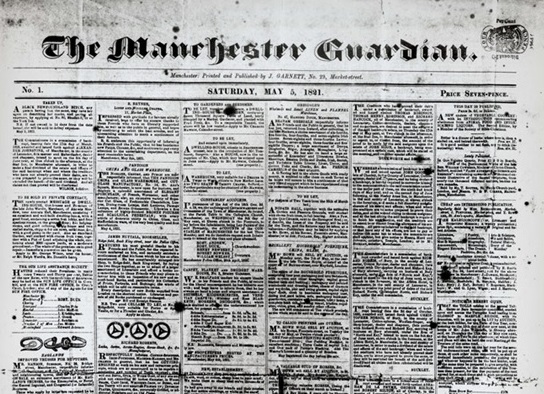 Cover to the first edition of the Manchester Guardian, 5 May 1821.

This commitment advanced under the editorship of Charles Prestwich Scott (1846 – 1932). C. P. Scott was the nephew of the Guardian’s founder, John Edward Taylor, and became editor in 1872. Under Scott’s editorship the Manchester Guardian gained a reputation for taking a strong stance on issues of foreign policy. The Guardian did not just report the news from overseas, but propagated Scott’s political views regarding this news within its pages. 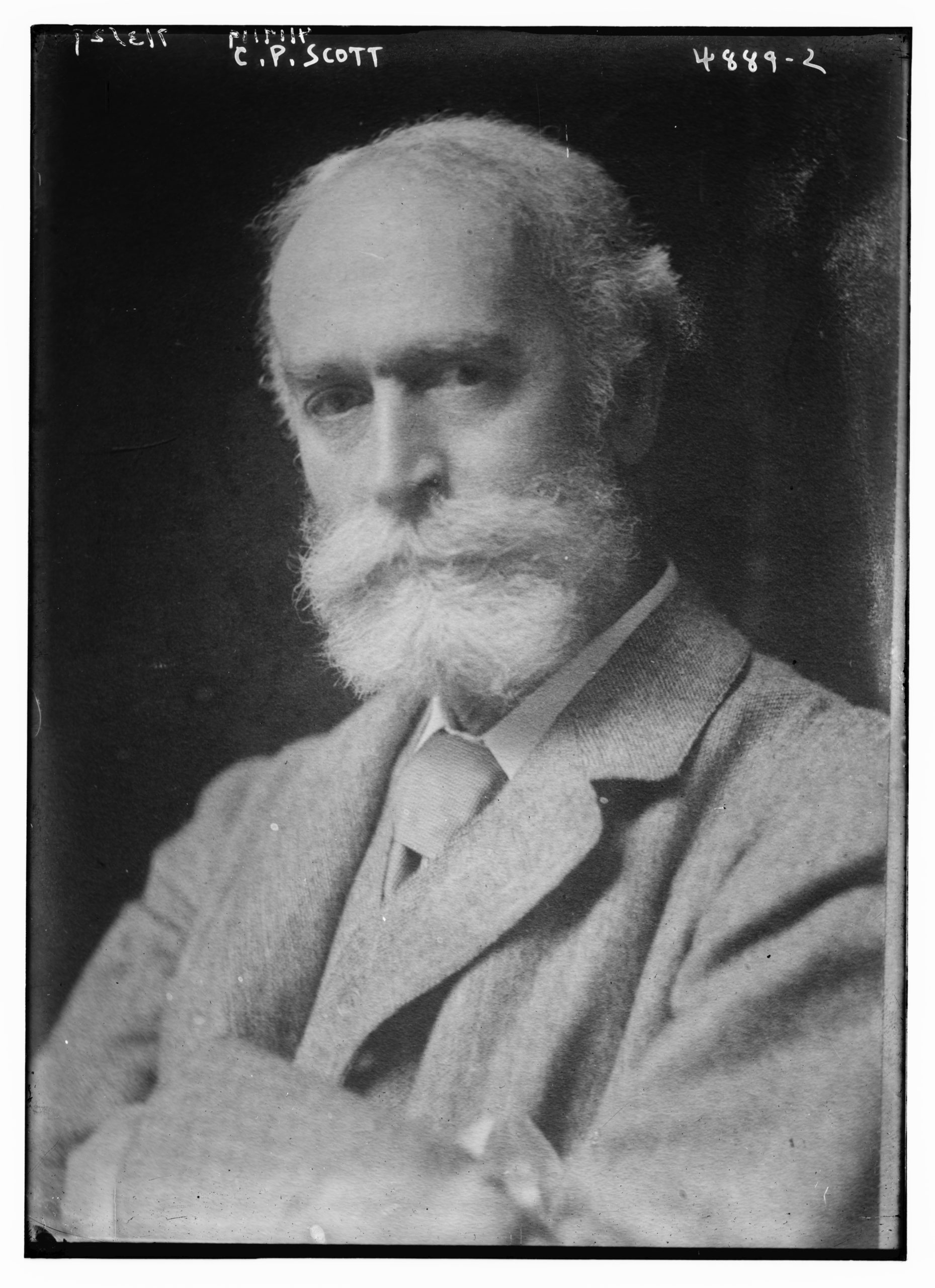 For example, the Guardian became central to the anti-Boer War movement at the turn of the twentieth century. Scott was opposed to the Boer War from the outset and became a key figure in the peace campaign. This was reflected in the pages of the Guardian. The day after the war broke out, it stated:

The peace party retains its right of protesting when and how it thinks best. It holds this war to be an iniquity into which the Empire has been plunged by a course of diplomacy which, if not unscrupulous, has been shown by the event to be grossly incompetent, and it will doubtless say so as occasion arises… those of us who have striven for peace must be prepared as soon as the moment comes to strive for peace again.

For the Guardian, the war was immoral and a result of “unscrupulous” diplomacy at worst, incompetence at best. Months later, it maintained: “We went into this war from motives, which our politicians made a very poor attempt to conceal, of sheer aggression.” (Editorial, Manchester Guardian, 31 January 1900, p. 4.) C. P. Scott’s opposition to the aggressive imperialist objectives of the war, and his desire to influence the British public in favour of peace, was apparent in the newspaper’s editorial columns and his role as a Liberal MP. This position caused discontent among Guardian readers and ultimately had a negative impact on circulation figures. Nevertheless, Scott and the Guardian remained committed to the anti-war stance, and continued reporting both news and views regarding the conflict.

The Manchester Guardian also worked in support of the Irish Home Rule movement from the late nineteenth century through to the Irish War of Independence (1919-1921). The Home Rule movement sought to attain increased self-governance for Ireland within the United Kingdom and the British Empire, and was directed by Irish Parliamentary Party MPs at Westminster. When Unionists in the northern Irish province of Ulster threatened violence to prevent Home Rule in 1912, the Manchester Guardian described the threat as “Treason-Mongering” (Editorial, ‘Treason-Mongering’, Manchester Guardian, 10 January 1912, p. 6.) After the Easter Rising, a six-day rebellion led by Irish radicals against British authority in Dublin in 1916, the Manchester Guardian argued, “the only possible policy remaining which shall restore confidence and confirm loyalty in Ireland is to bring Home Rule… at once in to operation.” (Editorial, ‘The Hope for Ireland’, Manchester Guardian, 29 May 1916, p. 4.)

C.P. Scott believed that Ireland was its own nation with its own people, and thus had a right to a level of political self-determination. By 1918, he had grown frustrated by unwillingness in England to accept this. Scott maintained:

There has been infinite reluctance on the part of this country to recognise that there is such thing as Irish nationality. Yet there it is staring us in the face, as it has stood through all our history, ready even yet to be reconciled, but demanding, and justly demanding with insistence, recognition and remedy.

Scott and the Guardian argued that it was:

the right of every people, and, so far as practicable, of every section of every people, to live its own life and make its own laws free from the domination of any superior power, however strong, however long established. And that, to be sure, is precisely the case of Ireland.

Over the course of the First World War, Irish popular opinion became radicalised. Nationalists turned away from the Irish Parliamentary Party’s moderate policy of Home Rule and towards Sinn Fein, who demanded complete independence for Ireland. The Irish War of Independence commenced in January 1919 under the banner of Sinn Fein republicanism. While the Manchester Guardian did not support the republican cause,  remaining part of the moderate camp, it did continue to demand some level of political self-determination for Ireland. Throughout the War of Independence the Guardian considered Dominion status for Ireland the new solution to the Irish question.

The Guardian covered the events of the War of Independence extensively, particularly the violence which came to characterise the conflict. Press reportage of the war more broadly had a major impact on public opinion in Britain, and consequently influenced government policy on Ireland. The Manchester Guardian welcomed the end of the war in 1921, which concluded with the signing of the Anglo-Irish Treaty and the establishment of the Irish Free State with Dominion status in 1922.

Beyond the Peterloo Massacre and the domestic problems that inspired John Edward Taylor to set up the Manchester Guardian, international concerns were central to the newspaper’s original purpose. This commitment to foreign affairs continued under the editorship of C. P. Scott; most notably the Guardian’s anti-Boer War campaign and constitutional Irish nationalism being the most significant cause adopted by the Guardian during his editorship. The principles outlined in the original prospectus of the Manchester Guardian which pledged to make foreign politics “the subject of anxious observation” continued to underpin the editorial ethos of the newspaper in to the twentieth century.

Katherine Davies is a second year PhD student and Associate Lecturer at Sheffield Hallam University researching the Manchester Guardian and imperial politics in the immediate inter-war years. Katherine completed her MA by Research at Sheffield Hallam University in 2017 with a thesis entitled, ‘British Reactions to Amritsar and Croke Park: Connections and Comparisons’. She can be followed on Twitter: @kathydavies93

Maurice Walsh, The News from Ireland: Foreign Correspondents and the Irish Revolution (London, 2011).