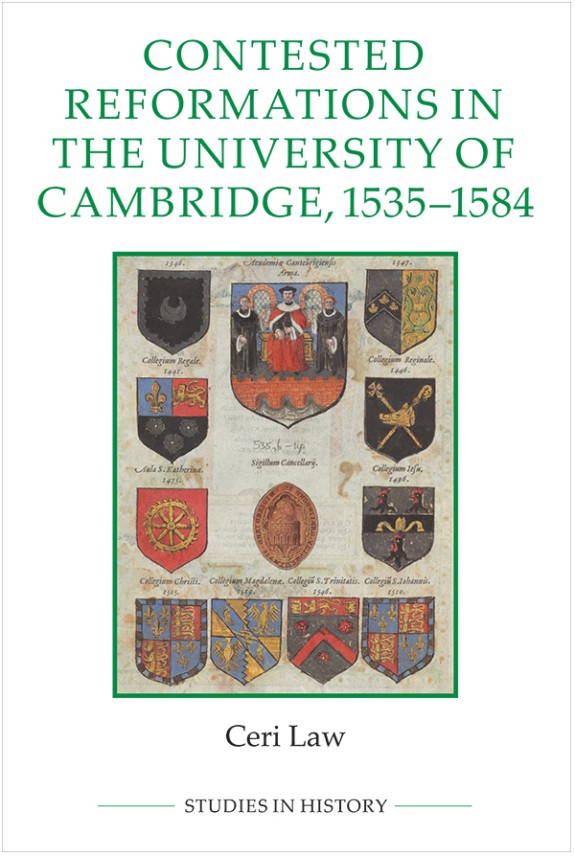 We are delighted to announce the publication of the 100th title in our Studies in History series. Founded by Sir Geoffrey Elton in 1975 and re-launched in 1995, the series established itself as one of the principal publishers of monographs by early-career historians across the full breadth of the discipline and launched the careers of many distinguished historians. After forty years of successful publishing in this form, the Series will be drawing to a close, and the Society has launched a new book series, New Historical Perspectives, offering many exciting features for early-career authors. Here, Ceri Law discusses Studies in History’s 100th title, her new book, Contested Reformations in the University of Cambridge, 1535-1584, published this month by Boydell & Brewer.

In 1557, the University of Cambridge did something rather extraordinary. ‘Encouraged’ by men associated with the regime of the Catholic Mary I (r. 1553-8) they exhumed and burnt two corpses in a pyre in the market place. These two men, Martin Bucer and Paul Fagius, had been celebrated as Protestant heroes when they had died (of natural causes) in the same University just a few years earlier, during the reign of Mary’s half-brother, Edward VI; formal retribution for their treatment in 1557 was made just three years later, soon after the accession of Mary’s other sibling, Elizabeth I. The ‘execution’ of the already-dead for heresy became a famous incident. Elizabethan Protestants laughed at and lamented what they saw as Catholic stupidity and barbarism. But the rapid change in the posthumous fortunes of these men and their treatment by the University – lauded, condemned then lauded again in just a decade – shows the pace and nature of religious change in mid-sixteenth century Cambridge.

It is this change, its implementation and its ramifications that I examine in my book Contested Reformations in the University of Cambridge, 1535-84, published this month by Boydell & Brewer, as part of the Royal Historical Society’s ‘Studies in History’ series. These were, of course, turbulent years not just for this one institution, but for all of England: a quick succession of monarchs with sharply contrasting religious policies meant that churches across the nation were expected to deal with almost constant change in response to official demands. However, this process was all the more pronounced in the University of Cambridge, for this was a particularly closely scrutinised institution. Considered to be both a flagship for ‘true’ religion and a means (through the production of new preachers) for bringing it about, the University was highly valued and closely monitored by these Tudor regimes.

Sometimes, then, when I was writing the book, people would ask me if this made my work topical, in a modern era where the purpose of universities and the extent to which they should be subject to government control is hotly debated. There are certainly resonances, though these were something that emerged rather than was planned in the researching of the book.

However, the ways in which I found myself reflecting on the connections between past and present in my research were not political but personal. For while the book is certainly greatly concerned with policy and its implementation in the sixteenth-century University, it is even more preoccupied with responses to this, and the ways that these were shaped by the social and professional dynamics of this community. Universities were odd and distinct places in the sixteenth century (perhaps even more so than now!), with constantly shifting, all-male and predominantly very young memberships. The collegiate system only emphasised this further, creating small, intimate – and volatile – sub-communities.

Much of the book, then, deals with both conflict and compromise, the ways that, in this strange environment, early modern men and boys both did and didn’t manage to rub along despite religious difference and division. This, then, is where modern academics tend to most instinctively recognise the world I describe; throughout the research process I found people keen to tell me of the ways that friendship, suspicion and personal animosity continue to structure universities as institutions.

This, then, was where the people I studied became both most familiar and most alien to me. The textures of their lives felt recognisable, even if they might share beliefs that made, for instance, the exhumation of a corpse for heresy seem rational and perhaps even reasonable.

Perhaps for this reason, of all the sources I drew upon for the books, from archives across not just Cambridge but the UK, my favourites were those ones that seemed to get me closest to that texture of life: college account books, and wills. In account books I read of the ways in which religious change was physically implemented in Cambridge – altars taken down and up, new forms of worship requiring new books to be purchased – but I also saw glimpses of daily life in these spaces. One of my favourite moments was when I puzzled over a gift of a pike was a weapon or a fish, only to discover that, since it was apparently transported in a ‘tubbe of water’, it must have been the latter. I liked the thought of the two men paid for the task tottering down the narrow streets of Cambridge with that tub.

Wills presented a very different, and far more poignant, sense of insight into the rhythms of life. While I was looking primarily for declarations and indications of shifting religious belief, the wills of university members that I read also revealed much else about their lives: their social networks both within and outside the University, their possessions, even the speed they had to prepare for death. I was moved by one will which in both its short length and its spidery scrawl suggested a testator near death. I was intrigued in a different way by another, in which the maker had lived long enough to update his will upon the accession of Elizabeth I, recognising that his Catholic bequests would no longer do in this new reign which he had – just – lived to see.

The will that struck me most, though, was one in which a young scholar had set out his religious beliefs in great detail. He specified that he had made the will in good health, and it seemed that it was as much an exercise in self-expression and identity-formation as a practical way of allocating his goods. However, he died within a couple of years, and so this will got used, and preserved. Reading it, the youthful self-assertion in it was, again, somehow familiar, despite its situation in a religious, political and cultural world so far from our own. This, then, was what I set out to capture, in some small way, in this book: how religious change in this one, strange institution was shaped not just by political intervention, but the complexities of the individuals that comprised it.