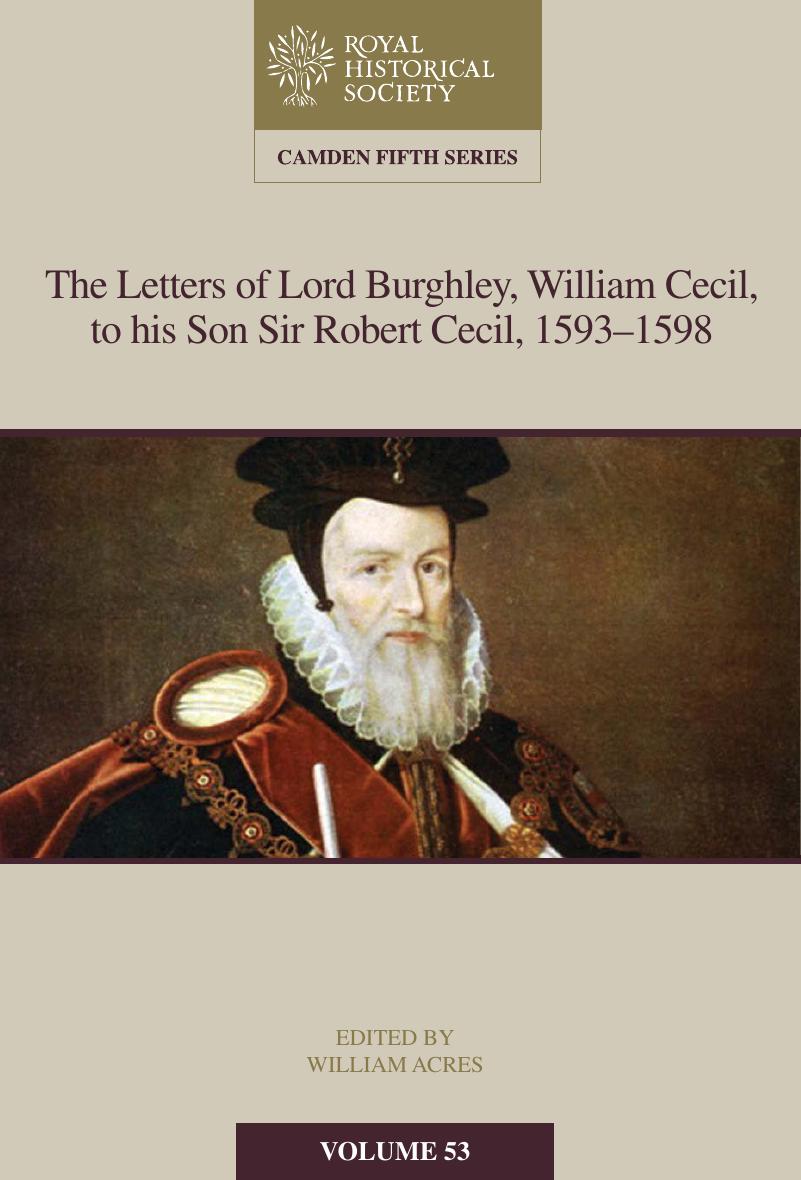 Dr William Acres discusses the volume he has edited on ‘The Letters of Lord Burghley, William Cecil, to his son Sir Robert Cecil, 1593-1598′.

Probably no one left a larger legacy in the Elizabethan State Paper collections than William Cecil, 1st Lord Burghley. He noted and commented on nearly everything he read; his distinctive spiky Italic hand familiar to scholars of the reigns of Edward VI, Mary and, especially, Elizabeth I. The Cecil Manuscripts at Hatfield House, and over a hundred volumes of the Lansdowne Manuscripts bear evidence of his scrutiny. These papers show his unparalleled length of his service to the crown, lasting from 1547 to his death in 1598. Little seems to have escaped his pen particularly as Elizabeth I’s Principal Secretary (to 1572) and Lord Treasurer (1572–98).

My luck was in finding a stray letter-book in Conyers Read’s footnotes in the second volume of his biography of William Cecil during my doctoral work on Robert Cecil’s early career. The nearly 130 letters in Cambridge University Library Manuscript Ee.3.56 map the transfer of family power, from Lord Burghley to Robert Cecil between 1593 and 1598. Perhaps out of naïvete, I imagined this would be a tidy topic suitable for swift completion. The late Patrick Collinson suggested this edition as perhaps a clearer way of seeing this transfer of official power than a monograph. For the Cecils’ power was paper and words; seals and warrants; the almost imperceptible levers of power entrusted to the Principal Secretary. Burghley retained an active role: even after Robert Cecil obtained the Secretary’s place in July 1596. Their working papers were jumbled and passed back and forth between their overburdened secretaries at Burghley House in the Strand and Theobalds in Hertfordshire where Robert Cecil’s chambers were adjacent to his father’s. I explored the letters in my dissertation but began preparing them for publication in the Camden Series in 2013. I was aided greatly by new scholarship on the Cecils’ chief rival, the 2nd earl of Essex, and various aspects of the 1590s. As Collinson suggested, the volume is a ‘spine’ for this immensely complex process.

Burghley’s letters were, in part, meant as performative. They were instruments of family succession, meant to convey an analysis of masses of paper to his son. But their delivery and reception required nearly constant attendance on the Queen, and so the letters are arguments for positions staking out the present needs and future course for her realms. Burghley’s subject matter is fraught with anxiety, particularly with regard to his son’s seeking royal trust. The war in Ireland from 1594 saw rebels funded by Philip II of Spain, with similar advances to major Scottish nobles. Both Cecils’ cast of mind was, by force, ‘British’, wound together by Burghley’s incessant worries about the Queen’s expenditure, vocalized to her and to the Privy Council by his son. Essex, a ghostly presence in these letters, formed a wide circle of disaffected and disenfranchised soldiers, nobles and intellectuals. Essex’s position solidified into claims that the Cecils were the Queen’s ‘evil’ counsel. Burghley’s usually clement response to his former ward’s extravagances had hardened by 1597; the final letters, nearly on his deathbed, are equally trenchant in their repudiation of directing the government’s interests anywhere other than Ireland, a place where Essex’s alliances with the French and Dutch failed to translate into actual aid. The financially strained Exchequer also argued for peace on the continent as France and Spain moved to uneasy alliance from 1595. These matters are the continuous and increasingly acrimonious terrain on which Robert Cecil’s ambitions were realized.

Burghley was rarely seen as vulnerable. But here he gives scholars a rare first-hand account of aging in early modern England. His tenacity endured despite being wracked with pain, unable to see well, walk or even leave his bed, experimenting with diets, attended by physicians. Nonetheless, he was not allowed to retire. The letters are a portrait of physical, but not mental, decline. Burghley’s uncharacteristic ‘morosity’, as a contemporary biographer put it, became dominant in the last five years of his life, and shapes these letters. His concerns for the realms of Ireland and England in an unclear succession fashioned the materials for his son’s official advance. Burghley’s debility, evident in many of these papers, offered the extraordinary opportunity of placing his brilliant son as chief purveyor of news of financial stress and Elizabeth’s isolation in terms of European power, as Spain and France moved toward peace in 1595 and after. True, the materials are leavened by jokes and jests, but these are urgent letters darkened by Burghley’s clear intimations of mortality.

This volume is of interest for not only what it reveals about the daily process of governing in Elizabeth England and the transference of power. This collection is also significant in its own right. It is an archival outlier, separate from the vast collection of the Cecils’ surviving papers. The many moves and accessions which saw it come into the possession of Cambridge University Library are explored in the introduction of this Camden volume. The history of this collection provides insights into antiquarian collecting and the accumulation of documents during the late seventeenth and eighteenth centuries. These letters are therefore important not only for what they contain but also because of their own history.