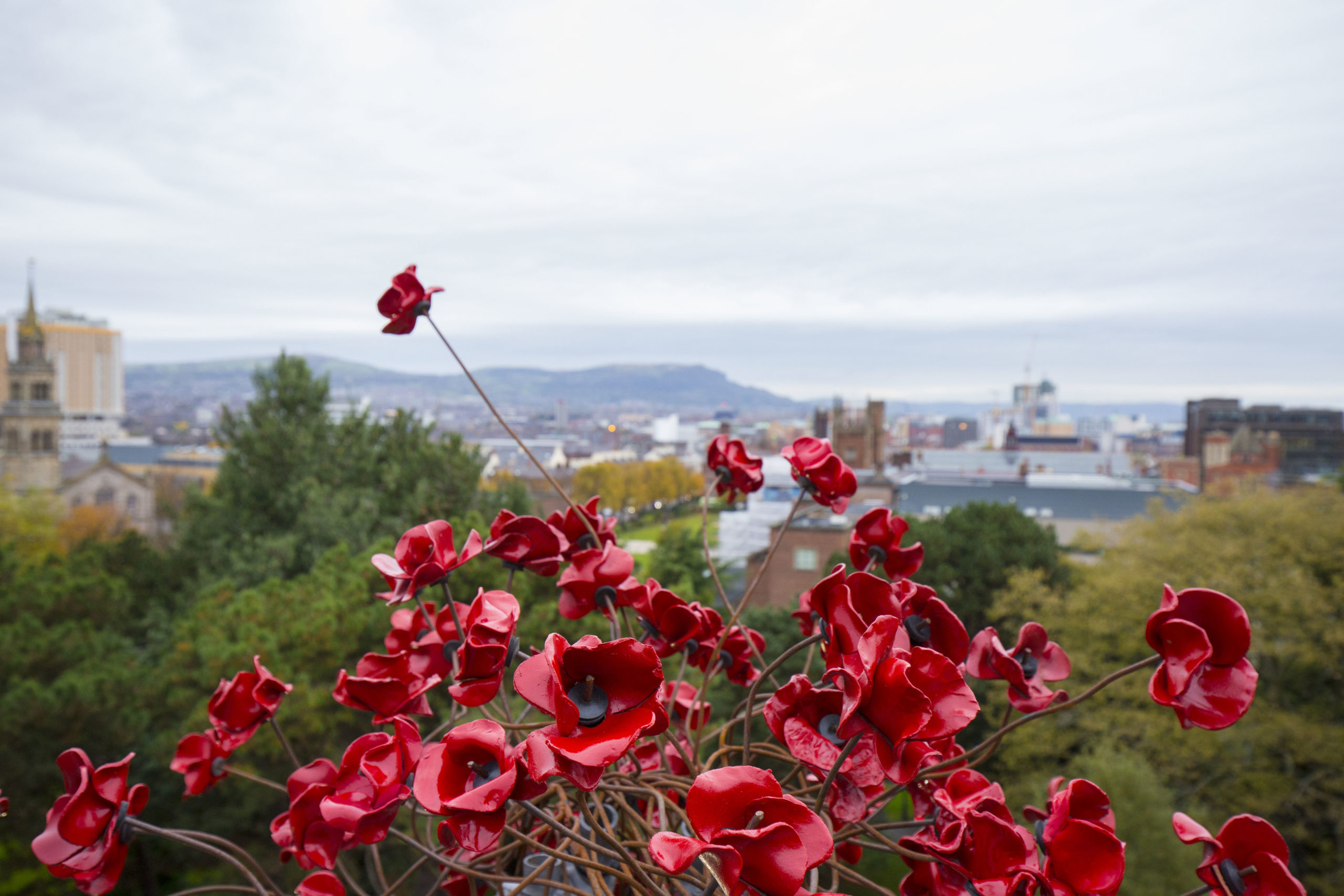 We recently visited Queen’s University Belfast to co-host a symposium on “Teaching & Researching Controversial History”. Ahead of our Public History Prize awards later this month, Dr Olwen Purdue (Director of the QUB Centre for Public History) reflects on the difficulties of approaching controversial public history in Northern Ireland.

In November, just in time for Remembrance Day, Belfast’s Ulster Museum launched ‘Poppies: Weeping Window’, the striking art installation that made its debut on the Tower of London in 2014 to mark the centenary of the start of the First World War. While the hosting of this installation in London, and since then in other English cities, was largely uncontroversial, the presence of 6,000 poppies cascading down the outside wall of the Ulster Museum in Belfast was a different matter entirely. The Twitter reaction on the day of its unveiling was testimony to the strength of feeling – both positive and negative – that it evoked. For in Northern Ireland, as in other divided societies, representations and uses of the past by the public, in public spaces, continue to resonate in the present in powerful and challenging ways. The bold decision made by the Ulster Museum to host the Poppies and the controversy that accompanied it highlights a number of issues around how the past is represented in public spaces but it also raises interesting questions about the role of public history institutions and activities in providing spaces for exploration of shared – and different – histories in divided societies such as Northern Ireland.

History is ‘in public’ in Northern Ireland in powerful ways. There, the past is impossible to escape – references to historic events are painted on walls and houses, flown on flags and memorialised in statues and on plaques. It has also become part of the region’s tourist offering, whether through the world class museum to the Titanic disaster, Titanic Belfast, recently voted the world’s best tourist destination, or through the black cab tours that introduce the visitor to the dark side of the city’s more recent past. The stakes are high for historians in such contexts; they are researching and teaching controversial and contested histories, often with people who have personal or familial experience of violence and intimidation. But we recognise how important these tasks are, which is why Queen’s University Belfast has launched a Centre for Public History, and an MA in Public History. This exciting new venture will provide a forum for debate about history and its audiences at a local, national and global level, exploring and critiquing the ways in which history is presented, understood and consumed, and examining the roles it has to play in today’s world.

As Queen’s becomes the latest UK university to add public history to its postgraduate offerings, there will be those who question the value of this move, and, indeed of public history itself. Is there actually an academic value in ‘public history’ or is it simply a passing fad? Does it represent a ‘dumbing down’ of the discipline? Is it ‘history lite’ or does it have a legitimate and important place on the history curriculum of our universities? If we accept, as I think we should, Ludmilla Jordanova’s definition of public history as being ‘all the means, deliberate and otherwise, through which those who are not professional historians acquire their senses of the past’, then it would seem that we are all, actually, public historians in our own way. Indeed, I would argue that there is an onus on academic historians to engage in that public sphere, to put our historical knowledge, understanding, and skills to work in ways that make better sense of the past and address and shed light on present concerns and issues. ‘Public history’ is an important aspect of the context within which all historians work and therefore can’t be ignored and shouldn’t be dismissed.

As we’re all too aware in Northern Ireland, and as we’ve recently see in the controversy over the Confederate statues that occupy civic spaces in many cities across the southern US, history is all around us and is used in the public domain in a multiplicity of different ways for a variety of purposes. And there are real problems surrounding the ways in which history can be used and abused. Misunderstanding of historical contexts can lead to erroneous and even dangerous assumptions about the past that easily find their way into contemporary civil and political discourse and shape the way people understand the world around them. Past events are frequently called upon and used by individuals and groups to explain and legitimise their positions and their attitudes towards each other, but so often this is in ways that are reductionist, or selective, that pick the particular parts of the historical canon that fit the narrative they embrace, that fail to grasp or engage with more complex and nuanced interpretations of the past.

In this era of fake news and fake history, of issues around nationality and identity and increasing political tensions over what we memorialise and how, particularly in public spaces, I think it is fair to say that there is an imperative on historians to work within the public arena, engaging with public audiences to challenge and disrupt commonly accepted or distorted narratives and encouraging more nuanced and historically thoughtful ways of looking at the present through the lens of the past. It falls upon historians to communicate their work to a range of public audiences for a range of purposes, taking their sophisticated theoretical studies, based on rigorous scholarship, and present them in formats which hare accessible to and accessed by a range of public audiences.

If this is what historians are being called to do as part of their work, there is, therefore, an onus on academic institutions to provide History students – the new generation of historians – with the skills and tools for engaging with a range of public audiences in many different ways, to make them familiar with the multiplicity of ways in which history is put to work in the public sphere, and the challenges associated with this, and to inspire them to engage fully in the public arena. Northern Ireland provides a fascinating context in which to study and explore the way history works in the public sphere. There are specific challenges in representing the history of a place or a people to the general public when the prevailing historical narratives of that public are deeply contested. Working in this context provides an excellent opportunity to explore how we, as public historians, can negotiate these divisions over interpretations. How do different communities understand, represent and engage with their past and why? How do particular public history institutions decide what narrative to adopt? In post-conflict societies, where the past continues to resonate in very real ways, how do we balance the imperatives of exploring and presenting pluralist and inclusive historical narratives with the need to engage with very divisive issues in an honest manner?

Public history in Northern Ireland provides a valuable opportunity to explore the relationship between history, heritage, and community in positive ways, and to engage in the exploration of historical narratives that unite rather than divide. And, as we have seen in the decision of the National Museum of Northern Ireland to host the Poppies installation at the Ulster Museum, and to provide the means through which visitors can engage in discussion about their responses to it, public history institutions and practitioners are redefining the role they have to play in encouraging dialogue, discussion, even dissension, and in providing spaces wherein difficult and conflicting senses of the past can be explored in new and challenging ways. The current work being carried out on the new Troubles galleries which will replace the old two-dimensional monochrome gallery with objects, artefacts, oral histories, and community input, and which will provide spaces to reflect on our shared human experience of conflict, is taking an even bolder step in redefining the role of the museum in a post-conflict context.

Northern Ireland brings its own set of challenges in terms of engaging in public history, but it also demonstrates the importance of engaging with understandings of the past in the public sphere. In an age of increasing political instability and uncertainty over the future, particularly in the wake of the EU referendum and anxiety around the impact that Brexit will have on community and political relations in Northern Ireland, on the island of Ireland and across the UK, and in the light of increasing tensions regarding history and identity in other parts of the world, the role of the public historian becomes even more important. There are challenges around the negotiation of diverse histories in a way that is open and democratic, that places the professional and the public on the same level and says ‘right, let’s explore this together’. There are challenges in representing very difficult pasts in ways that are sensitive and honest and open. But these are approaches to public history that bring incredible opportunities – opportunity to provide space for communities to experience the positive benefits of engagement with history – their own and that of others. And opportunity to see communities not just as the ‘audience’ but as the collaborator and mutual beneficiary of the process of ‘doing history’, engaging with the past in ways that might just help to build a better future.

Dr Olwen Purdue is Director of tbe Centre for Public History at Queen’s University Belfast. You can follow her on Twitter here.