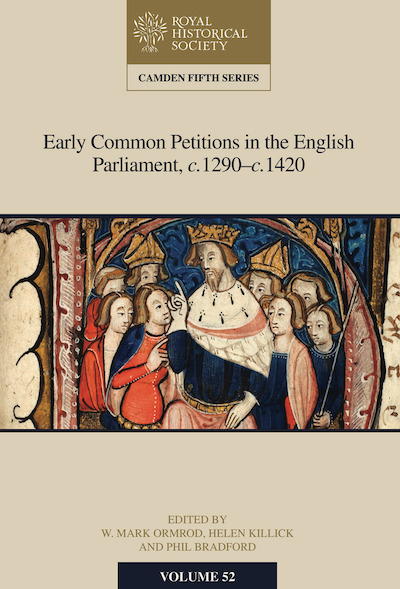 Mark Ormrod of the University of York discusses the volume he has edited with Helen Killick (Reading) and Phil Bradford (York), Early Common Petitions in the English Parliament, c.1290-1420.

In May 1322 the Commons, assembled in Parliament at York, complained to the king and his council about unscrupulous traders who had taken advantage of the presence of the king’s household in the city to push up the price of meat, fish and other foods. The result, they said, was that they had to pay triple what one would normally spend on basic provisions in the local markets. No doubt MPs were aware that their expense accounts, paid by their constituents at a fixed per diem rate, were not going as far as they hoped.

This glimpse of everyday business in Parliament comes down to us because the petition in which the complaint was registered happens to survive in The National Archives. Historians chiefly remember the York Parliament of May 1322 as a moment of high political drama, in which King Edward II took his bloody revenge on the barons and gentry who had supported the recent unsuccessful rebellion of his cousin, Thomas, Earl of Lancaster. Because no official record survives for the assembly, however, it has rarely been appreciated that the Commons at the same assembly also submitted a series of significant petitions calling for reforms of the law and the better regulation of the economy. Even in the extraordinary and adverse circumstances of 1322, Parliament’s function as a talking-shop for the great affairs of the realm and a sounding board for the wider public concerns of the political community was actively acknowledged and observed.

The emergence of the so-called ‘common petition’ was a long and complicated process. The earliest parliamentary petitions expressing the collective anxieties of the realm date from the 1290s. During that and the subsequent two decades, it was the Lords, rather than the Commons, who tended to take the lead in articulating demands for reform in Parliament. Not least of the consequences of Edward II’s purge of the baronage in 1322, was that the Commons then took up the process and became the main spokespersons for the king’s subjects at large. From the 1340s, a fair copy was made on the official record of each assembly, the so-called parliament roll, of the common petitions submitted to and answered by the king and council.

Before 1340, there survives a series of originals of individual or multiple petitions submitted in the name of the ‘commonalty of the realm’, ‘the people’ or the ‘poor commons’ that serve, as in our example from 1322, to compensate for the absence of a parliament roll or of a section on that roll assigned to common petitions. After 1340, moreover, there are number of such original petitions that, for various reasons, were not included among the common petitions written up on the parliament rolls: because the matters raised were beyond remedy; because they were already (in the government’s view) adequately addressed in existing legislation; or, indeed, because the relevant issue was deemed too contentious to be taken further. Comparatively little attention has been paid to this body of material, mainly because it is scattered randomly over a number of series in The National Archives. Now, for the first time, a group of such documents, covering the period c. 1290–c. 1420, have been identified and brought together in a volume that provides critical editions, modern summaries, and historical notes for over 120 single and multiple common petitions.

How do these records alter our view of the petitioning process, and the subject matter of common petitions, in the fourteenth-century English Parliament? First and foremost, they provide firm evidence that petitioning in the name of the commonalty was a more regular practice before the 1340s than has previously been appreciated.

Some 69 instances of common petitions firmly or impressionistically dateable between 1290 and 1340 (including some that appeared on the parliament rolls) are listed in an annotated Appendix to the new study. A number of Parliaments in particular stand out as important occasions for common petitioning: for those held in 1305, 1307, 1309, 1315, 1319, 1322 and 1324, we have a number of single-item petitions and/or multiple-clause petitions that indicate a significant level of petitionary activity in the name of the people of the realm.

Secondly, the new body of evidence helps to define the topics that preoccupied the compilers of common petitions both before and after 1340. A particular concern during the early fourteenth century was the regulation of royal officers, especially sheriffs and forest officials. Basic legal rights and the functioning of the legal system were major issues throughout the period. The special status of the Church and the abuse of privilege by the clergy were also a frequent source of complaint. Trade and the regulation of the economy were matters of particular concern across the century, with much petitioning about the wool and cloth trades, the state of the coinage, royal taxation and its economic effects, weights and measures, quality control and (as with the petition about York in 1322) prices.

The economic problems identified in common petitions were often expressed as matters of real crisis, and are a reminder of the series of natural and man-made disasters – famine, plague and war – that dominated the fourteenth century. In this respect, though, the most striking body of material in the new collection is a series of common petitions addressing the events and consequences of the Peasants’ Revolt. The new documents represent a significantly wider range of concerns and solutions than those that appear on the parliament rolls of the period, and suggest the real difficulties that the Commons had in presenting a coherent strategy for resolving the social, legal and economic tensions exposed in such dramatic form during the summer of 1381.