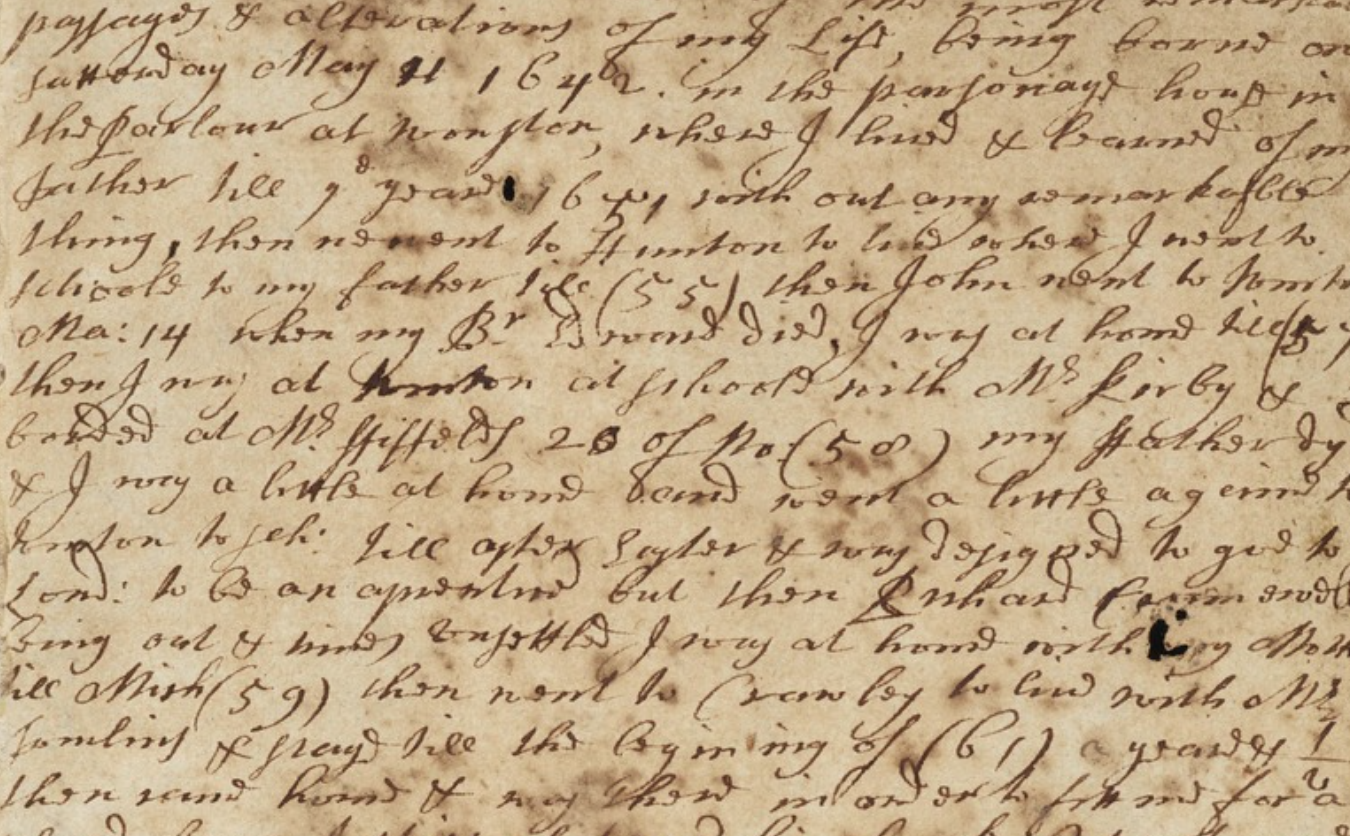 What did people do all day in the seventeenth century?

In his new scholarly edition, The Diary of George Lloyd (1642-1718), Daniel Patterson provides a detailed insight into the ‘everyday’ and ‘ordinary’ in early modern life. Daniel’s new Camden Series volume reclaims the life of George Lloyd, a Hampshire-born customs official active during the late seventeenth and early eighteenth century.

A meticulous record of everyday existence, Lloyd’s diary is little known among historians. What it provides, in this first published edition, is a window on the daily preoccupations of a middling man: from religious worship and social connections to food, dress and selfhood.

Ever since I fell in love with early modern social and cultural history as an undergraduate student, I have occasionally pondered this question. Social historians like to write very boldly about recovering our humbler ancestors from ‘the enormous condescension of posterity’, and have developed all manner of ingenious techniques for drawing back the veil of time and peering into the lives of those who did not write and were not written about. Laudable as it is, we are occasionally all too aware of the pitfalls of this project. One can only recover so much from reading between the lines of court depositions, pauper petitions, and parish registers: they tend to record flashpoints – often dramatic, negative moments – in forgotten lives. Individual people who lived entirely ‘ordinary’, humdrum, uneventful lives, who did not at some point find themselves hauled before a JP at a Quarter Sessions, are perhaps the most elusive of subjects for early modernists.

In this regard, Lloyd’s is comparable to other diaries written by ambitious—or frustrated—socially middling younger men of the seventeenth-century, including the Lancashire shopkeeper Roger Lowe and the more famous Samuel Pepys.

Texts such as the diary of George Lloyd do not offer unfiltered access to the ‘reality’ of daily life in early modern England, but they can, in my view, help to ‘fill in the gaps’ left by traditional archival approaches to the historical study of ‘ordinary people’. George Lloyd was the son of an undistinguished curate and schoolmaster from rural Hampshire, did not receive a university education, and can be placed firmly within the ranks of what historians call the ‘middling sort’. His adolescence was badly disrupted by the upheavals of the late Interregnum and Restoration, and he struggled initially to marry or establish himself in any particular trade or profession. When Lloyd’s diary begins in August 1675, we find its author striking out to establish himself as a schoolmaster in Colchester, and endeavouring to secure a suitable marriage. In this regard, Lloyd’s is comparable to other diaries written by ambitious—or frustrated—socially middling younger men of the seventeenth-century, including the Lancashire shopkeeper Roger Lowe and the more famous Samuel Pepys. 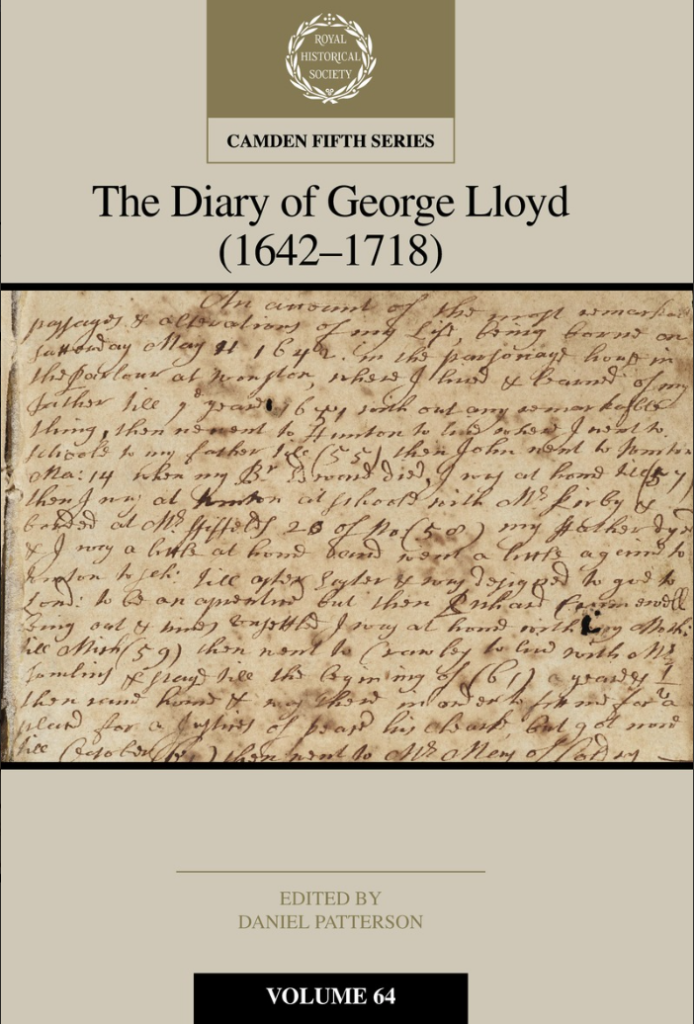 And yet, there is something distinctly different about Lloyd’s diary. Pepys provides his readers with an inimitable kaleidoscope of impressions, jealousies, neuroses, and even gossip. His writing exhibits distinctly fictive qualities, bringing the most vibrant aspects of a given day – people, parties, conflicts – to the fore, achieving a kind of psychological mimesis arguably more reminiscent of a novel than a seventeenth-century diary. In the same vein, the more mundane stuff of life is present, but pushed into the background.

Lloyd, as readers will see, did not have Pepys’s talents as a writer. He could not – or chose not to – distinguish life’s engaging and insightful passages from the mundane and quotidian, and his diary, in all its repetitious inelegance, reflects this. But he did share Pepys’s sheer consistency and his commitment to the idea that almost every moment of his often-unexciting days was somehow worth preserving for posterity. Thus, from the 19 August, 1675, until the 1 February, 1678, we are treated to an account of virtually every event of every day of George Lloyd’s life, with only occasional disruptions, usually during journeys by sea from Colchester to London.

It was a life, rather unsurprisingly, governed by routine: Lloyd rose, performed a series of religious observances, dressed himself, ate breakfast, went out to his school to teach, came home, and so on, day after day after day. Interestingly, his narrative is punctuated by the rigidity of clock-time to an extent that is, to my knowledge, completely unparalleled in seventeenth-century writing; Lloyd scrupulously recorded when he rose, when he ate, when he went to work, when he came home. The result is a narrative that feels oddly rigorous, perhaps even deceptively ‘objective’ – like field notes from a life.

This can sometimes make for jarring reading. As is so often the case in our own lives, the mundane is often interspersed, without ceremony or warning, with the melodramatic. A sample entry will offer a sense of this:

The following morning, Lloyd rose, composed a letter to Ardrey to express his displeasure at his conduct, and proceeded about his day without further comment or incident. What did Lloyd think about these events? Sadly, he never thought to write about that. Lloyd rarely engaged in introspection, or meaningfully expressed his reasons for keeping a diary in the first place. And it ends, abruptly and without comment or explanation, lacking much sense of purpose or resolution.

Lloyd’s diary does not give up its secrets easily. Prior to my doctoral studies, its authorship remained a mystery. It is recorded in the catalogue to the Rawlinson collection as ‘two diaries’; the first ‘of one who had for a time a school at Colchester’ from 1675 to 1678, the second an account ‘of domestic affairs of a person living in London’ in 1711–2. These two texts are bound together in a single tiny volume. William Matthews, in his bibliography of British Diaries, 1442-1942 lists the two diaries separately, suggesting no connection between them, and recording only incidentally that they are to be found at the same shelf mark in the Bodleian catalogue.

Such was the chronological gap between the diaries, and indeed the difference between their respective handwriting styles – the first is an almost impossibly tiny scrawl, the second, a still cramped but altogether more flamboyant hand – that I concluded, with previous commentators, that they were probably the work of two authors. Indeed, the two authors lived very different lives; the first was a schoolteacher and bachelor who struggled to make ends meet in Colchester, the second was a married Customs official and rent-collector who lived an affluent lifestyle in London. But as I worked to read and transcribe the diaries, I came to realise that they were, rather uniquely, the work of a single individual, thirty years apart.

In this respect, Lloyd’s diary demonstrates the potential dynamism of even the most unremarkable of early modern lives, which we are so often forced to glance at, fleetingly, at discrete recorded moments, rather than across the span of years.

Perhaps, on 1 January, 1711, an older George Lloyd happened upon his ‘account of the most remarkable passages and alterations of my life’ – as he had rather pompously entitled it, three decades earlier. Perhaps, he was moved by this discovery, and decided, in a fit of nostalgia, to pick up where he left off. We will never really know, of course, but what we have been left with is another peculiar, often mundane and minute description of the comings and goings of everyday life, albeit in a very different place and time. In this respect, Lloyd’s diary demonstrates the potential dynamism of even the most unremarkable of early modern lives, which we are so often forced to glance at, fleetingly, at discrete recorded moments, rather than across the span of years.

As readers will see, the realisation that the two diaries shared the same author allowed me to piece together a surprisingly full picture of this particular forgotten life. George Lloyd had no impact on the course of capital-H History, and he would have fallen into total obscurity were it not for the accidental survival of his most unusual little diary. I therefore hope that those of you who have, like me, wondered what early modern people really did all day will find something of interest amongst its pages.

Dr Daniel Patterson is a Research Fellow in English Literature at the University of Huddersfield and holds a PhD in History from Queen’s University, Belfast. The Diary of George Lloyd (1642-1718), published by Cambridge University Press, in November 2022, is Daniel’s first book. Daniel’s research interests sit at the intersection of cultural history and literary studies; his primary interests are in the history of ‘the self’ and self-expression, modes of autobiographical narrative, and histories of gender and sexuality. At Huddersfield he has worked most recently on the Leverhulme-funded project, ‘Autobiographical Acts in Seventeenth-century England, Wales, Scotland and New England’.

Read Daniel’s Introduction to The Diary of George Lloyd, 1642-1718, published online and in print by Cambridge University Press.

Daniel’s Camden volume is now available in hardback print and online from Cambridge University Press. Members of the Society may order print copies directly from the Society for £16 per volume or £25 along with the second Camden volume of 2022: Aristocracy, Democracy, and Dictatorship. The Political Papers of the Seventh Marquess of Londonderry, edited by Neil Fleming. To do so, please email administration@royalhistsoc.org.

HEADER IMAGE:  the image, taken from the cover of The Diary of George Lloyd is of an autobiographical summary provided at the beginning of his diary, which is undated. The content very much suggests that it was written in August 1675.

About the RHS Camden Series 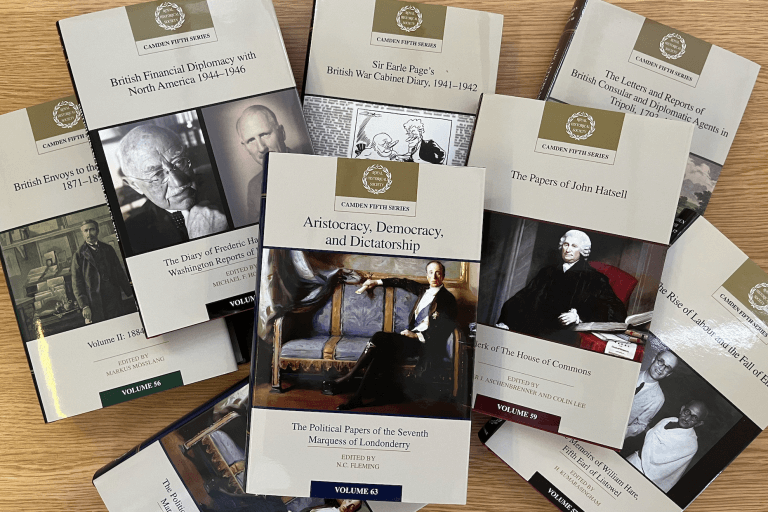 The Royal Historical Society’s Camden Series is one of the most prestigious and important collections of primary source material relating to British History, including the British empire and Britons’ influence overseas. The Society (and its predecessor, the Camden Society) has since 1838 published scholarly editions of sources—making important, previously unpublished, texts available to researchers. Each volume is edited by a specialist historian who provides an expert introduction and commentary.

Today the Society publishes two new Camden volumes each year in association with Cambridge University Press. The series is available via Cambridge Journals Online and full access is available to the Society’s Members and Fellows, as part of new Member benefits from 2022. We welcome proposals for new Camden volumes: for more on how to submit an idea to the editors, please see the Camden Series page of the RHS website.