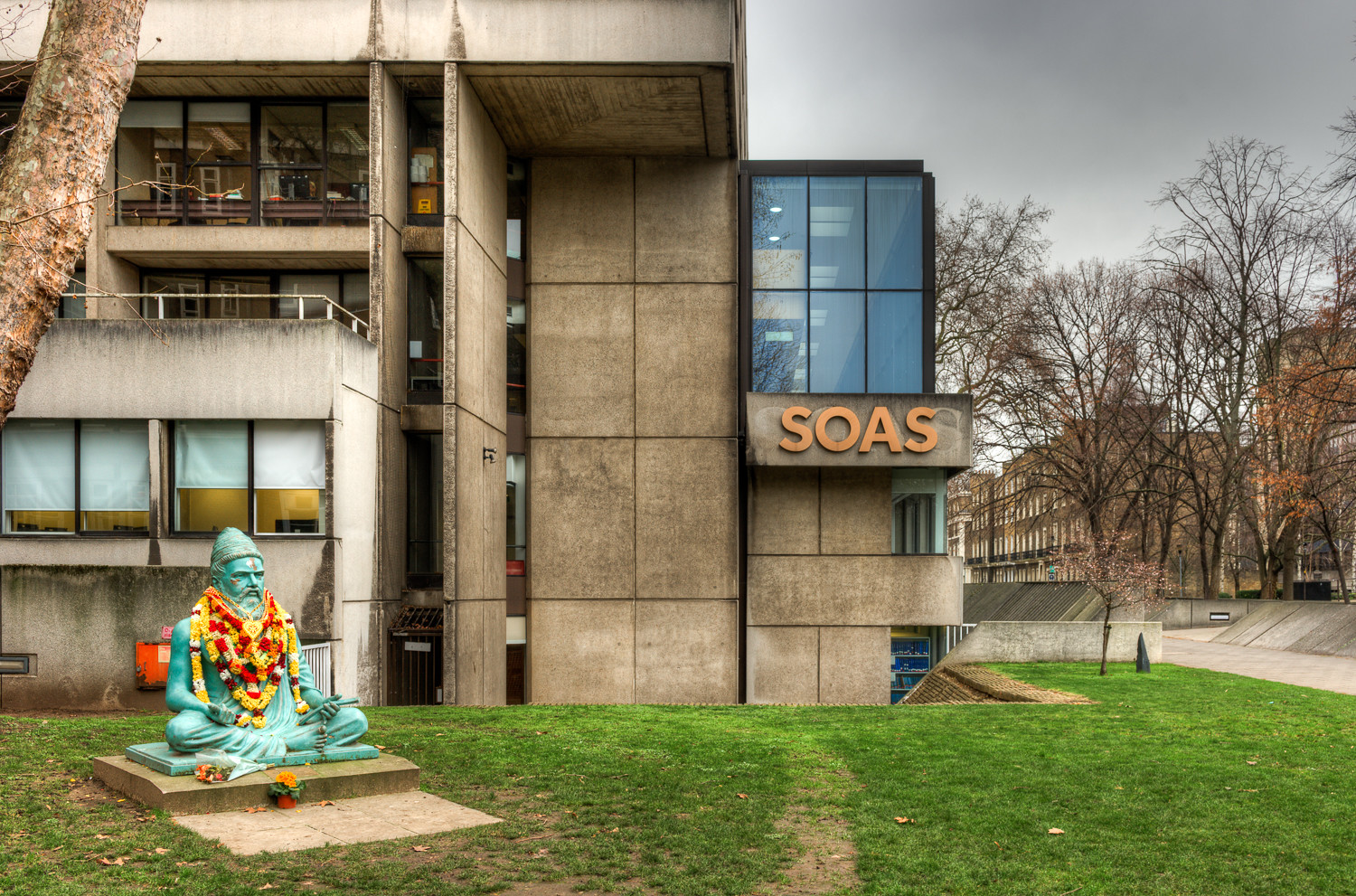 The cohort of students who study History at SOAS is one of the most diverse in the UK but the findings of the RHS’s Race and Equality Report have been highly pertinent to departmental discussions about inclusive pedagogy.

Dr Eleanor Newbigin, Senior Lecturer in the History of Modern South Asia at SOAS, explains how reflecting on the racial dynamics of her own modules and teaching helped her to think about the relationship between academic, personal and community histories in ways that have helped to take history learning outside the classroom into theatres, recording studios and community spaces.

In 2018, the Royal Historical Society’s Race and Equality Report revealed that History and Philosophy were the whitest subjects in the UK. The report’s findings didn’t surprise me, but they did make me pause for thought. On reading the report I wrote to our admissions office for data about the ethnicity of our History student cohort. Again, this data didn’t surprise me: in 2017 over 70% of those studying History at SOAS were students of colour, with the overwhelming majority coming from the UK. While I felt excited by this information I also knew that I, or ‘we’, the department or School, couldn’t take credit for this. SOAS teaches different histories – we focus on the histories of Africa, Asia and the Middle East. This reflects the School’s imperial origins, rather than any deliberate attempt to diversity history; indeed SOAS students have made, and continue to make, powerful calls on the institution to decolonise its teaching and learning. But this too is interesting: what brought students of colour to study at SOAS was not purposeful initiative but the simple fact that the school offered a history programme with a different geographic focus.

While we want to highlight and celebrate our student body, the RHS report has also brought to light the responsibility that colleagues in the SOAS History department have to students who have selected to study with us, in spite of many obstacles. For how can we commend ourselves on bucking the racial data trend, if we don’t actively work to push against what are clearly deep racial barriers in our discipline? I would add here that, the ethnic data for SOAS History staff is much more in line with that of other history departments surveyed in the RHS report. Given this, perhaps it is non-BME members of department staff, who need to engage and learn from our students, rather than the other way round?

“…For how can we commend ourselves on bucking the racial data trend, if we don’t actively work to push against what are clearly deep racial barriers in our discipline?…”

This has certainly been my own experience. Since 2017, I have taught a third year, special subject course looking at the Partition of British India in 1947. The topic sits squarely within my own research expertise but it is not ‘my’ course, it was designed and taught for several years by a colleague: a South Asian woman, employed on a fractional, senior teaching fellow contract. I took over the course when, for family reasons, she applied for a prolonged period of absence. The course has been designed with real creative thinking and care. Rather than providing a top-down survey of the history of partition it explores how the event has been seen by different parties involved (from the political parties that ‘brokered’ the divide to citizens who lived through it). This is read against historiographical debates about Partition to allow students to grasp the politics of history writing. Through source analysis and debate, the class looks at how different understandings of the logic, and outcome, of Partition work to justify and reinforce different political positions and points of view, in South Asia and Britain and the West, today.

In the three academic years that I have taught the class, the majority of students taking it have been of ‘South Asian background’. This euphemistic term, ‘South Asian background’, erases huge diversity: the class has comprised British Pakistanis, British Bangladeshis, British Indians as well as Pakistani and Indian nationals, and American-born South Asian students, on Study Abroad programmes. In contrast, I am white British, born in Britain and trained here. Unsurprisingly, this created a very particular dynamic to class discussions.

The first year that I taught the class produced a series of powerful conversations, inside and outside the class. My relationship with one student was particularly intense. She explained that while she was fascinated by the course, she also found it deeply challenging, not least because of the ways in which the material I was teaching diverged and complicated the narrative of partition and South Asian history she had been taught at home. A class looking at school textbooks about partition in India and Pakistan produced an incredible discussion between students of colour and white British/European students about how they had related, very differently, to the national-focused history they had been taught at school. A British Pakistani student spoke eloquently and movingly about the disconnect between ‘school history’ and the view of the world from home, leading to a fascinating discussion about structural whiteness and the way in which partition is seen as being part of ‘South Asian’ rather than British history. I felt quite nervous managing these emotionally loaded conversations but also realised that these were the moments when I, and the class as a whole, were prompted to think most deeply.

Since the first year of teaching I’ve been trying to create more space for these conversations about personal identity and the history students are learning. I’ve drawn tips from the Decolonise Teaching Toolkit, put together by the Decolonise SOAS Working Group, in particular the idea that I am not the ‘authority’ for the subject I teach but a well-informed ‘curator’ of material that I share with my students in classes from which we all learn. In the summer of 2018 I established a link with London-based theatre company Tamasha, which has been set up to train and connect playwrights and directors of colour. With company director Fin Kennedy we put together a playwright in residence project at SOAS in which 5 women writers of colour joined our programmes (BA and MA) for a term, attending classes and meeting with students. From these experiences they each wrote a 20-minute audio drama that we recorded at SOAS Radio studios. From October-November 2019 we arranged a series of collective listenings, in London, Birmingham and Manchester, inviting audiences to come and listen (with the lights dimmed) to a selection of the plays. These listenings were followed by panel discussions with one of the playwrights, some of our SOAS students and with local activists who were interested in questions of how we teach history in the UK. The dramas, and post-listening talks, are now available to listen to for free and we are using them in SOAS classes. The next stage of the project is to use them to build workshops for A-level students around these themes facilitated, I hope, by some of our own SOAS History students.

While we only completed the ‘listenings’ tour only a few months ago, I feel some of its impacts are already beginning to be felt in our programme, or at least in my classroom! I have found the project has helped me to articulate more clearly the relationship between personal identity, history and, above all, empathy, that I want to explore in the partition class. But the plays have also given students ways to think – away from me and the classroom – about themselves and their own history work. Several years ago, the SOAS History Department brought in the possibility of an alternative dissertation format: students can now make a 20-minute film or podcast (with a 3,000 word essay explaining the project) in place of the 10,000 word essay that is the standard dissertation model. Students are becoming increasingly interested in exploring this option. While this is about much more than the SOAS-Tamasha playwright residency, I hope that this project has helped to inspire students to think differently about both the form and format of their historical research.

Eleanor Newbigin is a senior lecturer in modern South Asian history at SOAS, University of London. She is interested in the histories of citizenship in India, especially during the subcontinent’s independence, and, more recently, in the historical relationship between Empire and university education in Britain and India. Her book The Hindu family and the emergence of modern India: law, citizenship and community was published in 2013. She can be followed on Twitter at @EleanorNewbigin.