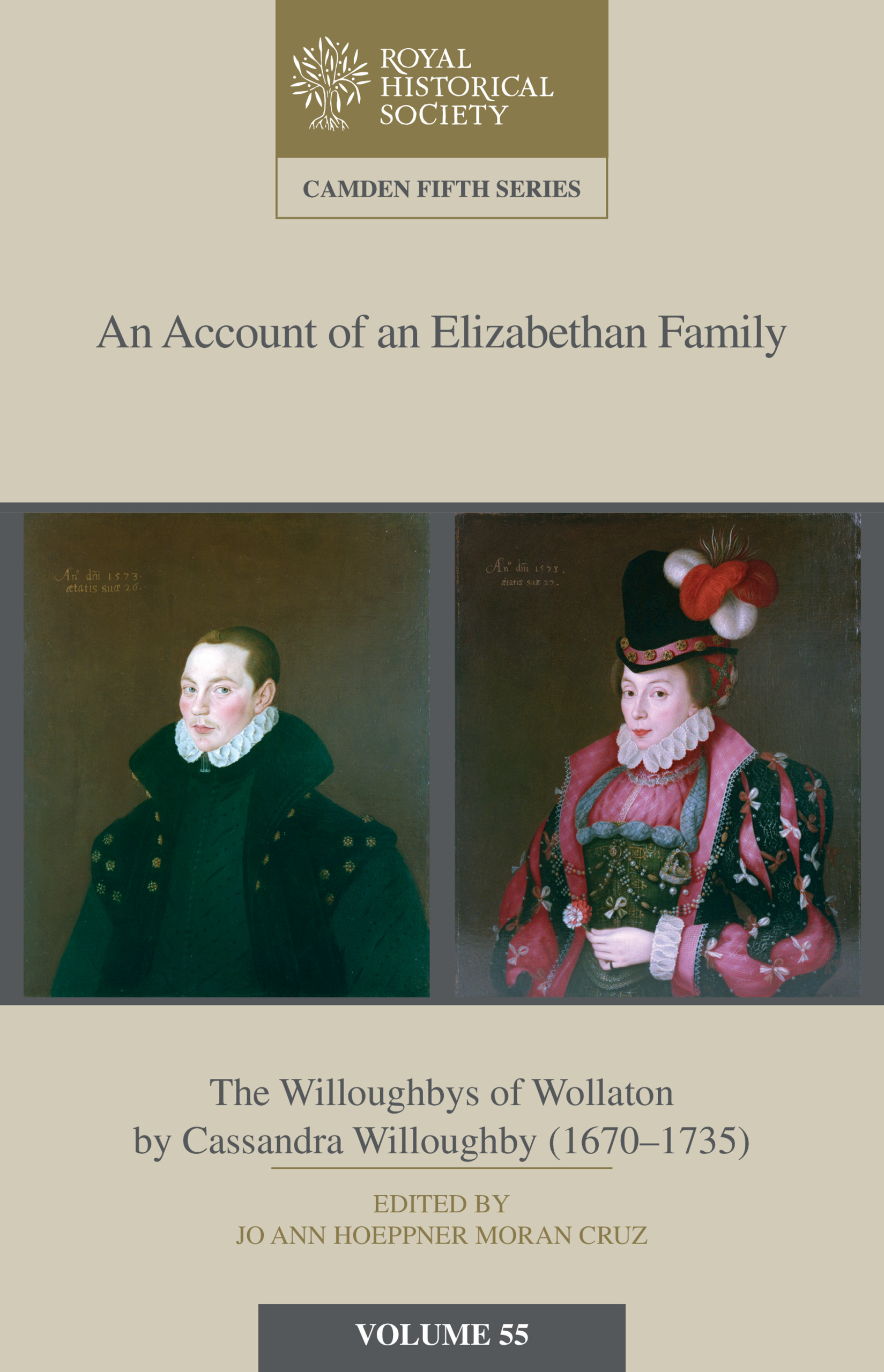 Jo Ann Hoeppner Moran Cruz describes the extraordinary insights into an Elizabethan family provided in her new volume in our Camden Series of edited primary sources, and how she has used its material in undergraduate teaching and for training graduate students.

My new Camden volume, An Account of an Elizabethan Family: The Willoughbys of Wollaton by Cassandra Willoughby (1670–1735), opens a window on Elizabethan marriage, gender and patriarchal expectations. Through an edition of surviving sixteenth-century copies and original letters and accounts from the Middleton family archives, we view intimate details of the marriage of Elizabeth and Francis Willoughby. The marriage was, not to put too fine a point on it, difficult, tempestuous and, in the end, destructive. Among the indignities that Elizabeth Littleton Willoughby suffered were imprisonment in her own home (to be guarded by the servants), an impecunious banishment from her family, ongoing demands for obedience from her husband, and enduring undermining by her sister-in-law. With her reputation at stake, Elizabeth sought support from Queen Elizabeth and stood on the strength of her Littleton family heritage, arguing with her husband that her first allegiance was to the Crown rather than to him. As the introduction concludes, however independent-minded Elizabeth Willoughby tried to be, she could not afford to forego the support of her father, brothers, husband, sons-in-law, or male friends of the family. Her struggles through twelve pregnancies, resulting in six surviving daughters, left her sick in body and ill in spirit. While this edition also continues with details of Francis Willoughby’s hurried and financially disastrous second marriage, as well as with details from the lives of their six daughters, it is Elizabeth Willoughby who steals the show.

The edition tells the Willoughby family story through the pen of a descendant, Cassandra Willoughby, who, in the late seventeenth and early eighteenth century, copied down, synthesized and described letters and accounts of the family from the 1540s forward. The cache of materials from which Cassandra drew her Account was mostly located at Wollaton Hall outside Nottingham, one of the principal residences of the family. The text provides an intimate portrait of a family that was, at times, and perhaps particularly for the women, an unhappy one. Within a patriarchal society, Elizabeth Willoughby, married at age eighteen, essentially failed to flourish, and her six daughters, who often seem to have been as strong-willed as their mother, were left, together with their husbands, to pick up the pieces. 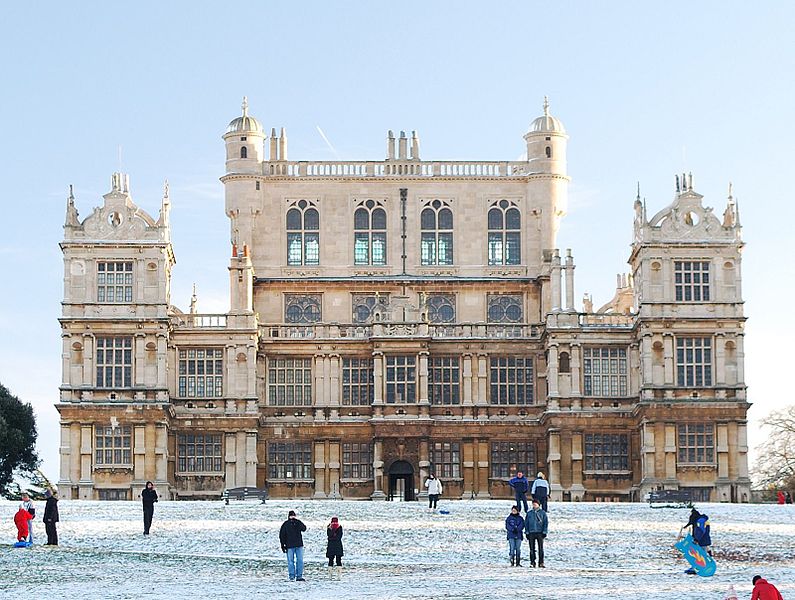 Years back I chanced upon a 1911 Historical Manuscripts Commission volume containing a description of the privately-owned Middleton family archives, which are now kept in the University of Nottingham’s Manuscripts and Special Collections. My initial interest in the Middleton material focused on what the surviving documents could tell us about education in the Tudor period; the surviving materials offer details with regard to books, music, schooling and literacy. Beginning with accounts for primers and other elementary books, Cassandra’s manuscript, together with surviving account books and other materials in the Middleton archives, provide evidence for schooling, the reading interests of the family, the library that they built up, and a culture in which correspondence played a pivotal role. But further exploration of this archive of letters, deeds, marriage settlements, wills, inventories, and other personal and administrative documents, suggested that it would be worthwhile to go beyond these interests to a larger exploration of the family.

The letters in particular, whether written by household staff, corrected by staff, written in the hands of family members or received by them, are fascinating to read and certainly captured the attention of Cassandra Willoughby when, at age 17, she moved into the imposing but neglected family residence of Wollaton Hall. Cassandra’s compilation or Account is written in a clear late seventeenth-century/early eighteenth-century hand, unlike the original letters from the sixteenth century, which she clearly had some difficulty reading. As a consequence, the manuscript itself (or a good copy of it) is an excellent place for scholars to start with the archives and for students to start with a paleographical project. It gives students an initial experience reading a handwritten primary text. Various of the graduate students I have worked with have tried their hand at editing aspects of the material, and this has been valuable training for their own research careers.

I have used the text both at the undergraduate and graduate level where it has been much discussed by undergraduates and has been a mine of information for graduate students who are interested in the experience of women in Elizabethan culture. Undergraduates have read the Account in a course on Women in Medieval and Early Modern England, and also in an undergraduate course on Women and Power in Europe, 800-1600. They read it within a larger contextual understanding of the role of women in late medieval and early modern culture. They may also read it from the perspective of the life of members of the upper-gentry in Elizabethan England. It is a perfect vehicle for teaching undergraduate students about the richness of archival work, the inherent human interest of history, the values of an upper-class Elizabethan family, and specifics with regard to the material life of the time – clothing, travel, food, entertainment, and houses.

Both undergraduate and graduate students are intrigued by the personalities of the writers, the varieties of marriages described in the text, the way wives and daughters were treated and sometimes abused, the agency of the women, the role of Queen Elizabeth and much more. Not only does the text provide insight into the Willoughbys, but it also includes remarks on other family members and neighbours and their marriages. The text is rich in information on the role of servants within the household, including orders for the household staff, wages, personal correspondence, rivalries, gossip, intrigue, and social status. Most recently a graduate student has become interested in the culture of correspondence and has been engaged with the correspondence surrounding the 1587 marriage of Dorothy Willoughby and Henry Hastings. The manuscript tells us something about the religious leanings of particular families and individuals and how they negotiated the boundaries between Catholics and Protestants of various persuasions. It provides extensive examples of land sales, loans and indebtedness (particularly as a consequence of the construction of the new Wollaton Hall) to the point that some members of the family spent time in debtors’ prison. Correspondence with the royal court, particularly with Lord Burghley, and issues rising to a national level, as well as the politics of local authorities and rivalries are embedded in the text.

For those who might want to examine an expanded chronological perspective, the introduction to this volume provides information and sources to explore. For family letters prior to the 1540s, Mary A. Welsh has published Willoughby letters from the first half of the sixteenth century in the Transactions for the Thoroton Society, vol. 24 (1967): 1-98, while A.C. Wood published, in 1958, The Continuation of the History of the Willoughby Family by Cassandra Duchess of Chandos which is the second volume of Cassandra’s Account and takes her family story into the 1690s. Perhaps the best secondary source, that provides an entrée into the family dynamics as well as an in-depth study of the renovation of Wollaton Hall, is Alice Friedman, House and Household in Elizabethan England: Wollaton Hall and the Willoughby Family (Chicago, 1989).

Published with the permission of the present Lord Middleton, this volume makes accessible to a wider audience Casandra Willoughby’s account of her ancestors. It provides not only invaluable insights into the day to day life and tribulations of a prominent Elizabethan family, it also reveals the exceptional character, spirit and misfortunes of Elizabeth Willoughby.